Rogue One: A Star Wars Story robs the Empire — but really steals from the 1977 original

As the first of many stand-alone films slotted to take place in the Star Wars universe without advancing (or rewinding) the main storyline of the Skywalker family, Rogue One: A Star Wars Story has one very challenging question to answer: What exactly makes a stand-alone Star Wars movie a Star Wars movie?

For J.J. Abrams’ franchise reboot last year, entering the Star Wars galaxy meant finding an infectious energy and a great sense of humor within the time-honored theme of underdogs who must rise to an impossible challenge. It also meant recycling and rearranging plot points from Lucas’ original trilogy wholesale, and drafting all three of his main characters back into service.

The latter is a luxury that Rogue One director Gareth Edwards doesn’t have. He does, however, have a kickass female lead (Felicity Jones), a fine international cast, and all the expected visual touchstones. In addition, the screenplay (by Chris Weitz and Tony Gilroy) delivers just enough of that Star Wars feeling, as it tells the story of the rebels who retrieved the secret plans to blow up the Death Star of the 1977 original.

If only Disney and Lucasfilm had been confident enough to stick entirely with its new cast.

The new Star Wars films are obliged to carve out their own personalities and stand, well, alone. But on the evidence of Rogue One, uniquely positioned as the first such vehicle, the producers plan to rely too much on cheap cameos and callbacks. Key to the new Star Wars movies’ success so far is their return to the “lived in” world of Lucas’ first film, largely by way of more practical special effects. Yet Rogue One features a distinctly CGI distraction: revisiting more than a couple of classic 1977 Star Wars characters and resuscitating them 2016-style (rubbery faces, dead eyes). It’s crude and unnecessary in a film that’s otherwise fairly sturdy, if unremarkable. 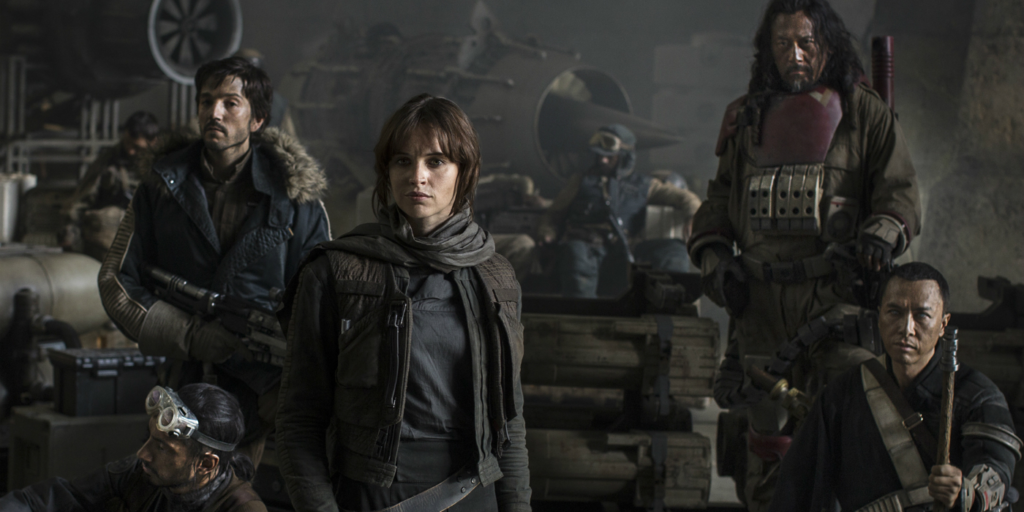 Rogue One’s characters — starting with orphaned Jyn Erso (Jones) and the rebel intelligence operative Cassian Andor (Diego Luna), who breaks Erso out of prison — know about regret. In his first scene, Cassian kills an informer who has given him important information, simply to protect himself. A blind warrior (Hong Kong martial-arts sensation Donnie Yen) and an assassin (Chinese actor-director Jiang Wen) join Erso and Cassian to alleviate their own tragic loss of purpose. Even the comic relief is a little darker; the droid K-2SO (voiced by Alan Tudyk) has perfect timing but is very dry and has a morbid sense of humor.

“In this struggle against the Empire, we’ve all done things we’re not proud of,” says Cassian (I’m paraphrasing) in a short but powerful moment that’s the closest thing in the movie to a pre-battle pep talk. “Let’s make sure that counted for something.”

Rogue One’s idea of courage is colored by understanding how impossible the odds are against our scrappy protagonists, and the film’s greatest gift is life-or-death tension — something that most franchise movies can’t muster because audiences expect the studio to keep making, with the same durable characters. This is not a spoiler, because I’m not being specific, but let’s be clear: Freed from the constraints of the Skywalker timeline, the characters of Rogue One can — and should, and do — actually die. This isn’t the only way that Edwards creates danger, but with at least half of the movie’s 130 minutes devoted to action sequences, it’s actually the most effective. 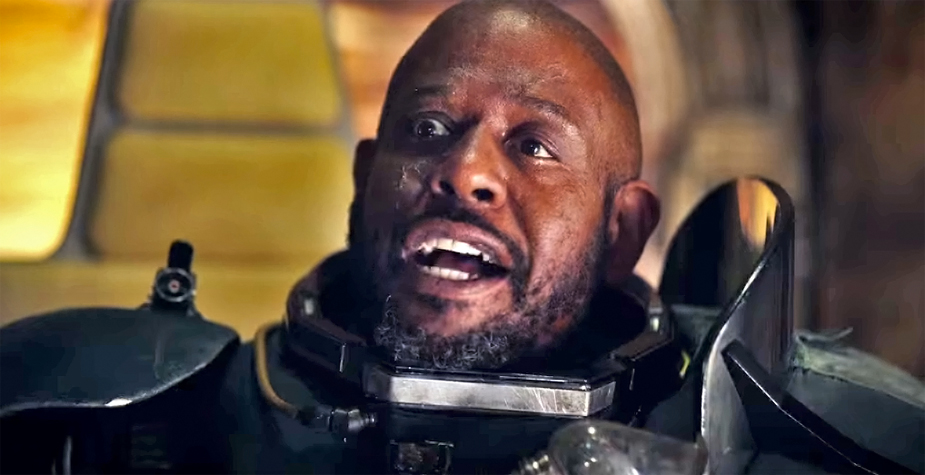 It might have been nice to spend more time with Jyn and her make-do crew — especially the mysterious Saw Gerrera, played by a hammy Forest Whitaker channeling both Battlefield Earth and Blue Velvet’s tank-sniffing Frank Booth. But no! Precious time had to be made for nostalgic callbacks, and the film is the worse for it.

Maybe we should wish for Lucas to go back and digitally tinker with this movie (as he is wont to do). He could remove those ill-fitting CGI resurrections and flesh out more character development with a little — God forbid, in an action film — quiet time. I’m joking, but it would be a great experiment to show the studio that a stand-alone Star Wars film shouldn’t have to lean this much on the past.