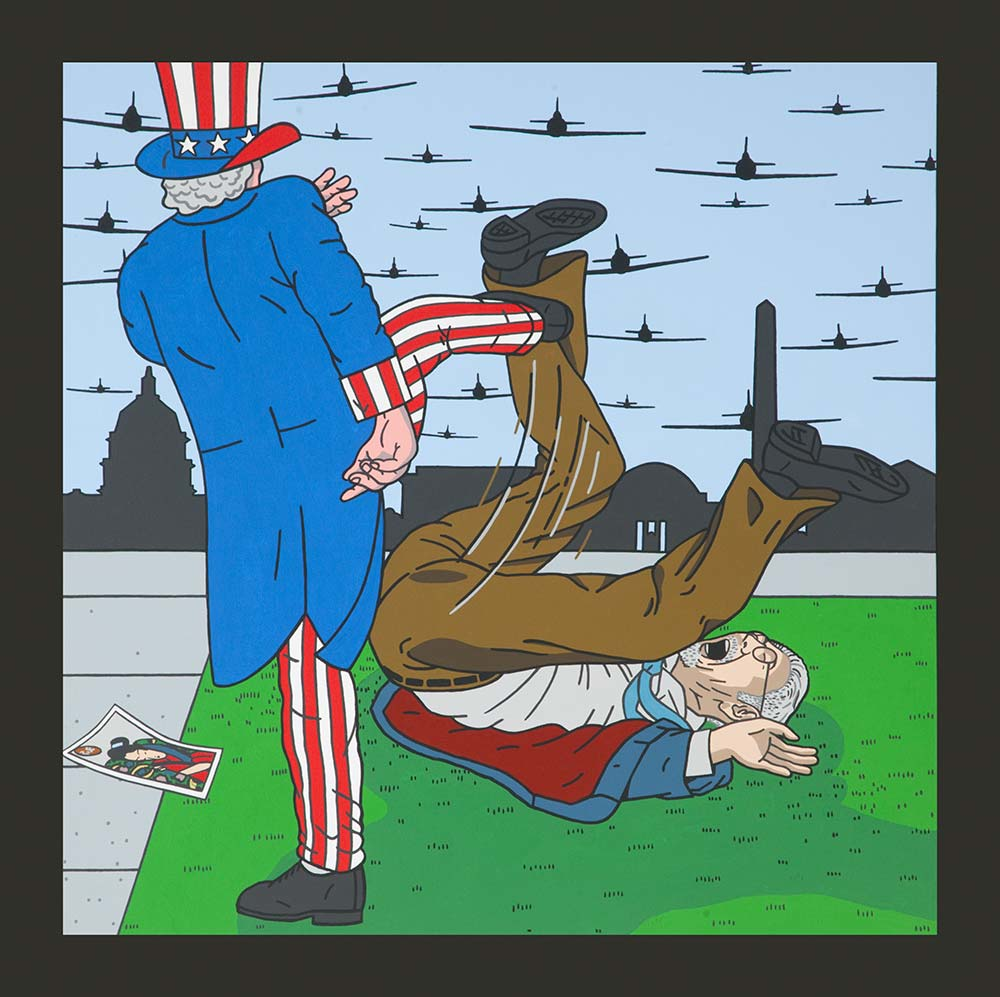 Superman is about to go down. There he is, the man of steel, all primary red and yellow and blue, succumbing to a karate move administered by … a Japanese septuagenarian.

This is what a victory lap looks like for Roger Shimomura, the artist and longtime University of Kansas professor. His “American Vs. American #2,” in which a white-belt Shimomura (the lowest level of karate training) socks the usually invulnerable Superman in the jaw, is among the highlights of An American Knockoff, at the Belger Arts Center. The show pushes traditional Japanese delicacy up against lurid American pop culture, to brilliant effect.

The second-generation U.S. citizen, born in Seattle, was 3 years old when he was sent to Minidoka, an internment camp in Idaho. World War II was on, and his family, like thousands of other families and persons of Japanese descent, was viewed as a hostile presence. An American Knockoff brings a lifetime of post-internment insight to bear on Shimomura’s heritage and the legacy of American prejudice. 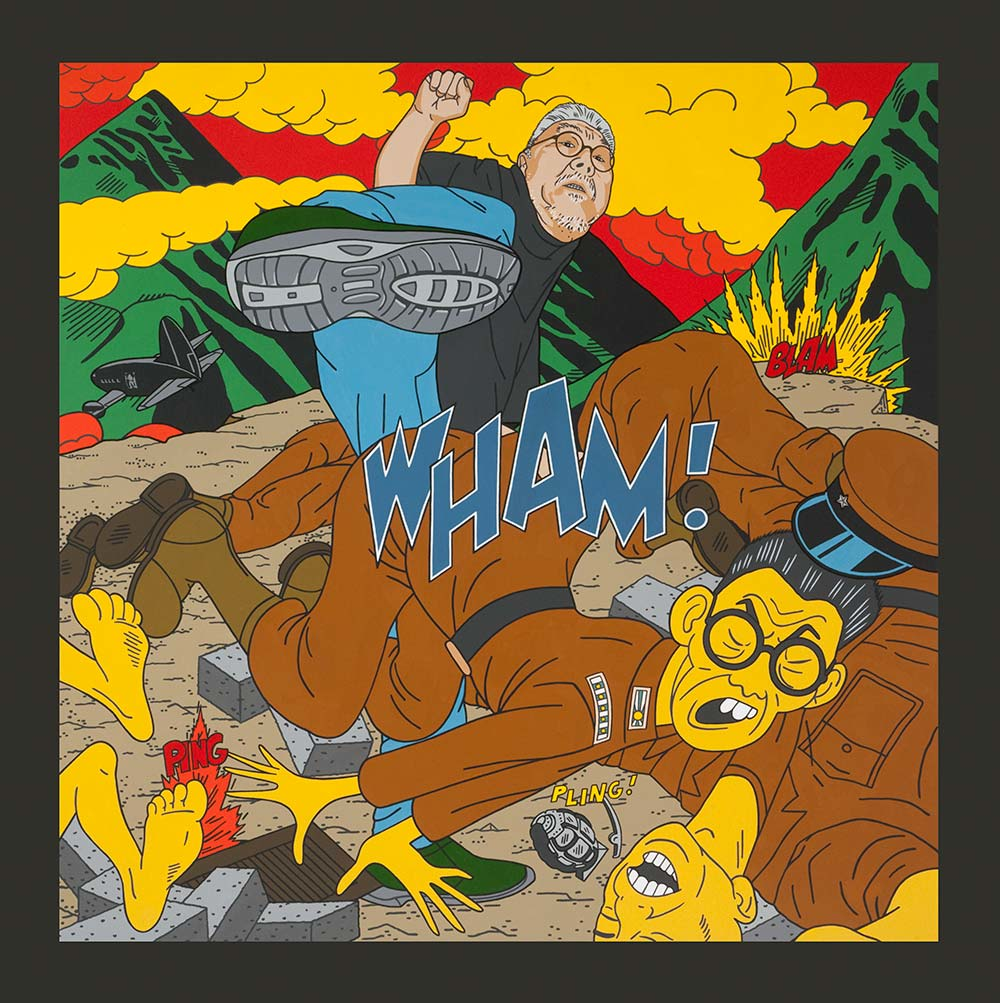 Shimomura’s caricatures of Imperial Japanese soldiers (“Japs,” he calls them in various titles) come loaded with discriminatory features — big ears, yellow skin, buck teeth, eyes that are barely more than a line — that recall the ugly political and popular cartoons of the war. His deliberate contrast of bumbling “Japs” beside more realistic self-portraiture reminds you how forceful and grotesque the anti-Japanese propaganda was when he was a boy. This is what the artist saw directed at him, despite his American birth. He may as well have been staring down Superman.

He fares less well in “American Vs. American #3,” in which Uncle Sam kicks Shimomura to the ground, causing the artist to drop a print of the kind of geisha easily recognized as a symbol for Japanese art. War planes speckle the sky above. The stereotype that all Asian-American men can throw a punch (his stance against Superman is comically unpoised), or that birthplace can be determined on sight, is attacked in these whimsical portraits of the artist as he inserts himself into American tropes. 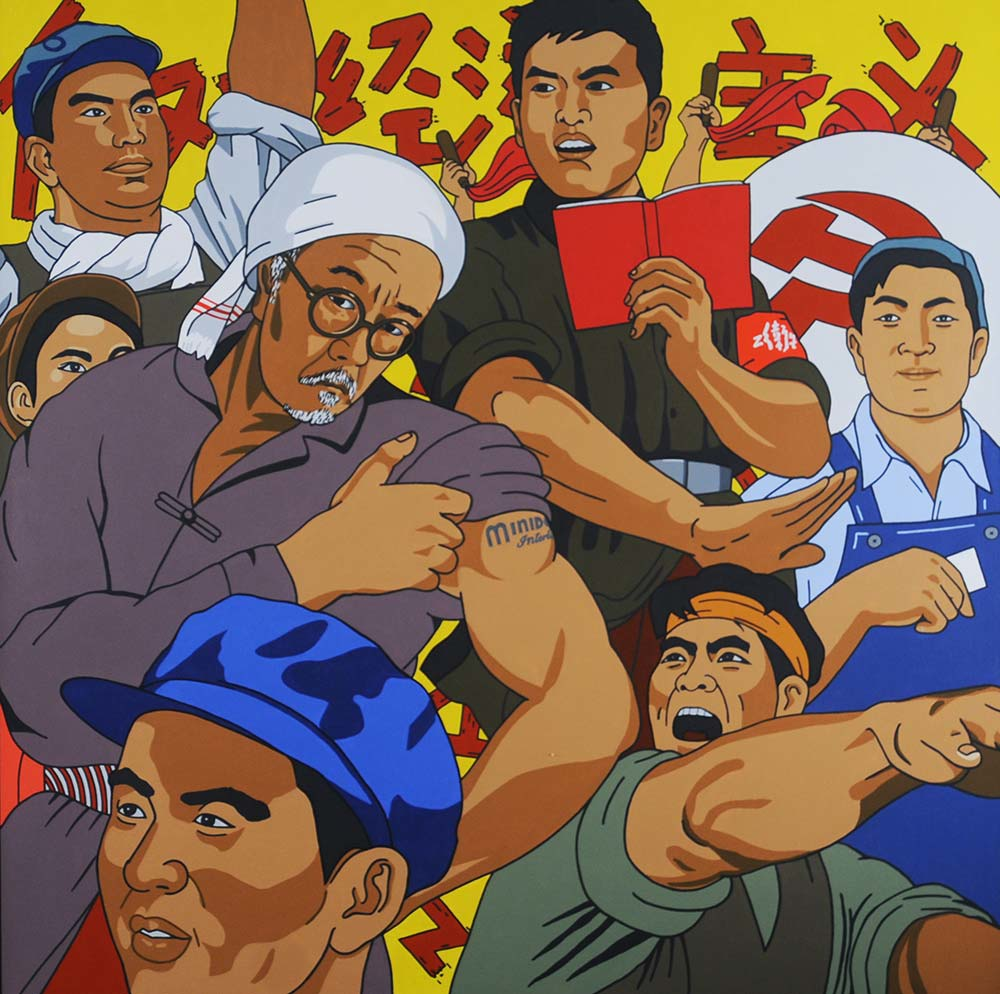 In his titles, Shimomura distinguishes between “Japanese” and “Japs,” with the former represented in the woodblock style of ukiyo-e-era Japan, and the latter those post–Pearl Harbor insults. Shimomura’s roundhouse kicks send the “Japs” flying into their own grenades, the exiting pin accompanied by a derogatory ping! But in the “Japanese” version, Shimomura’s expressive high kick resembles a graceful ballet, as if he were rehearsing for a night of kabuki theater in his street clothes. The opposed styles make plain the conflicting identities he feels within himself.

Amid the humor, though, is “Chinese Imposter #5.” Here, Shimomura casts himself among the working class of the Chinese Communist Revolution. A man holds open a familiar red book and gestures as if saying “resist” above another man in a headband who shouts, “Attack.” The sickle and hammer peek up between red flags of liberation, and Shimomura, who has disguised himself in a jumpsuit and a head wrap, looks out at us, the only one not engaged in the battle for freedom. He lifts up the sleeve of his shirt, and we see ink spelling out the first letters of Minidoka, a reminder of Shimomura’s first, permanent taste of the real world.

Through January 14 at the Belger Arts Center, 2100 Walnut 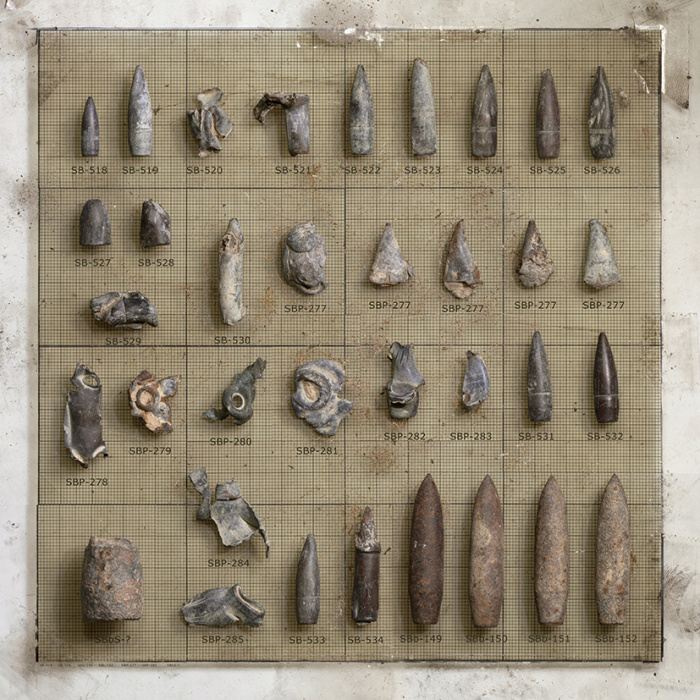 Israeli artist Yuval Yairi was trained as a military surveyor, and he brings to the works in his Epsten Gallery exhibition a highly disciplined sense of remove, even as he depicts the conflicts surrounding his home, Jerusalem. Making himself a documentarian of physical space, he accounts for every stone, every crease in the Judean Desert as he searches for meaning on the face of the land.

The three large desert images in Surveyor share a recurring event: A man travels in a circumference, holding taut a line anchored to the hills. We see this single man in 12 places at once, like the face of a clock or the outer circle around a bull’s-eye. Each photographic map here is overlaid with a faint and subdivided grid, visible as a product of unemotional diligence, simply the recording of a textured landscape. But edges in the images don’t always line up perfectly, much as the individual pieces of a longstanding conflict never balance. 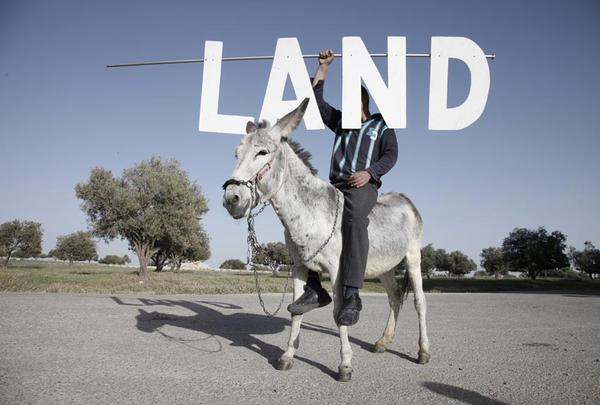 The aerial surveyor is allowed a degree of emotional distance around an area of land that is highly contested. The photographed landscape might appear quiet and still, but the scout must remain wary of stumbling into hostile territory. Yairi’s “Land” photographs and short video performance feature large white letters spelling out LAND. The letters appear at the top of a crumbling structure, inside the bones of a fallen framework in prairie grass, atop a patient mule — places where the size of the word can really be felt. A person carries his or her land, as burden or ornament or target, everywhere.

Yairi plays impassive archaeologist with “Bullet Archive,” which shows bullets dug up from sites of past conflict. Each is labeled — the kind of gun that fired it, the place it was discovered — but none is exactly recognizable. The wear endured after discharge changes these metal shapes to something resembling petrified wood or small bones.

Studio assemblages make up a small but emotional part of the show. A map in the “Codes” series reads “No Fly Zone” and shows a small lens suspended parallel to a textured, moonlike surface, weighted opposite by a plumb bob so that neither touches the ground. In a curious series of still lifes, “Surprise Egg, Codes” shows a glossy egg at rest on a wire-bristle comb, a tethered bullet aimed at the soft flesh of the white. In these pieces and elsewhere in this exhibition, Yairi’s map-centric works, even absent people, reveal the artist as an unusually sensitive and resourceful monitor of human conflict.