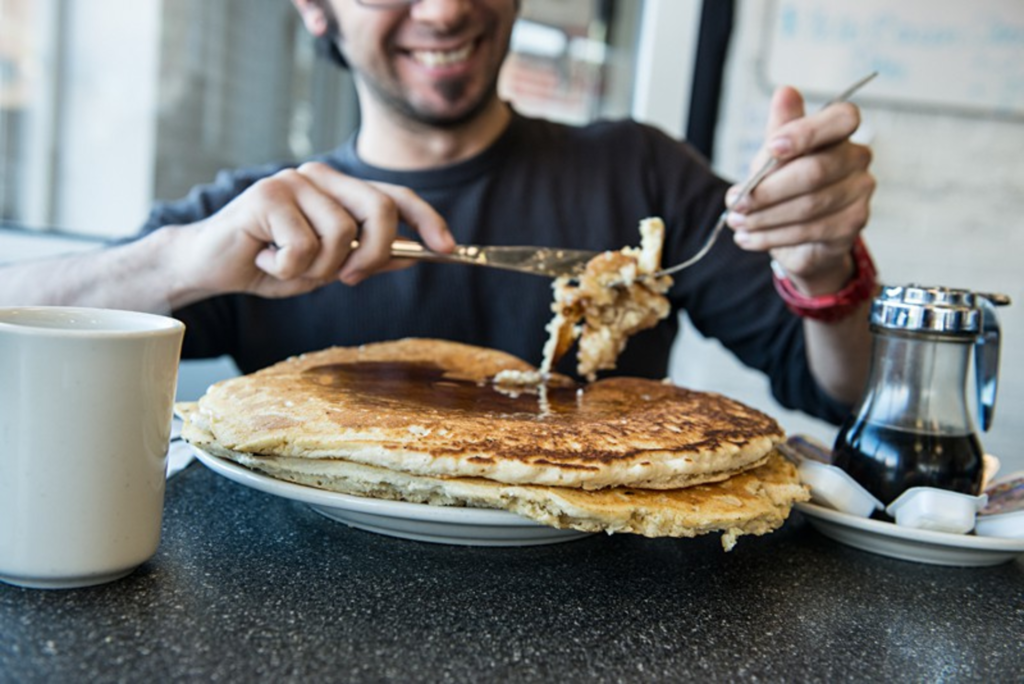 At the River Market’s 76-year-old City Diner, a collection of signatures adorns the walls facing the entrance. Behind a row of regulars cozied up to the bar, hunched over coffee cups, a lattice of Sharpie-scrawled inscriptions surrounds the quintessential greasy spoon’s many pictures of Marilyn Monroe. The resulting vibe is part community pride, part manic graffiti. 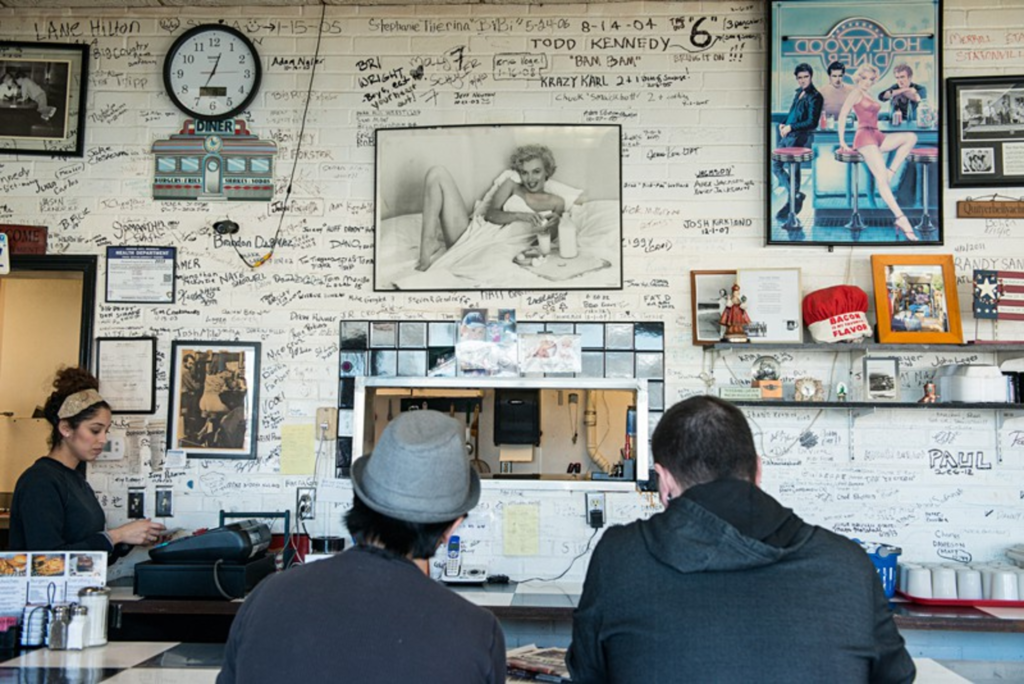 Many of the autographs are smudged or faded, having been subjected to the commotion of the tiny, often crowded space. The collection even includes some celebrities – Gary Sinise, Albert Pujols, Jillian Michaels – but to find them, you have to know where to look. This isn’t the kind of place, though, where people pay attention to big names. No matter who you are, the requirement for signing the wall is the same: You must eat two of the restaurant’s 12-inch buttermilk pancakes. There’s no dignified way to undertake this challenge. Whether you’re a famous actor or a midlevel corporate paper pusher, there’s no greater social equalizer than the giant pancake.

It was with this in mind that I decided to take a run at the 14-year-old breakfast tradition. My boyfriend and I arrived at the City Diner on a Sunday morning during a pre-Chiefs-game rush. We didn’t look at menus. We were on a mission.

“We’d like to eat the pancakes and write our names on the wall,” I told our server after she delivered water and coffee.

“That’s a lot of pancake,” she warned. “If you placed them side by side, they’d hang off the edge of this table.”

She went on to tell us that a woman had come in the previous weekend and eaten seven of the diner’s massive pancakes. The day before, the woman claimed to have eaten 34 hot dogs – bun included.

“And she was normal-sized,” our served added.

If that woman could eat seven pancakes, surely I could eat two. This is the last thought I remember having before the steaming plate arrived. I stretched out my hand and placed it atop the perfectly browned cakes. I could have worn them like a catcher’s mitt.

I considered using a fork but instead chose to rip them apart with my hands. The cakes were delicious – fluffy, warm, slightly sweet – and for the first 10 minutes, I thoroughly enjoyed them. I was, after all, sitting in a crowded, public restaurant, shredding food with my fingers and devouring it with the zesty single-mindedness of a zombie munching flesh.

My confidence peaked when an older woman stopped by to check on us.

“It’s always the skinny ones who make it,” she said, looking at me. “I bet she’ll eat it, and he won’t.” Encouraged, I grabbed a remaining cake on my plate, folded it in half and took a big bite out of the middle.

Then the inevitable happened: I got full. I forced down a few more bites, but my gag reflex was making itself felt. The thought of eating more made my head spin. I was in awe at how quickly something so good could turn into something so … so … horrible. And I still had more than half a cake left.

My boyfriend was still going strong. Soon he was down to only a few bites.

He shoved another spoonful of syrup-drenched pancake mush in his face hole, and I leaned against the wall and giggled. My limbs felt heavy, as though television static was coursing through my veins. A glance down at my pancake remains made my stomach lurch. The effect was similar to getting lost in the house of mirrors after riding that spinning pirate ship at Santa-Cali-Gon Days. I covered my plate with a napkin.

At about 20 minutes in, my boyfriend took his last bite. He had successfully completed the challenge. He gulped a full glass of milk.

Our server handed him a Sharpie along with the bill. After we paid at the register, he signed the wall near the coffee maker. And he left an inscription: “The best bad idea my girlfriend ever had.”

As we trundled through the parking lot, quiet and dazed, a man outside on a cigarette break stopped us.

“Did you eat the pancakes?” he asked.

We told him that we had, and that we didn’t want to look at another pancake for, like, a year.

“Good job,” he said. “That’s impressive. Did you hear about the woman who ate seven?”