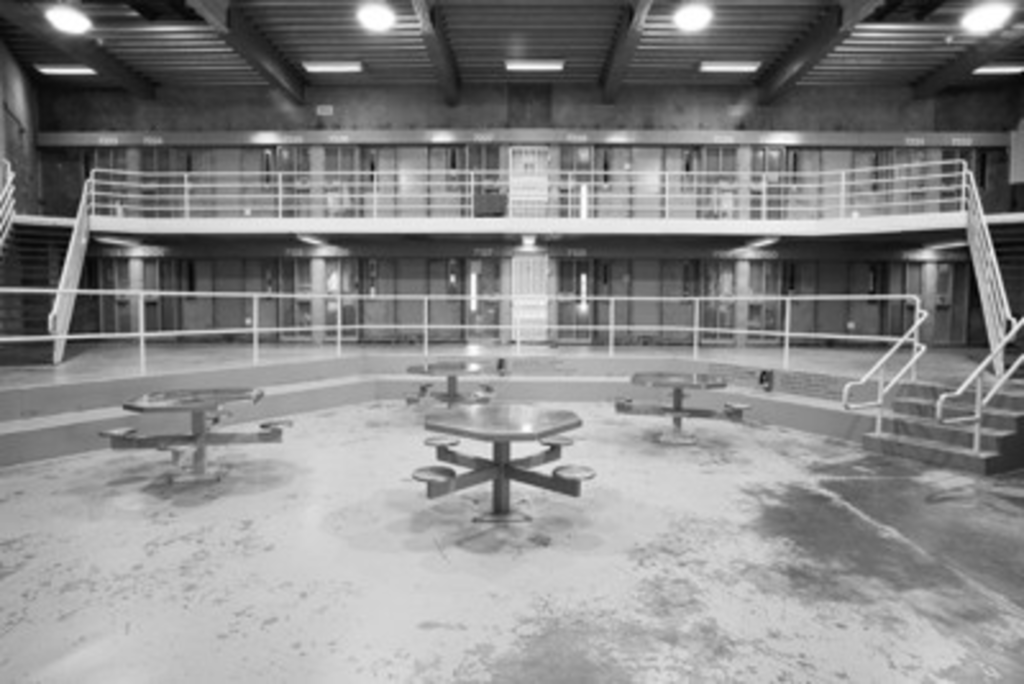 From the abandoned Eastern Penitentiary Historic Site in Philadelphia to the prison yards of Abu Ghraib, Richard Ross photographs areas of containment that governments use to imprison, teach, restrain, question and even execute their people.

Ross is perhaps best known for his Museology series of mounted animals at natural history museums and from the famous Deyrolle Taxidermy Shop in Paris. At the Nerman Museum of Contemporary Art, his Architecture of Authority reminds us that we are not alone — that we’re under surveillance in public places and other spaces designed to organize us, to make us easier to monitor, and to control us. Ross understands how the spaces of authority — schools, prisons, government departments — manipulate a citizenry.

His images span distances of geography as well as history. We can see the work of 18th-century British architect Jeremy Bentham, who invented the “panopticon” — a centralized layout designed for constant supervision of inmates. The panopticon still functions in many civic and governmental sites, as is clear in Ross’ photographs of prison cells, common areas and sequestered rooms.

California’s Pel­ican Bay State Prison — with that paradoxical name eliciting a peaceful nature reserve — is thought to be based on Bentham’s panopticon. Ross’ “Community Room, Security Housing Unit, Pelican Bay State Prison” shows the horrific sense of isolation in the prison. Shot to emphasize the gray concrete, the rows of numbered cells and the silver tables bolted to the floor (with seats attached to the tables so they can’t be weaponized), the panoramic image mimics the panopticon.

“Segregation Cells, Abu Ghraib, Iraq” shows a current yet primitive approach to surveillance. In a disquieting scene of utter desolation, metal cages sit in a row — so they can be watched all at once — in the hot dust, covered with canvas presumably to provide shade and segregation from other prisoners.

By comparison, Brian Ulrich’s Copia is a visual feast (though much less sophisticated). Photographing malls, shops and thrift stores, Ulrich focuses on the abundance that characterizes much of American culture. Both artists’ series emerge from a post-9/11 sensibility, but Ulrich takes his cue from George W. Bush, who urged us to spend money to bolster the faltering economy. Ulrich’s large-scale color prints have the sameness and familiarity of daily living, and not in an interesting way: A shot of the red checkout stations at a Target reveals nothing that we don’t already know. A row of guns in a case also tells us only that they’re available. It’s the thrift-store images that finally spark some visual interest: This cacophony of used toys and other goods suggests countless stories.