Rex Hausmann brings his China connection to the Crossroads 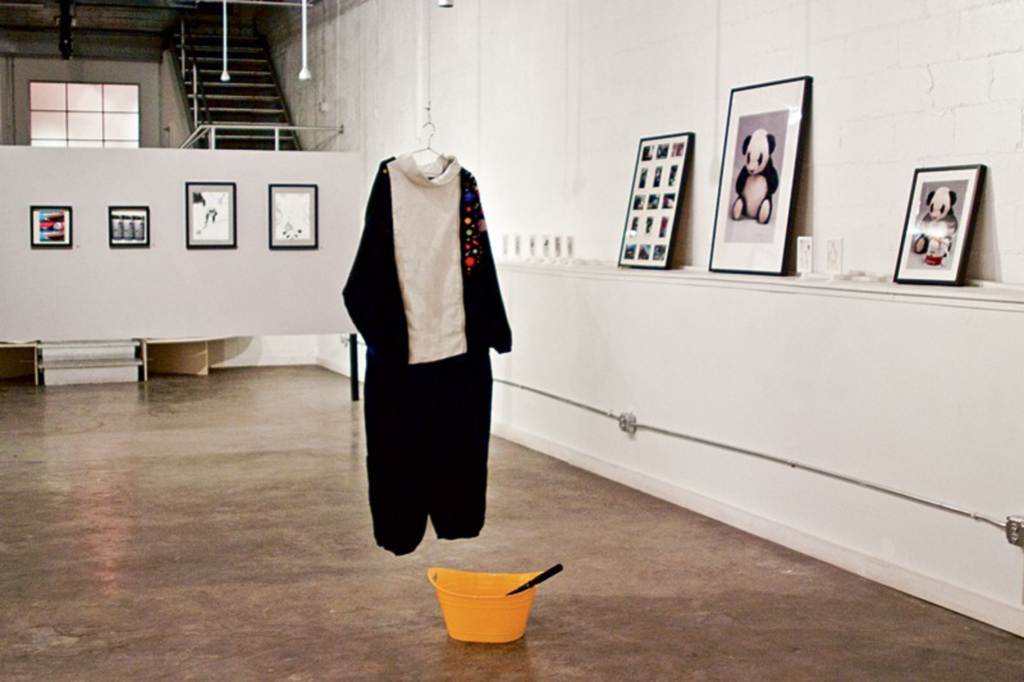 Rex Hausmann wore a homemade panda costume and painted on the floor with water on a sponge-tipped brush during the opening night of his exhibition Universal Language.

The suit, water bucket and brush now share space as the centerpiece to the photographs, paintings and sculptures that fill the center gallery inside Cara and Cabezas Contemporary.

Hausmann, speaking by phone from his San Antonio studio, acknowledges just how goofy his performance that night was.

The creative language he’s talking about is the social interaction taking place when the artist shares the same space as the viewer. And for Hausmann, a big, gregarious guy, goofiness punctuates that language. Sheer silliness — a panda costume, say — might capture a viewer’s attention for the extra instant an artist wants, a moment to pause and think (or at least wonder what’s going on).

Hausmann says the panda is an alter ego. A two-dimensional version of the cartoonlike bear showed up in his drawings one day, he says. The character, which Hausmann named “Bowser Wowser,” was a welcome interruption amid some serious stuff; the artist was dealing with the end of a personal relationship. Bowser Wowser pops up again and again throughout this exhibition, in Hausmann’s often autobiographical, hip-hop- and cartoon-influenced paintings; journal-like sketches; snapshots and staged photographs.

Hausmann believes in the power of art to change lives. Even a short conversation with him is likely to yield enthusiastically unironic talk about building bridges between people and cultures. He is no less willing to appear earnest in his work — hence, his opening-night water-painting performance, which re-created his own experience of art overcoming boundaries.

When traveling in Beijing last fall, Hausmann saw a group of older men drawing on the ground with water, practicing their calligraphy.

“Can I do that?” Hausmann asked his translator, who immediately discouraged him. In Chinese culture, the translator explained, it’s disrespectful for young people to approach an elder. So instead of joining the other artists, Hausmann whipped out his sketchbook and began drawing them. A member of the group noticed Hausmann and asked to see his drawings.

“I showed him the book, and he immediately lit up,” Hausmann recalls. “He said, ‘Draw me.’ He handed me his brush.”

Hausmann accepted the brush and began drawing on the concrete, a Kodak moment captured by his travel companions, a group of photographers from Texas. Some of those photos are on display in the gallery.

That experience of art bridging gaps — between languages, between ages, between cultures — gives this exhibition its title. And Hausmann says his work, whether performance-based or visual, is rooted in the desire to apply those lessons of exchange to the relationship between artist and audience.

“This 60-year-old dude who has seen the Cultural Revolution, he and I had an immediate friendship because of art,” Hausmann says. “Not because of food, not because of politics — it was art. It was the creative act.”