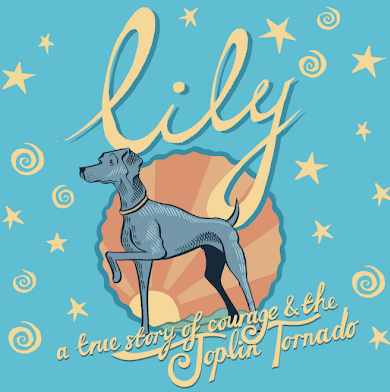 Author and zookeeper at the St. Louis Zoo, Carolyn Mueller, came into contact with Lily and Tara’s story over Facebook. “I was intrigued by this dog, and, of course, I love a good dog story, so I drove out to Joplin and met with Lily and Tara all day,” says Mueller.

“A few months after our meeting, the bombings at the Boston Marathon occurred […] Cities like Aurora, Newtown and Boston began passing around the quote from Mr. Rogers (in the Lily book’s dedication) about ‘finding the helpers’ when tragedy strikes. Reading that quote immediately brought to mind Lily and Tara. I knew then that I had to make this book a reality,” Mueller adds.

Mueller found some helpers of her own while creating the book, including illustrator Nick Hayes who collaborated with the Reedy team from London. According to Mueller, Hayes’ unfamiliarity with tornadoes led him to need clarification on shape and debris but nevertheless portrayed an accurate image of devastation and reconstruction. “I think he did a phenomenal job,” says Mueller. “[The story] ends with a beautiful sunset illustration on the last page, which I think is a really bright and hopeful illustration.”

The softcover release comes from the backdrop of a fire that struck Reedy Press back in 2017. The fire engulfed the publishing company’s collection of works, including Lily: A True Story of Courage & the Joplin Tornado. While not all of the books have been recovered, this release marks a return of Lily and Tara’s legacy—one that becomes all the more important to restore following Lily’s passing in 2017. “I think it means a lot to her and to Lily’s friends because it just kind of helps her legacy to live on, which I think is really special,” says Mueller.

“I mean, we all have that significant dog in our life, that special animal that means a lot to us. And how cool is that for Tara to have the memory of Lily live on through the children’s book.”