Sunlight was still streaming into the Riot Room when Bummer took the stage last night for The Pitch Music Showcase. It made for a surreal set as the Olathe trio, bathed in harsh red stage lights, unleashed a furious fistful of songs on a slender crowd. It’s never easy to be the first band in a big lineup, and doubtlessly 8 p.m. was one of the earliest time slots Bummer has seen in its young career, but the members seemed no more perturbed than usual. 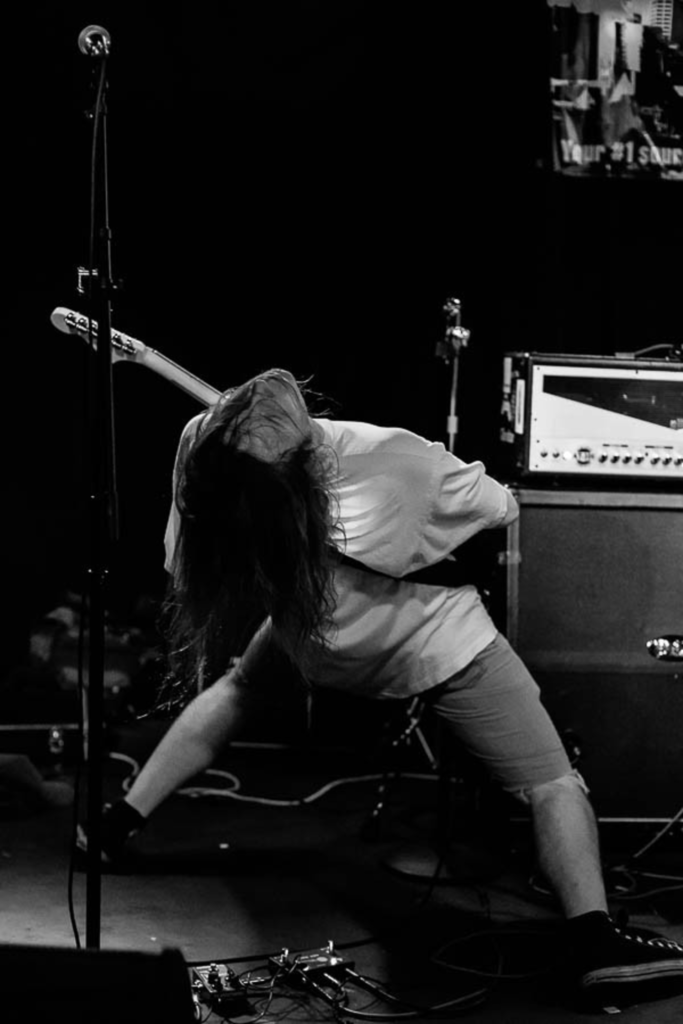 When we spoke to Bummer in May, guitarist and lead singer Matt Perrin revealed that his main goal was to “scare people.” Anyone who has witnessed Bummer play live can attest to this effect, and last night was no exception. In barely half a dozen songs – which bled seamlessly into one another with a testy, impatient energy – Perrin roared into his microphone as his lids slid shut and his hair matted to his forehead and cheeks. He looked like the possessed teenage victim in a horror flick. And Mike Gustafson was like a monster with a bass, his long black hair covering his entire face as his deft fingers flew over his instrument at dangerous speeds. Between these two, drummer Tom Williams looked like a cherub-cheeked innocent.

It would be so easy for Bummer’s music to get lost in teenage angst (Perrin is 19, and Williams is 18), and it’s easy enough to imagine this trio doing significant damage to the peace and quiet of the neighborhood where they practice. The songs themselves rarely push past the three-minute mark, and they flare up and die like ill-advised temper tantrums – particularly “Infinite Witches,” with its growled refrain: Need it, need it, need it now. But the underlying composure in these songs betrays the whole petulant front that Bummer puts out. (“Don’t vote for us,” Perrin warned the crowd before the band left the stage.) Perrin’s thrashing guitar riffs are not impromptu; they are structured and beautifully executed. Bummer wants to be in your nightmares, and the members have planned their music that way. 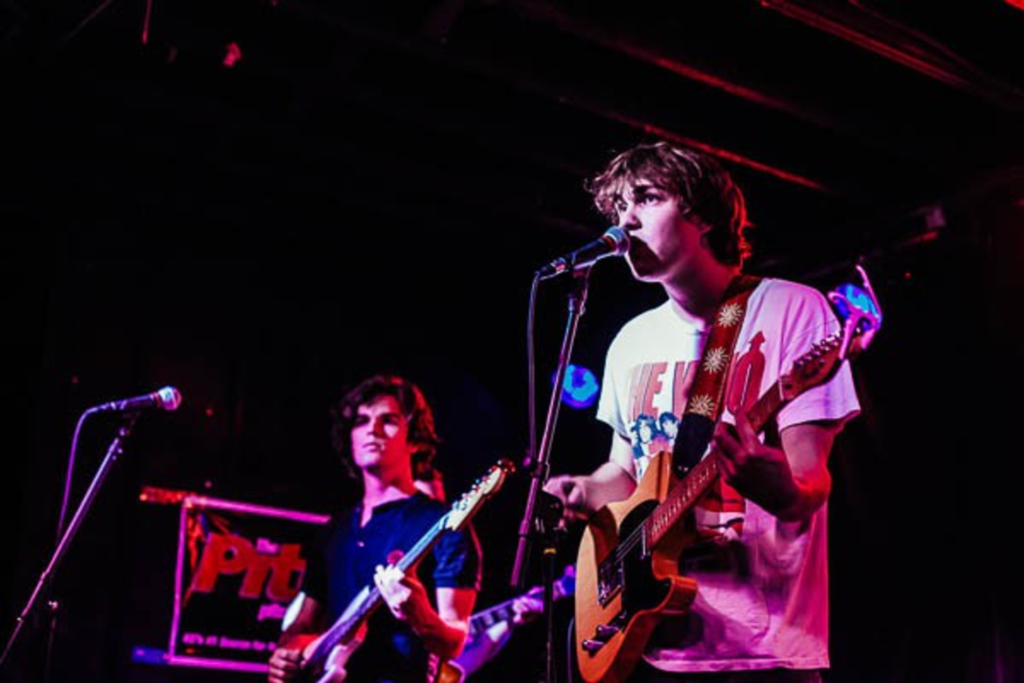 Rev Gusto followed Bummer onstage, and though the two bands couldn’t sound more different – Bummer is all rage and rock, and Rev Gusto shines with pop hooks and spritely melodies – the transition was surprisingly smooth. Rev Gusto’s five members also skew young – not a one is over 22 years old – but their sound hearkens back to the bright power pop of the 1980s, and they accomplish it well.

At this point, Rev Gusto’s debut self-titled EP is nearly two years old (it was released in fall 2012). A listen to that early release reveals much of the sunny disposition the band still favors in its sound, and even a few 1950s-era doo-wop elements, but Rev Gusto has fine-tuned things quite a bit since then. Last night, as the sunlight finally dissipated over Westport, the band skipped through songs that sounded like the kind of pop music a grown-up would find value in.

That’s an utter compliment. Rev Gusto’s songs are for the ages, incorporating breezy hooks that you enjoy automatically, much in the way of the Monkees or the Kinks. (Fun fact: In 2011, Rev Gusto’s lead singer and guitarist Jerry Frederick spent a few months studying with Ray Davies.) The band’s most recent release is a 7-inch single from Too Much Rock, featuring one of Rev Gusto’s new tunes, “Still There,” which was performed last night – and if it’s any indication of what’s to come on the band’s future material, there’s a lot to look forward to. 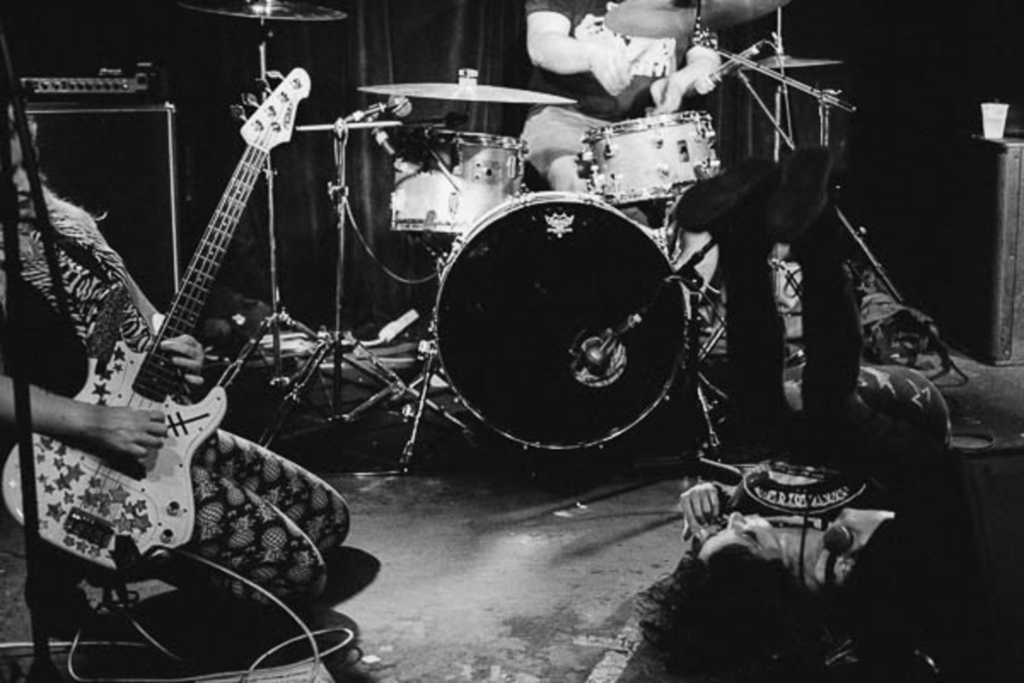 I’ve had a total crush on the Bad Ideas since meeting the band back in January of this year and watching the scrappy female-fronted punk group throw down in a frosty garage. This band plays with such joyful abandon that it’s impossible not to have a good time with them. Or, in the words of guitarist Britt Adair: “Let’s get weird!”

Lead singer Dawn – who forgoes her last name in favor of an air of mystery – is a tiny human with heavy eye makeup, a T-shirt held together by paperclips and safety pins and a monumental chip on her shoulder. She takes out her grudge against the world in the lyrics she pens for the Bad Ideas, with themes drawing from industrial disorder (“Apocalypse Detroit”) and “workin’ for the man” (“I’m Stuck”). Onstage, Dawn is a beast. Last night, she jumped, prowled and glared menacingly at the audience, eventually leaping into the crowd for some in-your-face confrontation, screaming her lyrics: We’re gonna fuck shit up!

But the Bad Ideas’ set wasn’t all fire and brimstone; the members have a pretty good sense of humor about themselves and what they do. After throwing herself to the floor of the stage, rolling around, and seeming to attempt a modified yoga shoulder stand, Dawn rose and declared that her new hairpiece was surviving the set better than she’d hoped. Adair, who had teased her pink-blond hair a good 6 inches beyond her cranium, made a sound like she was about to hack a wad of spit into the audience (the crowd – much larger by now, and very receptive to the Bad Ideas – likely wouldn’t have minded).

These antics hardly overshadowed the downright badassery the players exhibited, though. Bassist Caitlin Curry jumped into the audience during “I’m Stuck,” lumbering toward showgoers like a woman with an argument to win, while Adair’s body curled around her guitar as she shred a mammoth riff, her forearm coated in a sheen of sweat.

“Holy fucking shit,” I overheard one audience member say to another behind me as the Bad Ideas finished playing. 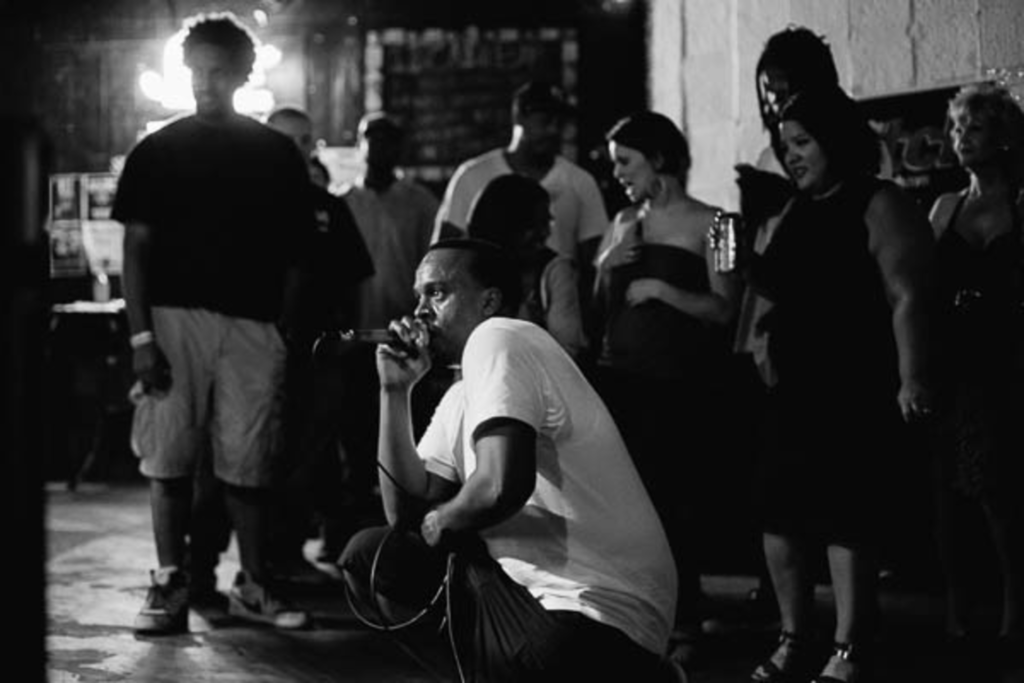 I was so engaged by the Bad Ideas’ set that I nearly missed Approach, who was busy doing his own version of crowd-slaying out on the Riot Room’s outside stage. Or, rather, in the middle of the patio: The Lawrence MC was eye-level with his audience, and he cultivated a close circle as he sped over rhymes faster than the beats should have allowed.

As Approach (or Sean Hunt to those who know him personally) spun around in the crowd, eyes flashing, arm muscles tense in concentration, I suddenly recalled a conversation we’d had late last year. We were speaking not long after the release of Approach’s most recent full-length, Make-Out with Violence – his epic, sprawling opus – and I remember how Approach reminded me of the conundrum present in most hip-hop circles: The rarity of an aged rapper, and how Approach, at 35, was considered an old man trying to play in a young man’s game. It struck me, as I watched Approach rail through the final three songs in his set with chills down my back, that the rules of that game would have to change. 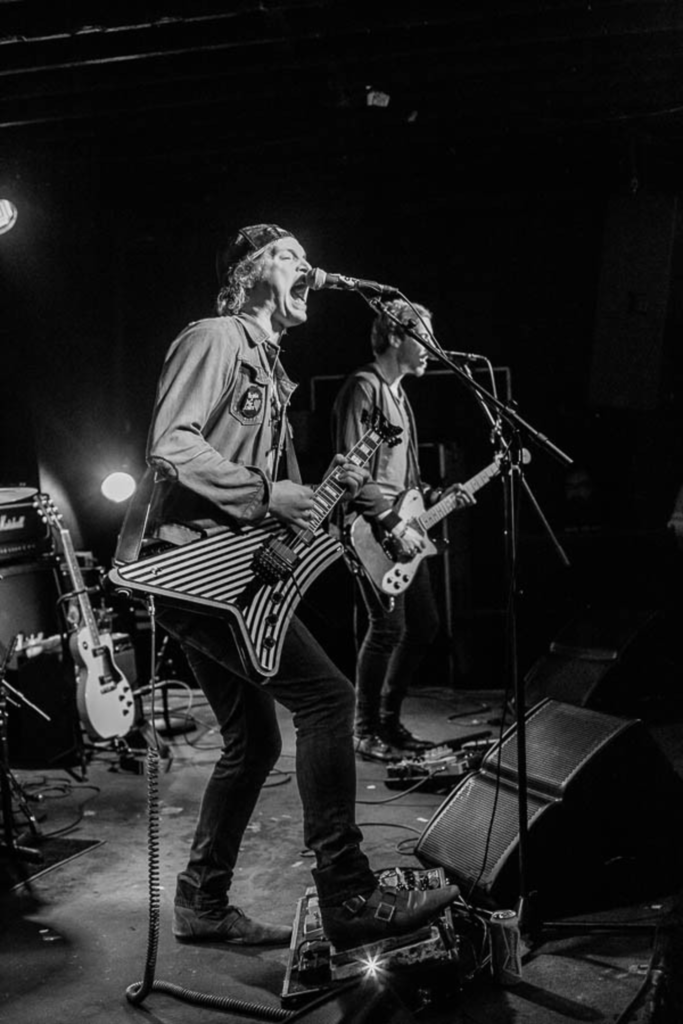 Back inside, Josh Berwanger Band had taken over the stage. Last year, Josh Berwanger – former lead singer and guitarist for beloved KC act the Anniversary – revived his passion for songwriting with the eponymously titled project, and in October, the band released its debut full-length, Strange Stains. This album found Berwanger merrily hand-clapping his way through 11 songs that were rich with 1970s-era pop harmonies and lush rock arrangements (some quite reminiscent of ELO) – a nice cover for lyrics that were usually dark, dissatisfied and sarcastic. Last night, Berwanger’s set was a testament to the genius of that album – and its well-deserved spot on our ballot under “Album of the Year.”

As Berwanger encouraged the enthusiastic crowd to clap along for “Mary,” an upbeat, jangly, quirky tune washed with melodic oohs and ahhs, I found hearty pockets of the audience swaying along, and a few people even singing the lyrics back to Berwanger. For his part, he was a gracious and utterly captivating frontman. You can tell, watching Berwanger onstage, that this is where he was always meant to be, and as he wailed the lyrics to the impeccable “All Night Long” – really, that song could pass for classic Tom Petty – it felt as though there was no better place for the Riot Room crowd, either.

%{[ data-embed-type=”image” data-embed-id=”57150c0889121ca96b9570e3″ data-embed-element=”aside” ]}%
I ducked back outside to catch the Abnorm zipping up his set. I had heard the first few songs – cuts from his latest full-length, The Soular Powered Project – before cutting out to catch Josh Berwanger Band, and it was a delight to watch this young MC cut up beats. The Abnorm is tall, with short dreads hanging loosely around his face; he’s rather fresh-faced, too, and onstage last night, his demeanor was almost cheerful as he joked with audience members. (“Come closer to me,” he beckoned cheekily after the first track, “I need the love, don’t be scared.”)

The Abnorm’s lyrics, though, are full of mood swings and turbulence, and his themes are dead serious. It ain’t rocket science, they don’t want niggas to make it, he raps at one point, Death never sounded so beautiful/except I gotta provide for my two-year-old. And though the Abnorm delivers these lines with a jaunty grin – a powerful gesture itself – there is no mistaking the pain and struggle he is laying out in the open and calling attention to. 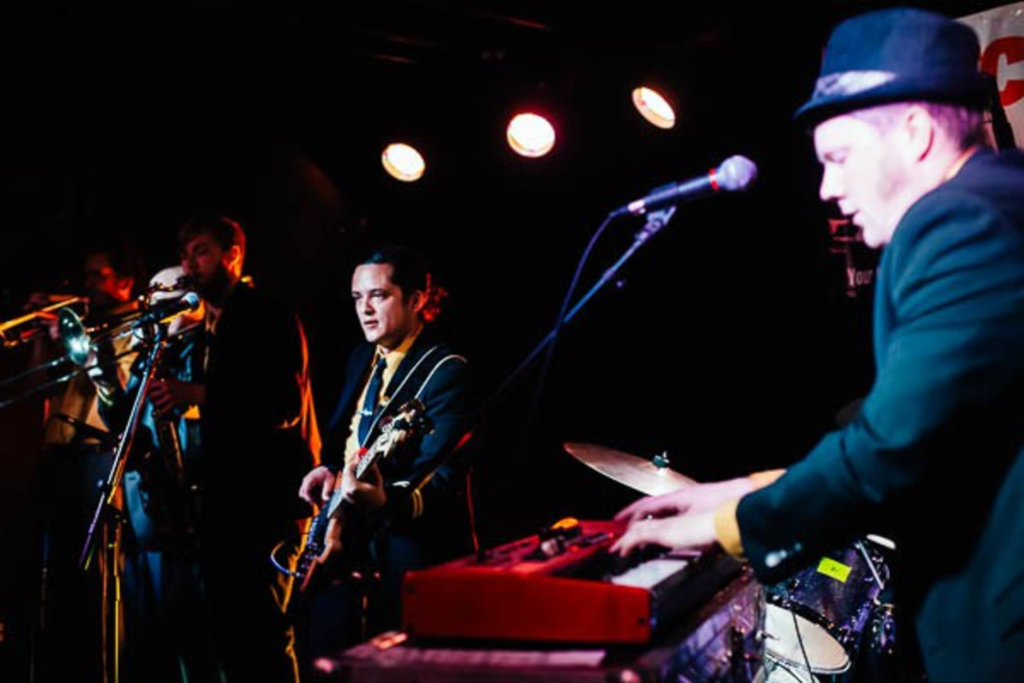 The New Riddim was the final band on the bill for the inside stage, and this was ideal. The suited-up ska seven-piece took the stage just after midnight, and at this point in the evening, the Riot Room crowd was properly liquored up – and in the mood to groove. The New Riddim offered much in this way, with funky reggae jams infused with enough rhythm and soul to get even the most docile showgoer shaking something.

The style of reggae that the New Riddim specializes in has likely been influenced more by Kansas City’s jazz history than the Caribbean, and as trumpet, saxophone and trombone notes expanded the ribs of the band’s songs, I couldn’t help but appreciate the bold update on the music. I observed the crowd and spotted a few of the Bad Ideas’ members dancing recklessly, and felt a little surge of pride in knowing that music genres in this town can overlap far more easily than most would expect. 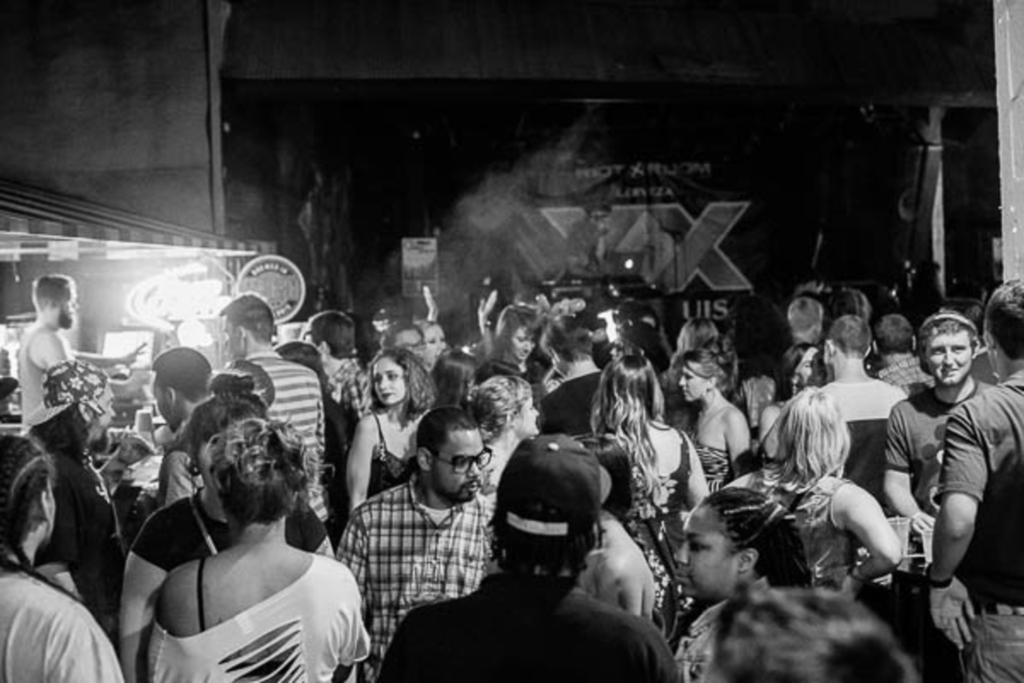 A few songs later, I found myself in need of respite from the thick air inside the Riot Room, and pushed my way onto the patio for the DJ set from Sheppa. Unfortunately, it seemed that a good amount of other Showcase attendees had the same idea I did. Though the crowd appeared buoyed by the thumping of Sheppa’s selection, once I found myself close to the exit, I decided to slip out. And as I walked to my car, I could hear the sounds of Westport trailing behind me.

See also:
Rev Gusto discovers the delights of vinyl in time for Record Store Day
Bummer’s recipe for success: Keep it simple, keep it short
As they move from weird to “Normal,” the Bad Ideas make good plans
The Abnorm talks being a solo artist versus working with rap group Yawn Johnson
Hot off the release of his biggest album yet, Approach plans an epic new year
Josh Berwanger returns to music with Strange Stains
The New Riddim’s earnest white-boy reggae