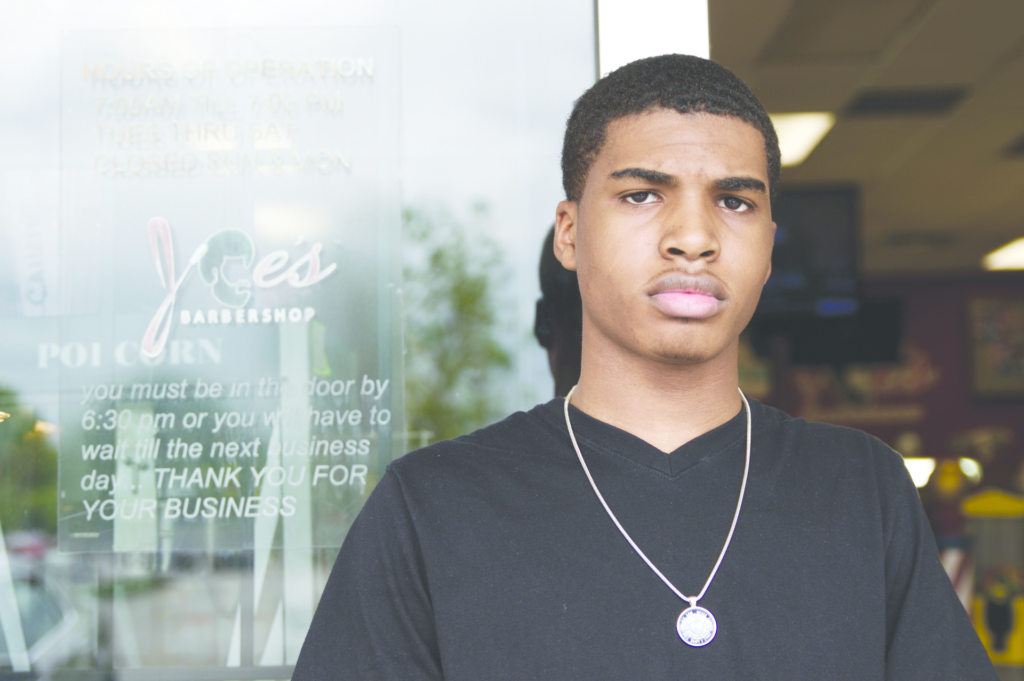 I meet Kye Colors at Joe’s Barbershop on an overcast, late spring day. His father runs the business, which is located in a plain strip mall off the Paseo, on the south side of Kansas City. The shop’s walls are painted a dark red and plastered with sports memorabilia. An episode of Family Feud is blaring from a television at the center of the room. Kye (born J’kye Slatton) doesn’t work here, but he steps out from behind the front desk to greet me.

His dad’s store is a convenient spot to sit and talk after Kye, 17, finishes his school day at Hogan Preparatory Academy. He tells me he’s been writing raps since he was in elementary school. Back then, his favored implement was a crayon — a preference that factored into his choice of stage name.

Kye has released two projects so far, the more recent being a mixtape called 00, issued when he was 15. That tape and the singles that followed it earned praise from a range of local artists, solidifying the young man’s place within Kansas City’s hip-hop scene.

He tells me that he plans to finish high school, then study audio engineering in community college — depending, he adds, on how far along his music career is by then. He’s just about to finish his junior year; he has time to weigh his options.

I ask him about his new single, “House Party.” Kye wrote and produced the song, as he did with the rest of the material on his upcoming tape. The track features hints of gritter hip-hop — a signature Kansas City style — as well as West Coast G-funk bass lines. Kye says it’s unlike the rest of his new stuff. It’s also unlike his old stuff. Previous singles of his, including “Sweet Chin Music” and “Get Right,” consisted largely of Kye all but shouting at his listeners. This track finds him more composed, confidently riding the song’s groove and crafting a memorable chorus.

The lyrics tell a story of a night out partying with friends — an outing that ends in gun violence. It plays like Kye conveying a cautionary tale to himself, even as it also demonstrates an obvious increase in focus since that first release. To hear it is to root for Kye to stay in school, graduate and then learn to fully master the recording studio.

The rest of the tape, he says, will showcase his version of soul-sample-based production, following in the footsteps of Kanye West and other acts that gained attention a decade ago for pioneering that style. Now that trap-style 808s dominate the modern hip-hop landscape, Kye’s sampling flashback could be a canny way to set himself apart from the competition.

The name of the new tape also seems destined to leave an impression. Kye is calling it Milk Is Nasty — an absolute truth, as far as he’s concerned. (He harbors a schoolboy distaste for the drink, unless it’s strawberry flavored.) The phrase has another meaning, though: It’s a reference to a teacher of his who is leaving the profession because his students didn’t want to learn. Here again is Kye the appreciator of a good education: He says he wants to feed hip-hop fans something new.

Other material on the tape covers personal issues, Kye says, experiences he’s had growing up in Kansas City. One song is about educating non–Kansas Citians on the slang term boosie (meaning fraudulent). Another song clarifies that the “Colors” in Kye Colors is not a reference to the LGBT community, as some have apparently assumed.

I point at his plain black T-shirt and mention that he isn’t dressed too colorfully.

Kye aims for Milk Is Nasty to help him attract a larger following, but he doesn’t expect to become famous overnight. He already has a vision for his debut album (and a title: Roy G. Biv), which he hopes to release in 2020. By then, he says, he’ll have had time to save up a bigger recording budget and find at least one big-name collaborator.

“I always wanted to work with Tyler, the Creator,” Kye says. “For just one song, man, that’s it. One song.”

I ask Kye if he sees himself becoming an artist with a niche fanbase or would rather be a Top 40 act. He doesn’t have to consider his answer long: “Top 10,” he says.

He pictures a Drake-like future: “Everybody knows, if they just see my face, like, ‘Oh, my gosh, that’s Kye Colors.’ If I’m about to drop a song, the whole world will just stop and listen to it.”

Not that Kye lacks a Plan B. In a less Drake-like world, he says, he’d try his hand as a singer. Failing that, he’d move to producing and engineering full time.

Regardless, he plans to give back to Kansas City artists.

“When I do work on the album and it turns out good — like, successful things happen for me, for the people around me — then I feel like then it’s going to have to get bigger than this. I wanna have to start helping out people in the community, like younger artists that don’t get to get heard, and I could mentor them to be better.”

The first step toward a more Color-ful community: Milk Is Nasty’s online availability in late June. (Plans for Milk T-shirts and an outdoor concert called Jammy Jam are also in the works.)

Before I leave his dad’s shop, I ask Kye what he wants listeners to hear when they play his new tape. We’ve talked awhile, and I’ve heard him at his most verbal, but this answer is another shorty that’s sharp and obvious.