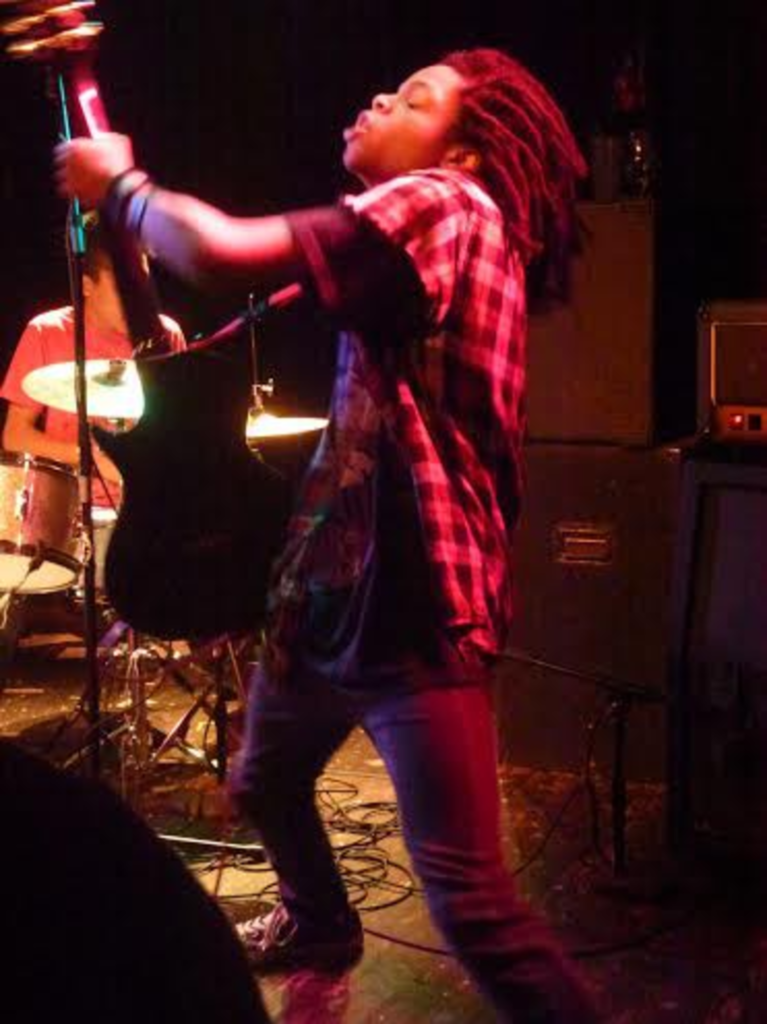 Right before Radkey kicked into its set at RecordBar Friday night, a song from 1970s British punk band the Buzzcocks played overhead; bassist Isaiah Radke gleefully mouthed the words as the band set up. The Buzzcocks, in their day, represented youthful exuberance and angst through three-minute infectious blasts of rock. The trio held to that template solidly on Friday and gave the crowd a lesson in rock-and-roll basics at their best.

The three brothers from St. Joseph have had a tremendous year. They completed their first tour of Europe, they’ve been raved about in popular magazines, and they performed on the BBC’s decades-spanning television show Later… With Jools Holland. With only two EPs under the young band’s belt, it’s safe to say that Radkey is surrounded by a lot of buzz. If the brothers were out to prove themselves at RecordBar, they succeeded.

“Out Here in My Head,” the song that was played for the Jools Holland debut, was also the first song of the night. It’s an intense thrasher that gives no room for a breather. Throughout the show, guitarist and lead singer Dee’s bellowing voice filled a room like a floodlight. At times, he had a menacing growl; at others, a strained yelp. He spent a lot of time on blistering metal guitar solos, and where in other bands such lengths might seem superfluous, the oldest Radke brother accomplished things with precision and talent.

Taking a cue from many early punk bands, Radkey takes a simplistic view to a lot of its lyrics. “Is He Alright?” was introduced as a song about asking a guy if he’s all right. “Start Freaking Out” lets you know that it’s time to lose your mind. Most choruses for the band’s songs are shouted repeatedly. That, along with the band’s propensity to throw in “Hey!” and “Ho!” cries, makes for a show of mostly fist-pumping anthems.

Middle brother Isaiah serves as the band’s mouthpiece. He introduced songs, talked about his believed likeness to Lionel Richie, and about seeing the new Hobbit movie. He also showed a side of brotherly love: When drummer Solomon, the youngest Radke, had to readjust his drums after a few songs in, Isaiah was quick to give his baby bro a good-natured jab.

“If this motherfucker could play the drums right,” Isaiah laughed. “He’s the coolest 16-year-old motherfucker I know, though.”

Solomon plays with a hard-hitting, intense focus that he rarely breaks. Later in the show, Isaiah asked the crowd to give his brother a hand for all his great work.

“Cat and Mouse” might be the band’s first instant classic, given the crowd response when it was introduced. The song is catchier than most anything on Top 40 radio these days. The crowd got worked into a frenzy, and people twice the age of the band members were crowd-surfing (some more successfully than others).

“Romance Dawn” features three tempos: somewhat slow, really fast, and Motörhead. As the song came crashing to the ground, so did Dee, as Isaiah knocked him over with a head-on tackle in one of the night’s funnier moments.

For an encore, Radkey played three solid covers. Before delving into OutKast’s “Hey Ya,” Isaiah asked for three or four girls who love to dance to join them onstage. Seven very enthusiastic girls was the final count, all shaking “like a Polaroid picture” as the song commands of anybody. When the song ended, adoring hugs and kisses were doled out to the band, and then the girls let them own the stage again.

The show ended with the Misfits’ “Last Caress” and the Ramones’ classic “Bonzo Goes to Bitburg.” No bands are mentioned more around Radkey than the Misfits and the Ramones – this makes perfect sense, given the dark tones channeled through Dee’s voice and guitar work, the comic-book-influenced lyrics, and the penchant for memorable pop hooks.

Friday night’s show was a great night for punk-driven tunes and adolescent playfulness, but to a perceptive mind, there’s more going on here: potential. The oldest member of Radkey isn’t yet legally able to drink, and the band has already come to a point that most bands are not able to make. At the speed that Radkey is progressing as a musical entity, the possibilities are limitless, and it might be a ride you want to tag along for.