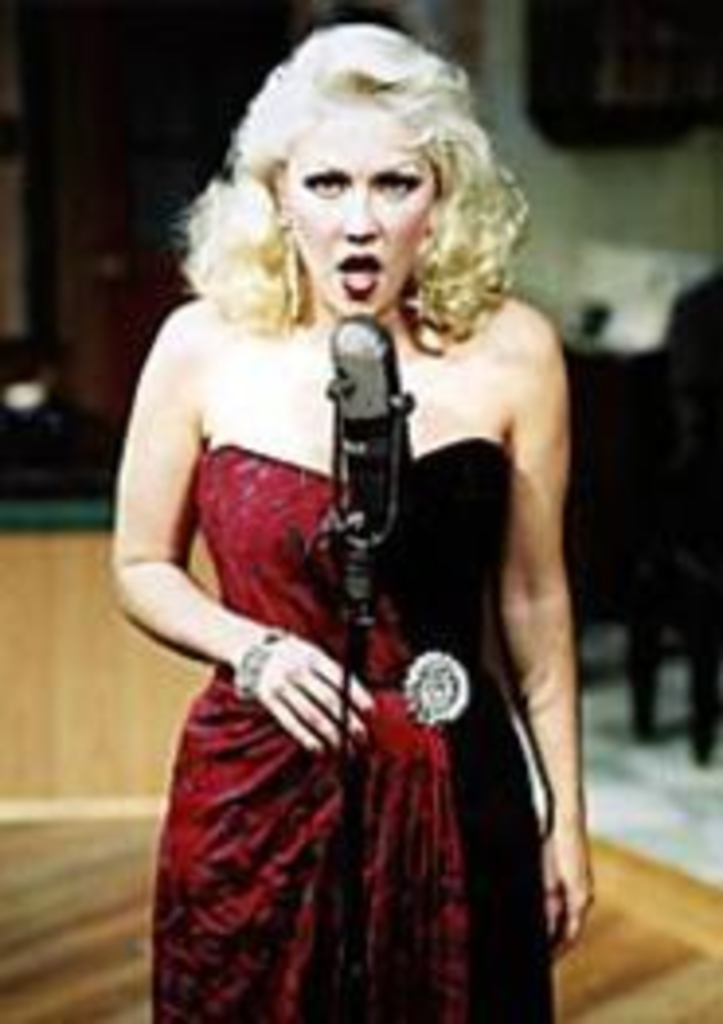 In 1942, a gallon of gas cost 16 cents and a new house would set you back about $7,500. Stockings sported seams (or fake seams drawn on with eyebrow pencil), and the great tunesmiths were in their prime. Among the composers sampled in American Heartland Theatre’s rerun of its previously staged The 1940’s Radio Hour: Rodgers and Hart, Harold Arlen, and Johnny Mercer. Though the war raged overseas, the home front kept up its spirits with big bands and buxom singers. Every gesture seemed to telegraph the message “This one’s for the boys.”

Directed by Michael Vodde from a book by Walton Jones, The 1940’s Radio Hour is, if not always inspiring, true to its title. The show is composed of a half hour of preshow chaos and then a literal hour of vintage songs and commercial endorsements, such as the tasteless laxative ad that opens act two. Though the preshow has the energy and overlapping dialogue of a Robert Altman film (where your eyes are the camera, fixing first here and then there but mostly on Lea Lavish in a slip), the 60-minute radio show that is designed to encapsulate nostalgic bliss is quite benign.

There are some nice touches by certain actors who give their paperback characters more spine than you’d think possible. James Wright’s Johnny is a bitter drunk whose ego is disproportionate to his charisma. Lavish’s Ginger, with a platinum-blond screen-siren wig out of Ginger Rogers’ closet, inflames the masses with a sassy rendition of “Blues in the Night.” Duke Howze and Seth Golay bring some teeth to, respectively, the grumpy emcee and the bright-eyed, collegiate singer. And Ken Remmert puts in double time on both the drums and a vast collection of radio sound effects, from coconut horse hooves to the clothespins hung on strings that sound miraculously like a regiment marching home to victory.

But just as many moments greet the faux airwaves with all the pizzazz of a church hymnal. Patty Tiffany, for example, delivers the most sexless “That Old Black Magic” ever seen. Cecilia Belser Aderonke gives the head-to-toe impression of a Lena Horne without the necessary vocal abilities; she’s a costume without a body. Terry O’Reagan is miscast as an eager beaver of dubious youth, and Frankie Krainz, equally zealous in his aspirations for the spotlight, is merely annoying.

The band, led by musical director Anthony Edwards with Harold Steinhardt on reeds and Theo Wilson on bass, makes the songs affecting even when the singers fall flat. And Howard Jones’ set pours on the detail (such as padded leather doors and a makeshift message box) without getting in the actors’ way. But the set-up for intermission is indicative of how hard the show strains to be indelible. A convenient power outage leads to a terse directive to take a 15-minute break, where the show would have benefited from a 90-minute one-act. It’s a phony disruption to a rather unremarkable collage of canned rhythm and blues.