The news is bad, everyone’s anxious, and most people in the service sector are at least temporarily out of work. Kansas City could really use a beer.

That might explain the overnight popularity of Quarantined Beer Chugs, a distended Facebook group full of videos of locals chugging beers and grinning. The posts range from shaky selfie videos of members shotgunning yard beers to extended, scripted scenes of drinking and dancing. The one constant is that everyone seems to be having a good time.

Liberty resident Andrew Beile started the group as a fun way to stay in touch with his friends while isolated at home. When he started the group on March 20, he invited 15 people. By March 24, the group had cleared 156,000. Kansas Citians still dominate the videos and comment section, but the group now has global reach.

The explosion of members has stretched what might seem like a thin premise to comic proportions. In one video, three men with nearly identical haircuts and glasses each drop a chicken wing into a full pint glass, chug the beer, and then bite into the wing-like a lime wedge after a tequila shot. The video is soundtracked by Jeremy Osborne’s “On the Wings of Love.” Also: the group now has a “Quarantined Beer Chugs Live Concert Series.” The latest livestream featured a six-deep lineup of musicians and DJs.

Fortunately, the popularity doesn’t seem to have gone to the admins’ heads. Beile still regularly posts modern koans in the group, instructing members to “send water chugs if you in too deep” and to “keep the smiles and vibes rolling.”

Even his admin reprimands are wholesome:

No felonies. // Photo by Liz Cook

You don’t have to be a beer drinker (or a drinker at all) to participate in the group—members have filmed themselves taking shots of water or chugging pints of cream soda.

“It’s not as important to chug beers as it is to do something for your community,” admin James Hutson says. “So that’s what the chugs are for. Every chug done puts one more smile on a face that really needed it.”

To that end, on Monday, the admins launched a merch line to raise money for businesses that have shut down to halt the spread of the coronavirus. Chuggers can now purchase t-shirts, koozies, and hoodies based on the group’s original header image design by artist and Kansas native Anna Church. 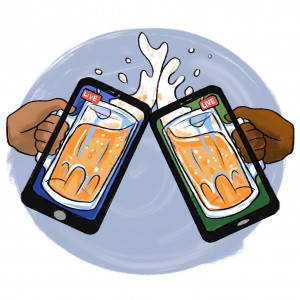 Hutson, who’s overseeing the merch sales and donation program, says they’re still working out the fine print. But he emphasizes “all profits created are going into a pool which will turn into donations to stimulate small businesses,” adding that he’ll be showing the group daily sales and profits to keep things transparent and allowing them to decide on beneficiaries as a group.

That’s right, folks: a group that began as a place for bored friends to share phone videos of themselves chugging beer is now our social safety net. God bless us, everyone.

Even without the donations, Quarantined Beer Chugs seems to be providing a public service. The group’s sense of humor and boundless Golden Retriever positivity have been an absurdist bright spot on my feed, which has been otherwise dominated by dire predictions and a shared anxiety humming in the background like horror-film infrasound.

Beile’s energy has been a balm. Beile has been a Fred Rogers—a Frat Rogers—for our time. Just swap the cardigan for a Chiefs sweatshirt.

“We’re going to kick the shit out of these hangovers,” Beile began a recent video, pronouncing March 24 “Hydration Day.” He took a lusty swig out of a gallon of water, praised the importance of electrolytes, and ended the video with a rallying cry for all people of goodwill:

You heard the man.