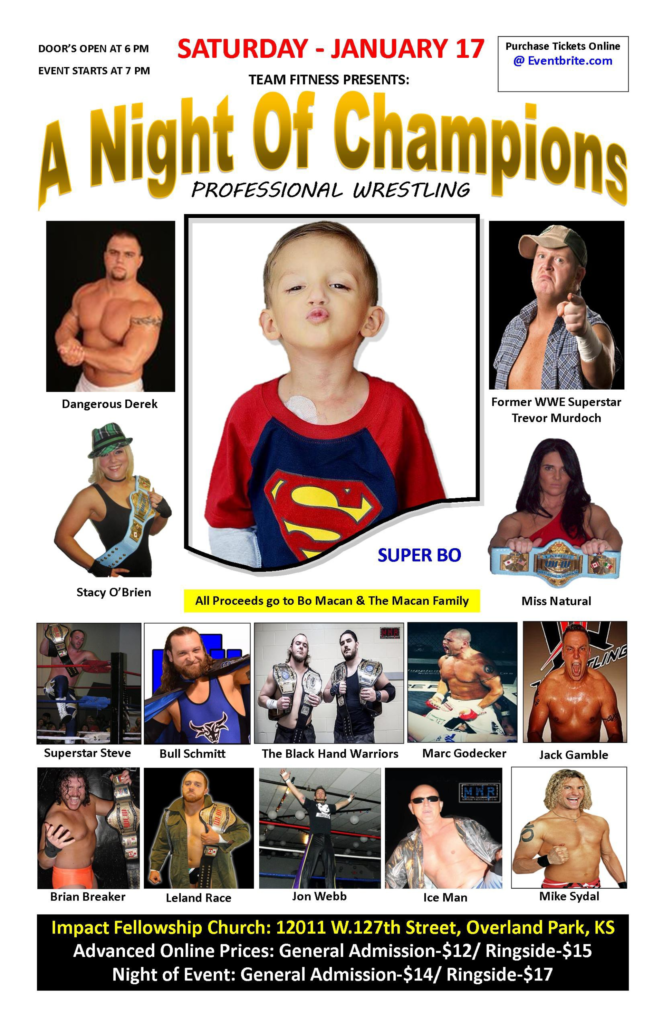 “Super” Bo Macan is a fighter, and Saturday night there will be a pro wrestling show at the Impact Fellowship Church (12011 West 127th Street, Overland Park) to raise money for the 5-year-old Roeland Park boy who has a genetic condition so rare that it was named after him.

Among Bo Macan’s extensive list of health issues in “Bo’s Syndrome” are type I diabetes; growth hormone deficiency; thyroid problems; seizures; chronic lung disease; Immunoglobulin A; and permanent granulomas on his lungs, liver and in his bone marrow. Bo’s body struggles to fight off infections, and he spends upward of 100 days a year — including birthdays — in a hospital.

“I thought it’d be a cool thing for him,” McQuinn tells The Pitch. “The night would be about him, and maybe it’ll take away some stress for at least a few hours.”

McQuinn, also known as “Dangerous” Derek, attended middle and high school with Carolyn at Shawnee Mission North. When he heard about Bo’s condition, he wanted to help. So he called in some favors and put together the wrestling show, which will feature six matches.

McQuinn will wrestle former WWE superstar and tag team champion Trevor Murdock in the main event. Doors open at 6 p.m., with the show starting at 7 p.m. Tickets cost $12 and are available here. All of the proceeds from the show go to the Macan family.

McQuinn tells The Pitch that he’s unsure if Bo will be in attendance. It just depends on how well the boy is feeling that day.

“They [Bo’s family] don’t know how the day will unfold,” McQuinn says. “We’re hoping and praying that he’ll be there.”

McQuinn wrestled professionally for eight years after being trained by legendary wrestling champion Harley Race. Seven years ago, McQuinn retired after tearing his left rotator cuff. But he says he’s coming out of retirement for one more match Saturday to help out Bo’s family.

“I got the itch to get back in and go out on my own terms,” he says, “and I thought this would be a great chance to do that.”

The card will also feature former WWE developmental wrestler Brian Breaker (Brandon Traven), Mike Sydal, Miss Natural, the Ice Man and several other local independent wrestlers. McQuinn says to expect an old-school, family-friendly event. In addition to the wrestling matches, there will be face painting for the kids and a raffle.

If you’re interested in helping the Macans but cannot attend the show, you can make a donation here.