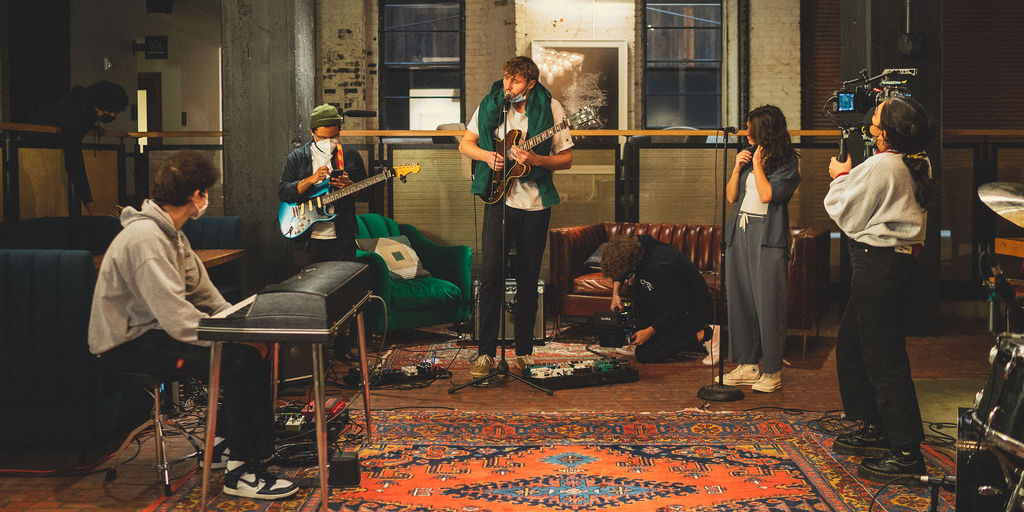 Noah Spencer has been a touring member of The Greeting Committee since 2018. Between tours, the multi-instrumentalist singer-songwriter began writing music of his own. That all culminated in his single “Wednesday,” which premiered Feb. 25.

While writing the song, as well as the rest of his forthcoming EP, Census, Spencer couldn’t help but miss the excitement and intimacy of live performances. Like so many things during the pandemic, live music was temporarily taken from our collective lives and is only recently making a large-scale comeback.

Though the music video for “Wednesday” was released alongside the single, Spencer still wanted to release a semi-live performance of the song. Instead of grieving live performances, Spencer decided to get his friends together to create a video that felt like one. Those friends included friends from college, fellow musicians, and The Greeting Committee.

The Pitch is thrilled to premiere the live video, which you can watch here.

Spencer sang lead in “Wednesday” and was accompanied by Addie Sartino of The Greeting Committee. Brandon Yangmi, also of The Greeting Committee, plays bass in the video. Micah Ritchie is featured on drums, Remy Styrk on guitar, and Cole Crawford on the Wurlitzer piano. Sunny Perera and Thomas Farmer directed and produced the video, as well as the music video for “Wednesday.” 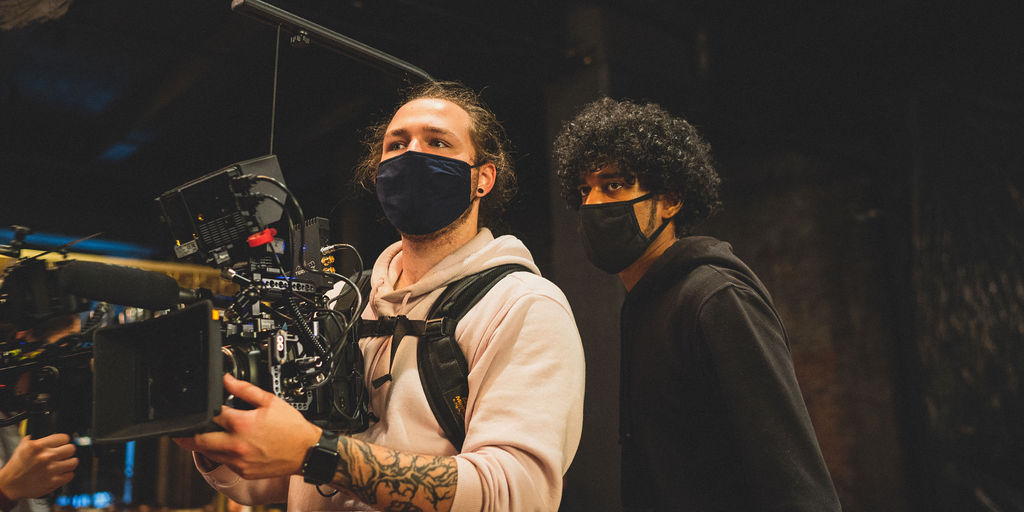 When imagining what a mock-live performance would look like, Spencer was drawn to the Crossroads Hotel. He says the hotel has the best aesthetic in the city, so working with them was a highlight of the process. The issue was not in choosing the location, but where in the hotel to do the video.

“I feel like the thing about that hotel is that when you go in there, your mind kind of wanders,” says Spencer. “You think of all the cool things that could happen in this place because it’s so grand and really well put together. There are so many different rooms that have so much character, so it was really difficult to decide where we were going to do it.”

The video was produced and directed by Tamarind, a Texas-based production company led by Spencer’s friends from college.

“I think my favorite thing is how we spent all this prep going into the live video well before we even saw the space—and luckily everything came together in the way we wanted it to,” says Perera, director of the video. “Noah and many of us on the crew started as just a group of friends in college and now we’ve stuck by and supported each other creatively for years. Seeing all the hard work done by everyone together in a dope video is super rewarding.”

The video begins with an introduction that captures the aesthetic of the space they’re in. It draws the audience into the video and makes them feel like they are with the band in the Crossroads Hotel. The videography—balanced between closeups of the performers and wide shots of the room—provides the audience with the feeling of being in the front row of a concert. In no other place would there be this intimate look at a performance. 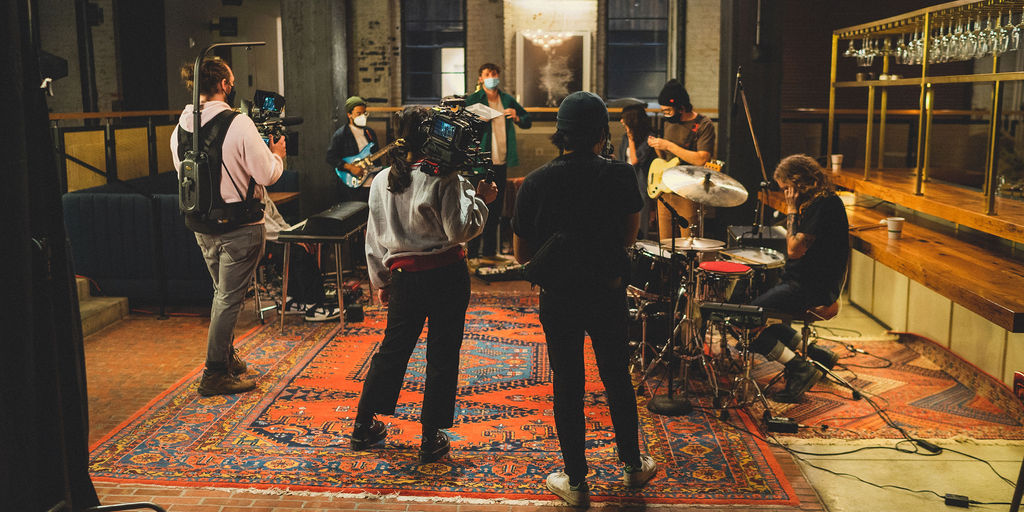 The blend of the hotel space and the music was not lost on the performers.

“I love the colors,” says Styrk, who played guitar in the video. “The interaction between the colors and atmosphere of the set and the music worked so well. The set, the people, the energy; it all felt like home.”

Watching the video evokes a catharsis for the loss of live music last year. There’s something special about feeling like you’re in a room with a band watching them create something special. The end product stays true to Spencer’s original vision: to create a video that brings live music, in some form, to people.

“For me personally, it was like it was a release,” Spencer says. “To be able to do something like that, to be in a space with my friends and bandmates and be playing together. That was something that hadn’t happened since January at the Uptown. I haven’t played a show since then. Doing it in something like where it’s in a hotel lobby, it was unique—it’s being recorded as its very own unique experience, so it felt really good.”

“The hardest part was not seeing the space,” Perera says. “[It] really comes down to the logistical problems of how we can do this in the amount of time that we have in the space, and do it well. So that was just a lot of trying to prepare for it. It’s better to be over-prepared. That’s what we were and it ended up working out really well.” 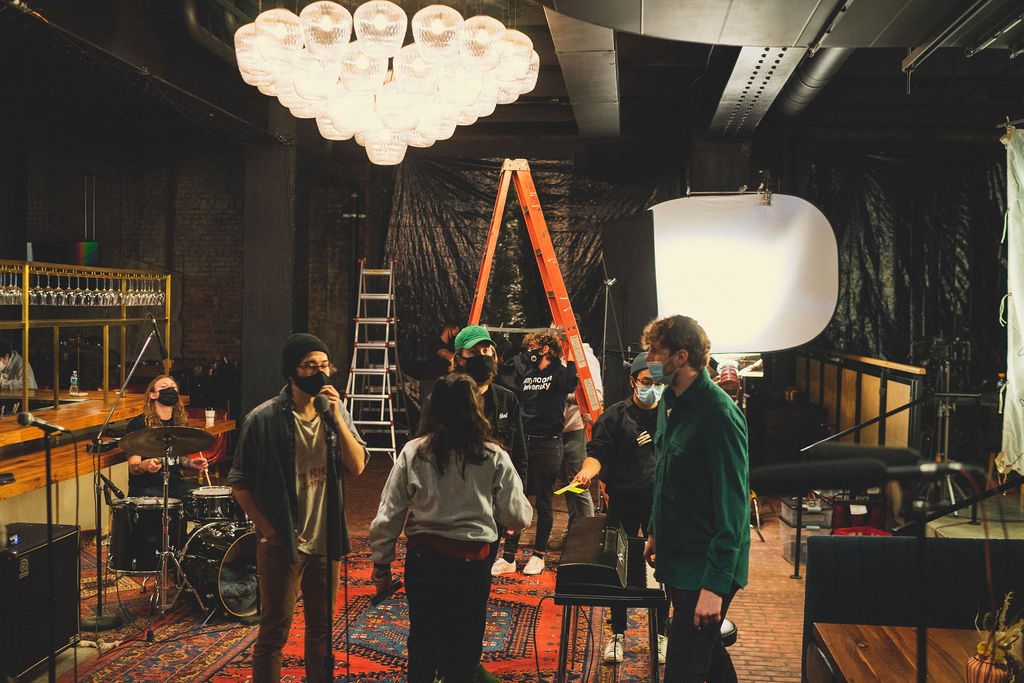 To get the feel of the space without visiting it before the shoot, the Tamarind team went through the Crossroads Hotel’s Instagram and website. That way they could get general estimates and a rough feel from the space before they arrived on set with only two days to prepare and shoot.

“It was a spontaneous creative burst to start, however, the process of making it happen was anything but spontaneous,” says Farmer. “It was months of pre-production and constant communication between us and Noah. Since Tamarind is based in Dallas, Texas, we couldn’t easily see the location over at Crossroads Hotel KC. Trying to prepare and plan a complex video shoot in a space that you can not physically see or be in was definitely the most difficult aspect of the entire process.”

That pre-preparation allowed for the group to channel into the song and their feelings around it during the recording.

“Truly, it’s been a surreal experience working with 100% friends on this project,” Ritchie says. “I say surreal because working with friends creates an illusion. Everyone is putting their all into the project and knows it’s something special but because there is this extra connection, it feels much more low-key in the moment.”

Spencer brought a clear vision and direction to the project that aided the performance. 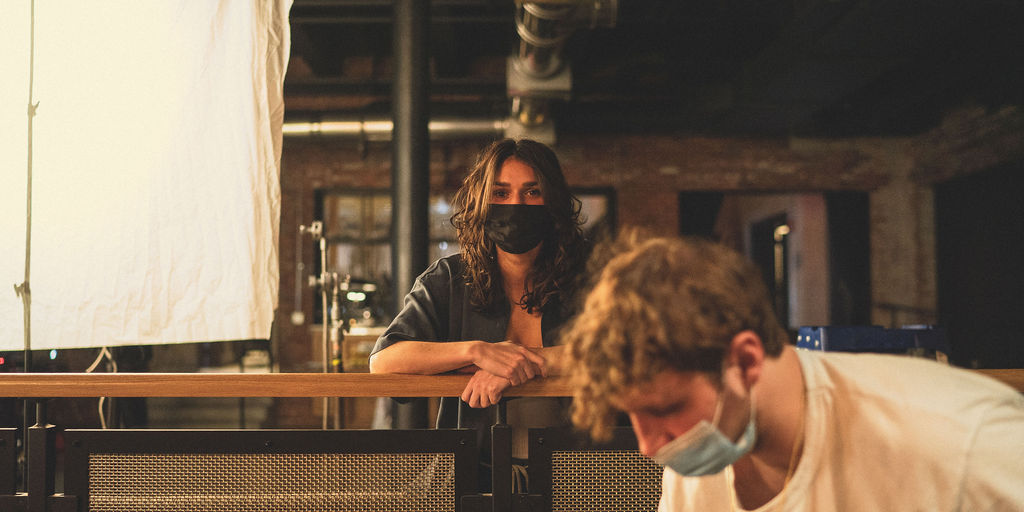 “My favorite thing about how the live video came together was getting to hear Noah’s vision and see it come to life,” says Sartino. “He’s incredibly hard-working and talented and watching his leadership skills flourish was a proud friend moment for sure. My favorite thing about how the song came together is the memories that come with it and how long it took to go from an idea Noah shared with me in our 15 passenger van on tour to being a tangible recording.”

The bond that the band shared is moving to experience—for both the band and the viewers.

“My favorite part of working on this video was working with the team,” Yangmi says. “It felt like a big group of friends filming a school project together. A super relaxed environment with talented and professional individuals doing what they do best.” 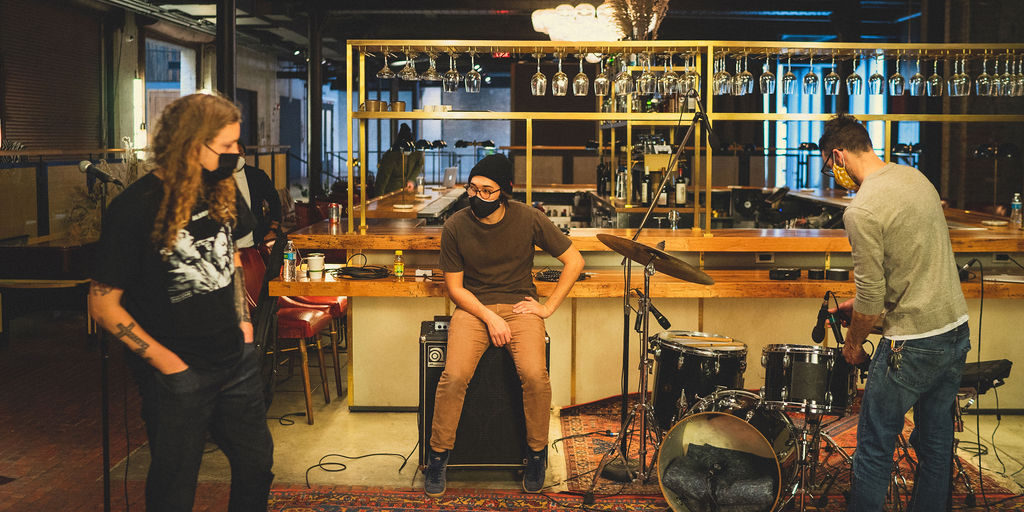 In just over six minutes, the “Wednesday” live video is a microcosm of a concert. The instrumental portions at the beginning and end of the song allow room for each viewer to bring their own experience, their own emotions, to the performance. Conversely to the ending lyrics of the song—“when life gets hard to breathe in”—the video production and performance give viewers a chance to breathe and let go in the moment.

In addition to the premiere of the “Wednesday” live performance video, Spencer will also be releasing a second single. The song, called “Over My Head,” will drop May 28 and is the final single from his upcoming EP, Census.