This is one of those stories that crosses our desk and serves as, primarily, a reminder that KC musicians are out there just serving pure unhinged cool chaos int he world. Metro native Aidan Noell just released this track that we couldn’t be more thrilled to be sharing with you today. When she isn’t serving in the up-and-coming Nation of Language, Noell has been unleasing a slow trickle of individual tracks—all of which are bangers. Today, we’re sharing a musician releasing that.

“Making this song became about being someone else for a little while,” says Aidan Noell. “At a time when everything around us is difficult and grating and extremely real, for these six minutes I indulge in a total fantasy—an alternate universe, both of the past and future, that’s mysterious and sexy and fun. Inhabiting that world as a unaffected and cool character was a brief and welcome respite for me, and I hope that listening to it can also transport others to that place.”

Noell is the keyboardist with the nationally touring act Nation of Language, whose countences have recently graced the stage of The Late Show with Stephen Colbert.

Nation of Language band member and Kansas City native Aidan Noell joins forces with LCD Soundsystem’s Nancy Whang, together transporting listeners to the thrilling, trance-inducing world of “Sharevari.” The new single is an homage to 1981’s prototypical Detroit techno track, which launched the genre when it was first released by A Number of Names.

We sat down to Noell to discuss why one would cover this rare slice of a general few know at all, and how a member of LCD Soundsystem wound up working on it?

The Pitch: How long have you been sitting on the recording of this song, waiting for the right release?

Aidan Noell: Some of the Nation of Language songs have been in storage for four years now, just waiting for their day. So my delay is nothing like that.

I recently found out that OutKasts “Hey, Ya!” sat on the shelf for like five years. But that’s like the best song of a decade. What happened there? In my head, it’s just the Back to the Future scene where they’re like, “you’re not ready for that one yet, but your kids are gonna love it.” so yeah. Let’s talk about this. This is like your third big release. How did this come together and how do you wind up working with Nancy?

It was finished in March, so not so long on the shelf. It came together because we’d been doing of of this Nation of Language work, and in this week off I got to hear this track. Detroit techno smash hit and the music video for it was amazing. It was just this video from a weekly dance party in Detroit. There’s a guy in the vid who is playing a guitar that’s clearly not plugged into anything. It was wild but fun. Always fun to hear how long something sits on the shelf. So I wanted to make something in that image.

How do you go about reinventing this new track in a sincere but original way?

Nick Millihiser is my producer and he was just gonna do a studio version for it. He’s the perfect guy, he’s got a drum sound for everything and a million synths. We wanted to find the tones and instruments that made it as dancable as possible. He’s partners with Nancy (Whang) and they have an apartment together. The studio is first floor and they live on the second floor. She comes by while we’re working all the time just to say, “Hey!” She was walking by our session and we asked if she’d like to hop in the vocal booth with me. It was so much fun.

The casual nature with which you collaborate with Nancy on this in her living room. Just asking Nancy Whang to be a part of your music because she can’t pretend to be busy, and then just go make pancakes directly in front of you.

She was down. Thought it sounded fine. There was this scream in the backing vocals that we hit together and it was quick, easy, and perfect.Is it sort of freeing to be able to approach songs like that and not have to ever come at it from the position of like, considering how you’ll pull it off live and instead to be like, I can just use everything I want here?

What was your approach to this new cover? There’s a lot of straightforward interpretation, minus jettisoning the faux-German accent and the weird vocal stutter effect. Was this to make it a more human, approachable version? Or were these choices made for other reasons? 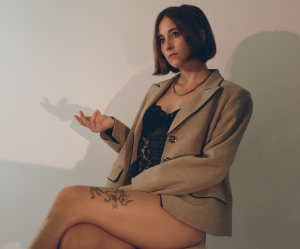 No, definitely. I knew right away that I was just going to sing it in my normal voice, which is like, you know, it’s like my speaking voice, but it’s sort of affected like not by any tools just like I’m using my most dry like spooky assets. Right when I’m in Mensa. So it was like, I kind of knew right away that that was like the first thing that was gonna go is that that hilarious? That German accent? And then like, the next thing was like, how am I going to replace these sounds and these like drum machines that they use because they’re all awesome. And I wanted to reflect on that and sort of bring it into my world and my past two recordings. So that was fun actually.

SI take that 1981 Proto-Detroit techno is not your main influence. What would you consider your music to be based within, stylistically?

So when you sit down to start a new track, how do you start figuring things out? Or do you have sort of like, a whole like, drumbeat baseline sort of thing imagined in your head? Where do you start songwriting—I imagine it’s not sitting down with an acoustic guitar.

I don’t know how to play guitar. Usually a keyboard with an arpeggio that I like and can riff over vocally. I have poems I try to fit it to, then I add drums and a synth line. I take it to my husband and we start adding things with the other band names. I’m just in pursuit of texture. I don’t do that in the early stage.

Has anyone from the Detroit scene or associated with the original heard your cover?

I have I haven’t heard from them at all. But I would love for them to hear it and to see if anyone has any, like strong takes on it even if it’s negative. I think it would just be cool for them to hear it. But um, yeah, I don’t really know any of those people because, like the original song was put out by like a group called A Number of Names. Because so many people are involved in the production of it. But yeah, it’d be cool to to have them here and hopefully they will. It gets around enough.

Any shoutouts to KC musicians or bands you might not be able to see right now?

I’ve been lucky enough to see Kevin Morby play recently. I love the new album. We played the same festival with him in London.