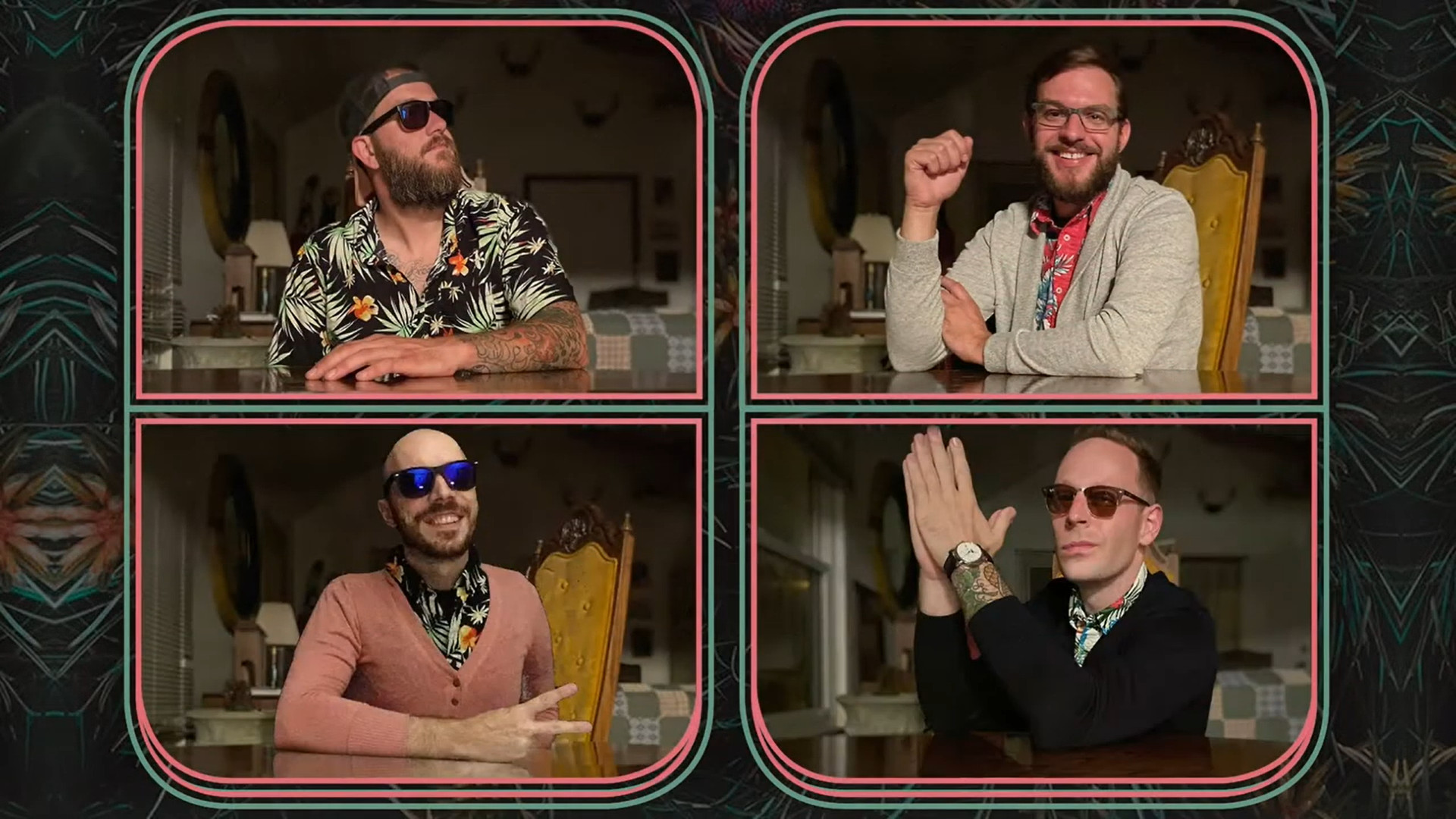 The fine foursome of folks which makes up Kansas City’s “business casual politicore Ozarkian party bro rock” band, Company Retreat, has been a little silent this year. Happily, they’ve come back into our lives with Comfort in Crisis, a new six-song acoustic EP released at the end of July. The EP features unreleased cuts, new arrangements of Company Retreat cuts, and even some songs from the band’s previous incarnation, Bent Left.

We’re so excited about it, we’re premiering the video for “Treat Yourself” below. Originally from Company Retreat’s 2018 Trust Fall EP, the song takes on a new wistfulness in this acoustic form. Check it out, along with my interview with the band’s William Malott and Josh Nelson about the new EP.

The Pitch: Given that your last couple of videos have had storylines and production value, was it hard to pare down for this new one?

William Malott: This video was as unique to our band as quarantine has been to all of our lives. Our good friend, Luke McKinney, came up with the concept and everyone shot their footage individually. Luke compiled it then edited and animated everything together. We were hoping to capture a sense of joy and togetherness within the monotony and solitude that March and April forced on everyone; our band has always been about bringing people together and this video was our best attempt at accomplishing that while working from home.

Josh Nelson: Actually, this one probably required more work from more people than any of our previous videos. We’ve had the privilege of working with some really rad KC videographers/friends in the past, including Brian Slater and Paul Gibson, and they did everything for us. All we really had to do was show up and drink boat drinks. But this video required us to shoot a lot of our own footage, which is none of our specialties. Thankfully, we had the help and vision of Luke McKinney, who is a long-time homie and consummate professional. He not only shot the banana hammock scenes among several others, but he also came up with the visual concept and edited the whole thing together. We’re sure his eyes and ears are still paying the price for putting in as many hours as he did.

Was it just nice that nobody was accidentally set on fire this time?

WM: I am ecstatic that no one was set on fire. It took my hand over three weeks to heal last time!

JN: Ha! We totally forgot to light ourselves on fire for this one. We’ll have to integrate some pyrotechnics into the extended cut.

It’s been a minute since we heard anything from Company Retreat. What have you all been up to?

WM: We spent a ton of time over the winter putting this EP together. It is unlike anything we have done before and required a lot of effort to figure out. We are all really proud of the result. Coming up, we have big plans for an EP and a full-length in the near future. Shows and touring are obviously on hold but we’ll get back on the wagon as soon as we can.

JN: Mostly mastering the art of suspended adolescence, but we’ve also been dabbling in several aspects of adulting. Filling the overwhelming demand for mediocre pop-punk is a full-time job, but we also moonlight as real estate investors, healthcare providers, and other forms of commercial prostitutes.

Were all these songs recorded remotely? If so, how’d you manage it?

JN: We would love to be cool and talented enough to have recorded these songs remotely, but we actually tracked most of this stuff at Encapsulated Studios in St. Louis shortly before the pandemic hit. Gabe Usery did all the engineering AKA turd polishing. He’s really good at hitting the space bar and dishing out subtle insults until we sound like we know what we’re doing.

The tracklisting for the EP is amazing—going all the way back to Bent Left’s USS Awesome for “Application for Federal Assistance” was a nice touch. What was the reasoning behind the song choices?

JN: Thanks for the kind words. We actually chose one song from each of six different recording projects from throughout our bands’ history, including a nearly 15-year-old Bent Left release that predates USS Awesome. Each one was among our mutual favorites.

New cuts, too! Were these written for the EP, or will they see full-band electric versions at some point?

JN: You bet! There’s actually a whole series of unreleased songs that were recorded before we released our first album as Company Retreat. We’ve even got a banjo-driven rap jam that may surface in the future. Regardless, you’ll be hearing more from us soon. Maintaining productivity is company policy.

Company Retreat will be doing a brief Livestream show, performing four songs off the EP. You can watch that on Facebook on Friday, August 7, at 7pm (tonight!).