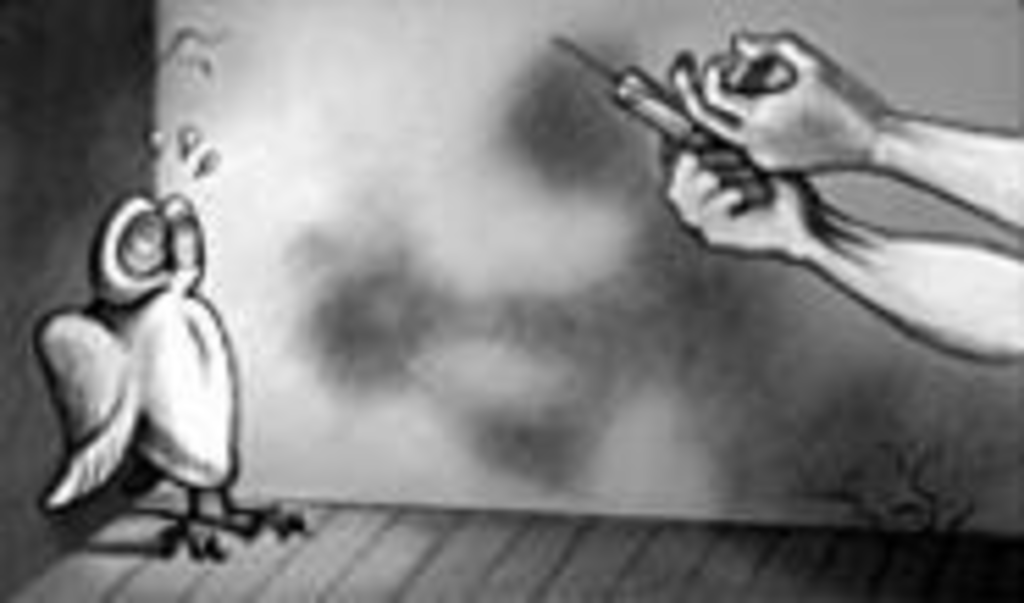 Great horned owls look formidable, with yellow, piercing eyes and pointed ear-tufts, but the injured owl that arrived last winter at the WildCare animal rehabilitation center in Eudora, Kansas, looked weak. Its wing and beak were injured, and it was afflicted by parasites.

The goal of wildlife rehabilitation is to nurse animals back to health and release them as quickly as possible, but it took WildCare director Nancy Schwarting several months to decide that the animal would never heal enough to be freed.

Even so, the owl’s future in captivity looked promising after a zoo seeking a great horned owl contacted WildCare. A Lawrence, Kansas, veterinarian had determined the bird’s injuries were treatable and its ailments curable with antibiotics and anti-parasite medicines.

“[The veterinarian] and I spent about thirty minutes cleaning the wounds and wrapping them,” wrote Lawrence veterinary technician Andrea Yourtee in letters last spring to state and federal wildlife officials. “Many of us were happy that this animal had a home to go to.”

The vet sent the owl back to WildCare to recover. But Yourtee, a volunteer at the rehab center on the grounds of the old Sunflower Ammunition Plant, found the owl’s pen empty a few days later. Her letter alleges that Schwarting had killed the bird and had written on its chart “euthanized after conference with [veterinarian] — not releasable not placeable.” The veterinarian was disappointed that Schwarting had killed the owl after he had told her the owl could be placed at the zoo, Yourtee’s letter alleges.

Yourtee was incensed. This spring, she joined ten other volunteers and staff members who sent harsh complaints to the U.S. Fish and Wildlife Service and the Kansas Department of Wildlife and Parks. They had grown frustrated with Schwarting’s management and had unsuccessfully asked the facility’s board of directors to intercede. One board member had resigned rather than deal with the problems.

So the volunteers gave five weeks’ notice, then staged a mass walkout in May.

“I am not asking that anyone take my word on this,” wrote volunteer Jill Benson in a letter dated May 31, 2002. “Inspect the facility, check the animal records and look at the acquisition forms and final dispositions of these animals. Please. Something is very wrong out at WildCare.”

Federal agents eventually inspected WildCare, and in a widely publicized mid-September raid, they seized 29 birds of various federally protected species. The agents asked veteran wildlife rehabilitator Diane Johnson, who runs Operation Wildlife near Lawrence, to take the birds. Fish and Wildlife officials suspended Schwarting’s federal permit and launched an investigation, but she still keeps a coyote and smaller mammals under a state license. She faces no official sanctions.

Many of the hawks, owls and falcons that agents brought to Operation Wildlife were severely malnourished, and some had received inadequate veterinary care; three had no need of rehabilitation and were released almost immediately. A great horned owl, a turkey vulture and a screech owl had to be euthanized immediately, Johnson alleges. The remaining birds are recovering: Some required surgery; others are rebuilding atrophied muscles by flying inside large pens.

“I have shed some tears over this,” Johnson says. “It has made me sick to my stomach. Because the majority of these problems didn’t have to happen.”

In fact, “these problems” aren’t the worst of what happened over the past ten years, according to the volunteers’ letters:

· On a 90-degree day in July 1993, Schwarting placed a prairie falcon in a Styrofoam container and transported the bird in her car, which did not have air conditioning, volunteer Alison Pearse wrote. Later, the letter states, Schwarting rushed into the facility with the gasping bird, and Pearse assisted in trying to revive the bird for twenty minutes before it died.

· In a similar episode from June 1997, Schwarting took a Krider’s hawk from WildCare for a “public education” program. She put the bird in a “hood,” a plywood box with pencil-width breathing holes, and transported it in her car — again, without air conditioning, Benson’s letter alleged. Schwarting took the bird to work after the program, leaving it on a loading dock for hours, Benson wrote. When a volunteer finally retrieved the bird and took it to WildCare, it was dead, the letter stated.

· In November 1998, Schwarting had determined a great horned owl should be euthanized because of a nerve injury to its right foot. The owl then sat suffering in an animal carrier for months, volunteer Julie Hepburn’s letter alleged. “I was extremely interested in this owl’s plight, as I had fed it, weighed it and observed its beauty, strength and will to live,” Hepburn wrote. “This owl was definitely one to be reckoned with.” She located a Colorado facility capable of rehabilitating such a bird. Schwarting refused, though she had been dissuaded from killing the owl. Soon it was flying “beautifully and successfully” in a large outdoor pen, Hepburn wrote. But the owl was found dead, dangling upside down after becoming entangled in the pen’s nylon netting.

· Hepburn’s letter mentioned a Harlan’s hawk that arrived at WildCare in October 1999. Though its injuries were healed, Schwarting decided to keep the bird for “public education” programs, the letter states, but it was never trained, and it sat in a pen that was too small to allow flight. After state officials in 2001 told Schwarting she had too many birds of prey, she considered euthanizing the hawk, Hepburn wrote. “Managers and volunteers both suggested it would be necessary to evaluate the hawk for flight since it had essentially been ignored for two years,” Hepburn wrote. The hawk was able to fly after rebuilding its flight muscles and finally was released in January 2002.

· A Cooper’s hawk that came to the facility in February 2001 should have been euthanized, according to the veterinarian who examined it, because its fractures would have made it likely to develop painful osteoarthritis, wrote staff member Shannon Ochoa. According to Ochoa’s letter, the bird developed bumblefoot, a painful bacterial infection common to unsanitary bird pens. “This hawk is constantly thrashing about in its pen,” Ochoa wrote. “This is one that should have been euthanized a long time ago.”

· Volunteer Judi Hurla wrote that Schwarting never accepted volunteers’ repeated offers to replace the dangerous nylon netting on flight pens. Even after the death of the great horned owl, Schwarting in April 2001 placed three barred owls inside the same pen, the letter alleges. One got caught in the netting and had to be cut free. It had fractured a wing, Hurla wrote.

WildCare, which started in 1979, operated for thirteen years under the auspices of the University of Kansas’ Animal Care Unit, which is in charge of laboratory animals used in experiments at KU — including dogs, cats, rabbits, gerbils, snakes and lizards. Schwarting had a full-time job at the Animal Care Unit, mostly overseeing WildCare. Employee Amy Albright lived on-site at the rehab center. Another part-time employee, Christy Kennedy, also worked long hours at WildCare for a small stipend.

“She would get so angry, and she would just light into you,” Albright claims, remembering her days on the farm. “She’d say she was going to drop off an animal at a certain time, and you’d wait and wait, then she’d come blowing up the driveway to the farm three hours late, just burning up the gravel, cursing about how she was late to be somewhere else and screaming, ‘Take this damn bird!'”

Schwarting did not return phone calls from the Pitch.

Schwarting then registered WildCare as a nonprofit corporation and kept her full-time job at KU, training researchers how to handle laboratory animals. Bresnahan did not return the Pitch‘s calls.

WildCare now leases the Sunflower Farm from the university for $1 a year.

“As an organization, we are not mistreating animals,” says Mike Fraley, president of WildCare’s board of directors. “We have some definite problems administratively, some issues with U.S. Fish and Wildlife permit requirements as well as paperwork issues. We’re in the process of reorganizing the organization.”

After the agents confiscated the birds this September, Johnson, of Operation Wildlife, learned that Schwarting had committed what many wildlife rehabilitators would consider an ethical violation. Johnson examined WildCare’s eight “public education” birds, several of which had no health problem to prevent their release once they recovered from illnesses they had contracted during captivity.

“This annoys me. And it saddens me,” Johnson says. “If you could be free, if you had the ability to be free, why would you want to be kept in a cage? I just don’t understand why someone would deprive a wild animal of its freedom.”