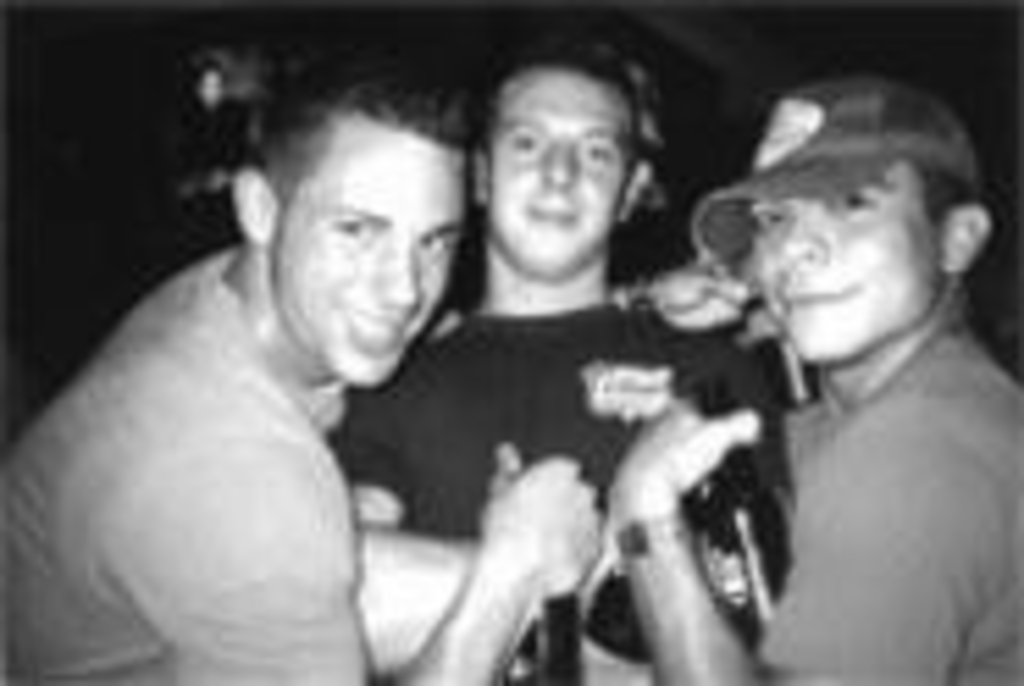 We were on a secret mission up north on a recent Friday night, searching for the new Granfalloon, when we got lost on Barry Road. Then again, our only directions from a friend were: “It’s by a Wal-Mart. It’s not in Zona Rosa but near it.” (You’d think we’d be able to spot a Sprawl Mart fairly easily, but in the strip-mall-happy Northland, this task was harder than expected.) After driving around for a bit, though, the Night Ranger felt a tingle in her left arm, instinctively made a few random turns into one of the labyrinthine strip malls and, lo and behold, drove right up to it.

“Wow. That was freaky,” said Research Assistant and Rangermobile passenger Erik, who was astounded and impressed (and somewhat frightened) by the NR’s homing instinct. Yeah, well, we’d like to think that our alcohol-derived strength helped foster that special talent (along with our catlike prowess). And the fact we were born on another planet. But we digress. After some minor exultation over this new discovery, we went inside to check out the place.

To our surprise, the new Granfalloon wasn’t bad. We were afraid it would be like its Plaza counterpart, which we detest on weekend nights because it’s overpacked with rude pretentiousheads who glare at you if you step into their precious air space. (In fact, the Plaza Granfalloon is the epitome of an aggro bar — the sort of place where you feel, upon entering, the overwhelming urge to punch someone or make nasty comments to some tanorexic gaggle who’s swinging blown-out hair into your drink.) But even though the Northland branch is set up a lot like the Plaza bar, we liked it better because (a) it’s less crowded inside, (b) there’s a sidewalk patio, and (c) there’s a cool rooftop deck (something KC needs more of), which one reaches by ascending a never-ending and precariously slippery-in-heels hardwood staircase. The uphill walk is worth it, though; the deck has high walls (to lessen that I’m-drinking-atop-a-strip-mall effect), four huge TVs and lovely flowering plants.

Naturally, the youngish crowd was also quite similar to the Plaza bar’s clientele; it was heavily into striped shirts, cleavage-baring camisole tops (the chick equivalent of the striped shirt), and “ironic” T-shirts from Urban Outfitters. (Yes, paying $28 for a “vintage” Mr. Owl Tootsie Pop T-shirt is truly hipsterish of you, floppy-haired boy.) However, we have to admit that one such T-shirt caught our attention; on the rooftop deck, we spotted a guy whose T-shirt proclaimed in bold letters on the back: UNIT AVAILABLE.

We made our way over to him. “Tell me about your unit,” the NR purred.

“It’s large and in charge,” responded Patrick, 23. “It accommodates all.”

“Get it, girl,” said his buddy Steve, 27. It turns out that this unit is, uh, up for grabs — Patrick is single. “I’m always looking, always social, always a butterfly,” he told us. We asked if Steve was his wingman.

“We don’t go without each other,” Steve answered. “But we ain’t gay.”

“You mean he’s your fluffer?” we injected. Drunken hilarity ensued (OK, not really), and we took our photos of this merry group. We’d like to point out that it was their idea to pose while kissing their muscles; as much as we’d like to take credit for that, we can’t. Alas.

Soon after we parted ways with the arm smoochers, we ran into an equally jovial duo: Crystal, 26, and Toni, 22. They had just met five minutes before we approached them, and for a brief, shining moment, their conversation consisted of the stereotypical drunk-girl “Ohmigod! I know!” talk. They compared the guy selection at both Granfalloons.

“At the Plaza, there’s an older crowd,” said Toni, a pretty brunette. “Every time I go, there’s a 50-year-old [hitting on me], goddamn it. I want 20 year-olds buying me drinks! I love going here. It’s better for my age.”

Just then, Toni was pulled away by a friend to go downstairs, so she and Crystal made vague plans to hang out again. Numbers were exchanged.

“She won’t call,” Crystal said after Toni left. Ah, the bar hookup — fake on so many levels. We chatted with Crystal a bit more and found out that she’s a Mary Kay rep who’s hoping to get her pink Cadillac this year. She alternated between friendly and suspicious that we were going to make fun of her MK gig. (Uh, why would you ever think that?) Finally, after a bit of awkwardness, we, too, parted ways and went downstairs to check things out.

Speaking of faux hookups, we then ran into Matt, 22, who claimed he got a free lap dance at the bar from a random chick in honor of his birthday. He went to fetch the chick and returned, hand-in-hand, with Toni.

“I got a little hard-on,” he said, looking at Toni. After they exchanged more pleasantries (and re-created their lap-dance poses for the camera), we got the impression that they actually knew each other — which was confirmed when Toni, on her way out, stopped us and said, “Oh, and Matt and I just met tonight, too.”

One other superhero power we’ve also been working on? Our bullshit detector. Which, we admit, sounds way more boringer than, say, teleportation powers. Unless that includes drunkenly and “mysteriously” waking up in a crushee’s bed. Of course, we know nothing about that exploration of new units.