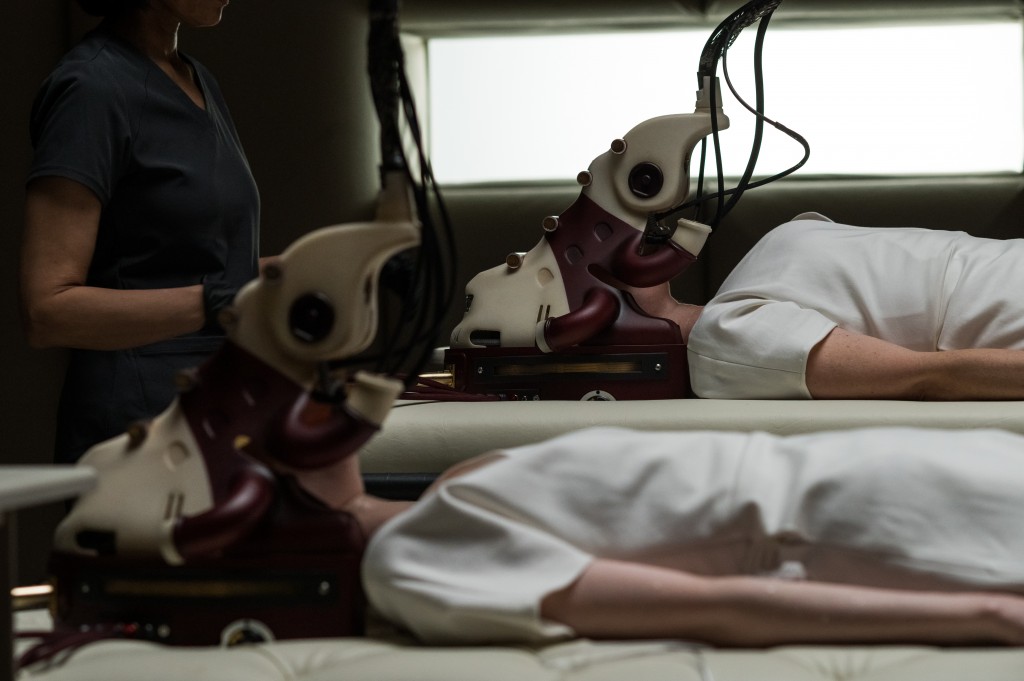 When you think about it, loss of identity may be the scariest form horror can take. Not in the sense of losing a job or ending a relationship that you tie your identity to, but in the sense of losing your understanding of yourself entirely. When you don’t have self-knowledge, you no longer understand the forces that motivate you. You do things, but you have no idea why you do them. You have no control over your actions or reactions because you’ve lost your understanding of your interior patterns entirely.

Brandon Cronenberg’s Possessor has a few different ideas running through it, but its ideas about identity are its most interesting. Cronenberg’s clinical, violent sci-fi horror film contains lots of upsetting imagery and squickiness that owes everything to the influence of his father, body horror master David Cronenberg (the elder Cronenberg’s influence might actually be a little too heavy). The concepts at the movie’s core, though, are fascinating, conveyed incredibly through outstanding lead performances from Andrea Riseborough and Christopher Abbott.

In the near future, Riseborough’s Tasya Vos is an assassin for a shadowy corporation that takes a tech-focused approach to contract killing. Using a creepy link-up system, Tasya essentially possesses the body of another person, and uses that body to complete a hit, closing the loop by making the person she’s inhabiting kill themselves. Tasya is an experienced pro, but she’s done this for long enough that she’s become desensitized, and has lost any sense of her identity that isn’t tied to imitating someone else’s behaviors.

This becomes an issue when Tasya is assigned to take over the body of Colin Tate (Abbott) to complete a contract against Colin’s wealthy father-in-law, data mining entrepreneur John Parse (Sean Bean). In trying to complete the job, Tasya has difficulty subduing Colin’s strong personality. Colin’s attempts to regain control of his own body violently mix with Tasya’s confused desires about her own life, particularly with regard to her estranged husband (Rossif Sutherland) and young son (Gage Graham-Arbuthnot).

The film’s distributor, Neon, is touting Possessor in its “uncut” form, presumably as a way of trading on its most intense elements. It’s effective advertising, and there are some wild moments that live up to that promise–the poster-featured image of Riseborough’s sagging face chief among them. However, anyone viewing Possessor with knowledge of David Cronenberg’s work will be fairly unsurprised at what they see. Brandon Cronenberg absolutely proves he has the goods here, but his vision, impressive as it is, remains somewhat indistinguishable from his father’s iconic stamp on the genre.

The real strength of Possessor lies in the push-pull performances of Risborough and Abbott. As Tasya, Riseborough is scarily distant and subdued. An early scene sees her outside her husband’s home, practicing reactions that make her sound loving and engaged. She’s a fantastic, frightening cipher.

That dullness clashes fantastically with Abbott’s louder, more bombastic performance, giving Tasya the catalyst to live into the violent urges inside her. Abbott has the daunting task of having two warring personalities inside him, as well as maintaining the mystery of who’s really in control in a given moment. He pulls this off seamlessly. The fascinating rabbit hole of questions presented by the way these two personalities meld and bounce off each other is what gives the film its real juice.

Possessor shows strong promise for Brandon Cronenberg in the ideas he explores and the performances he draws out of the actors he works with. There’s also a compelling artistic vision at work here, though the amount of originality it displays still leaves a question mark. That aside, Possessor is a solidly made piece of sci-fi horror, filled with meaty, philosophical questions. It may not be wholly unique, but the payoff is massively satisfying.

Possessor is currently playing at the Screenland Armour theater, and will hit VOD and on-demand soon.