Plug Projects counts the steps to and from the built world 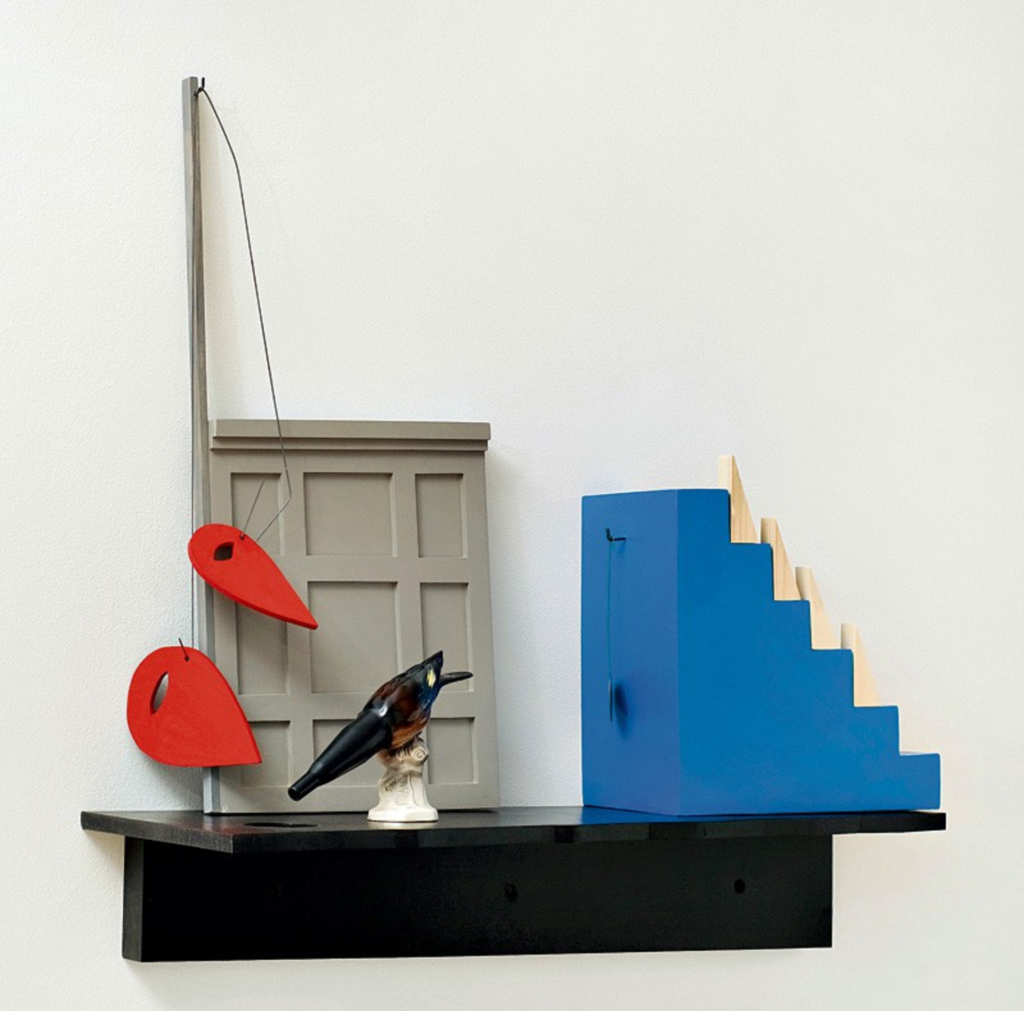 Superstruct‘s construct is simple: The five artists in this show have assembled work about man-made environments.

At times, though, the essay for the fourth exhibition at artist-run Plug Projects veers past simplicity toward unhelpful broadness: “The use of collage, layering of paint, and construction within a pre-existing space parallels the building methods found in the everyday urban environment.” That description could apply to almost any object-based work. Superstruct is more focused than that, a collection of smart-looking and intelli­gently conceived art.

Brady Haston’s paintings could be drawn from foggy memories of cityscapes. In “BGM,” the Tennessee artist renders the letters b, g and m in logolike typefaces — they’d pass fine on billboards or strip-mall signs — against a brushy, Easter-egg-colored background. In “Behind the City,” a stark silhouette of an industrial-looking structure stands against a field of pastel colors. Haston’s paintings suggest a 21st-century analog to the Impressionists’ quick perceptions of city life in paint. His works are even more spare and reductive.

Stairs feature prominently in Superstruct. Two of New York artist Stephanie Snider’s three collages include them. Another staircase appears in her untitled mixed-media sculpture, which resembles one of her collages expanded into three dimensions. Here, a small wooden shelf supports the staircase, a bird figurine, a paneled wall and two guitar-pick-shaped objects hanging from wires — a sculptural element reminiscent of Alexander Calder’s mobiles. If Haston’s work seems concerned with our memories and impressions of cityscapes, Snider’s seems rooted in the interior and the unconscious. Her groupings of architectural references prick at rationality like Surrealism.

Kirsten Kindler’s “Salon M II” finds more steps, a circle of staircases and ladders leading nowhere. The Virginia artist cuts out images from magazines and layers them on mylar to create delicately raised collages. Your eyes travel up and down steps, rungs and balusters, but the cutouts never find their way out of the loop.

The site-specific work here is most engaging. Brooklyn artist Sonya Blesofsky and Kansas City artist Juniper Tangpuz have found inspiration in the building occupied by Plug Projects and the surrounding neighborhood.

When researching the history of the West Bottoms, Blesofsky discovered a photograph of a window of a building near the base of the 12th Street Bridge following the flood of 1951.

“The image was, for me, very haunting and surreal,” Blesofsky says. “A Wizard of Oz scene where all the furniture from an office had been picked up with the high water and floated to the lowest point of the building.”

Blesofsky has constructed pieces of furniture inspired by those in the photograph — a ladder, a table and chairs, drawers, a bed — out of vellum, tape and hot glue. The front window of the gallery frames the ghostlike forms of the furniture, just as in her found photograph.

Tangpuz’s “Spatium” occupies the narrow alley between Plug and the adjacent building. The installation is a shrine, a mishmash of architectural elements from different cultures, and constructed out of corrugated plastic and inspired by abandoned objects that the artist discovered in the alley.

“I found a Pepsi can, the ones they manufactured in the ’60s with the pull tab, that inspired me to make the onion dome of St. Basil’s Cathedral,” Tangpuz says. “The fan blade of the air-conditioning unit turned into the Lakota medicine wheel. The rubber snake I found turned into Quetzalcoatl, the feathered serpent.”

Step onto the wooden platform and look through the shrine’s window, and the detritus from the alley, mostly discarded alcohol bottles, is lined up on display. Tangpuz plans to recycle the plastic that he used for the exterior — and to leave the trash where he found it.

“Before, people threw their empty bottles with no care,” he says. “But now, willing or not, they contribute an offering. When the show is over, it will return just as I found it.”

But Tangpuz’s shrine to things left behind is affecting enough to stay with unsuspecting passers-by who encounter the work on their way down the sidewalk.