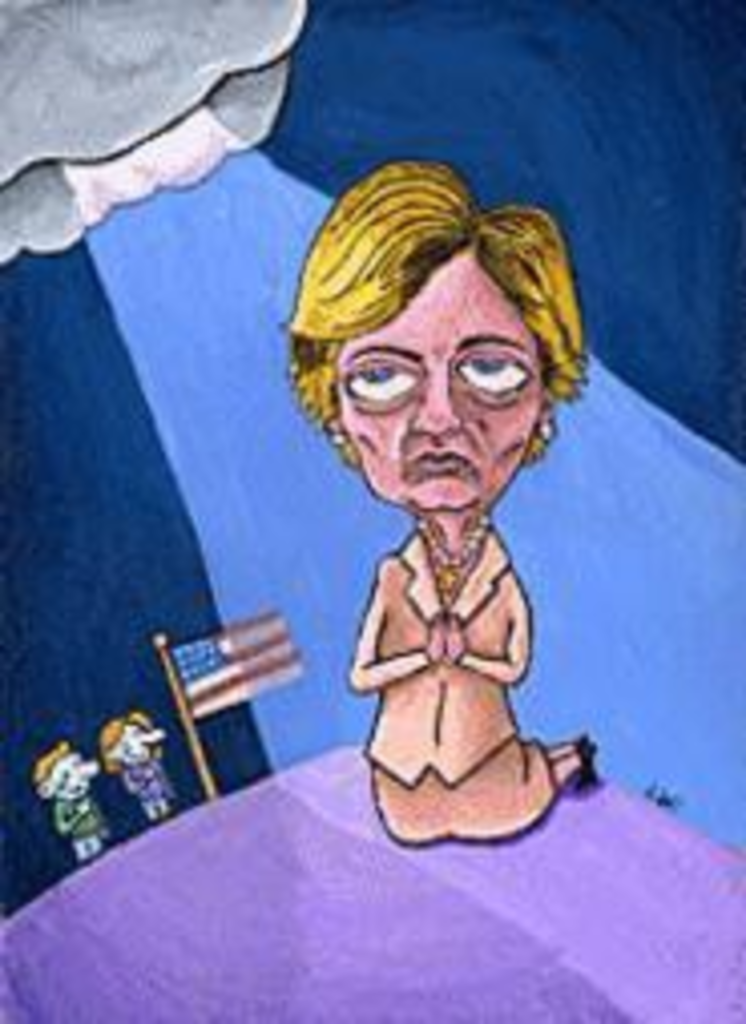 Kansas Citians destroyed homes, blew up vans and killed themselves with fireworks last week in an effort to prove terrorists haven’t won.

The holiday had extra meaning this year because just one week earlier, a California court had threatened our way of life by tossing out the Pledge of Allegiance. But response from members of Congress was swift after Ninth Circuit Judge Alfred T. Goodwin ruled that the words under God made the pledge unconstitutional.

The first person to send the Pitch a statement denouncing the decision was Senator Jean Carnahan.

“Today’s ruling by the Ninth Circuit Court is absurd and deeply disturbing,” Carnahan wrote on June 26. “The Pledge of Allegiance is as American as the Fourth of July. And as families all over America gather next week to celebrate freedom, I believe that now, more than ever, they will want to express their patriotism. I am certain that this ruling will be overturned.”

Carnahan had nothing to worry about. Goodwin put his own ruling on hold the next day, and the Fourth of July remained a holiday.

At Parkville’s annual Fourth of July carnival last week, Carnahan appeared relaxed as she sucked down an icy beer. “I was deeply concerned,” said the senator, “that Americans would not be able to celebrate freedom today.”

Carnahan’s eyes narrowed as she watched the suspicious-looking Ali Baba spin its carloads of children nearly out of control. “I’ll tell you what else was sogging my Grape Nuts,” she said. “I wanted to be able to express my own patriotism.”

In fact, on the day of Goodwin’s ruling, Carnahan’s pro-American statement arrived at the Pitch office via fax at 4:13 p.m., well before a comment by Republican Jim Talent. An e-mail from Talent, who is challenging Carnahan in one of the country’s most closely watched races, expressed similar sentiments in much less flowery language. His statement arrived at 4:55 p.m. on June 26.

“Hot damn!” Carnahan roared when informed that she’d beaten her rival by 42 minutes. “I’ll drink to that!”

Late for her next engagement, Carnahan was quickly escorted to an idling Ford Expedition that had been blocking traffic on Highway 9. The sport utility vehicle did a squealing U-ee in front of a family of four, who dropped their 82-ounce coozie cups trying to scramble out of the way.

In English Landing Park, the wait for rides and Sno-Cones was long, reflecting the country’s patriotic mood. That morning’s Kansas City Star had carried the news that Governor Bob Holden had signed a law requiring Missouri’s public-school students to say the pledge once a week. “We must work to instill the importance of preserving American democracy in our young people,” the Democrat said of the forced-speech law.

Standing in line for a frosty, second grader Kaitlin Bixby said she was worried about how she would comply with Holden’s new mandate. “School doesn’t start for a couple more months.”

When we caught up with Carnahan earlier this week, she was aggravated that Holden had grabbed the Fourth of July headline. “That bald twit,” she said. “He’s just trying to fit in.”

Despite her annoyance with the governor, the senator was in a reflective mood.

“I remember the year Congress added the words under God to the pledge,” she said. “It was 1954, the same year Mel and I were married. We used to sit in front of the old RCA watching the McCarthy hearings.

“I have such fond memories of that time,” Carnahan added, “which is why I’m happy to announce that I’ve joined my old adversary John Ashcroft in a bipartisan effort to make sure that all Americans appreciate their freedom.”

Carnahan said the war on terror demands that all Americans set aside their differences. Ashcroft has ordered the Ninth Circuit judges to go back to their chambers until they get it right.

“The Justice Department will defend the ability of our nation’s children to pledge allegiance to the American flag,” Ashcroft said in his June 27 statement. “At this time when citizens from all backgrounds have come together to express their solidarity as Americans, this Justice Department will spare no effort to preserve the rights of all Americans. These efforts include ensuring that the youngest among us can express their patriotism through the time-honored tradition of voluntarily reciting the pledge.”

“There is no pledge but the one ‘under God,'” Ashcroft told the Pitch. “Just like there is no king but Jesus.”

Reached aboard Air Force One en route to a Republican fund-raiser in St. Louis, President George Bush told the Pitch that “the pledge is constipational just the way it is. Besides, if we don’t watch out, it’s gonna be ‘one nation, under Allah’ — and who would want to say that?” Bush said he was glad that the Missouri Democrats were acting like Republicans, but that wasn’t going to stop him from helping Talent kick Carnahan’s ass.

“That’s it,” she said. “I’m going to start a campaign to make ‘God Bless America’ the national anthem. ‘God’ doesn’t show up until the very last verse of ‘The Star Spangled Banner,’ and nobody can sing the damn thing anyway. I have a race to run. I’ve gotta beat that little bastard.”