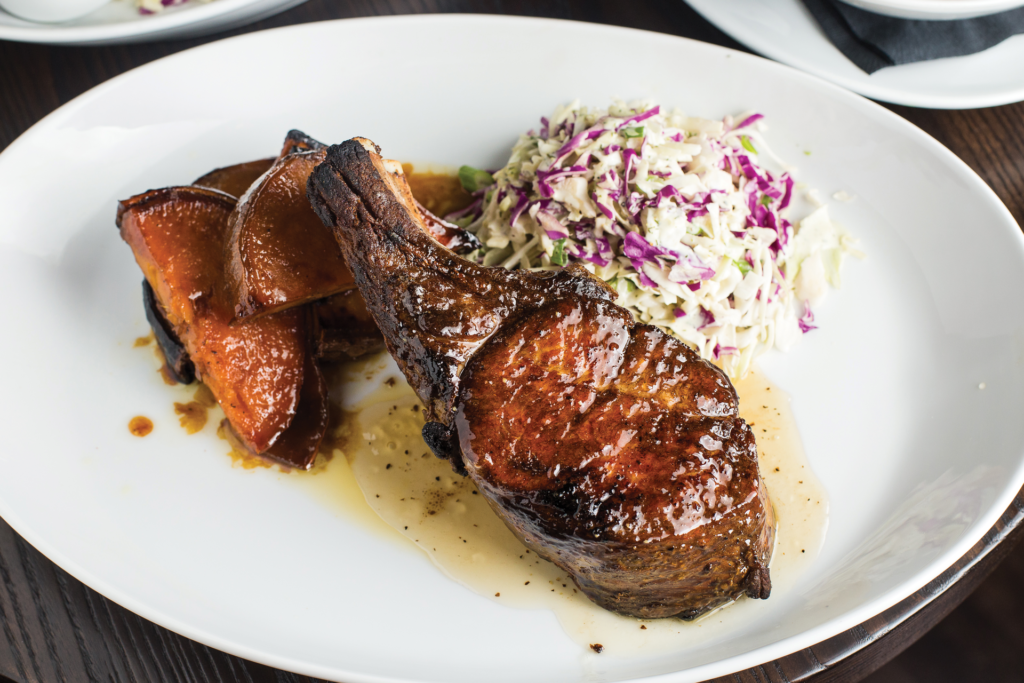 A few phrases fill me with instant dread: “The President has tweeted.” “Cash bar.” And lately: “Elevated comfort food.”

What started as benign ad copy has curdled into a malignant sign that I’m about to pay $20 for mac and cheese served in a cute cast-iron pan sized for the slender paws of a small weasel.

At Parkway Social Kitchen, the latest project for restaurateurs Zach Marten and Bret Springs, the fancy-mac tradition is alive and well. Parkway’s website boasts of “rustic elegance” and “elevated comfort foods,” and the food is, with little exception, comforting. But a timid menu and a disappointing bar program add up to a restaurant that has yet to elevate itself to its potential.

Six months ago, Parkway Social Kitchen strolled into a cozy corner spot on Ward Parkway formerly occupied by Coal Vines. The restaurant’s floor plan has improved from its Coal Vines days: the new dining room feels convivial and casual, wrapped around a slender bar that enlivens the space without dominating it.

Local restaurant groups Back Napkin and Trident collaborated on the design, which feels like a cozier version of Don Draper’s Park Avenue apartment. The style is subtle midcentury, with plenty of warm wood and channel-tufted black leather. The resulting atmosphere is both upscale and unpretentious, the sort of place where you can imagine a man in cargo shorts sharing tots with a dressed-up blind date. 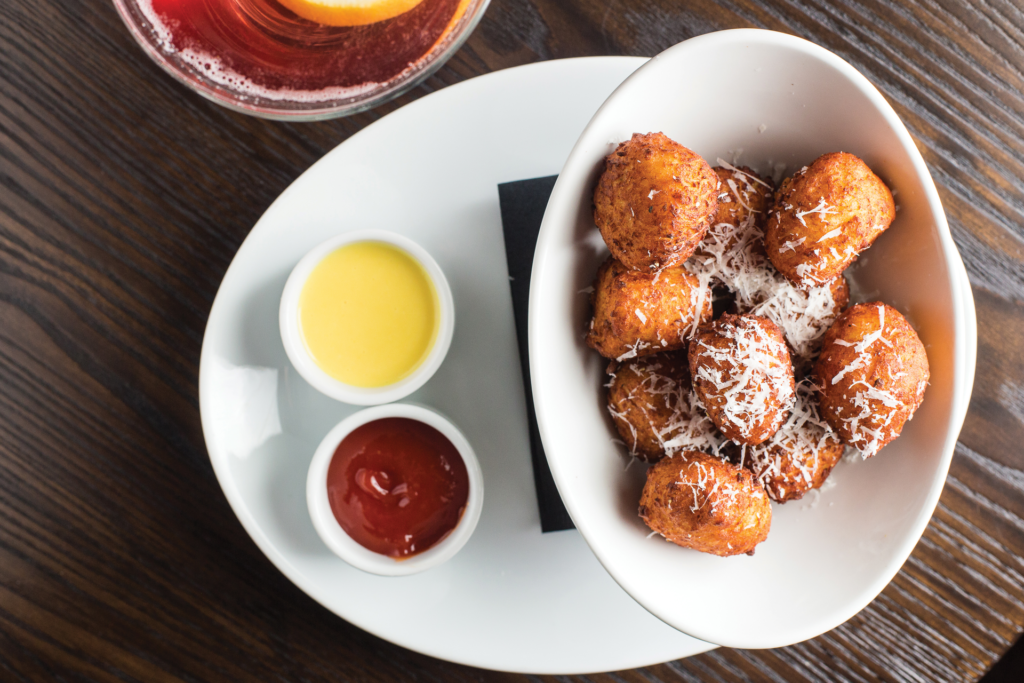 About those tots: Parkway’s appetizer selection is modest, but the pepper-jack-stuffed tater tots — really, croquettes in a t-shirt — are the undisputed star. The ones I ordered arrived seven to a bowl, each the size of a hushpuppy and the color of a deep-fried gold medal. The breading was crisp, the stuffing was rich, and the interiors were tender but held their shape. The tots arrived alongside cups of honey mustard and ketchup. Neither of those sauces made a whole lot of sense to me, but the pepperjack was unassertive enough that it didn’t compete.

The dinner menu is an odd mix of midpriced sandwiches and black-tie entrees. Although much of the menu was already in place when executive chef John Hammack (formerly of Houston’s) climbed aboard, he’s executed it competently. The “gourmet mac and cheese” here almost earns its $16 price tag. In the version I tried, the house blend of pepper jack, cheddar, and cream cheese melted into a thick, velvety sauce that swaddled each toothy cavatappi noodle. The portion was generous, and the accompanying Caesar salad arrived with attractive, well-seasoned cornbread croutons. But the flavor profile was more classic and kid-friendly than “gourmet.” I wouldn’t say no to a stronger-flavored hard cheese in the mix — or some more grown-up toppings.

As classics go, I preferred the tuna salad sandwich. The delicate flavors of Parkway’s steamed, sushi-grade tuna shone through the minimalist mayonnaise-and-onion dressing; the only adornments were hearty slices of bread toasted an appealing walnut-brown.

Parkway’s bolder offerings — and “bold” here is a fairly low bar to clear — feel less thoughtfully composed. I’m thinking of a grilled chipotle chicken sandwich with an inexplicably butterflied breast. Though the flavors were solid, the chicken was too thin, tasting less like the main event and more like a layer of meat frosting.

The prime rib sandwich was decidedly meatier, piled high with pleasingly pink ruffles of wafer-thin prime rib and plated alongside a savory cup of jus. The “housemade French baguette” was thin, pliable and whisper-soft; I’m partial to a chewier bread for my dips, but it held up well to the jus. Still, I expected something transcendent given the $19 price tag. The caramelized onion cream cheese spread was too meek — most of the flavor punch came from a cup of uninspiring horseradish sauce that could have been siphoned from a certain fast-food chain.

The sandwiches come with a generous portion of seasoned fries. I sampled a few on each visit, and they were consistently crisp and comforting. Seasoned French fries are the kind of thing that keeps me up at night: show me a thick, spice-rouged fry, and I’ll show you a girl who’s already imagining licking the salt and paprika from her fingertips. Parkway’s fries almost live up to the fantasy. The color is there, but the spice blend needs a boost. 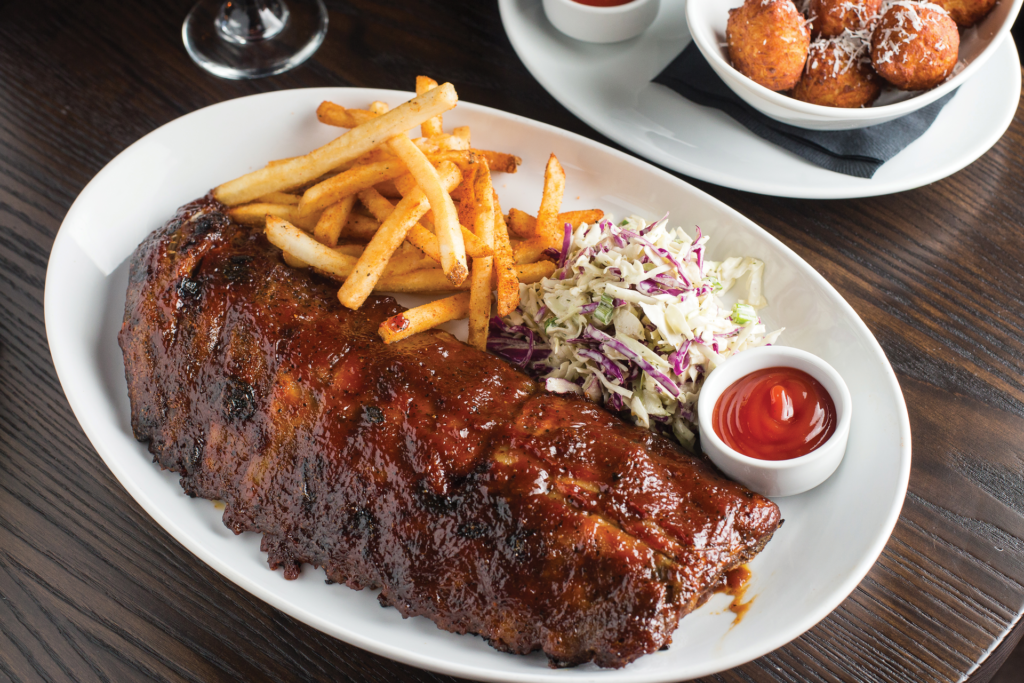 And I had no reservations about the Prairie Farms pork chop, which showcases Hammack at his best. The 16-ounce chop is seared in a wood-fired oven, giving the pork a faintly smoky profile and slightly charred edges. When I ordered it, the apple-bourbon glaze was tangy and molasses-thick, and each bite was moist and fork-tender. I was no less enamored of the accompanying sweet potato slices, which are thick as steaks, roasted until soft and creamy, and brushed to caramel sweetness with a maple glaze.

The Danish baby back ribs were solid, though in a town famous for smoked meats, the standards are perhaps unfairly high. Hammack cooks them well: the meat is fall-off-the-bone tender, if a little bland on its own. (Without a smoker on the premises, Hammack has to make due with liquid smoke — I’ve zero issue with this method, but he could use a heavier hand). But the star is the house barbecue sauce, which is perfectly balanced: a little sweet, a little tangy, a little fruity. An astringent side of dill slaw provides an ideal accompaniment.

I had high hopes for the roasted half-chicken, which at Parkway is brined and wood-fired. I tempered those hopes when my server apologized after I ordered it. “I’m sorry,” she said in a conciliatory stage whisper, “but the chicken has both white and dark meat. Is that OK?”

Yes, that was OK. I love roast chicken with a passion I reserve for few things — chubby dogs, dirty martinis. And I’m used to dark meat getting the short shrift. Many diners would prefer the whole chicken were a Lovecraftian assemblage of boneless breasts, flapping limply around the coop like a sedated eel. I expected the leg and thigh meat to be treated like an afterthought.

Instead, they were perfect, the crisp skin lightly kissed by a wood-fired flame. The breast was the trouble: the flavor was sharp, but the meat was overcooked to a chalky, mealy texture. The sides smoothed things over. I’m still thinking about a forest of tender broccolini draped in a sticky web of grana Padano and a hill of rustic mashed potatoes that were creamy, if a bit underseasoned. 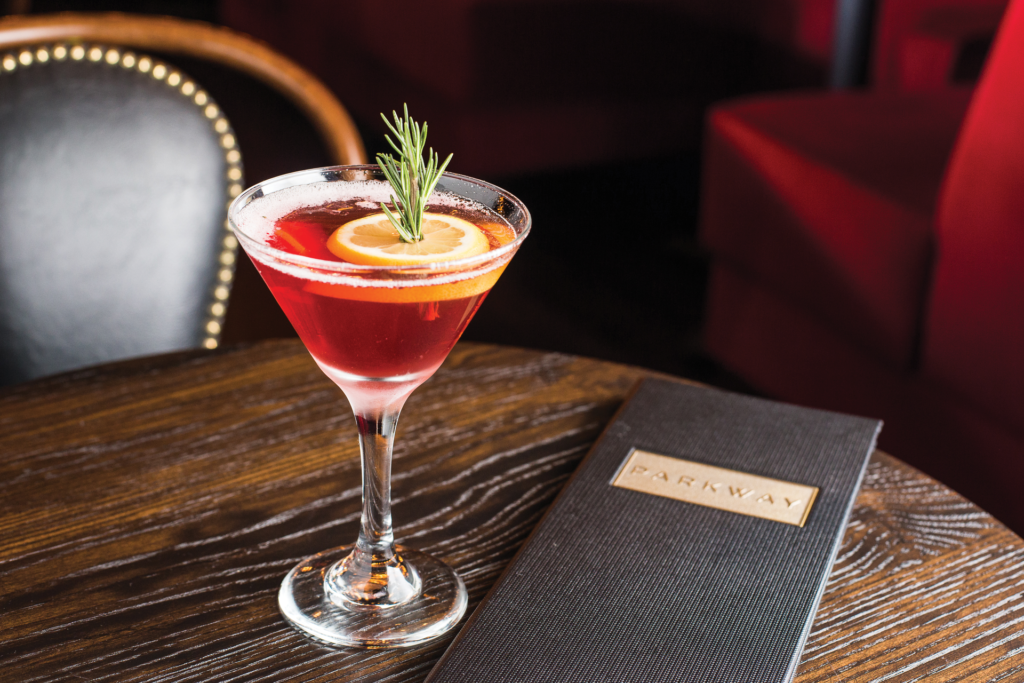 A bigger problem: although Parkway Social Kitchen feels like an ideal place to grab a drink, the drinks aren’t yet worth grabbing. The ambience is cocktail-hour hip in both the main dining room and the lounge, a secluded basement area where jazz trios swing and patrons perch on red velvet couches framed by riveted metal columns and glitzy damask wallpaper. But the cocktails need work. Parkway’s menu has seven permanent options — all of which are sweet, and nearly all of which are too sweet.

The Lady Ella looked great on paper: rosemary-and-pear-infused gin, a stiff ginger liqueur, cranberry juice. In person, the drink tasted harsh and sugary, crying out for tarter, brighter notes. The King of Swing had a bit more body, thanks to a generous splash of St. Germain. But a syrupy sweetness crowded out the other flavors. I could detect neither the characteristic bitterness of the promised Aperol nor the acidic bite of the grapefruit and lime. The Last Word was the best of the drinks I tried, largely due to an assertive warmth from the green Chartreuse that could tame and temper the sweet. Still, I’m not sure I’d order it again — and I like Parkway’s vibe enough that I’d love to sit and sip on something.

In atmosphere alone, Parkway Social Kitchen is a novel addition to the Plaza. It’s rare to find a space that feels both Chiefs-game casual and date-night cool. But diners have more than a few nearby options for comfort food at fine-dining prices. To live up to Parkway’s promise, Back Napkin and Trident may need to spend less time elevating the classics and more time elevating what makes their food and drinks unique.