The infamous pink building, known as Splash of Life KC, has been a topic for debate for years. 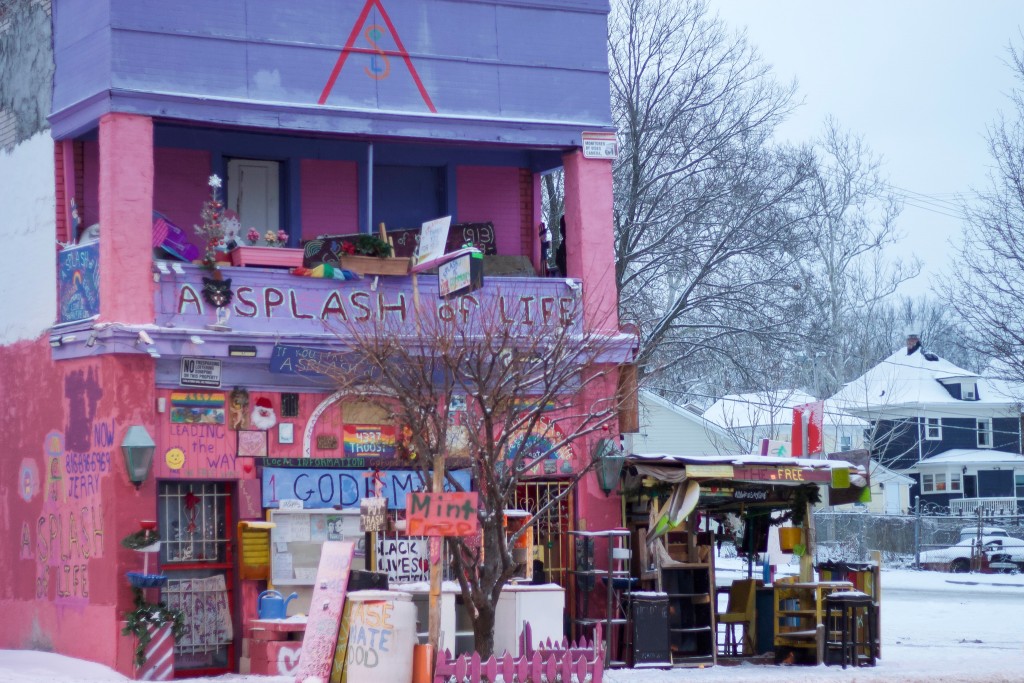 Update: 2/12/2021 6:40 p.m.: Comments from the Public Information Officer for the city’s Neighborhoods and Housing Services Department, John Baccala have been added to the bottom of this article.

Anyone who has traveled down Troost knows it: the Pepto-Bismol-pink building that sits on the corner of Troost & East 44th Street. The building, owned by Jerry Crowell, has been on the dangerous buildings list since 2008, and given a combination of a recent fire and multiple complaints, it has finally been issued an emergency demolition order.

Crowell originally purchased the building for $8,000, with hopes of turning it into some type of community/theater space. Due to a lack of funding and Crowell’s big heart for the houseless community, he turned the outside of the building into an open-air clothing drive and location where he frequently gives food to people, but the outside of the building and adjacent lot (which Crowell does not own) have become a hangout place for mainly houseless men and women.

For the most part, the community and business owners near Splash of Life do not disapprove of Crowell donating to people in need, but the issues arise from people that allegedly use the lot to sell and do drugs, have sex, and loiter on the property as well as the condition of the building. 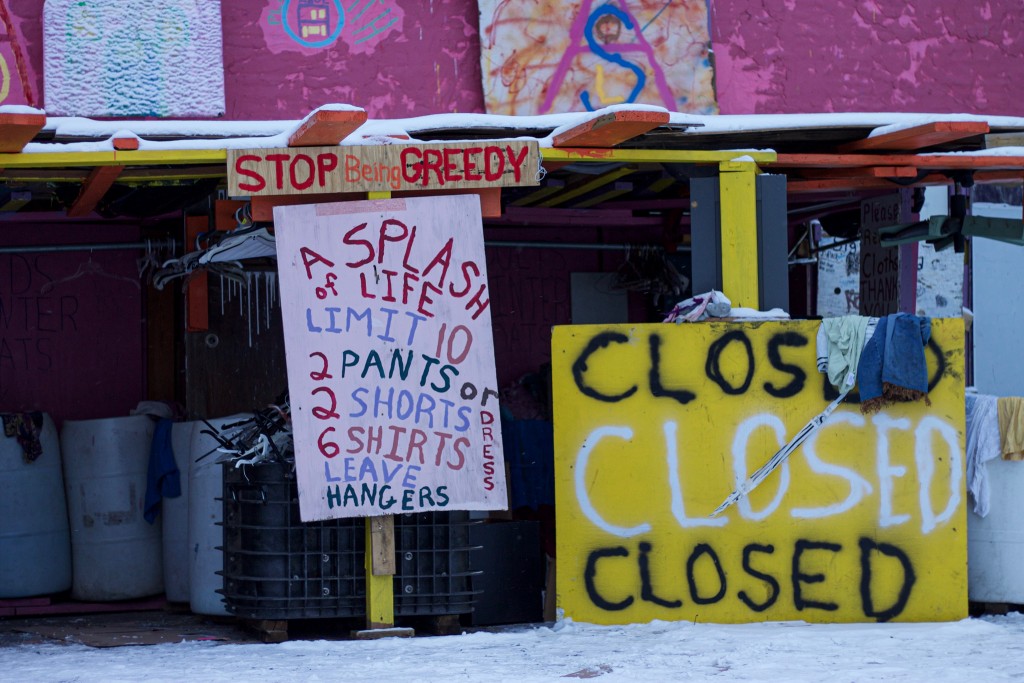 A closed sign outside of Splash of Life. // Bek Shackelford

Cierra Parham and Timesha Smith, co-owners of Dream Palace Education Center, the next door neighbor of Splash of Life, feel strongly that Crowell is not the issue but rather the crowd that Splash of Life sometimes attracts is the issue. While they did have issues when first moving in to their location at 4329 Troost in 2018, such as finding uncapped needles, both women described positive interactions with Crowell and claimed that he is always willing to clean up after anyone who has left things behind on the property and will shovel snow for the daycare. They also mentioned that they very seldom had issues with the people that loiter on the property.

“As of recently, we haven’t really been having any issues,” says Smith, “If we do have any issues we’ll talk to Jerry and, he says ‘Oh, I’m sorry you know I’ll clean, whatever it is up’ and he’s usually really good at, you know, keeping people from behind our building now.”

“Of course with anything you try and do for the community,” added Parham, “You are going to get some good and bad company.”

Dontavious Young, owner and general manager of Equal Minded Cafe, a coffee shop adjacent to the daycare, has dealt with the brunt of issues from people who loiter at Splash of Life. He and his grandmother, Vicki Smith, who owns the building Dream Palace operates out of and other property on Troost, have made multiple complaints to the city about the conditions of the building and have asked police to patrol the area multiple times.

Young was also quick to state that Crowell personally is not the problem.

“Jerry has a good heart.” Says Young, “And that’s how he gets a lot of people to assist him, per se, financially and in other ways. But he has a very good heart I do, I truly believe that what he’s doing there is not good for the community because he enables people to sit there and do kind of whatever they want all day and all night.”

Young claims that he and many other community members from the Manheim Park neighborhood and surrounding areas have attempted to assist Crowell, some of which have even offered to partner with him or sponsor him so that he can either renovate or relocate, but Crowell refuses.

“During the day, it’s not as bad but for three or four months leading up to when the fire happened it was getting really bad,” says Young. “They started like building a huge hangout area like you know seating they found like a couple of old couches and had them over there and a bunch of folding chairs and they started building a tent over there and it was mostly a few a few guys who were always there.” 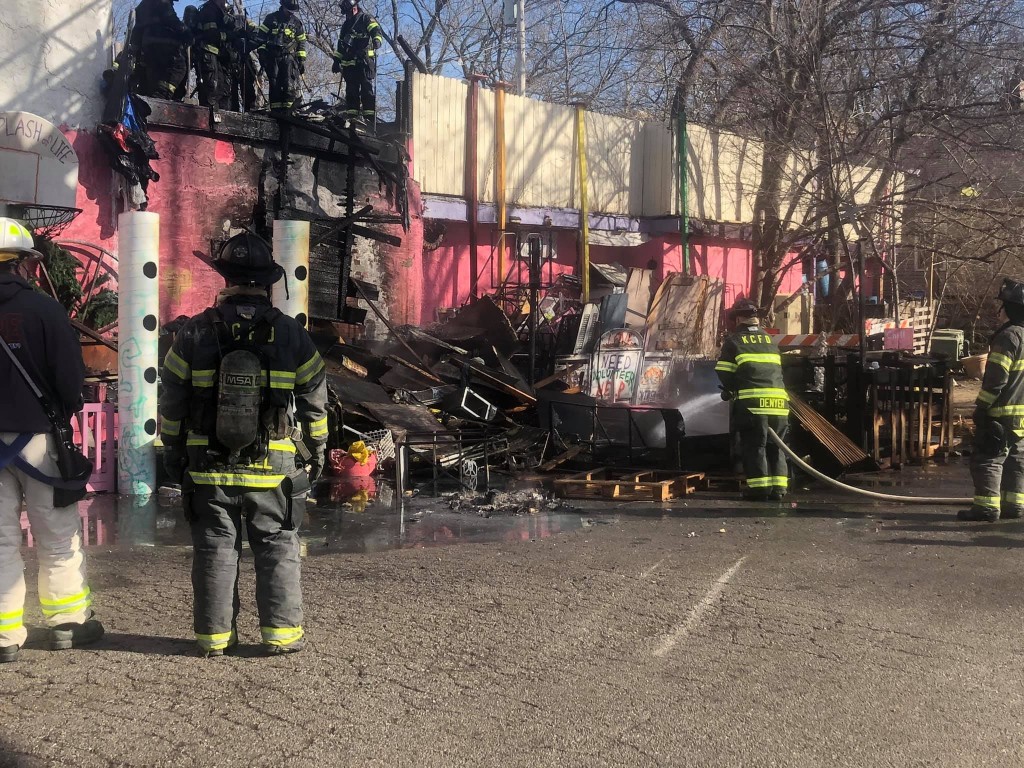 The seating area Young describes was one of the main reasons for the fire that started January 23rd. The fire was lit in a barrel by a person on the property likely trying to keep warm, but it spread to the seating area then climbed to the top of the building causing further damage to the building.

“Jerry is making people comfortable. You know what I mean, he’s making homeless people too comfortable, and some people might get angry at me saying something like that, but when you’re making them top comfortable, why would they want to improve their life? Why do they want to get better or get help, they don’t want your help? ” says Young. “If we want them to do better we need to push them into something that’s uncomfortable where they do have rules and regulations.”

According to the city’s open data website, the building is in the bidding process and the demolition has not yet been scheduled.

John Baccala from KCMO’s Neighborhoods and Housing Services Department informed us via email that the building has been on the dangerous building list since before Crowell took ownership but that due to a February 8th roof inspection which failed, the city has had to move forward with the demolition process. Crowell has been given a 30-day notice to remove his possessions and nothing will be done to the building until March 4th. Additionally, Crowell could potentially file for a temporary restraining order to temporarily halt the process, as he has done in the past.