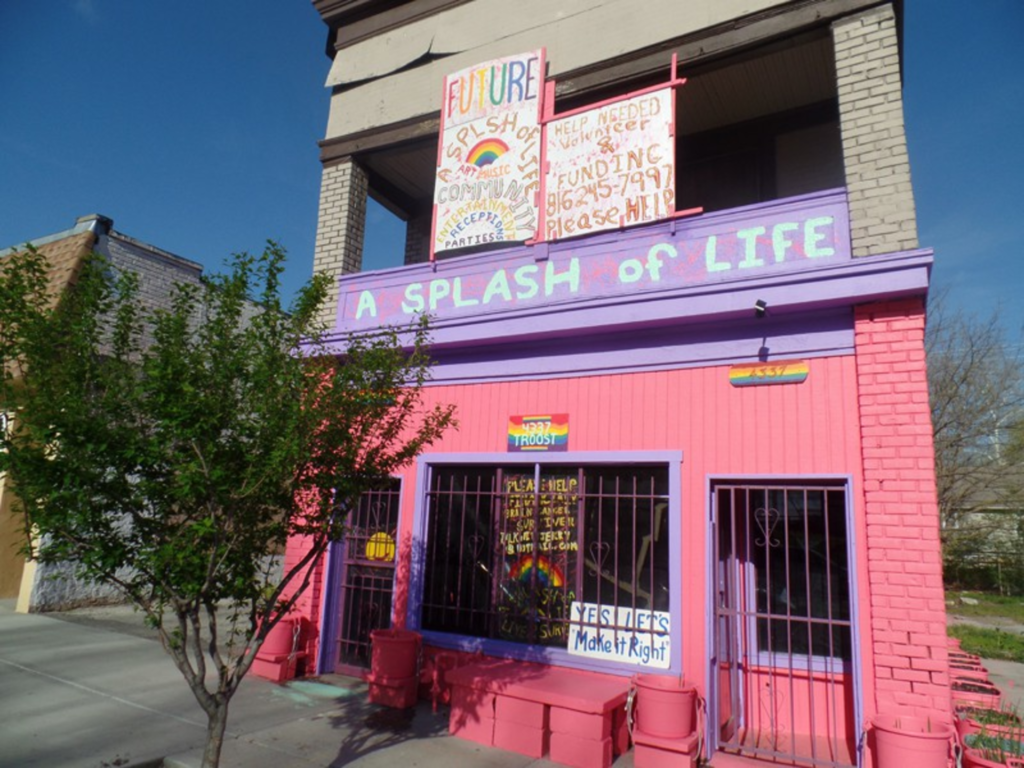 If you’ve driven on Troost Avenue with any regularity over the past year, you’ve probably seen Jerry Crowell’s building at 4337 Troost. It’s hard not to notice. The lower level is painted a vivid pink, with purple trim.

“I thought the paint was red when I got the paint,” Crowell says, “but when I opened the first can and saw the color, I felt it was an omen.”

Not all of Crowell’s neighbors in the historic Mannheim neighborhood have been pleased at this omen.

“One of the board members of the Mannheim Neighborhood Association came to me while I was painting and said, ‘Please don’t paint the building that color. I’ll pay to have it painted any other color,’ ” Crowell says. “But I told him that I like this color.”

The other eye-catching features of Crowell’s building are the hand-painted signs announcing his future plans for the site and his need for donations. Crowell wants to turn the dilapidated two-story structure —  it’s been on Kansas City’s Dangerous Buildings list since 2011 —  into a combination community center, theater space and catering kitchen that he’ll call A Splash of Life Center. (He’d also like to live on the top floor.)

“If I could live in the building and make some money renting out the first floor, I could make a life for myself,” Crowell says.

Making a life isn’t just small talk from the diminutive Crowell. Two decades ago, the Leawood, Kansas, native (his parents still live there) had returned from Los Angeles, where he was trying to break into the film business, when he was involved in a car accident in Kansas City. While checking his injuries, the emergency room physicians discovered that Crowell had a brain tumor.

“It was brain cancer,” Crowell says. “I had a nine-hour operation and radiation. It’s caused all kinds of side effects, affecting the way I walk and talk.”

“Jerry is impaired, but he is not disabled,” says artist and Troost neighborhood activist Bill Drummond, who has become Crowell’s friend and supporter.

“Jerry has never had the experience interfacing with the world of official ways,” Drummond says. “He’s never had to deal with bureaucracy.”

Crowell faces a learning curve. When I asked him if he had established Splash of Life as a 501(c)(3) nonprofit organization to collect tax-free donations, he asked, “What is that?”

At this point in this project, Crowell needs some kind of cash infusion, donations or otherwise. Most of Crowell’s monthly disability check goes to pay the interest on his mounting credit-card debt.

“Some people have offered to help me with physical labor on the building, but they never follow through,” Crowell says, “One guy promised to help me fix the brickwork, but only if I paid $900 to get his truck fixed.

“I don’t want a partnership thing,” Crowell adds. “Partnerships are where the big problems start. A partner will come in and take the building away from me. This isn’t about money, it’s about me trying get help help to finish this building.”

On the wet day that Crowell showed me the interior of 4337 Troost, the rain outside had stopped, but inside the structure water was still dripping from the rafters. The building no longer has a roof over the second floor, and rainwater was soaking piles of toilets, lawnmowers and furniture that Crowell has stored in the space.

“The roof was holding the building together,” says Seft Hunter, a local real-estate agent and president of the Mannheim Neighborhood Association. “It’s on the Dangerous Buildings list and slated for demolition. Jerry bought the building knowing this. You can buy buildings on this list, but you can’t inhabit them until you bring them up to code. He’s way over his head with this project. The neighborhood isn’t fighting him. He’s free to make his own decisions. We’re sitting back and letting it play out.”

Crowell paid $8,000 for 4337 Troost. He bought it from an organization called the Houston Space Society. He says he has already spent, including the initial purchase, at least $80,000 on the building, which has serious structural issues. Bricks falling from it have concerned the owner of the building to the north of A Splash of Life; she leases the space to a day-care center.

“This building is over 100 years old,” Hunter says. “It’s had dozens of lives. It has been a stable, a furniture repair shop, a restaurant. But it’s a monumental project.”

Drummond disagrees: “It’s structurally sound. It does need a lot of work. If a conventional developer purchased the building, it would be torn down for the value of the land underneath the structure. But this is not a development project. Jerry is committed to making it a public-use facility. That’s why I’m advocating for him.”

Crowell needs more than one advocate and probably much more than the $80,000 he’s already spent. (“I’m in a lot of debt,” he says.) He says he’s committed to his project.

“See that area over there?” Crowell says, pointing to a hole in the floorboards. “That’s where the stage will be. Local musicians will have a place to perform here. We might do drag shows, too. Back there will be the catering kitchen. The hood is still there from when this was a restaurant. We’ll have a community garden in the back.”

“Jackson County wants to demolish my building,” Crowell says. “But I survived cancer. I’m going to survive this.”