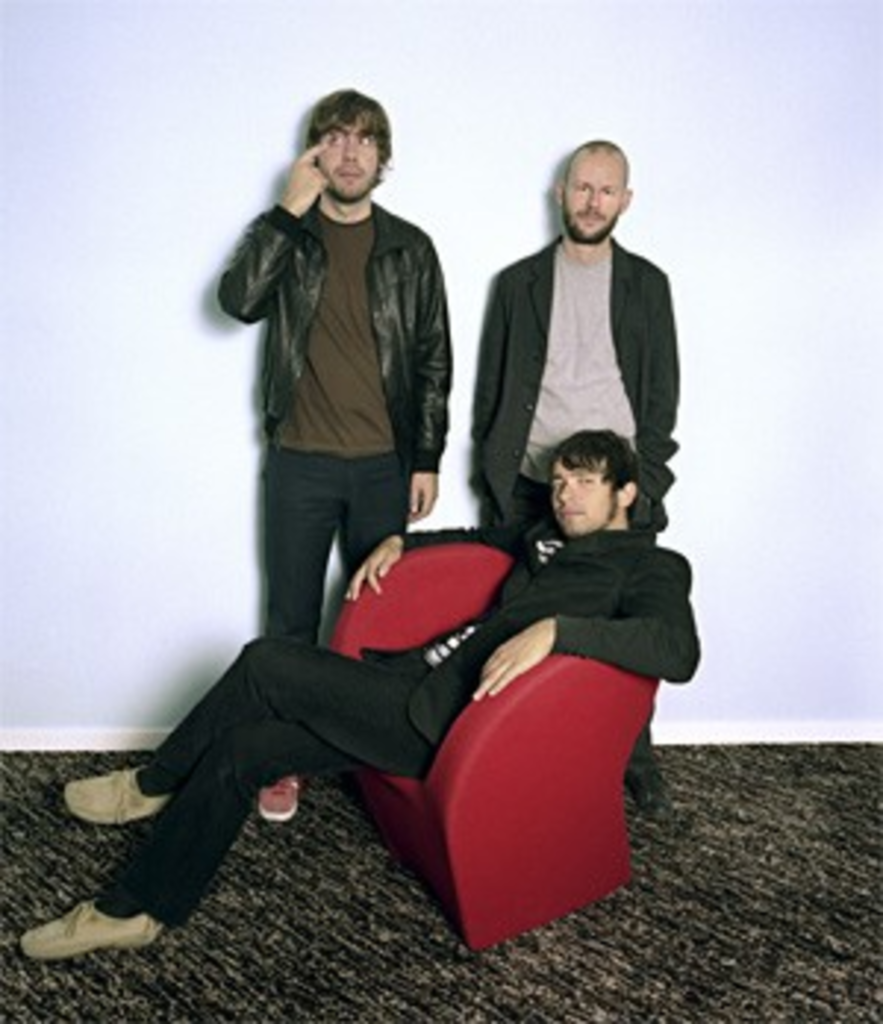 Flip to the entry for Sweden in the encyclopedia, and the description sounds almost utopian: phenomenal public schools, impossibly low crime rates and a universal health-care system that could silence Michael Moore. At first listen, the music of Peter, Björn and John, the country’s freshly minted indie-rock poster boys, appears to reflect this idyllic existence. It’s bubblegum pop that could pass as latter-day Beach Boys. Foot-tapping percussion and jangly, hum-along guitar melodies are accented by maracas, bongos and whistling. But a closer listen reveals that these sugar-sweet arrangements coat mournful, introspective lyrics of love and regret.

Take “Young Folks,” the single from the group’s modestly titled latest release, Writer’s Block. The song hints at skeletons in the closet: If I told you things I did before/Told you how I used to be/Would you go along with someone like me? The question is starkly at odds with the song’s blithe whistle and maraca-laden hook. The answer, sung as a duet with Victoria Bergsman, former frontwoman of fellow Swedish pop stars the Concretes, is an affirmation: I would go along with someone like you/It doesn’t matter what you did before. But for being a song about falling in love again, “Young Folks” remains haunted by self-doubt. Peter Morén, the group’s primary singer and prodigious whistler, later sings, Usually, when things have gone this far, people tend to disappear, his reservations juxtaposed with a lighthearted bongo backbeat.

Björn Yttling, the band’s bassist and keyboardist, says by phone from an indie-rock festival in Gurten, Switzerland, that the lyrical dichotomy is no coincidence. “You don’t want to go only dark or only happy,” he says, his voice harboring a slight accent that all but disappears when he sings. “If you have gloomy lyrics, you maybe want to have some happy-trappy music to pep it up a bit. I think that’s in every song we do.”

The trio displays a talent for writing lyrics that are both bleak and hopeful. “Objects of My Affection,” for example, broods, Some days, I just lie around and hardly exist/And can’t tell apart what I’m eating from my hand or my wrist, but then concludes, Was I more alive then than I am now?/I happily have to disagree/I laugh more often now, I cry more often now/I am more me. This plays out over a guitar-drum-and-bass crescendo that is equal parts Morrissey and Clap Your Hands Say Yeah.

To achieve this sound, Yttling, who was also the producer for Writer’s Block, describes a recording proc­ess as counterintuitive as the songs themselves. By combining individual sounds that Yttling refers to as “dirty” or “bad,” the group produces songs that, taken as a whole, sound spotless. “I want to include the rough parts, oddly, because it’s very easy to record clean sounds nowadays,” he says. “When I hear a song on the radio where they have just recorded like it should be, very clean, Ijust turn it off. On ‘Young Folks’ for example, almost everything is run through a string reverb.”

The seeds for PB&J’s pop aesthetic were sewn in the mid-’90s, when twee-leaning pop bands such as Roxette, Eggstone and the Cardigans emerged and were struggling to find their identity in the wake of an Ace of Base-driven dance-pop craze. In addition to opening the door to U.S. commercial success with its hit “Lovefool,” the Cardigans and a few contemporaries inspired a new generation of pop acts, PB&J included.

The current lineup of Peter, Björn and John didn’t coalesce until the former two — who had been playing together in various bands for eight years — moved to Stockholm in 1999 and met drummer John Eriksson. After a self-titled release in 2002, the trio began receiving critical acclaim for its second album, 2005’s Falling Out, which contained postpunk songs with the usual dark-sound-plus-dark-lyrics equation.

The success of 2006’s Writer’s Block coincided with the group members’ decision to share lead vocal duties and embark on extensive tours. The latter has helped the band earn a reputation for live performances that transcend its recorded material. Many of the songs are treated with new arrangements, such as Yttling ‘s signature number, “Amsterdam,” which is stripped down to rumbling bass and snare drum, Morén’s whistling, Yttling’s baritone and a pair of maracas.

“You don’t want to just hear a copy of the album when you go to a live show,” Yttling says. “We try to use a bit more improvisation. We’ve played together for eight years, we know each other, so at the spur of the moment we can come up with stuff.”

He also explains how the band’s shift to more accessible song structures on Writer’s Block aided its rise in popularity. “We play in a more consequential way now,” he says. “We don’t fool around with the basic pattern or structure like we used to. This record, we tried to do more like Devo, more of a pattern of a hip-hop, dancey feel to everything. We didn’t want any surprises in the last part of a song. It makes the song stronger in a way, you get the overall feel, and you never lose that.”