Patio six-pack: a half-dozen drinks to ring in your outdoor booze season 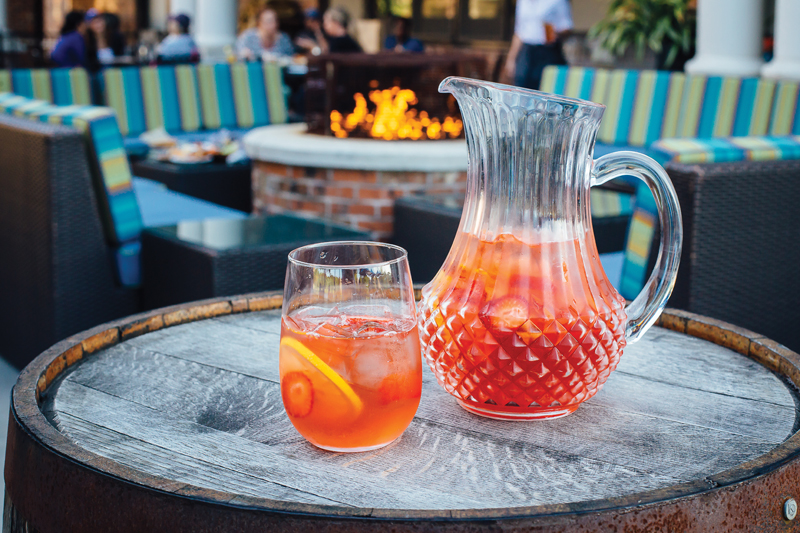 Dismiss this address as suburban and you’ll miss out on a fine view: tree-shaded grass and a large pond. Rye’s patio view is, in fact, more scenic than what you’ll find at most outdoor spots around town. Enlist a friend for a sunny afternoon and relax in one of the space’s comfortable loungers or under a large umbrella, then ask for a pitch- er of bar manager Van Zerr’s rosé sangria, which rejoins Rye’s drink menu this month. The deceptively strong porch-pounder is a blend of rosé wine, Union Horse white whis- key, Lillet Rose (a wine-based aperitif) and Dolin Blanc vermouth, with the bartender’s selection of fresh fruit. You might need a ride home after, but it’s worth it. 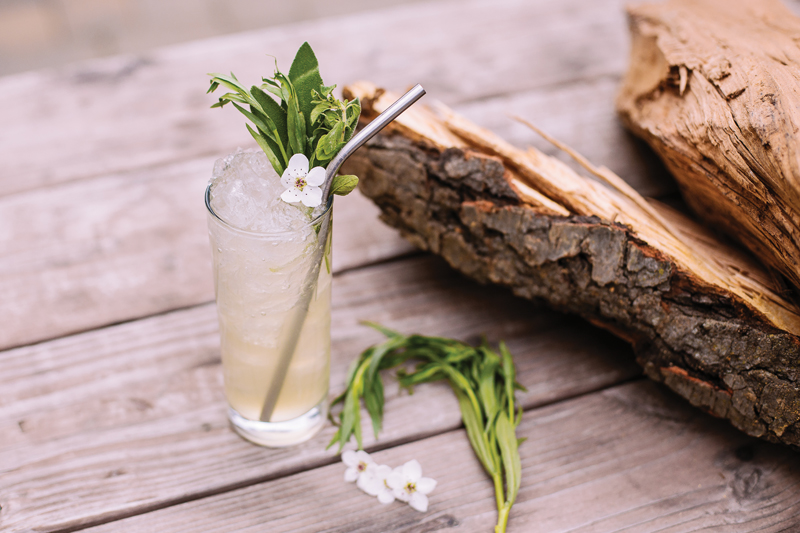 In the three years since Vaughn Good, the owner and chef of Hank Charcute- rie, opened his consistently impressive restaurant, he hasn’t stopped refining his approach. Last year, he took down his butcher counter, in favor of more dining space indoors; he also has built out a love- ly, torch- and string light–lit patio nestled between his restaurant and the shop next door. Head bartender Adam Chase creates the restaurant’s seasonal custom cocktails, which this spring include Chase’s Herbal Press: Rieger gin, a house-made lemon- lime shrub, soda water and fresh herbs. The drink is ideal for spring and goes well with Good’s rich, meaty dishes. 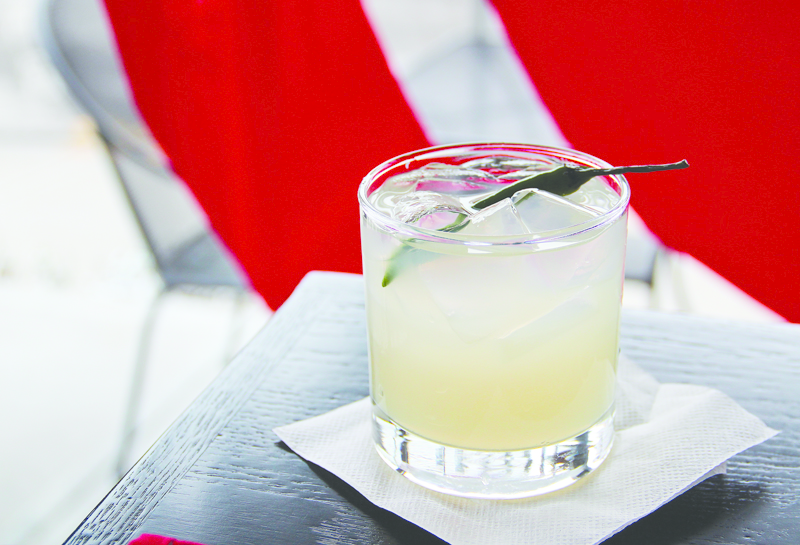 The frenetic intersection of 75th Street and Wornall Road has gained a dining com- plement with this restaurant, which busily turns out ramen, bao buns and cocktails as ’80s and ’90s music videos blaze from its many video monitors. And in good weather, Boru’s sliding glass garage doors — which connect wraparound patio seating to the indoor space along the restaurant’s entire south wall — give you another kind of bus- tling entertainment, allowing you to revel in Waldo’s street scenes. A great time to feel the breeze and the bustle is happy hour (3-6 p.m.), when signature cocktails are $5. Se- lections include a crisp take on the French 75, renamed the Samurai 75, which features gin, sparkling wine, jasmine syrup and lemon; and the Big Trouble in Little Waldo, a blend of vodka, Calpico lychee soda and matcha green tea syrup. 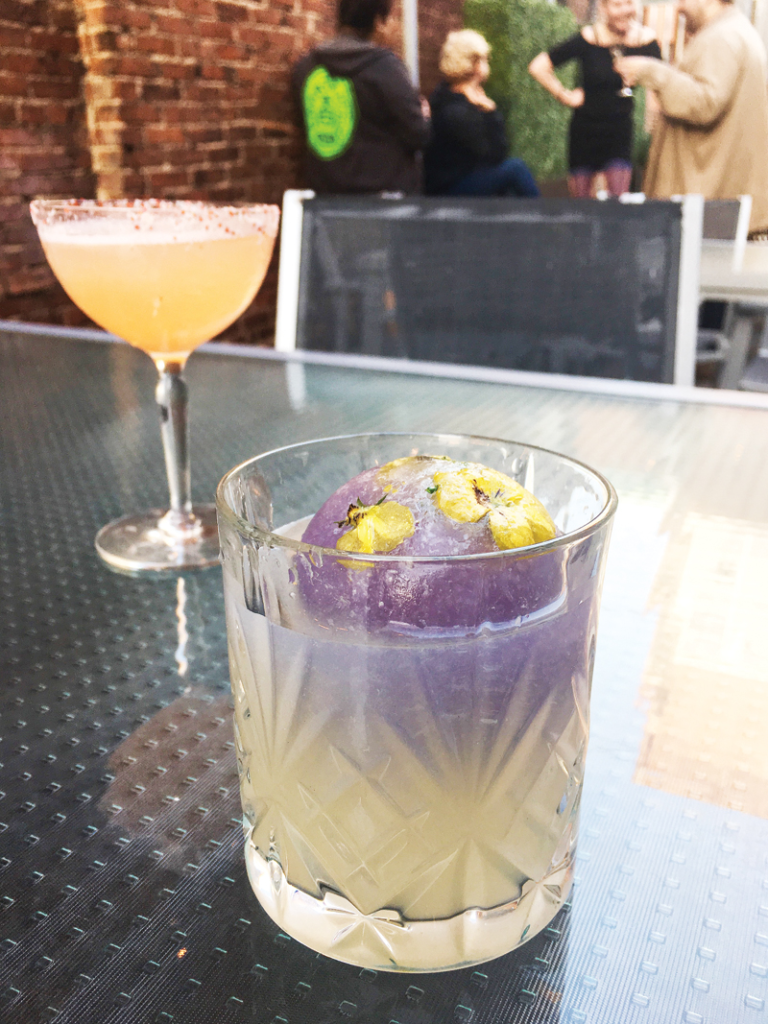 The 30-seat patio behind SoT is sort of an urban dream, an oasis between tall brick buildings adorned with string lights and vertical greenery. It’s a sophisticated and charming space, and owner Ron Berg knows it: He has invested in some stylish new outdoor furniture, just in time for warmer weather. The real stars at SoT are still the cocktails, though, and for spring, bartenders Rebecca Freeman (formerly of the American) and Margot Thompson (formerly of the Farmhouse) are working up new drinks. So far, the menu includes a bright and tart Paloma, made with white tequila, rose-and-cardamom syrup and lime juice, topped with Aperol foam. Also featured is an almost-too-beautiful- to-drink cocktail named Botanic Ritual, which centers on Uncle Val’s Botanical Gin and lychee puree and co-stars a fro- zen sphere of Rothman and Winter crème de violette, Kuebler absinthe, orange bit- ters and edible flowers. As the sphere melts, the drink’s flavors subtly change and deepen. 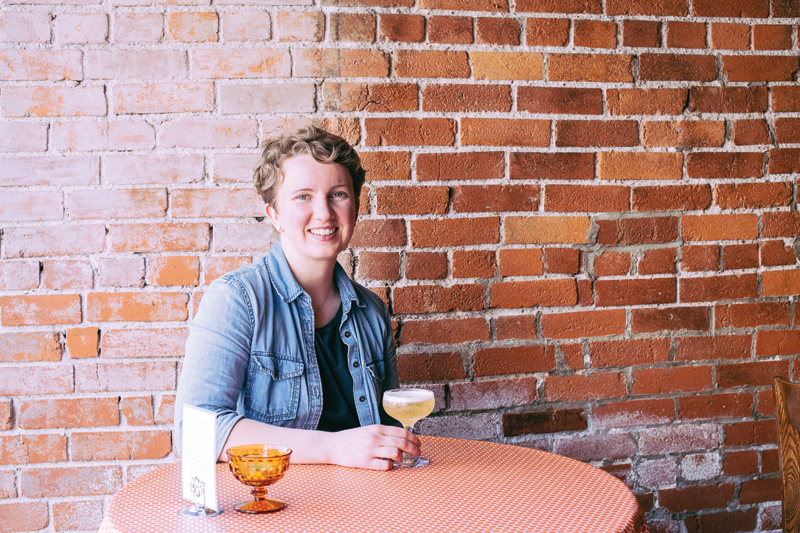 Among the subtle changes that Aep owner and executive chef Jakob Polaco has made to his new restaurant is an update to a neighborhood hidden gem: the rooftop pa- tio that once belonged to Thomas and still offers a hypnotic view of 39th Street and the surrounding Volker neighborhood. New furniture and fencing perk up the space, which starts table service this month for the first time since Polaco opened Aep last fall. Also fresh here: bar manager Laura Wagner, who has been busy crafting her first cock- tail menu for Aep. Among her creations is the Thai Tea Milk Punch, a blend of strongly brewed Thai tea (black tea flavored with star anise, tamarind and cardamom), Right gin, turmeric, lime and clarified milk. According to Wagner, the clarification process removes the solids from the milk and, when blended with the tea, reduces the astringency to lend the drink a silken texture. Sounds just right for drinking outside, up high. 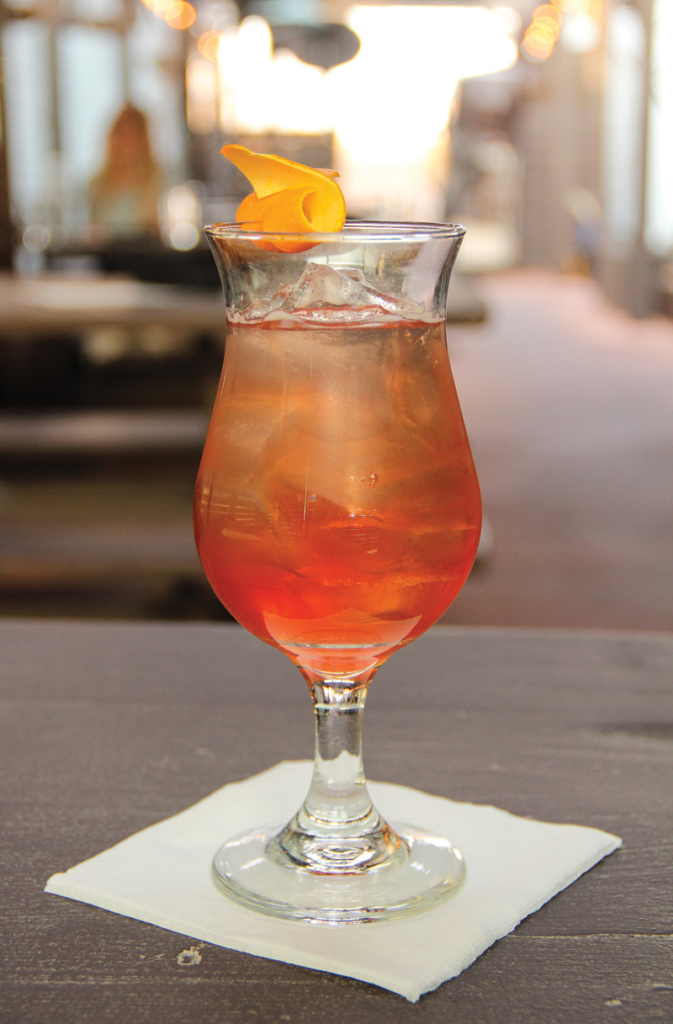 Bar manager Zac Snyder has spent the past two years building a cocktail program at Westside Local, one he’ll tell you “thrives on fun, delicious, approachable drinks.” For spring, he asked his bartenders to collabo- rate on a menu of reimagined classics, and among the new offerings is the Westside martini, which riffs on the South Side by replacing the gin with tequila and the mint with cilantro. (A lime here is still a lime.) Snyder has also cleverly interpreted the ’70s drink known as the Slow Comfortable Screw Against the Wall. The original uti- lizes vodka, sloe gin, Southern Comfort, or- ange juice and Galliano; Snyder’s combines Rieger whiskey, apricot liqueur, absinthe and a house-made orange-lime cordial. It is mildly sweet and citrusy, and it is danger- ously easy to drink — ideal for an afternoon in Westside Local’s cozy, welcoming beer garden.