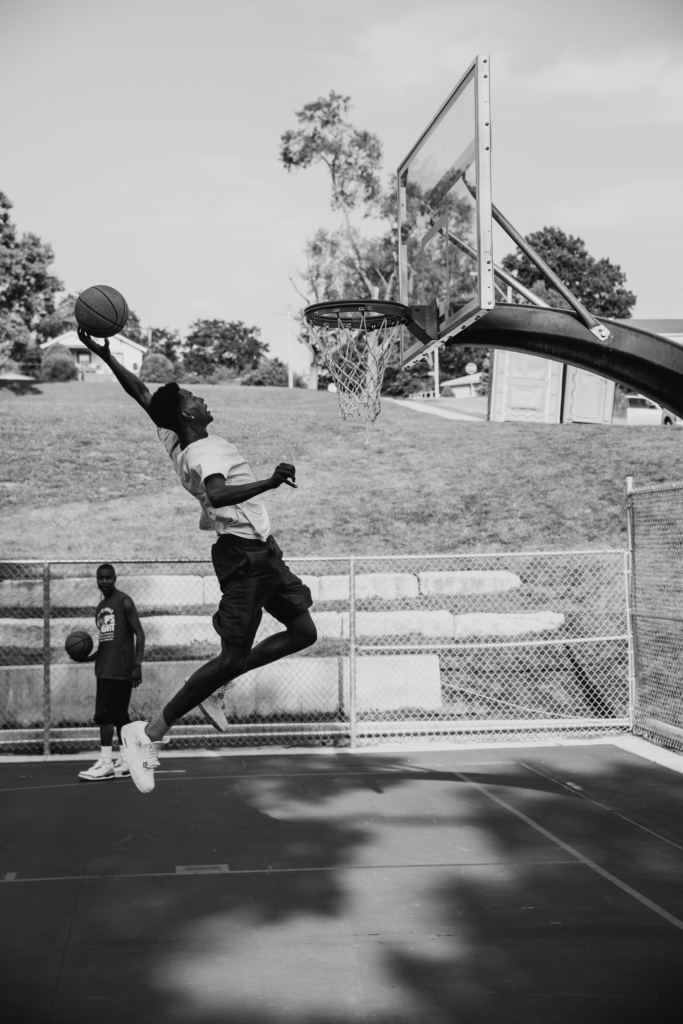 Running the green-painted asphalt, Mick Spearman is alone, but not for long. Defenders are catching up behind him. 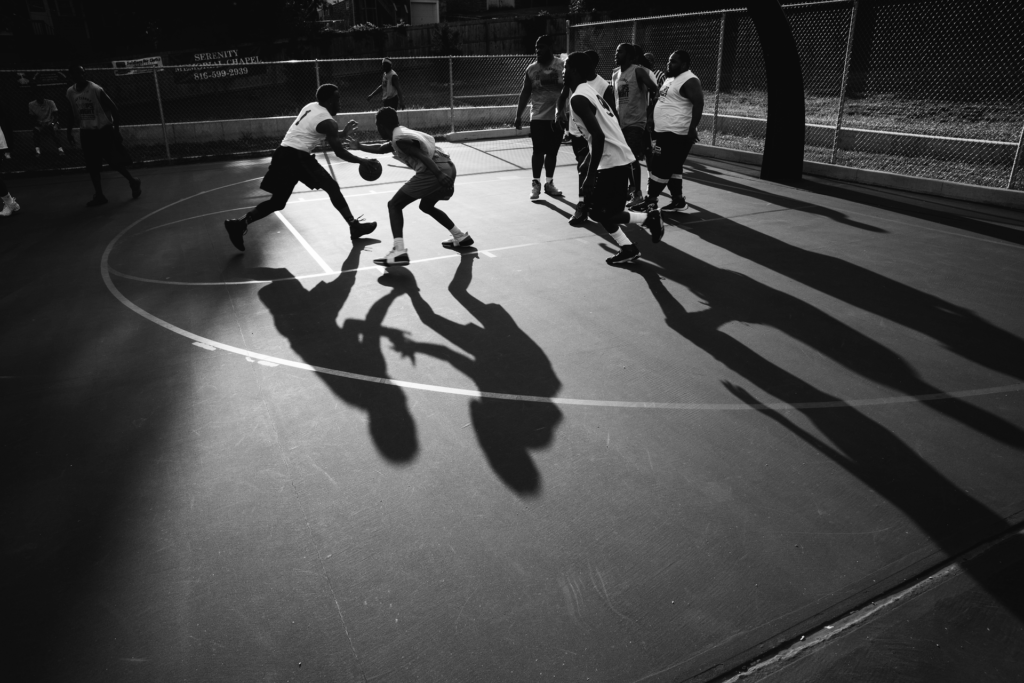 Hoops at Night in Oak Park is for young people who live nearby, though others drive in from surrounding neighborhoods. Games are fast, and the play — layups like Spearman’s — is often impressive. Energy gets burned and trash gets talked. Better here than outside the fence. Hoops organizer Pat Clarke coined the league’s motto, printed on team jerseys: “Welcome to the Pat Clarke Park, where we keep kids on the court, out of court and off the streets!”

The park is east of Prospect at 44th Street and South Benton, in the heart of the 64130 zip code made notorious by The Kansas City Star’s “Murder Factory” series a few years ago, tracking the homicide rate. It’s still a tough place to live. Zoom in to look for recent crimes logged in an online database and you see the message “Too many incidents to plot.”

But the hoops program, in its third year, has become a bright spot. 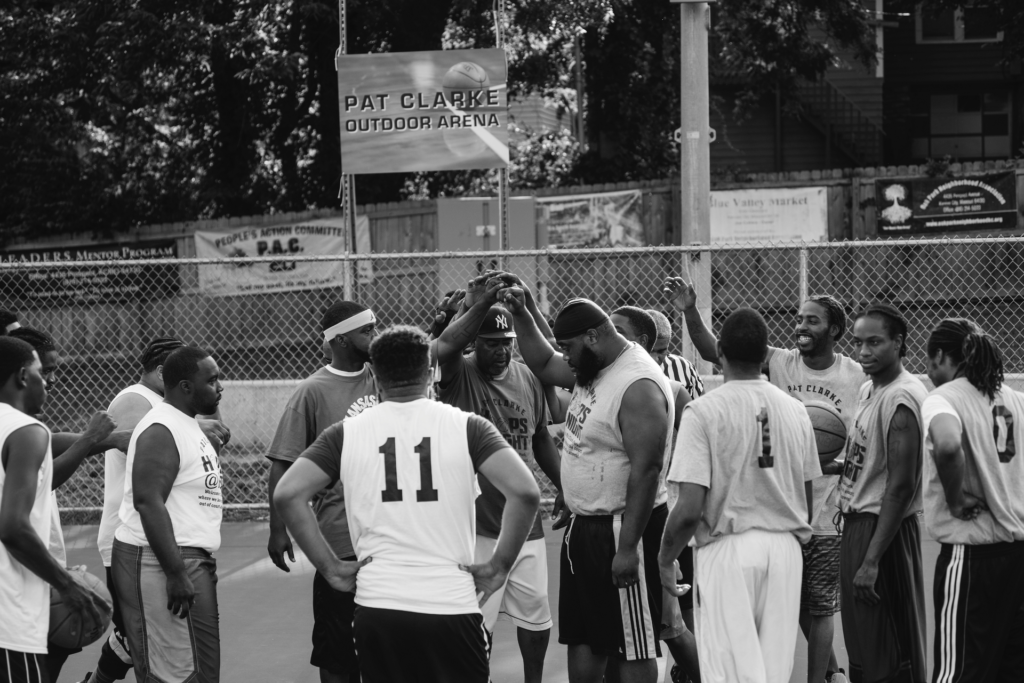 “What Pat Clarke and the neighborhood are doing is very positive,” says Sgt. Kari Thompson of the Kansas City Police Department.

Clarke, director of the Oak Park Neighborhood Association, lives just yards from the park, where players 14 and older hone their skills. “If they don’t have family, then we make them feel like they belong,” he says of the young people. “Basketball is something where you can also teach them about life — when to shoot or when to pass. If they pass on bad opportunities, then they have a chance of living past that. Some of the shooters on the street shoot basketballs on that court. We need to stop burying kids. That what I hope we do.” 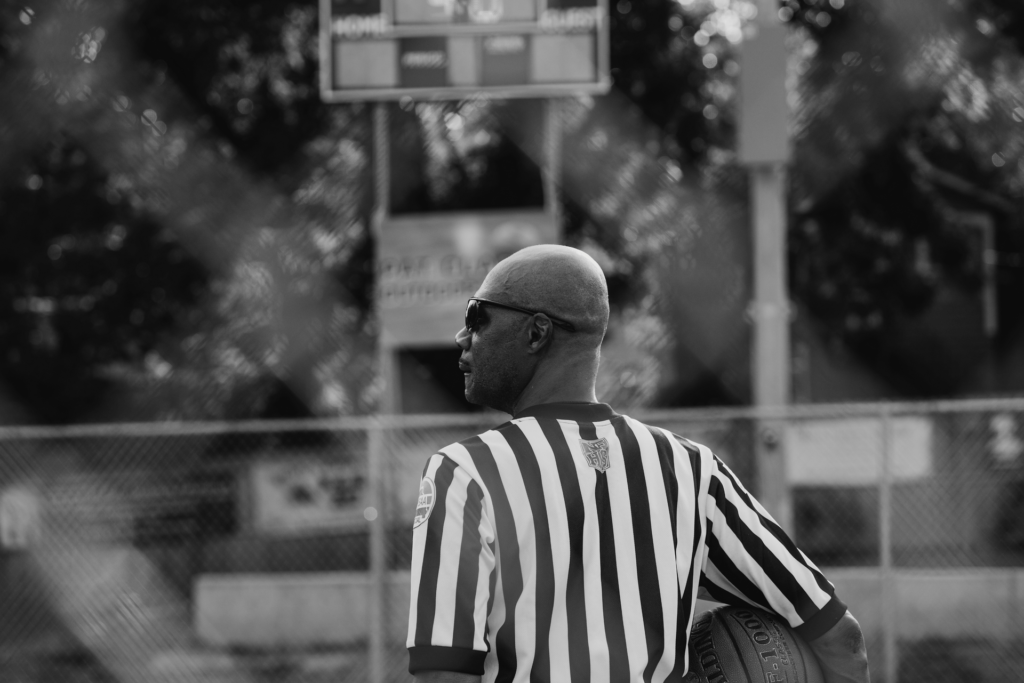 Before play begins on a recent Wednesday, Michael Brown sits on a concrete step set in a grassy hill facing the court. He’s here to officiate, but he remembers playing in the park with his cousins. He helps with youth sports around the metro, and he considers this a tough assignment. Some nights, the guys get frustrated with his whistle. But his presence brings consistency to street ball.

“You have to let them know you are here for a reason, and they have to adjust [to the calls],” he says as he changes into his stripes. “It’s life teaching, too. You learn you’ve got consequences for your actions. You can get a technical foul. You can get kicked out. They have to talk to me in a civil way.” 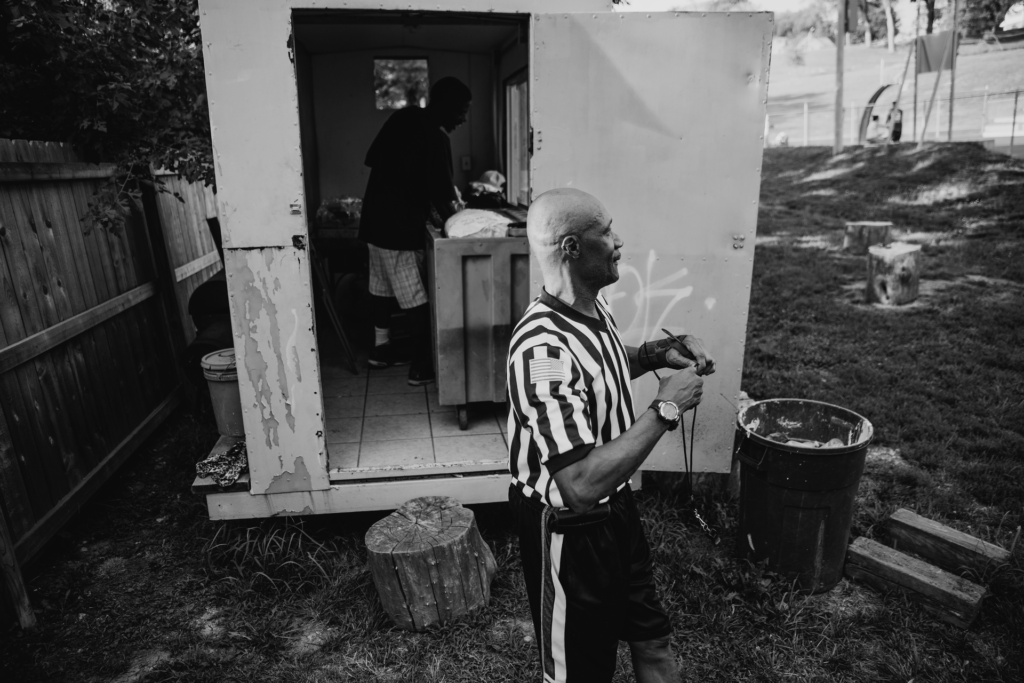 Also here tonight is Sgt. Darrel Rocker, who is off-duty, and who requested the job. “It’s important to do my part,” he says. “We all have a role in making the city a better place.”

The players who get here, he adds, benefit from a casual interaction with a cop. 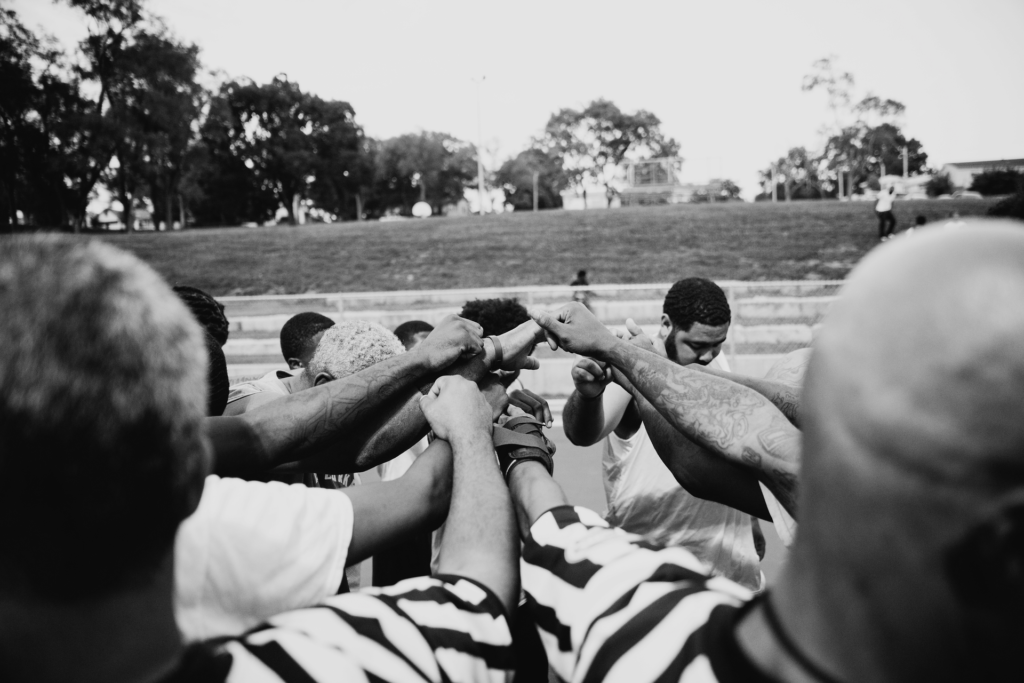 Clarke, who contracts with the department as an outreach specialist, agrees. He says he’s often called to crime scenes where witnesses talk to him but don’t want to talk to the police. “I tell them that every police officer is not bad,” he says. “Look, I’ve been pulled over. I’ve been slammed against my car. I was living that life. But you’ve got to see both sides of it. I tell kids to pay attention and look what’s beyond basketball. I say, ‘Come to my office and I will help you find work.’ The street calls some of these kids.” The games, he says, let the kids hang in the neighborhood without succumbing to that call. 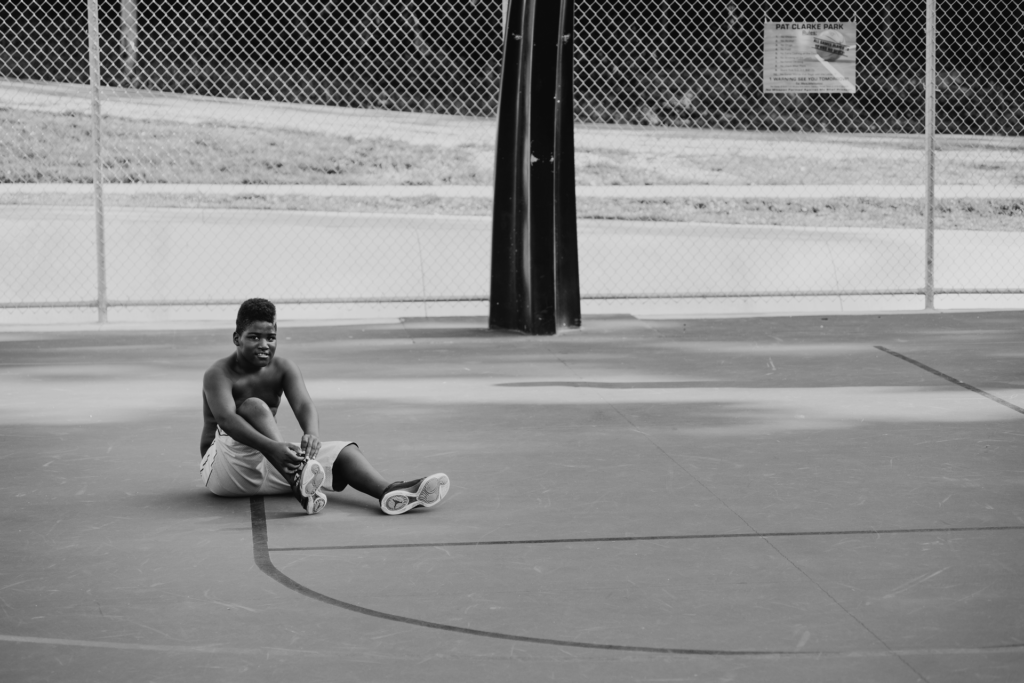 Clarke grew up in a two-parent household, and his mother and father both worked. He credits them with instilling in him the discipline to pursue his dream of playing baseball; at age 6, he was competing in blue jeans and wool jerseys. “Kansas City was full of talent in baseball, black and white, and we took sports seriously,” he recalls. “My ball was my doll, and my glove was my pillow at night.”

He goes on: “My mom taught me how to play baseball in that park. She taught me how to pitch and how to bat left-handed. I remember one time she was getting mad at me. She said, ‘Throw the damn ball, boy. Throw it hard.’ I didn’t want to hurt her. But she marched up to me and smacked me and said to throw the ball harder. I threw it as hard as I could, and she caught it. She was preparing me for now. I had to be the best. She told me, ‘I didn’t want you to be a punk.’ ” 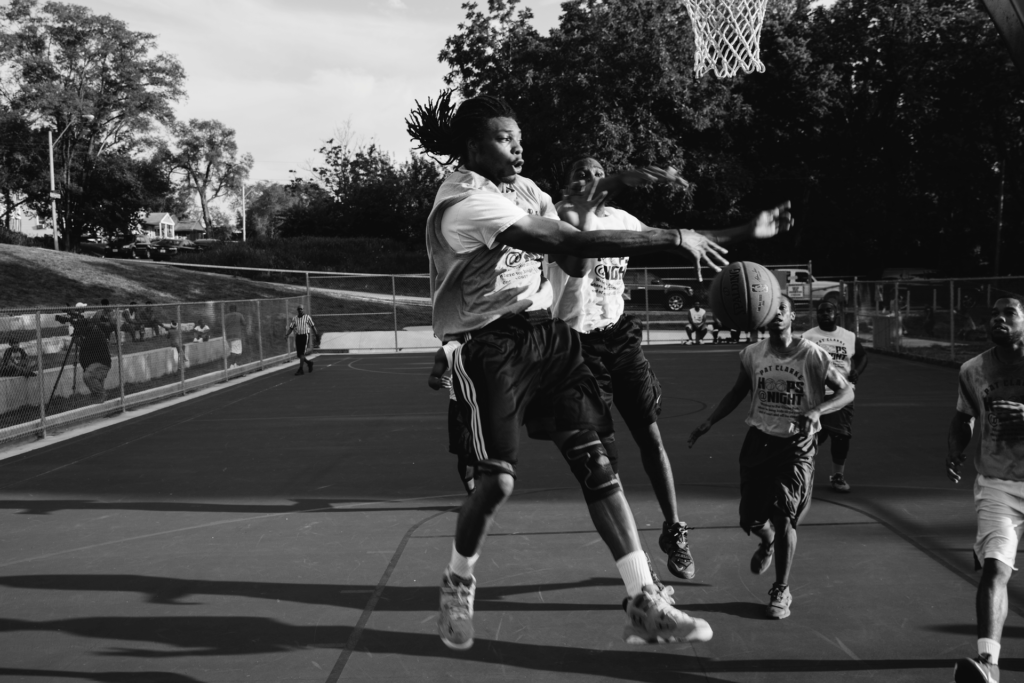 Talking with his friend Rodney McGautha a few years back, Clarke called on his nostalgia for that time in his life. “I said, ‘Man, you know what we should do? We should get the baseball diamond going.’ ’’ Out of that came the basketball idea — an idea that Clarke didn’t think would fly with city officials “They said, ‘Yeah, whatever you want to do,’ ” he says. “I went home and drew everything up. I said, ‘Good. I want to put a court right down there. I want it closer to my house so I can keep an eye on it.’ ”

The plan included a walking trail and a new playground. He wanted shatterproof backboards and breakaway rims to withstand the dunks. He insisted the court be hunter green rather than black so the surface would be cooler. 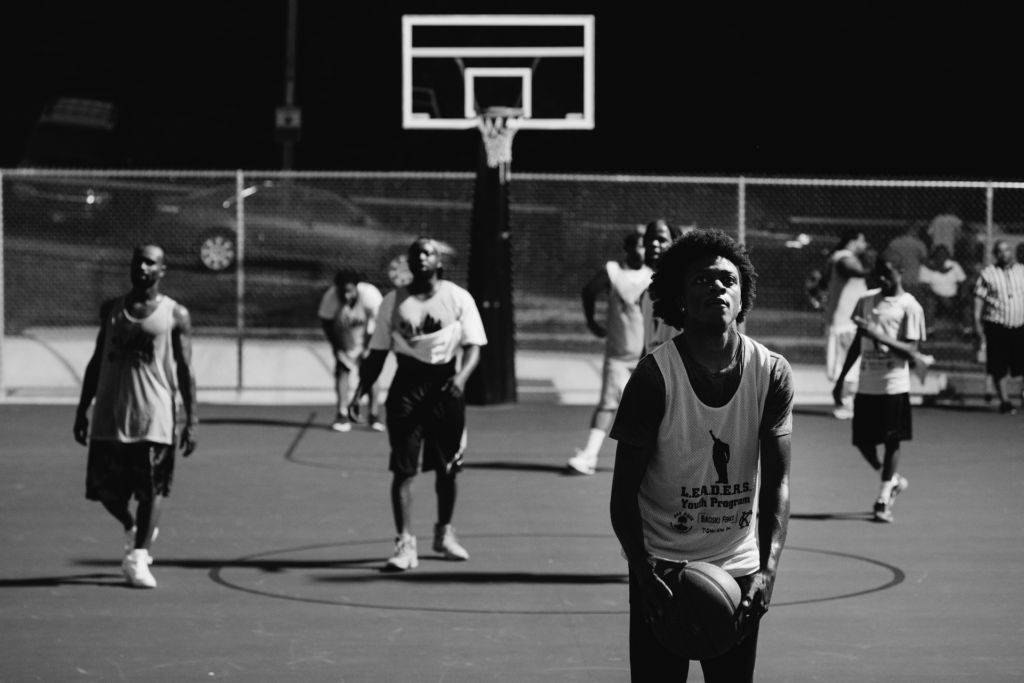 From the spring of 2011 through the fall of October 2016, Kansas City has spent about $678,000 on Oak Park Projects, including the baseball field and the basketball court, according to city records. The money came from Public Improvements Advisory Committee (PIAC) funds.

“It was a neighborhood park that was probably underutilized, and if you put positive activity it drives out unwanted activity,” says Terry Rynard of KC’s parks department. “The court is wildly popular.”

DaNearle Clarke, Pat’s son, attends games when he isn’t working at Serenity Memorial Chapel, a job he took because he’d lost friends at an early age. “In this neighborhood a lot of guys had talent, but they were murdered,” he says. “That’s street life, but it’s not for me.”

Clarke’s nephew, Monty Taylor, serves as president of the basketball league’s board. “Even when I’m not playing, I can take my kids and family and go down there and watch other games to just support other people,” Taylor says. “We just need to take down some of the murder rates so we can grow as a community rather than die as a community.” 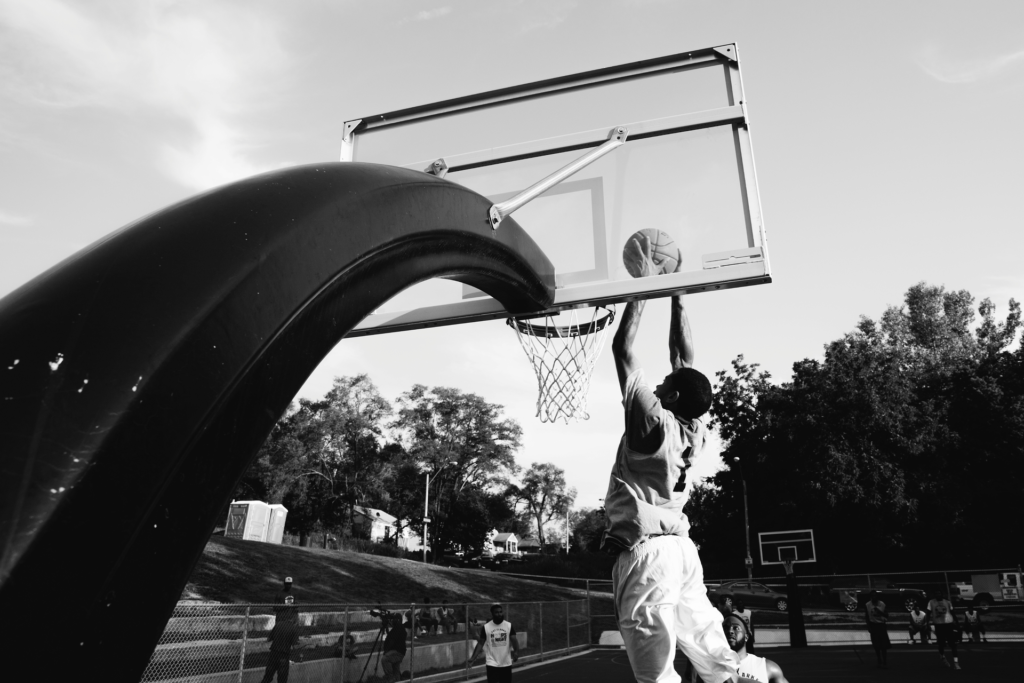 Spearman pushes the ball down the court and then hustles back after the shot. His teammates down low miss a rebound.

“Get some boards,” he yells and pedals backward. “Play some D.”

The game is becoming a bit more physical when the whistle halts play. One of Spearman’s teammates questions a call: “Man, that dude is trippin’!”

Spearman played at Central High School and knows the neighborhood. The league, he says, “brings the community together to build better relationships.” He adds, “There’s a lot of attitude that comes out. There’s an opportunity to get the aggression out. It helps to relieve stress and is a form of exercise and you are surrounded by friends so you can still kick it and feel safe.”

Ralonda Brown coaches a 15-and-under team that’s setting up to play next. Most are immigrants and Muslim and live in the Historic Northeast. 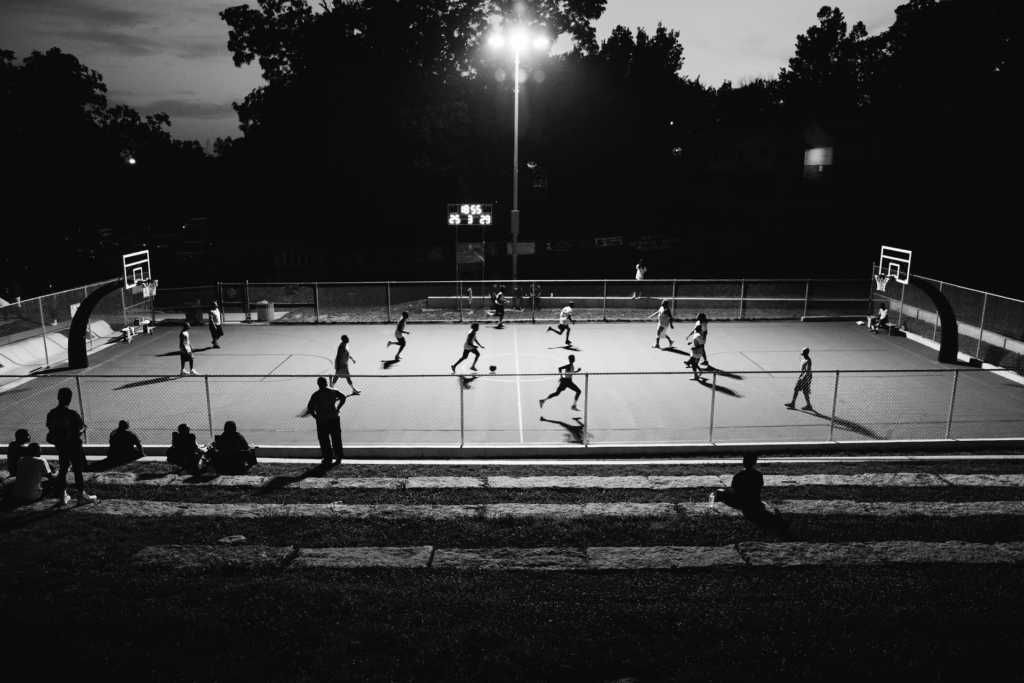