Partner discuss their new riff-heavy album Never Give Up 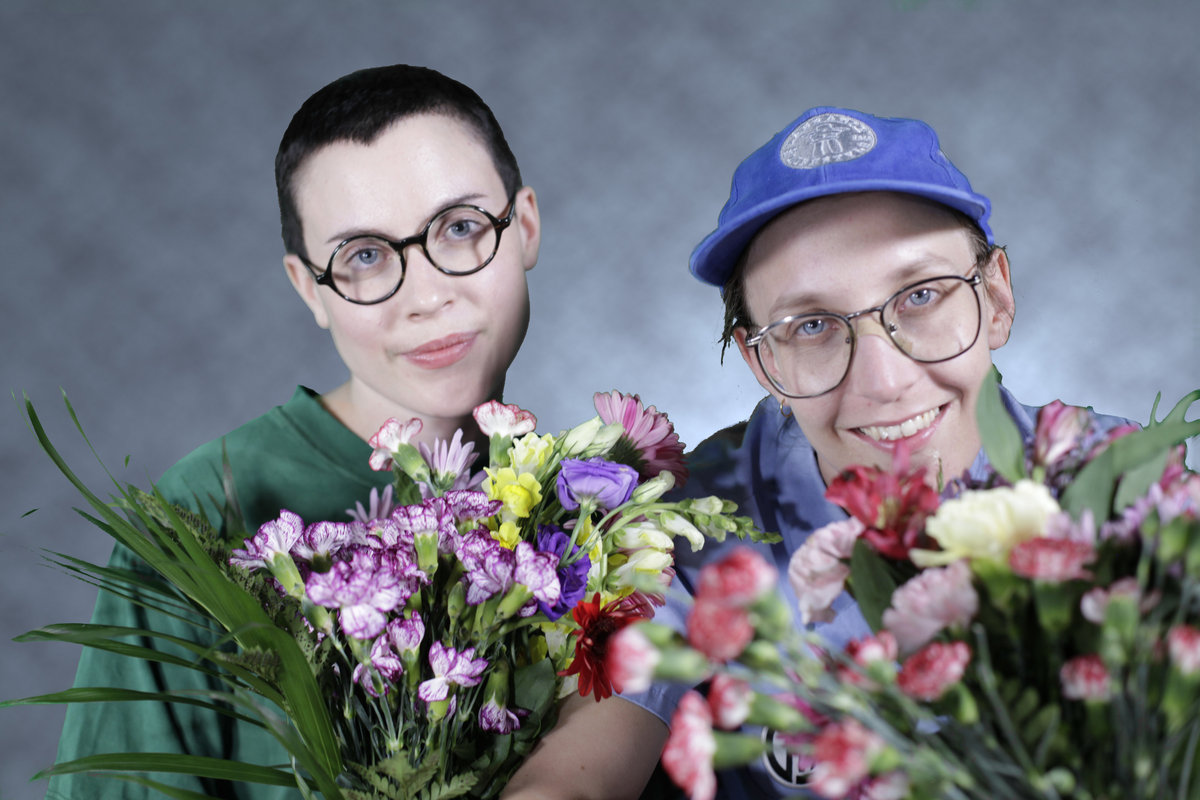 For those who came to Canadian band Partner after the viral success of 2017’s “Everybody Knows” off In Search of Lost Time, the initial hard rock riffage which kicks off their latest, Never Give Up, might be a bit of a shock. The ’90s indie-rock sound has shifted to a classic rock homage, but the band’s new album still contains the clever lyrical content and absurdly catchy hooks for which Partner is known. Opening cut “Hello and Welcome” is the update to Cheap Trick’s “Hello There” you didn’t know you needed; there’s “Rock Is My Rock,” a song about rock ‘n’ roll being a lifesaver; and even “Big Gay Hands,” an AC/DC-style blues which flips the gender and sexuality of every sleazy lyric heretofore recorded.

Needless to say, I’ve been playing it nearly every single day since it first hit my inbox, so it was an absolute delight to hop on Zoom with Partner’s singer and guitarist Josée Caron and bassist and singer Lucy Niles at the end of October to talk all things Never Give Up.

The Pitch: I know that you all had some difficulty putting the album together, but it doesn’t sound like it, I guess is the best way I can put it. What were some of those issues in recording that?

Josée Caron: We really knew what we wanted to say. It was just a matter of getting every single element to work together to form a coherent whole. And we learned a lot along the way about how to do that. It was definitely worthwhile.

What were some of the things that you learned? The songs on this album sound very cohesive like they’re all coming from a place of enthusiasm.

Josée Caron: Yeah, totally. I think we learned to have a more disciplined approach and we learned how to get excited about all our material. We wanted to have all stuff that we were excited about. It was a matter of figuring out how to do that, but then once we did like, it’s like a positive feedback loop. You find something you love and if you love it, you can keep going and be entertained and be propelled. We decided to just let our hearts lead the way. And yeah, that’s how it sounds.

There are songs on this album that are simply about the joy of rocking, like “Rock Is My Rock,” “Hello and Welcome,” and “Honey.” Were those born out of writing about the things you enjoy because, having seen you live in the past, it seems like playing rock music is a joy for you both?

Josée Caron: Yeah, it definitely is. And I think that’s exactly what happened. If it brings us joy, it kept kind of coming up, so the songs are also about the people that love to rock. It brings us so much joy–and the people that it brings into our world are so special. We wanted to write about that.

Who is the guy that you “met in Cleveland and his brother, too” that you write about in “Rock Is My Rock”?

Josée Caron: I can’t remember his name exactly, but he was this really enthusiastic and nice guy, and he had said that we had the fifth-best rock song. He’d seen us three times in the last three years and his brother was there with him, supporting, coming to our show in Cleveland.

Josée Caron: We were moved.

“Hello and Welcome” joins this cadre of songs that are very small in that you now have a song where don’t have to worry about what song you start your sets with from this point on. It’s like Cheap Trick’s “Hello There.”

Josée Caron: The funny thing is that we’ve actually done that before a few times, where we created songs you would have to start out with. It’s always exciting and it really sets the tone and the tone that this one’s been sending so far has been really fun.

It’s kind of sad and funny that the song goes, “So glad you made it out to the show.” When I first heard it, I was like, “Oh, I want to go to a show.”

Josée Caron: Totally. We like wrote that before COVID-19, but when we were thinking about it, when the COVID-19 happened, it was like, “Shit.” Very relatable, I guess, because you don’t have to leave your house to go.

Lucy Niles: We recorded that last summer, then it came true. It rings true, now.

The video for “Honey” just came out last week. Who’s idea was it to make a Wayne’s World-style music video?

Josée Caron: There’s a director who we work with very frequently. Her name is Leslie Marshall, and that was her idea. She said before we set out to make the video that she’s been dreaming of making this video for years. I think the song was just the perfect occasion for her to get all of that out there. I think the result is highly entertaining, if I do say so.

You’re 100% correct. There’s a bee costume involved that is not a Blind Melon nod, which I really do appreciate. The song obviously is about a very particular guitar. What is the six-string about which you’re talking in “Honey”?

Josée Caron: The song tells the origin story of that guitar basically. My dad, who’s the original rock fan in my life and a huge influence on me, bought me it without asking or consulting with me at all. He mailed it–sent it on a bus to my house–and I’m like, “Oh my gosh, dad bought me a guitar.” I opened it up and there was a note from him in it that said, “This guitar, I had to get it for you because it plays like honey going down.” I just never forgot that. Then we named the guitar “Honey,” based on that because the color is gold. It’s Les Paul gold top 2016. That’s basically the whole story I’ve been playing it ever since it kind of popped up into my life, like a meant to be kind of thing.

The album is just loaded with all kinds of riffs. What led to the embrace of this? It seems like it’s a whole-hearted embrace of the ’70s–there’s definitely some AC/DC in there–but what was that born out of?

Josée Caron: When we were kids, our dads were huge influences on what we listened to and what kind of guitar we played. I know for me, personally, all of that stuff–the AC/DC, especially–it’s the original jam or whatever. My dad would always be within six feet of me saying something like, “Malcolm Young is the best rhythm guitar player of all time,” and stuff like that, I think that that’s the music that we learned to play and that we love to play and riffs–we find them so energizing and powerful that we find ourselves always turning back to the riffs. This was more just like our original style, really, than some of our other stuff is.

How is it more like your original style? What other stuff are you referring to–are you talking about what was on In Search of Lost Time?

Josée Caron: The name, Never Give Up, comes from pushing through all the processes of making the music that we had released and then getting to that point where we had to push even more and breakthrough to find ourselves again. That’s the sound of Never Give Up because making your first album, you don’t know. If you haven’t been through the process, there’s a huge learning curve and initiation to everything that it takes. After going through that and having to push ourselves even further, that’s where we ended up. That’s where we landed.

That makes a lot of sense because this album does seem as though there’s a reckoning of who you all are. “Good Place To Hide (At The Time)” was the first song that I heard of the album all the way back in March, and it seems very contemplative and definitely looking back, but not with a nostalgic eye.

Lucy Niles: Yeah. You get it for sure. Oftentimes, when people are talking about looking back, it’s through a very rosy lens or whatever. [Never Give Up] was just looking back and appreciating the present,

I love the fact that “Big Gay Hands” is on this because I feel like, while maybe you could contextually read into some Judas Priest songs in retrospect, there’s not a lot of gay rockers, where a song talks about hitting on a hottie. It’s all very heterosexual and this is not from that standard, cis-het perspective. It sounds like an AC/DC song, but it’s not misogynistic. It seems very sweet and silly at the same time.

Josée Caron: It’s about the one you’ll never forget and it’s really like, “Just remember the good times.”

Lucy Niles: Yeah, exactly. Totally. It’s definitely its own form of love song. It’s sort of like a polite long song. I was just like, “I’m not going to say too much detail as a gentleman.”

What’s it like, putting out a new album in the midst of the pandemic and all of that, since you can’t tour?

Josée Caron: We’re focusing on writing new material. Honestly, we haven’t stopped working. I think you’re going to see a lot more music from us next year, for sure.

Lucy Niles: Yeah. Look, we’re recording right now and we are writing lots of stuff, so that’s the plan for now: just keep writing and recording, since we can’t get out there and hit the road right now. We can definitely hit the road on our songwriting.

Never Give Up is out Friday, November 20. You can order the album on compact disc, vinyl LP, or digitally from Partner’s Bandcamp.