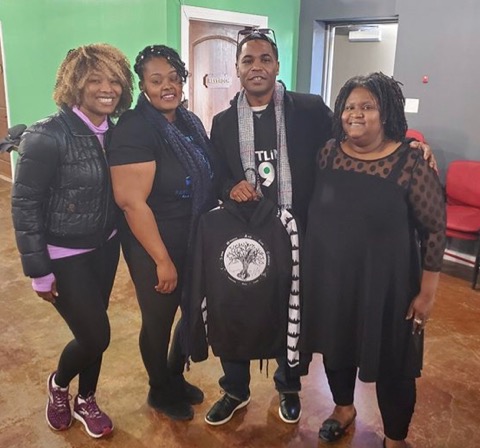 Those wandering into a KC coffee shop on a Saturday morning might expect to hear sleepy chatter about Netflix shows, brunch plans, or wild Friday nights—not an impassioned discussion about criminal justice, race, and violence.

Then again, it’s clear community organizers Justice Gatson and Tiara Moore aim to do something unexpected. The founders of the Reale Justice Community Defense Fund and Participatory Defense Team galvanized more than a dozen people Saturday at Equal Minded Cafe. Unifying the group became focused on a common, yet radical goal: Everyone can do something to fight injustice in the prison system.

Joining the team involves reading up on cases, communicating with attorneys, and appearing in court to show support. The central idea hinges on unburdening families and serving as a visible ally.

“Black Panthers did this, freedom fighters did this. They didn’t call it participatory defense. They just called it supporting each other,” Gatson, an ACLU organizer and self-proclaimed “social justice doula,” said. “It’s really important to have a network that protects those who are most marginalized.”

These marginalized communities include black, disabled, and LGBT+ people. According to 2017 statistics from the U.S. Bureau of Justice, there are four black people in jail for every one white person. One in every six transgender people will spend time in jail. Meanwhile, for black transgender people, this rate climbs to one in two. Data from the National Registry of Exonerations also shows that wrongful convictions surge among the black population.

This is a fact that Na’im Al-Amin knows too well and that motivates him to stay involved.

“I was wrongfully charged with conspiracy to distribute cocaine. I was in school at K-State earning three degrees and on track to go to law school,” Al-Amin recounted. “After being released five years later, I was homeless and sleeping outside.”

Al-Amin, now 40, has channeled this harrowing experience into his own life-changing nonprofit, SWAGG Inc. The organization teams up with the United States Postal Service and other employers to provide jobs, entrepreneurship training, and other reentry services to ex-prisoners.

Many wonder how Al-Amin manages to push past his own anger and help others. When faced with this question, his voice grows quiet and determined. “If they saw the number of black men I did who committed one crime and never came home, that might change their mind.”

Like Al-Amin, Moore believes in participatory defense because she sees her own experiences reflected in prisoners’ stories. Her record still carries a non-expugnable charge for attempted murder after she defended herself from an abusive partner at the age of 19. Unable to pay her $75,000 bail, she stayed in jail for 28 days. The worst part, Moore says, was being separated from her children. Last year, she and other activists spent Mother’s Day bailing black mothers out of jail, reuniting families like her own.

“When I was arrested, I didn’t know what a felony was, what a misdemeanor was, or what a trial was. I just wanted to go home to my kids,” Moore remembered. “Now, Participatory Defense is me reaching out to the mothers, and letting them know what’s happening with their babies.”