Parlor food hall: your guide to the Crossroads culinary playground 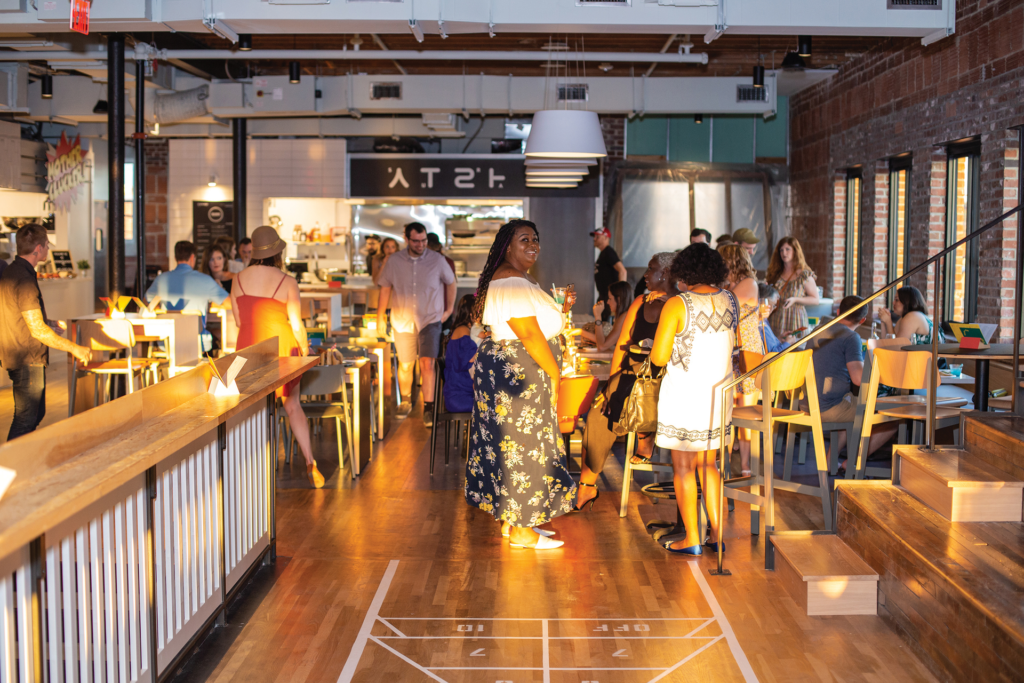 Nowhere does America’s dream of the “melting pot” seem more perfectly realized than the food court, where the sometimes competing, sometimes complementary aromas from a dozen fryers and flat-tops tangle in the air like a den of scent snakes.

Of course, Parlor — the three-story, seven-restaurant, 18,000 square foot playground in the East Crossroads — is a food hall, not a food court. Which is just to say: shit’s nice. You can take a date here.

Parlor is sleek. Parlor is sprawling. Parlor has been neatly parceled into cheery dining rooms and laidback living spaces by local architecture firm Hufft. It’s also extremely, er, hip. There’s a wall of bleacher seats overlooking a shuffleboard court that I have yet to witness anyone use. There’s a well-chosen but high-margin tap list (a short pour of Tank 7 is $8). There are graffiti-style murals from local artists. I am a debt-carrying member of the Millennial generation, and yet I have never been so tempted to mutter “youths” under my breath as when passing Parlor’s bathrooms, which are gendered with “SUP BRO” and “YASSSS GURL” in bold graphic type.

The building’s owner, RedWether Collaborative, has taken an “if you build it, they will come” approach to entrepreneurship. One- to three-year leases keep the commitment low and the concepts fresh; Parlor staff run the bar and POS system. The goal was to lower the barrier to entry for new chefs and create an environment where they could get down to cooking as soon as they got a set of keys.

A noble goal. But seven restaurants is a lot of ground for any one diner to cover. Although the menus are pared down, Parlor still offers an embarrassment of culinary riches. Here’s your insider’s guide to navigating this fancy food court. 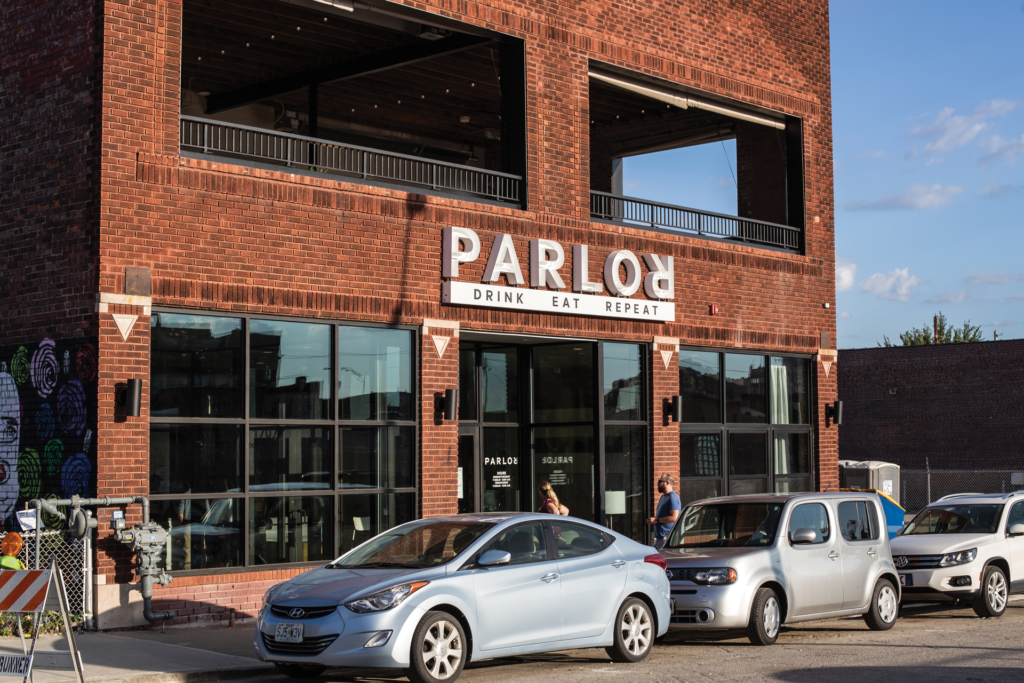 Yes, Kansas Citians have been carb-loading with Farm to Market’s bread for 25 years. But the company’s first-floor stall at Parlor is its first attempt to put something between the slices. Executive chef Max Watson’s menu has a sandwich for every palate, including one of Parlor’s better vegan options. The “oyster” po’ boy is a husky sesame roll stuffed with tempura-fried oyster mushrooms from Grand River Mushrooms and dappled with a soy and mirin dressing.

Carnivores, though, should order the house-made pastrami, which won me over with its sin-dark spice bark and chewy, bacon-like texture. Farm to Market trims it Reuben-style, with sauerkraut, Swiss cheese, and Thousand Island dressing. The sandwich isn’t fancy or flashy or built for the ‘gram. It’s just good. My only quibble: I wanted thicker slices of the (excellent) grilled rye bread.

When chef Patrick Curtis isn’t slinging some of the metro’s best ramen at Shio, in Midtown, he’s grilling Japanese kebabs and okonomiyaki at Yaki-Ya. The first-floor stall has a solid selection of grilled dishes, but don’t pass up the okonomiyaki. There’s something equal-parts comforting and stimulating about the savory Japanese dish, which tastes like the test-tube progeny of a pizza, an omelet, and a pancake.

Curtis offers both Hiroshima- and Osaka-style okonomiyaki, but my allegiance is to the latter, which is thicker and fluffier. The grill browns the bottom into a nutty disc, while the inside of the cabbage- and onion-stuffed pancake stays gooey and chewy. You can add meat, vegetables, or a fried egg for extra heft, but the built-in toppings are hearty enough. The Osaka-style ‘yaki comes zig-zagged with kewpie mayo and brown sauce and stippled with scallions, furikake, and katsuobushi — paper-thin slices of tuna that convulse hypnotically in the steam from the dish. 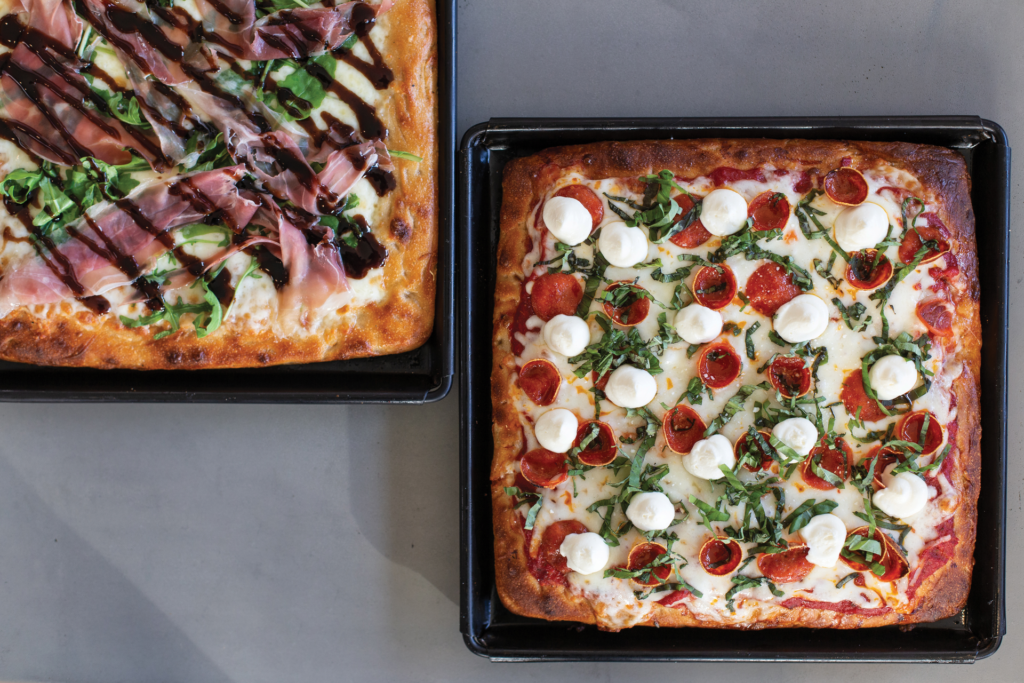 Also on the first floor: an experimental outpost of Providence Pizza, the Grandview pizza parlor run by Rhode Island-born brothers Luke and Aaron Salvatore. At Parlor, the New York-style slices are predictably solid — thin enough to fold, sturdy enough to keep the points from drooping toward your lap like the nose of a guilty dog. But the novelty here is the Detroit-style pan pizza, which has a texture worthy of its calorie count. Order the Sicilian, which tops that thick, crisp-bottomed base with sausage, bacon, and wee pepperonis, their edges curled to form dainty li’l cups of grease. The oil-kissed crust is alternately crackly and chewy, the cheese is wantonly applied, and the pizza is large and hearty enough to serve four New Englanders (or two Midwesterners).

If you aren’t excited about Scandinavian food, get on Katee McLean’s and Josh Rogers’ level. No, literally — get on the second level of Parlor and make a beeline for Vildhäst, where the pair shatter preconceptions of cold-weather cuisine with creatively adorned sausages and fries cribbed from the weed-stoked fever dreams of a hungry Dane. There’s nothing bland or ludefisk-y about the food here.

McLean and Rogers also run Krokstrom Klubb & Market, in Midtown. While Krokstrom has more small plates and fine-dining touches, Vildhäst is a solidly casual tribute to Scandinavian street food. If you haven’t had the tunnbrödsrulle, give it a whirl after a night out: no food speaks to the liquor-pickled soul quite like a flatbread stuffed with a hot dog, shrimp salad, mashed potatoes, and mayo and curry ketchup. But you can nab a version of the dish at Krokstrom, so my pick’s the Copenhagen street dog: a bright-red pickled frank trimmed with cucumber slices, a sweet and tangy dill-and-caper remoulade, and a small mountain of fried onions. If you’re craving potato chips, get the Danish “fries” — long, crisp ribbons of potato drizzled with mayo and confettied with scallions.

On the second floor, chef Rachel Rinas (formerly of Jarocho and Local Pig) serves eclectic mash-ups of Yucatán and Mediterranean dishes. Taco-lovers should try the musakhan carnitas — confit pork shoulder brightened with sumac and warmed with Bahārāt before a thorough crisping on the flat top.

But Rinas’ sides and mezze are the main draw. The dark horse to order here is the muhammara, a rich and smoky red pepper dip served warm. Rinas’ version has a deep, nutty flavor thanks to the pepitas, and the pita served alongside isn’t an afterthought. Each wedge of flatbread is chastely charred, comfortingly chewy, and lightly mossed with cotija cheese. A bonus: the dish comes together quickly, making this an ideal table snack while you wait for the lines to die down. 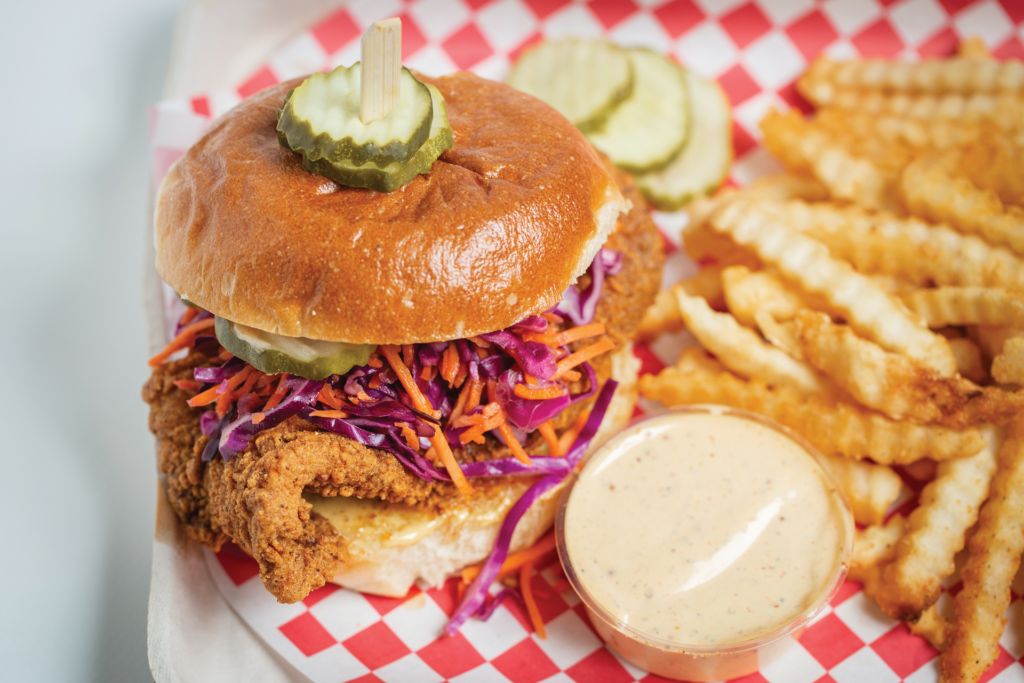 Nashville hot chicken is so popular right now it’s even crept onto the menu at KFC. But if the long lines for Chef Derrick Foster’s version are any indication, we’re in no danger of outgrowing the trend.

The standard order here is the Come Back Sandwich, a boneless breast dredged in a cayenne-forward spice blend and fried to a juicy crisp. Diners can customize the spice level to their tolerance. For my money, the “Mother Clucker” has the ideal flavor-to-heat ratio; if you’re a medium salsa fan, go for the politer “Cluck Yeah.”

A warning: the spice blend here is a little sweeter and a lot saltier than some versions I’ve tried, and my table was mixed on the outcome. But the textures are perfect, and the sandwich is ideally engineered: a thick slab of moist, tender chicken, a firm and tart red cabbage and carrot slaw, and a bun sturdy enough to withstand it all.

Even if hot chicken isn’t your speed, stop here for the crinkle-cut fries. These are the crispest, freshest-tasting fries Parlor has to offer, fried to a pale gold and tossed decorously in a subtle spice blend. Although I suspect the Fosters change their fryer oil a lot more frequently, the spuds come tantalizingly close to “bowling alley fry” territory — which I would submit as the Platonic ideal of the form. 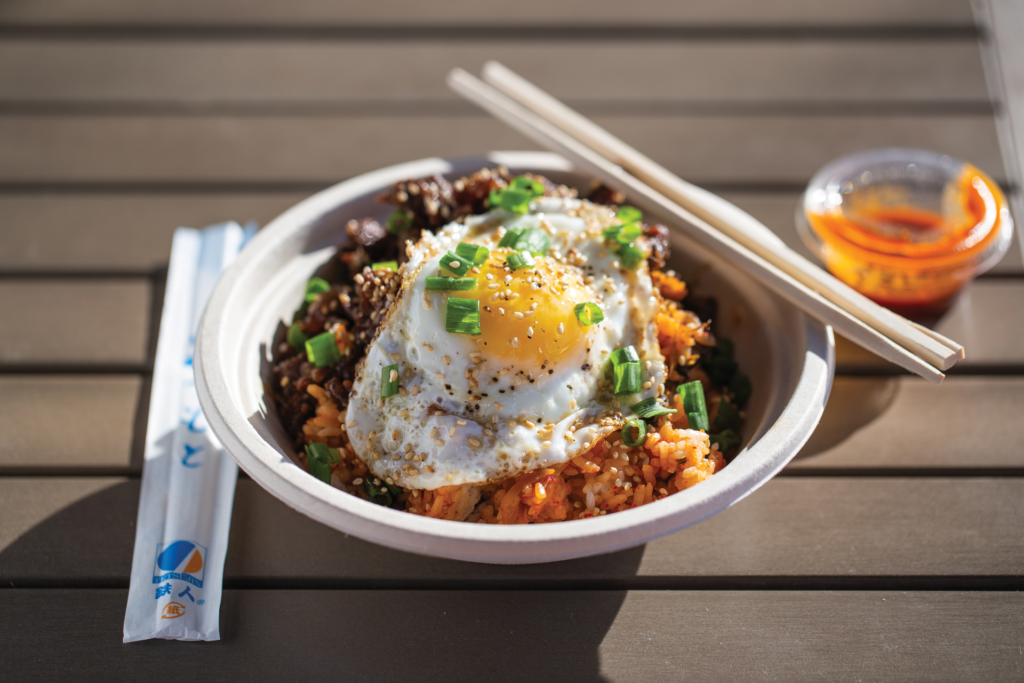 Chef Keeyoung Kim’s stall is secreted away in the very back of Parlor’s second floor, but there’s good reason to make Sura Eats your first stop. The bibimbap may be the most popular order here, but I’m going to go against the grain and advise in LOUD AND SERIOUS TONES that you order the kimchi fried rice with beef. If I didn’t have to work for a living, I’d station myself outside Sura Eats in a giant cabbage costume and proselytize to passersby.

This dish has everything: Bacon. Beef. Starch. Spice. An office-appropriate level of funk. The small bowl is packed with more flavor than seems advisable, the culinary equivalent of a Ryanair carry-on.

If you need to gild the lily, you can grab one of two (good!) unlabeled sauces that the cashier described to me helpfully as “sweet and spicy” and “sweet and soy.” They’re best in concert: the former tastes like a sweeter, milder gochujang, while the latter tastes like the dipping sauce served alongside mandu.

If you order the bibimbap with white rice, those sauces are crucial. Of course, for an upcharge, you can cycle out the white rice in favor of that KFR. It may not be “authentic.” But it’s definitely a “yasss, gurl” move.