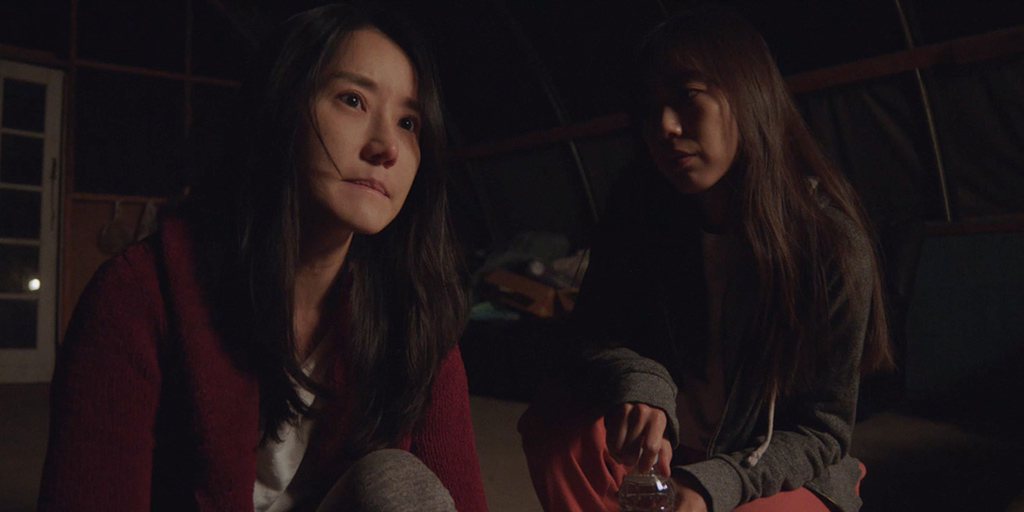 Familial trauma, sleep paralysis demons, and fractured storytelling through the lens of a haunted mind, all in under 80 minutes? It shouldn’t be possible, let alone this good. Somehow though, everything in Young Min Kim’s feature debut Dawning clicks into place. This movie leaves a lasting impression with exceptional acting and surprisingly moving writing, even if its meager budget and one twist too many threats to trip it up.

Haejin Park (Kim Ellis) is a successful New York therapist who specializes in trauma cases. Her ability to connect to her patients stems from the trauma of her father’s suicide 10 years earlier. That experience alienated Haejin her from her sister, Soojin (Veronica Kim). When Haejin learns of her sister’s recent tumultuous breakup, she heads home to California, and toward a confrontation that will challenge everything she believes to be true.

Before Haejin makes her return home, she’s ominously visited by her father’s ghost in the form of a sleep paralysis demon. Rarely has this disturbing real-world phenomenon been rendered so effectively as it is here.

Kim doesn’t pepper the film with jump scares purely for the sake of startling the audience, but uses the sequences as a way of exploring the state of Haejin’s mind.

Part horror film, part psychological thriller, part drama, Dawning flirts with several subgenres while maintaining a consistent, steady tone. The core of the film is spelled out in its simple opening dedication, to “the hurting.”

The move never demonizes anyone who’s suffered trauma. Instead, it shows the many ways it can affect those dealing with it.

Kim Ellis’ performance is the main reason all these elements come together so well. Haejin is a deeply flawed and complex character, who commands audience sympathy the more her grip on reality slips.

The film puts Ellis through the ringer, sending all kinds of terrors her way. Ellis is matched by Veronica Kim, who brings an eerie duality to Soojin; seemingly perfect on the outside and harboring dark secrets within, their sisterly bond is both ice-cold and surprisingly earnest.

At a brisk 73 minutes, Dawning explores and exhumes topics and emotional turmoil often barely addressed in stories twice as long.

Kim makes it work while adding effective narrative flourishes, one of which is the film’s unrelenting nightmarish ambiance. You could argue some of these are overdone, but whenever things threaten to drag, Kim concocts a stellar sequence to get your attention back on track.

Dawning is the sort of film that often runs under the radar, with its short runtime, and defying of easy categorization.

Missing out on this film, however, is a bad idea. Few debuts are as assured or earnestly made in their desire to shed light on the different and very real kinds of monsters that plague everyday people.