There’s fun to be had here, but it’s surface-level. 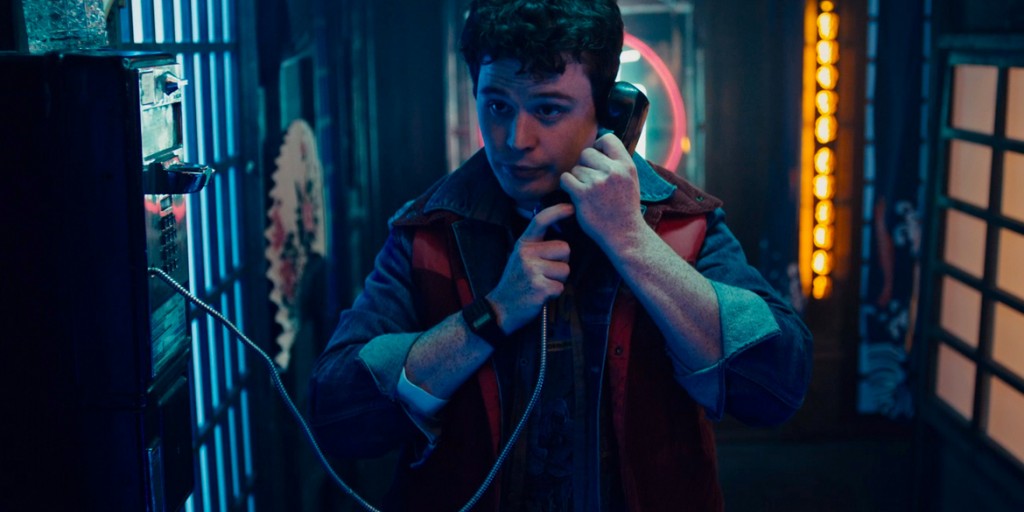 At what point did 80’s nostalgia become weaponized throughout cinema? It started with a film here, a tv series there. We’re now at a point when almost anyone can get a project made if they pitch it through the nostalgia lens. Vicious Fun trades on that, and tries to put a new spin on some tired tropes. Due to weird pacing, a script that gives its central conceit short shrift and a truly annoying lead, it ends up more of a forgettable curiosity.

ln 1983 Minnesota, Joel (Evan Marsh) has a cushy if unexciting life. He’s a self-centered film journalist who’s more than a little obsessed with horror movies. Joel’s obsessive tendencies aren’t limited only to his love of film, bleeding into all things concerning his roommate, Sarah (Alex Steele). When a new beau, Bob (Ari Millner) comes a-courting, Joel’s spider-sense is activated and he jumps into the role of protector.

Joel follows Bob to a bar on the outskirts of town, where, in a fumbled attempt to scare off the would-be lothario, Joel ends up drunk and passed out in a mop closet. When he comes to, he stumbles on a dark secret: after hours, a self-help group of serial killers sets up shop in the bar. As luck would have it, there’s an empty chair left for Joe. If he can manage to convince everyone else that he belongs among their ranks and doesn’t get killed in the process, that is.

The “Fun” of the film comes from the dozen or so archetypes that make up the support group. In addition to Bob, there’s a burnt-out intelligence operative who goes overboard in foreign wars (David Koechner), a hulking brute with a fondness for masks, summer camps and sorority houses (Robert Maillet), a Japanese chef (Sean Baek) with a taste for human, a Dr. Death type (Julian Richings) who dresses up like a clown, and Carrie (Amber Holdfarb), whose complex background is the best thing the film has going for it by a mile. Bob himself sticks out the most, a community theater-level interpretation of Patrick Bateman who’s more goofy than menacing.

Although “support group for serial killers” makes an easily marketable logline, it’s not what 90% of Vicious Fun is about. Instead, director Cody Calahan and writer James Villeneuve continually change up the story beats to cram in as many 80’s tropes as possible. This isn’t some in service of greater commentary or building a more cohesive story, but rather for the sake of cheap laughs, to the point where things kind of become a slough the more outlandish they get.

If there’s one area where Vicious Fun excels, it’s special effects. Gorehounds will have a field day with all manner of dismemberments, disembowelments, and general bloodletting. It’s what happens when the blood isn’t flowing and people have to talk to one another that slows things down. Whenever it lets things flow naturally, Vicious Fun feels compelling and entertaining, with a decent amount of gore tossed at the screen to keep things interesting. When it focuses on laughs and story, things fall apart. In a way, it feels a lot like ’80s nostalgia, where most are better off holding tightly to the good they remember than trying to dig below the surface.