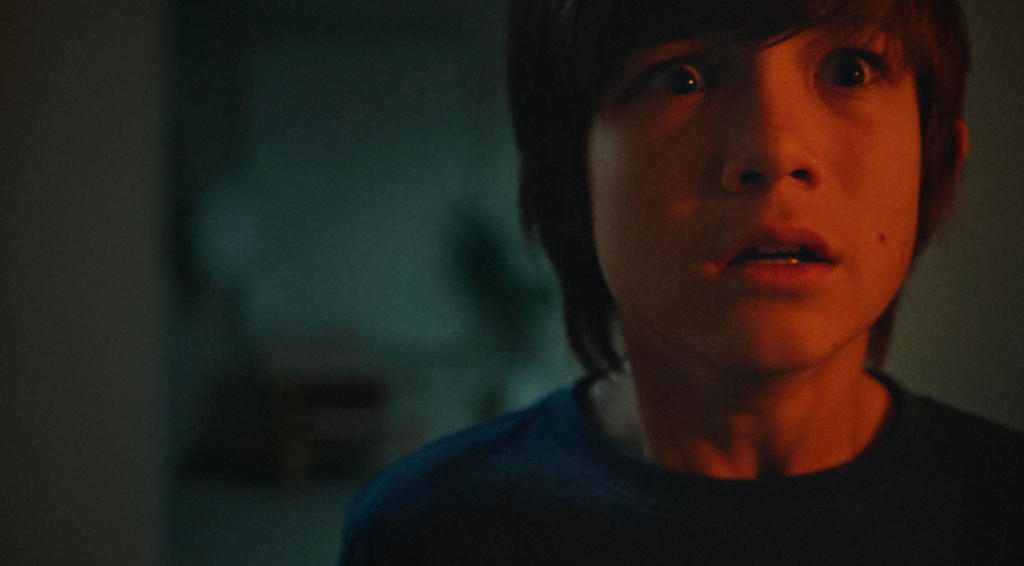 Horror is defined by occult artifacts and spells that prey on the weak or impressionable, luring them into bargaining with evil forces hell-bent on stealing their souls. The new film The Djinn fits snugly within that pantheon, pitting a young boy again a dark being at the tail end of the ’80s. Mining familiar but nevertheless compelling ground, only a few minor incongruities prevent this lean and exceedingly mean film front runner status for “best small spaces horror film of the year.”

Justin Powell & David Charbonier plunge their hero, 12-year-old Dylan (Ezra Dewey) into a 1989-set nightmare. Dylan’s moved to a new apartment with his dad (Rob Brownstein), and is eager to explore his surroundings. Only one thing holds him back: he’s mute. That along with the large y-shaped scar on his chest says Dylan has been through enough. Tack on a mother who has sadly passed away and there’s enough weight to give the character a steely resolve, while leaving him vulnerable to dark forces who might prey on his misfortune.

Stuck at home as his father takes a double shift at the radio station, Dylan stumbles on a strange assemblage of antiques in his closet. Why no one bothered to throw the items away after the previous tenant died is anyone’s guess. Among the items, he finds a leather-bound book of spells where one entry, the “Wish of Desire,” catches his eye. It seems like a simple enough thing to conjure up. A few drops of blood into a candle, an incantation in a mirror, and you’re off. Save for the fine print about the Djinn (John Erickson), who to fulfill your heart’s wish will test your wits and sanity over the course of an hour.

For all intents and purposes, The Djinn is a haunted house movie with the square footage severely reduced. With limited space to navigate, Powell & Charbonier are inventive with their scares. Dylan only has his wits to save him, but Djinn proves to be a crafty and unrelenting demon. Whenever Dylan seems to have the upper hand, the rug gets pulled from under him, to the point where it may feel as if the filmmakers are being a tad too mean. In their second film together Powell & Charbonier hone the techniques that worked for them in The Boy Behind The Door, which also dealt with young boys fighting for their lives.

With repeated manipulative flashbacks that end up trying the audience’s patience, the film feels a touch too long even at only 82 minutes. For most of the film, however, the filmmakers bend over backward to make the most of the confined setting, finding different ways to raise tension and dread. Julian Estrada’s cinematography is an understated standout, Never showy, but expertly executed in navigating the scenes. Many DPs would use quick pans to create a false frenetic sensation, but Estrada steadily glides from room to room., allowing the audience to precisely know where they are. The approach turns rudimentary jump scares into genuine shocks.

The Djinn is a solid horror film, despite the hindrance of pacing drops that occur a few too many times. Perhaps the best way to look at The Djinn is that it works perfectly as gateway horror. For younger viewers looking to have the willies scared out of them (and possibly dissuade them from cracking open mysterious books on the occult), it doesn’t get much better.