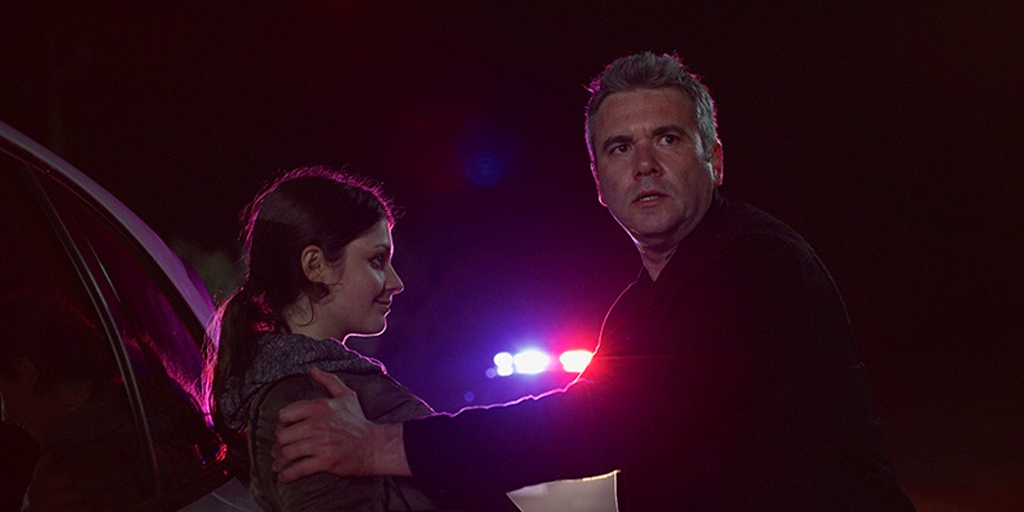 Considering how high-concept it is, it’s interesting that time travel lends itself surprisingly well to low-budget movies. The philosophical and ethical implications of the topic open it up to some pretty fraught discussions. It turns out that makes for compelling cinema even if you can’t afford to actually take someone back in time Marty McFly-style.

Night Drive makes clever use of its low-key sci-fi trappings and keeps the plot literally moving by introducing another device into the equation: ride-sharing. That’s not exactly a new approach either (as evidenced by the fact that I’ve confused it with several other similar rideshare-based horror movies at festivals over the last year), but Brad Baruh and Meghan Leon’s economical script builds up a good dynamic between its two main characters. Out of the recent films using this as a concept—regardless of budget—it may be the most interesting.

Russell (indie horror stalwart AJ Bowen) is a rideshare driver in LA with a conspicuously nice vehicle. One night, he picks up Charlotte (Sophie Dalah), a young woman who has Russell drive her to her ex’s house, where she steals a mysterious case. After Charlotte retains Russell’s driving services for the rest of the night, mishaps start piling up—the kind that involve trips to the hardware store to buy shovels. Charlotte, it turns out, is a time traveler, but her goals aren’t noble or meaningful. She’s here to sow chaos, and if Russell’s not careful, he’ll end up taking the fall for all the havoc she wreaks.

Night Drive combines elements of After Hours and Primer to create a late-night odyssey that brings up ideas of responsibility and humanity’s inherent selfishness. Bowen, playing a world-weary everyman with some significant regrets he’d like to correct, communicates those ideas best. Dalah’s Charlotte is a little harder to pin down, partly because her performance lacks the same level of nuance. The script has them bounce well off each other, but Dalah doesn’t exhibit much range or inflection, leaving her character feeling somewhat flat after a while.

That issue only stands out so much because Night Drive only has these two characters to focus on, and a tiny sedan-sized stage to explore. The movie is mainly about how Russell and Charlotte play off each other and work together (or against each other) as their circumstances get crazier, and as Russell finds out more about his passenger’s secrets. To that end, the script does a good job of economically dispensing information and letting us fill in the gaps, which leads to some clever turns of the screw late in the film.

Night Drive falls just short of great, but remains a neat, interesting character-based sci-fi story. The script is strong, and it’s a smart execution of a concept that hasn’t yet been done to death. While it’s undeniable that the film could benefit from the addition of a character or two, it still works well focused on the dynamic of that central pair. Bowen, especially, carries the film and does a lot to earn the audience’s sympathy and make the film function as well as it does.