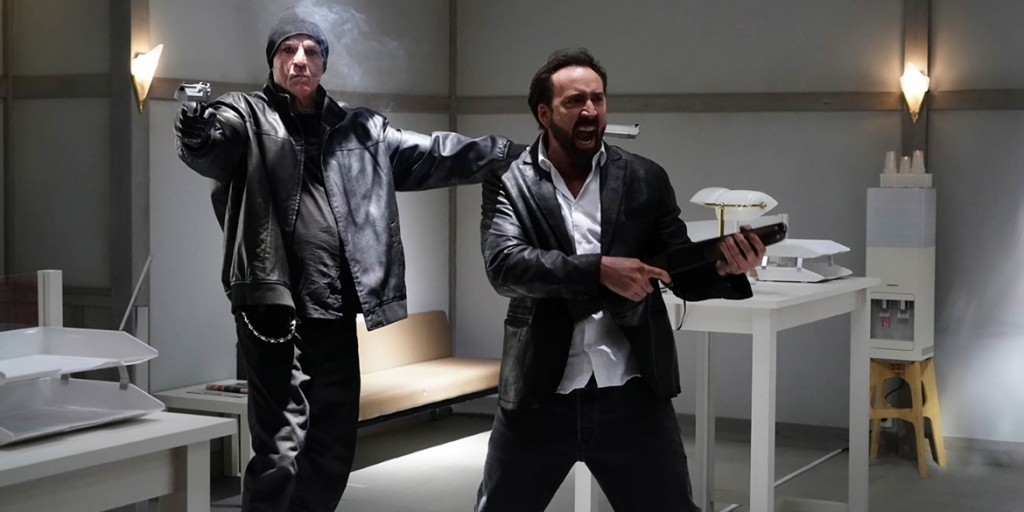 At this point in his career, Nicolas Cage is a film genre unto himself. The former Oscar winner has three modes. Engaged and manic, reserved and restrained, and barely conscious. Pair him with an inspired story and a celebrated director and the results can be magic. Though Prisoners of the Ghostland only has the former, Sion Sono is just the talent to bring out the best (read “unhinged”) performance from Cage imaginable.

In some far-off fractured land that’s likely the future (or Samurai Town, if you read the banners), an imprisoned bank robber (Cage) has sat festering for years. One day The Governor (Bill Moseley) strolls in with a potentially reasonable request. His granddaughter Bernice (Sofia Boutella) has become lost in The Ghostland, a region that might be another plane of existence or the site of a nuclear meltdown, where lost souls from across history dwell. The Governor’s proposition to the story’s “hero” is simple: retrieve Bernice in three days and he can go free. Of course, no task is ever that straightforward.

Prisoners of the Ghostland has a derivative setup, but it tries to tweak everything just enough to feel new. Instead of an Escape from New York-style ticking clock attached to a brain bomb, Cage is poured into a leather suit of doom. Fail to return with Bernice? He goes boom. Show violence or anger towards her? One of his bones goes boom. The literal bomb around his neck entices Cage to high-tail it through his trek, which is filled with oddities strewn against an unforgiving landscape.

Attempting to break down Prisoners of the Ghostland is much like explaining to someone why you’d ride a roller coaster on top of the Space Needle while suffering from acrophobia and vertigo. Any assemblage of words would sound like nonsense. But how else can you describe a movie that includes samurai ghosts, choreographed dance numbers, an ice-cream suit, exploding body parts, a ratman and his merry men who wear plastic garb that looks like fringe and feathers, in addition to a Kung Fu-feigning Cage? None of this should work. Yet it all sucks you in either by the sheer audacity of what’s unfolding or some hallucinatory visual display explodes across the screen.

With a legendary madman like Sono (the gonzo visionary behind Love Exposure and Why Don’t You Play in Hell) at the helm, you should expect lunacy. This time, however, Sono is teamed with writers and several cast members who don’t speak the same language. That incongruity initially makes Prisoners of The Ghostland enticing, but it also holds it back. Some elements are literally lost in translation.

When it comes to a movie like this, however, there’s one choice: submit yourself to the ride. If you don’t ask many questions, and let it all wash over you, a good time will be had by all. Rarely do mediocre recommendations come with such caveats. Then again, those films don’t ride the crazy quite like Prisoners of the Ghostland does.