The writer-director-actor’s debut feature is a stunner. 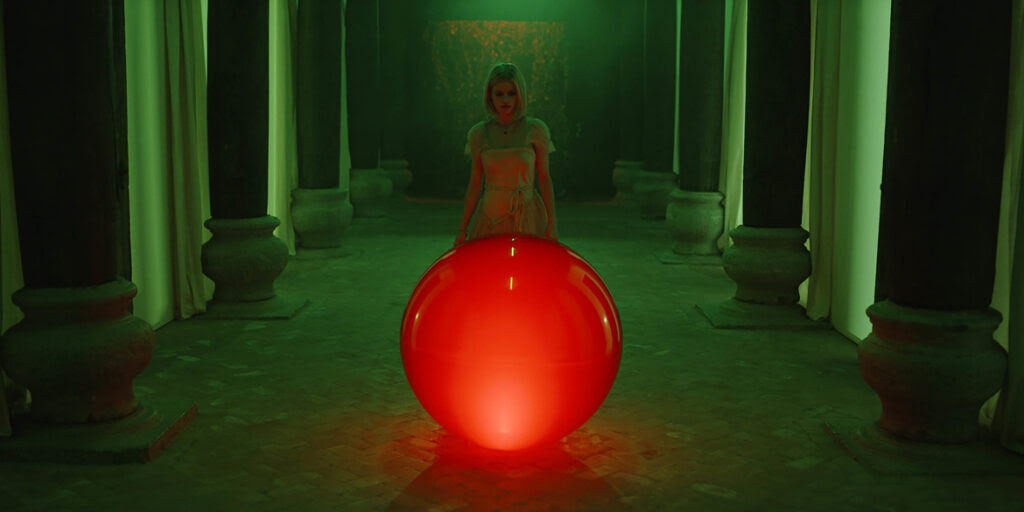 Imagine making your first movie and scoring Udo Kier, Dermot Mulroney, and Vinessa Shaw for your cast. Imagine you’re making that movie during the COVID-19 pandemic. Now imagine you’re barely 30, and not just directing, but also co-writing and starring in said movie. Because I’m a normal human being with crippling self-doubt, I can’t imagine those things. Carlson Young can, though, because that’s what she’s accomplished with her debut feature The Blazing World. Young’s movie is so good that it would be impressive by any standard. But considering where she’s at in her career and the circumstances under which it was made, it’s nothing short of incredible.

Young plays Margaret, a tortured college student who’s spent most of her life haunted by the accidental drowning of her twin sister when she was six. Called home to help her embattled parents (Shaw and Mulroney) move out of the family’s mansion, Margaret finds herself pulled into a purgatorial dimension by an otherworldly figure called Lained (Kier). Lained explains to Margaret that her sister, Lizzie, has been trapped here for decades, hovering between life and death. Margaret can save her by collecting keys from three demons that will unlock Lizzie’s soul. She must do so before the flickering candlelight in Lained’s chamber runs out, or else be claimed by the darkness.

The Blazing World displays its influences like a millennial film nerd wearing a jacket covered in novelty pins. There are obvious Alice In Wonderland references, alongside bits of David Lynch, Tarsem Singh, Pan’s Labyrinth, The Shining and even Tarkovsky’s Stalker. While these touchstones (particularly the visual nexus of Lewis Carroll and Lynch’s Mulholland Drive) might sound eye-rollingly cliche, but Young, cinematographer Shane F. Kelly and production designer Rodney Becker nail the aesthetic to the wall. Nearly every frame is awash in moody colors and painterly setups. It’s a lovely movie to look at.

If Young’s film were nothing other than pretty, that’d be enough. Thankfully, it’s also got great performances and deep emotional themes. Horror icon Kier fits right into the movie’s threatening, fascinating world. He’s equal parts Pan’s Labyrinth Faun and Pale Man, without the prosthetics (Udo Kier doesn’t need prosthetics, this is a truth universally acknowledged). As Margaret’s bitter, alcoholic dad, Mulroney gives one of the best performances of his career, at one point delivering a meaty, heightened monologue on grief and toxic masculinity that’s both heartbreaking and terrifying. Young is no slouch, either. Her Margaret is adrift and distant in all other matters except her sister, at which point she becomes singularly driven.

The Blazing World feels like a deeply personal exploration of grief and trauma, the way it puts the rest of the world through a dreamlike filter, and how unresolved pain can eat at you from the inside out. Young displays a striking clarity of vision and puts all of herself into the process behind the camera and in front of it. Doing all this, and managing to do so safely during a pandemic seems like it should be exhausting, but Young never breaks a sweat. The Blazing World displays an almost maddening level of talent and creativity. Here’s hoping it’s the start of something great.