The iconic singer Nina Simone once famously said that it’s an artist’s duty to reflect the times in which we live. Ms. Simone never lived through a global pandemic, but I like to think she’d still say the same thing today.

If nothing else, art provides an emotional and ideological outlet to reflect a creator’s experience. Some of modern history’s toughest periods have produced excellent art. Consider Britain’s anti-Thatcher punk and post-punk explosion in the 70s and 80s, or Czech new wave movies like Closely Watched Trains or Daisies that responded to the country’s communist control, or the music of the Civil Rights era, which included the aforementioned Nina Simone. This isn’t to say that large-scale suffering is necessary to produce good stuff. Rather, difficult circumstances elicit a strong emotional response, which in turn sometimes expresses itself by way of art.

So that begs the question: a year on from the start of the COVID-19 pandemic, what does the artistic response look like? In terms of film, at least, the answer is, by and large, pretty terrible. To date, there have been four notable Coronavirus-centric movies released, not counting documentaries. Three are awful. One is exemplary. What gives? To find the answer, I looked at these films one by one. 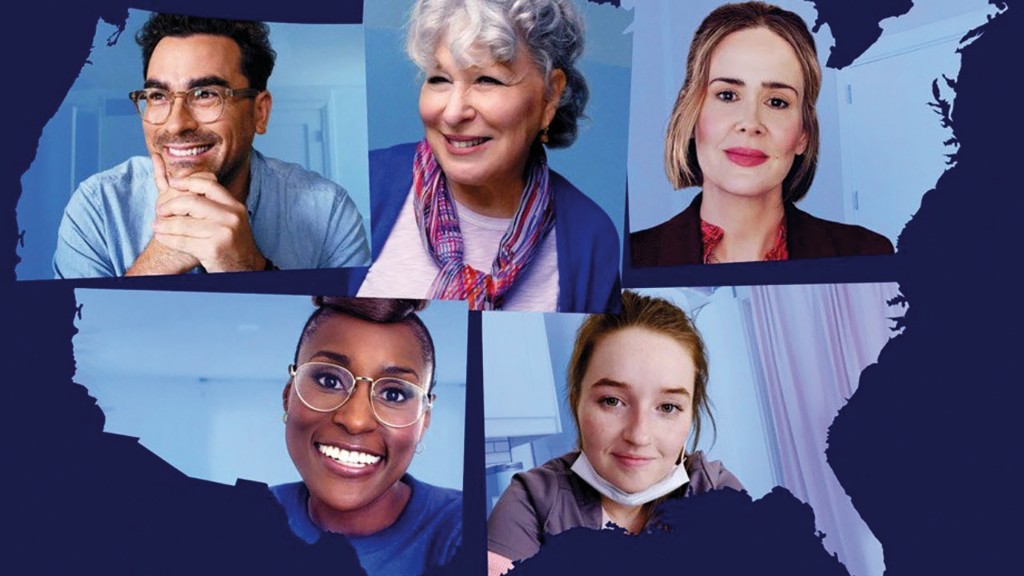 Released in September 2020, Coastal Elites was the first major filmic response to the pandemic. Initially planned as a live theatrical performance at New York’s Public Theater, after the pandemic hit, director Jay Roach and writer Paul Rudnick filmed the show’s five monologues remotely, and Rudnick revised the material to include pandemic-specific elements, as well as addressing the Black Lives Matter protests that happened last summer.

There’s really only one monologue that directly connects to COVID-19, Kaitlyn Dever’s overworked volunteer nurse, which closes things out. References to the events of 2020 are awkwardly shoehorned in throughout the other scenes. Those scenes involve each of the actors speaking directly to the camera for about 15 minutes apiece in what feels less like the “desperate confessions” promised by Coastal Elites’ subtitle, and more like a series of sermons preaching to the converted.

The film is meant to be a loving-ish satire of a certain kind of liberal, someone (in many forms) who thinks of middle America as culturally backwards flyover country. It might take a bit for viewers to realize that, however, as Coastal Elites seems to sympathize deeply with these enlightened folks who escaped life in the hell of the midwest. The worst of these is Bette Midler’s Miriam, a caricature of a New York Times-loving elitist who, by the end of the show, we’re meant to feel pathos for.

Dever’s Sharynn, the lone non-coastal character (she’s from Wyoming) offers no helpful cultural counterpoint, and if anything, validates the perspectives we’ve been enduring for the last 75 minutes. She’s won over by these bold New Yorkers who speak their minds and curse with abandon. Responding to a patient’s gallows humor of just hoping her cough is cancer, Sharynn comments “We don’t say shit like that in Wyoming.” I’ve never been to Wyoming, so I won’t presume to speak for them. In Missouri, however (and Kansas, too), we say shit like that all the time. 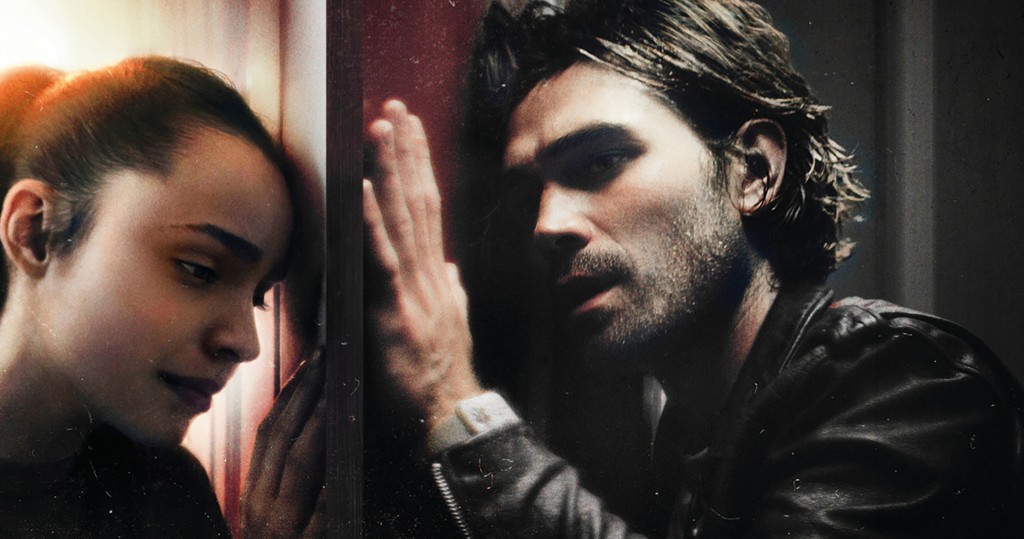 The Michael Bay-produced Songbird was filmed during the pandemic, imagining a future three years from now where a rapidly mutating COVID-19 virus has turned the U.S. into a post-apocalyptic hellscape. Unless you’re certified immune (so designated by a yellow wristband), leaving your house means you’ll be shot on sight by government goons. If you fail a daily virus check, you and your household are shipped off to the Q Zone, which we’re told is a cesspit of disease, death, and despair.

Making a movie that validates the baseless fears of people who believe wearing a mask impinges on their rights feels irresponsible at best. Songbird, however, is worse than irresponsible. It’s extreme scaremongering that ridicules anyone who’s been taking reasonable precautions over the last year, and laughs in the face of public health officials who have been trying like hell to do their jobs in the face of increased stress. If you want full details of the plot, check out Katey Stoetzel’s review on our website. The future depicted in Songbird is not only absurd but fully avoidable. Just wear your damn mask and get a vaccine. It’s not that hard.

Expressing paranoid fantasies based on faulty logic and poor research is one end of the bad COVID-19 movies spectrum. The other end is people grudgingly abiding by the rules and complaining about the few luxuries they’ve lost, while still living in relative comfort. For that, you can look to Locked Down, the Doug Liman-directed, Steven Knight-scripted heist rom-com. It’s a movie about wealthy people, starring wealthy people, whinging about issues neither they nor their characters seem to have a real grasp of.

Paxton (Chiwetel Ejiofor) and Linda (Anne Hathaway) live in London in a well-appointed modern townhouse. Their long-term relationship appears to be at an end and Paxton, a delivery driver, has just been furloughed. Linda, an executive at a company that does event coordination for high-end designers, is being forced to lay off most of her office. Because London’s on lockdown, they’re forced to stay in their house together, becoming increasingly sick of the sight of each other post-almost-breakup.

When Paxton’s old boss offers him an under-the-table driving gig for Harrods department store—where Linda also has to pick up a priceless diamond belonging to one of her company’s clients—Linda gets the idea to steal the diamond, screwing over her employer and netting her and Paxton enough money (which they already seem to have plenty of, but whatever) to never have to work another day in their lives.

The setup has some appeal: shoot a film during lockdown while using the distance and protocol restrictions to your creative advantage. However, Locked Down falls into the same trap as Coastal Elites by whining about how hard life is now from the perspective of people who, lockdown or no, have very little to worry about. Paxton and Linda may be in unpleasant personal and professional situations, but even without jobs, they aren’t hurting for cash. Nobody they know has died. They can still access many things they enjoyed before the world fell apart. Comparatively speaking, they’re doing great.

Paxton and Linda are also insufferable, and the casting doesn’t fit with the stories we’re given. Paxton is a smart guy, but has a criminal record that prevents him from getting a better job. He’s also a biker; he and Linda first met at a Sturgis rally. Hathaway looks like she wouldn’t be caught dead at such an event, particularly when she’s wearing designer silk pajamas to her Zoom meetings in a home office straight out of Architectural Digest. For his part, Ejiofor makes no attempt to give Paxton characteristics that fit the details we’re given about him. He looks and sounds like a drama school graduate, not someone with a hog and a rap sheet.

Locked Down is an excuse for rich, bored actors to have fun, which feels like an out-of-touch artistic response when over two million people have died and millions of others (most of whom don’t live in nice townhouses) have lost their jobs. There are many practical reasons why Locked Down doesn’t work, but most of all it’s just completely blind to the actual struggles of normal people.

Rob Savage’s Host is only 68 minutes long. It takes place entirely over video chat. It’s also the only movie made during the pandemic, addressing the pandemic, that not only works but excels. Like Locked Down, Host works within the constraints of the UK’s lockdown conditions. Here, though, those restrictions and the creative opportunities they present are Host’s sole interest. Where the rest of these films focus on what’s been lost, by people who haven’t actually lost that much, Host takes a more pragmatic approach, asking “What can we do with what we’ve still got?”

Host follows a video chat between friends doing an online seance to distract them from the monotony of quarantine. Haley (Haley Bishop) is the experienced one. Jemma (Jemma Moore) is the skeptic. Emma (Emma Louise Webb) and Caroline (Caroline Ward), each ensconced in their own quarantine situations, are a little nervous. Radina (Radina Drandova) is distracted by her live-in boyfriend, who she doesn’t much like. Teddy (Edward Linard) is equally distracted by his rich girlfriend Jinny (Jinny Lofthouse), and her parents’ well-stocked bar. The seance starts harmlessly, but after Jemma jokingly fakes the presence of a spirit, things go terrifyingly awry.

Savage directed Host over Zoom, with the actors operating their own cameras. As the malevolent spirit they’ve unwittingly conjured becomes increasingly frisky, Savage instructed the actors in how to do their own lo-fi practical effects to make doors slam or objects fly around the room. Savage and his actors get incredible mileage out of their laptop cameras, using their limited range and framing, as well as animated Zoom backgrounds and the occasional dropped call, to deliver a steady stream of effective jump scares. Host sets up the tension early on, and doesn’t let up until its final seconds.

Host is the first of this early set of artistic responses to COVID-19 that actually works, because the filmmaking operates under the same principles that help actual human beings survive day to day right now. There are, of course, plenty of reasons to feel anxiety or grief currently. It’s often easier, however, to process these feelings with a little bit of distance, and larger context. In the moment, we’ve learned over the last year that we have to take care of the needs directly in front of us. During a pandemic, that means getting creative, not wallowing. Host would be an effective horror movie in any year, but in 2020, it was a reminder that good art that responds to a current situation is still possible. All it takes is a little ingenuity, good friends, and a will to make it work.