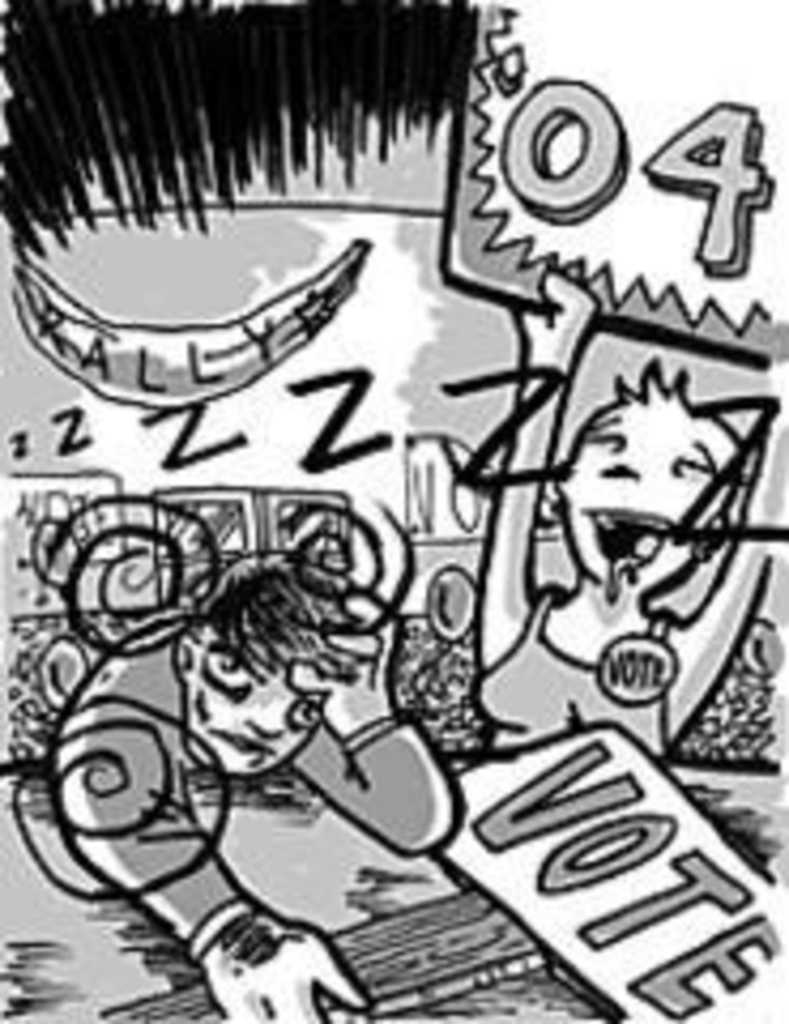 The weekly rag the Strip works for gets printed on Tuesday nights, so by the time this issue hits the streets, the election will be over. We figure there’s a pretty good chance that by the time you see this, sometime after Wednesday morning, the presidential race will still be in question, and the country will be plunged into a constitutional crisis. Or maybe it’s all over and the Giant Douche or the Turd Sandwich1 has already been named president-elect. Fact is, this meaty slab has no idea, because as it’s typing this, the election is still days away.

So think of this column as a kind of half-assed wormhole, a time-travel portal between you, the reader with a post-vote hangover, and your ever-lovin’ meaty narrator, who wishes desperately it was there with ya.

Where you are, things may be nicely settled. But back here in pre-election-land, things still suck harder than a lot lizard at a trucker’s convention.

The TV’s still droning on at all hours with reprehensible horseshit dressed up as campaign advertisements, and The Kansas City Star is shamelessly pushing Bistate II like the shill for big-money interests that it is. Once again, this time in a column from sports guy Joe Posnanski, the Star pushed the notion that voting for Bistate II is our solemn duty as a “big league” city. Because, Joe tells us, we’re lucky we even have major league sports in this town, so it just makes sense that we gotta take a tax increase up the keister once in a while as a sort of penance. Apparently, it would just be bad form to reject the plan because, well, it’s just not a particularly good plan.

The Star‘s cheerleading for Bistate II reached a fever pitch before Election Day, and its incessant flogging may have pushed the thing over the top. We can hardly wait to find out.

Meanwhile, the geniuses at the Star thought it would be useful, less than a week before the election, to print the results of a poll which showed that old white people in Missouri were leaning toward Republican Matt Blunt for governor. Of course, the story didn’t actually mention that the people polled were a bunch of Geritol-guzzling crackers until you’d turned the page and got most of the way through. But hey, that’s what they pay us for, to root out those pesky details that most busy Star readers tend to miss while they’re sitting on the can.

But perhaps the most alarming pre-election moment for this political porterhouse happened in a conference room discussion of Fahrenheit 9/11 at the Northeast branch of the public library more than a week before polling day. The Strip had been invited to the event by a regular reader, Bryan Stalder, who admitted he dips into this column from time to time for the apoplectic effect it has on him. This pot roast of provocation was overjoyed to hear that it was filling the role of Goldstein for Bryan’s weekly two-minute hate2, and it accepted his invitation immediately.

Bryan had convinced the library to show Michael Moore‘s filmic op-ed for Northeast locals who hadn’t caught it in the theater or, as in Bryan’s case, couldn’t bring themselves to spend money that would end up in Moore’s pocket. But just to make sure things didn’t get out of hand, the library brought in its own moderator, who did his best to keep the post-film discussion nice and civil.

That plea for intelligent discourse didn’t hold back one good old boy, who readily volunteered that “dat dere film” (yes, he actually used the words dat dere film) was based on a “lotta bullshit.” There was the scene near the beginning, he went on to explain, which featured “dem dere Florida coloreds” in the Congress who objected to the 2000 vote but were shouted down by Vice President Al Gore. We didn’t catch his point exactly, but we did wonder what swamp he’d crawled out of, and it made us shiver that he’d soon be punching dat dere ballot.

But he was topped by the woman sitting next to him — his wife, we think — who objected to all the unsettling footage from the war, the kind of stuff that hasn’t made it onto the networks. Soldiers maimed in street fighting? Kids killed by crossfire? Doubts expressed by demoralized American soldiers? That just didn’t jibe with her Iraqi war. She and her husband had watched the teevee nearly around the clock last year when the invasion started, watching the troops with the “embeds,” as she put it, and why wasn’t any of that in the movie?

This meat patty was struck by the sheer effort it must require to maintain the woman’s worldview. To stave off more than a year of cruddy news from Iraq and more than a thousand U.S. deaths and another 6,000-8,000 injured — as well as many more thousands of dead Iraqis — so she could hold onto those shining first few weeks when it all had looked so easy.

We sorta figured we knew which way she was voting.

Not that the dumbassness is all reserved for one side. If there’s one thing that the Strip hates hearing every friggin’ four years — even more than the stupid clichés about “the most important election of our time” and “the lesser of two evils” — it’s the constant complaint from whiny liberals that they’ll leave the country if someone like Bush is elected.

Here’s the Strip’s most fervent time-warping wish to its readers in post-election-land: All those anti-Bushites who said they’d move to Canada if W. won? Just move to friggin’ Canada already.

Even if it’s the Giant Douche from Massachusetts who manages to win. — as told to Tony Ortega.

1Viewers of South Park will recognize the reference to last week’s episode, which featured South Park Elementary’s election of a new school mascot. The race comes down to a choice between a Giant Douche and a Turd Sandwich. The show’s typically heavy-handed moral involves Kyle learning that however distasteful it is, all elections come down to this choice.

2What helps the unfortunate citizens of George Orwell’s novel 1984 get through their miserable lives is a weekly two-minute television address by the traitor Goldstein, which allows everyone to rave at telescreens in a very public display of raw emotion. Sort of like the effect Dan Rather has on some viewers today.