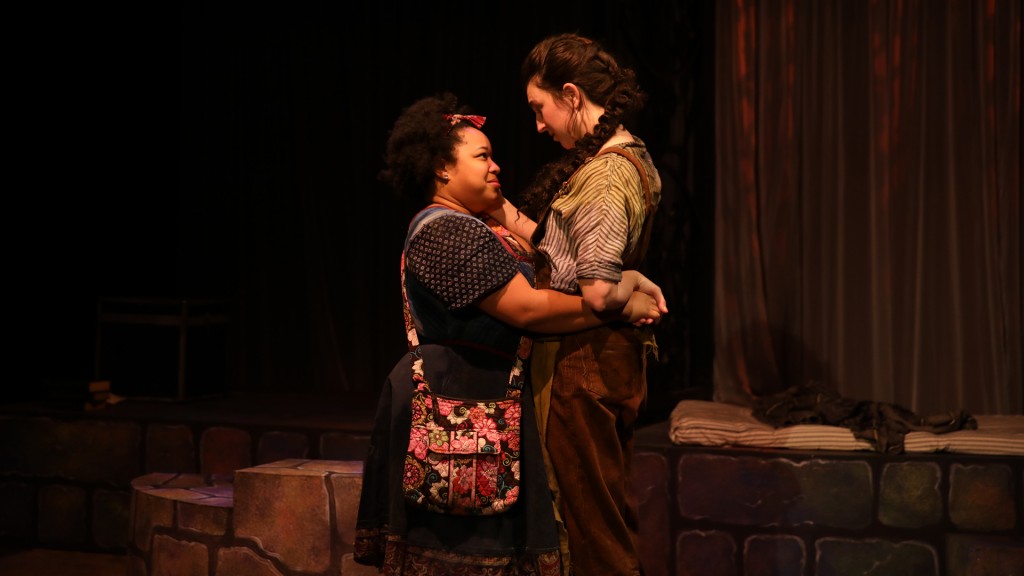 Saturday, Jan. 22, saw the world premiere of a new play at the Unicorn Theatre. Our Black Death: Plagues, Turnips, and Other Romantic Gestures, written by Lindsay Carpenter and directed by Cynthia Levin, is not your standard queer-centered romance set during the plague of mid-1300s England. [You know, that genre that encompasses sooooo many other plays and musicals.]

It’s inarguably singular in its approach. How successful it is in making the most of that setup is up for debate.

Frol (Elise Poehling) has always been in love with another woman from her village, Bit (Shon Ruffin). Frol and Bit’s love is an impossible notion, between the threat of jail for homosexual behavior and the status of both their husbands as “living.”

Then the Black Plague rolls through town. Frol’s husband only lasts the standard three days before passing and Bit’s husband… is dealt with. 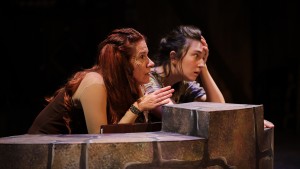 With the marital confines removed, and those in power too busy dying to enforce judgment against an openly gay couple, Bit and Frol move in together to begin the life they always dreamed of sharing.

Yes, it’s a pandemic story, just like so much other media born of the last few years has been.

We’ve given up on the notion of “pandemic fatigue” towards these kinds of stories, and instead now only care whether they find a way to stick the landing. In many ways, Our Black Death does.

Bit’s perspective on the world is that this plague doesn’t really matter—so long as she and Frol share this impossibly grand love, they will be protected. Frol’s outlook is more dire. She shares a sunny disposition toward this relationship’s ability to blossom, but sees it more as a fully limited experience.

Everyone is about to die, including the star-crossed lovers, but at least they’ll enjoy a brief window of earthly pleasure first.

The rom-com nature of the first act, and its darkly comedic approach to love, quickly gives way to a more grounded and complicated form of interaction. Frol becomes increasingly possessive as Bit tries to explore newfound independence, and jealousy begins to rise as Bit spends an increasing amount of time at the castle overlooking the village.

Though a peasant, Bit begins a friendship with The Nobleman (Sam Cordes)—a royal dandy who has locked himself in a cage for protection, yet has zero skills to survive without Bit’s aid. 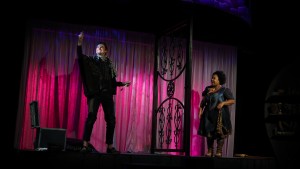 Whatever lighthearted droplets the show introduced early are evaporated by everything to follow. Our Black Death quickly veers into the realm of relationship drama, wherein multiple forms of emotional abuse and manipulation take the forefront.

While the setup and characters of the production could have taken this story in many directions, the latter half of the show stalls. The play becomes a repetition of Bit alternating between two locations and either being placed in arguments or attempting to unpack the previous argument.

The time period and the plague begin to take a backseat to fairly standard relationship squabbles until everything resolves in a sudden and drastic full-stop.

This is all, oddly, set against a backdrop of a Lovesick Lady (Manon Halliburton) using witchcraft to increasingly turn a man (Justin Barron) into a dog.

It’s a side story played for laughs until it’s just another parallel story about power dynamics in a relationship. The severity with which the other manipulation paths play out feels odd in juxtaposition to a tale of magic potions. 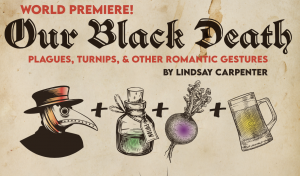 The performances are excellent, especially Ruffin’s Bit, whose overwhelming sincerity drives scenes forward even when the material hesitates. Poehling’s Frol nails a dark, comedic descent into “love” when faced with the bleakness of human frailty.

Halliburton and Barron’s ever-escalating series of enchanted mishaps bring a welcome burst of energy in each aside. Cordes’ helpless caged royal, and his unending emotional needs, provide some of the best exchanges in the show.

Our Black Death is a young show. Quite literally, on account of this being the first production. At all levels, the skill is there, and the frustration in this review only stems from knowing that it could be better.

The foundation is strong, and down the road, it will hopefully take the complicated themes it establishes but use them to say something more.

Our Black Death: Plagues, Turnips, and Other Romantic Gestures runs at the Unicorn Theatre through Feb. 6.