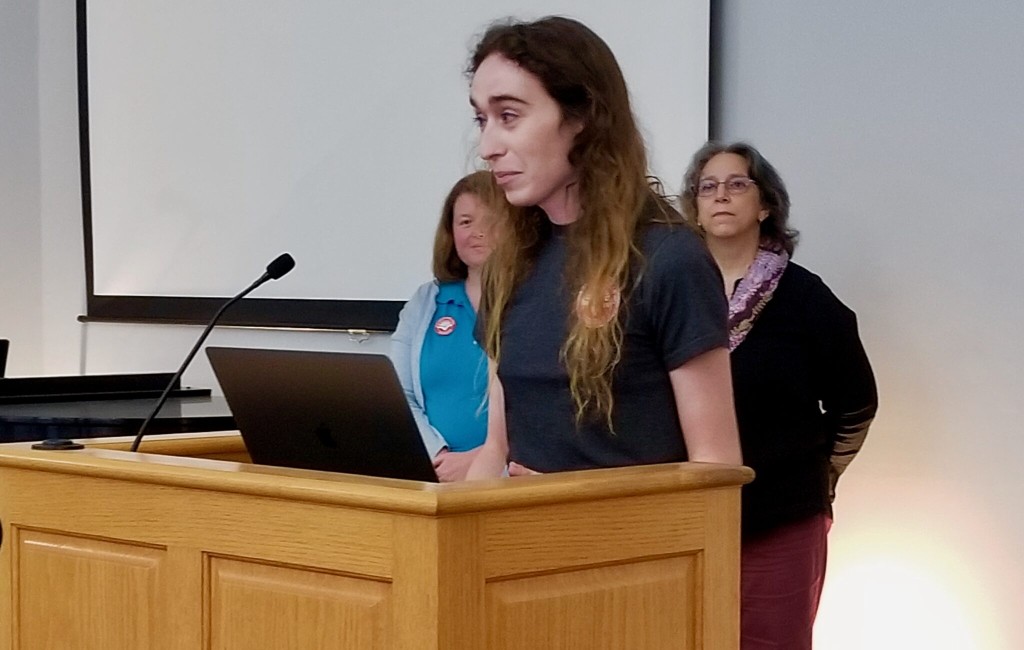 When she was 13, Dakota Hommes felt scared and alone.

She was having a crisis, didn’t feel she could talk to her parents about it and worried about her future.

Then, at a library, she found the novels “Parrot Fish” by Ellen Wittlinger and “Luna” by Julie Ann Peters, and found that other children her age also struggled with feelings they were born with the wrong gender.

“Those books gave me a way to start to like myself again,” said Hommes, a transgender woman now employed by Daniel Boone Regional Library in Columbia. The library serves Boone and Callaway counties.

Hommes, an executive board member of DBRL Workers United, spoke Tuesday during a press conference called by her union to denounce new rules from Missouri Secretary of State Jay Ashcroft governing access to library materials by minors.

“Jay Ashcroft would take those books from 13-year-old me’s hands,” Hommes said. “He’d tell me that it was forbidden to read about other kids like me.”

The rules, which Ashcroft touted in October as “protecting minors from obscene materials at state-funded libraries,” were published Tuesday in the Missouri Register. The publication opens a 30-day comment period before the rules take effect.

“When state dollars are involved, we want to bring back local control and parental involvement in determining what children are exposed to,” Ashcroft said in an October news release. “Foremost, we want to protect our children.”

The rules would require every library receiving state funds to publish policies allowing parents to designate which materials their children can access. In addition, children attempting to check out any material would need parental permission.

The rules state that “no person employed by or acting on behalf of the library shall knowingly grant access to any minor any material in any form not approved by the minor’s parent or guardian.”

Any library patron must be able to challenge the age designation for any material provided by a library.

The rules leverages the state funding provided through Ashcroft’s office and would deny the money to any library refusing to comply. This year’s budget includes about $10.9 million for distribution to libraries.

After the comment period, the rules could be revised or, if it seems unwise, rescinded, JoDonn Chaney, spokesman for Ashcroft, said Tuesday in an interview. The earliest it would take effect, he said, is sometime next spring.

The rules is intended to make state funds aren’t used to buy materials that appeal to the “prurient interests” of minors and to put parents in control of what their children read and see, Chaney said.

“There is no attempt to censor anyone,” Chaney said. “If the library wants to purchase that book, product or information, they can do so, just not with state funds. And the rule would allow parents to be able to say, ‘I don’t want my children to see that.’”

By law, a portion of state funding for libraries is distributed on a per-capita basis and a portion is used for grants to purchase technology and improve networking.

The funds are a small part of any individual library’s budget. For Daniel Boone Regional Library, state aid represents about 1.1% of the $12.8 million in revenue budgeted for the current year. Local property taxes account for 95% of the library’s funding.

The library allows children to check out materials, both with the assistance of librarians and through self-service kiosks, without limitation, executive director Margaret Conroy said in an interview with The Independent. The assumption, she said, is that parents are comfortable with their children’s choices of books and other material.

“We don’t need big government coming in and telling us how to do the job we are already doing,” Conroy said.

The library on Monday published a resolution calling on the legislature’s Joint Committee on Administrative Rules to block the rules from taking effect.

“The library will not infringe on the parent’s right to choose materials for their children,” the resolution states.

At the news conference with union leaders, state Rep.-elect Kathy Steinhoff, D-Columbia, said the rules put the state in the place of parents.

“It is not the role of the library to limit access to materials,” Steinhoff said. “Parents should make these decisions about the materials that come into their home.”

In its published policies, Daniel Boone Regional Library puts parents in charge of what their children check out.

“Parents or guardians are responsible for the choice and use of material for their children under the age of 18,” the policy on selecting materials for the library states.

A similar policy is in place for using on-site computers: “DBRL does not act in place of or in the absence of the parent, and is not responsible for enforcing any restrictions that a parent or guardian may place on a minor’s use of the internet.”

The directive that no child can check out any material unless a parent has approved the choice is impossible to enforce, Conroy said.

“There is no way a circulation clerk can know whether or not a 13-year-olds parents had approved the material,” she said.

Since Ashcroft announced his plans, the rules have been denounced by the Missouri Libraries Association, which called them “an effort to further stoke division in the communities that libraries serve.”

The League of Women Voters has also come out in opposition to the rules.

Comments on the rules are being accepted until Dec. 15 and can be mailed to the Office of the Missouri Secretary of State, PO Box 1767, Jefferson City, MO  65102, or by email to comments@sos.mo.gov.