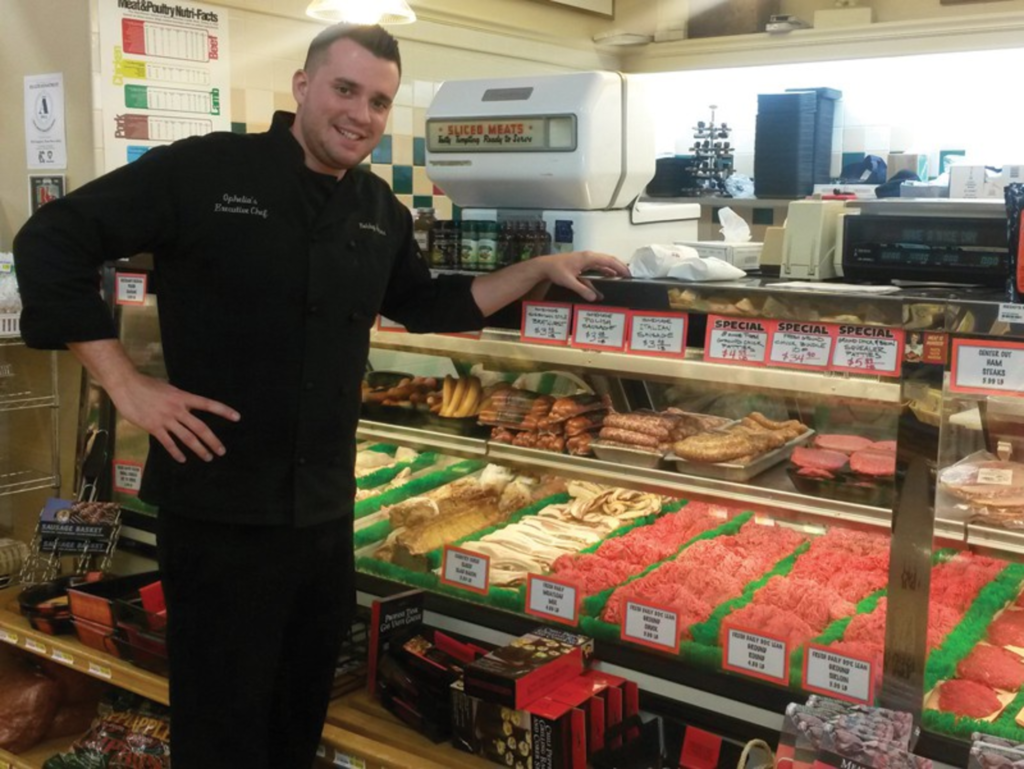 The secret to that perfect burger: The sucker has to be bad for you. We’re talking a greasy, messy tower of meat. The kind of thing for which you must unhinge your jaw. This was lesson No. 1 when Ophelia’s executive chef Bobby Stearns agreed to help me build the kind of mind-blowing meaty masterpiece that makes everyone at a cookout fall silent after the first bite.

Within two minutes of meeting Stearns at McGonigle’s Market, I was standing with him in front of the meat counter, gazing at mounds of ground chuck. At more than 6 feet tall and wearing his uniform from his lunch shift, Stearns looked like a man who knew what he wanted.

“I’m not terribly health-conscious,” he said, and ordered a pound of 80-percent-lean ground chuck. “It’s fattier, so it tastes better.”

“That’s cool,” I said, curbing my dressing-on-the-side impulses. Today I’d decided to go all out and eat whatever Stearns told me to eat. “Let’s do it.”

Stearns noted my enthusiasm and ordered two Sheboygan bratwursts. This wasn’t because of indecision; the plan was to grill the brats, slice them lengthwise and “butterfly them out” on top of the burgers.

Stearns’ cooking instructions for the burgers themselves surprised me. Instead of throwing them on the grill alongside the brats, he recommended cooking them on the stovetop with a bit of vegetable oil over high heat.

Those much-lauded black grill lines? Not all they’re cracked up to be.

“It’s a matter of preference, but I think they take away from the flavor of the meat,” Stearns said. Also stealing the meat’s spotlight: excessive seasoning. When you’ve got good-quality beef, you don’t need fancy meat rubs or award-winning sauces to make your burger sing. Stearns uses sea salt and pepper.

With the most important part out of the way, Stearns moved on to the cheese, selecting a block of muenster from the cooler. The cheese matters; rubbery Kraft Singles simply will not suffice. Stearns said sometimes he’ll go to Better Cheddar to find the right cheese, with gouda another of his favorites.

Next we needed to give our burger some pizzazz, so we drove to a Price Chopper to shop for toppings. I tend to get lost in the grocery store. Even when I make a list, I somehow find myself in the cookie aisle contemplating the structural integrity of double-decker Oreos, so it was a good thing I had Stearns to keep me on track. He knew what he wanted: a yellow onion, and red and yellow bell peppers. (They taste the same, he said, while the flavor of green bells is totally different.) I was to julienne the veggies and cook them with butter over low heat until they started to caramelize.

“You can leave them for, like, 45 minutes and just forget about them,” Stearns said. “But make sure it’s real butter.”

The veggies would go on top of the burger-brat one-two punch, and that would be topped with the muenster and chilled kosher dill pickles. “Some people like to add lettuce or a tomato,” Stearns said, “but I usually don’t.” That was fine with me; we weren’t making a fucking salad here.

At this point, the only thing missing was bread to hold all of this deliciousness in place. Much like cheese, good buns are important. Stearns prefers them fresh from the bakery, so he selected a bag of store-prepared brioche rolls. For a simple sauce to spread on the bun, Stearns said to mix equal parts ketchup, mustard and mayonnaise – “the real stuff,” he said, no Miracle Whip allowed – with a few squirts of Sriracha.

While we were waiting in the checkout line, I asked Stearns about sides. I shouldn’t have been surprised that his first suggestion was “a whole lot of stuff that’s bad for you.” He loves macaroni and cheese, as well as baked beans with a bit of grùyere thrown in. He enjoys putting surprising twists on traditional dishes, such as using jicama instead of cabbage for slaw and adding edamame to pasta salad.

Stearns and I parted ways in the parking lot, and I headed home to cook. An hour later, I had an amazing, greasy beast of a burger that lit up all of my brain’s pleasure centers. I didn’t even bother to post it on Instagram.

When I finished, I fell into a luxurious three-hour meat coma. What can I say – sometimes it’s good to be bad.