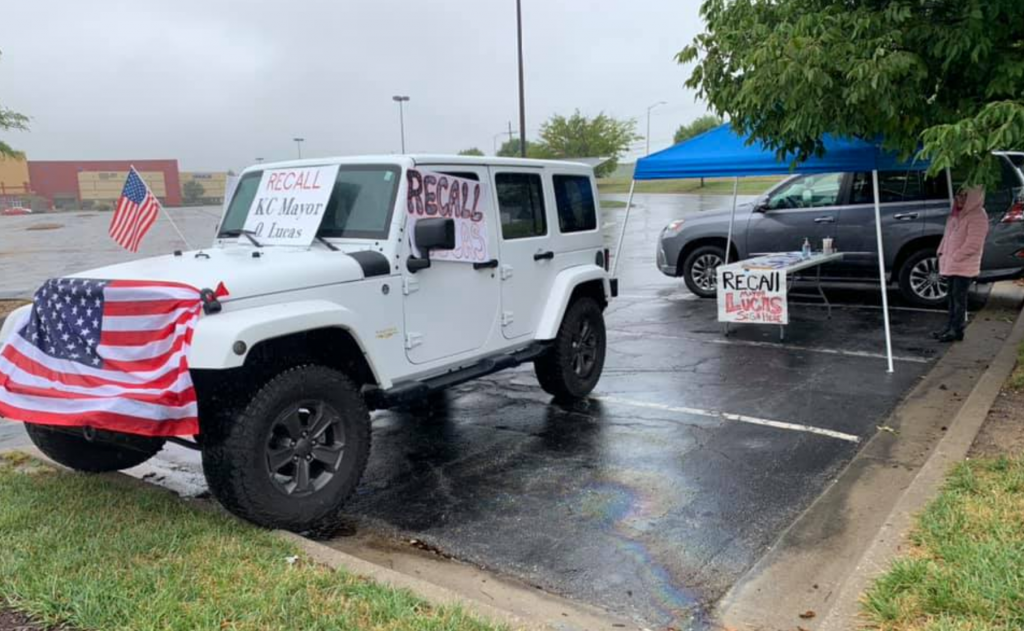 [Editor’s note: This piece contains a number of uses of racist language, quoted from a public Facebook page. This content may not be appropriate for all readers.]

A closer look into the group’s publicly-available activity reveals a dark trend of anti-Black racism, QAnon conspiracy, and ties to the Kansas City Police Department. Members frequently allude to support for, and from, KCPD officers and their families. 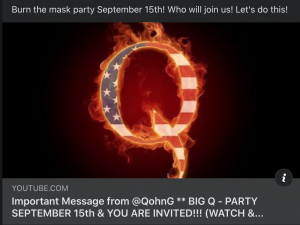 A post inviting group members to participate in a QAnon mask burning event. The first comment underneath is “Burn them all!” A meme posted in the group in August, showing just how far into right-wing conspiracy theories the conversation deteriorated. // Photo via RECALL KANSAS CITY MAYOR QUINTON LUCAS Facebook group

The recall is organized through a Facebook group titled “RECALL KANSAS CITY MAYOR QUINTON LUCAS” which has amassed 13,000 followers and counting. Group members come from throughout the Kansas City metro area (group members have mentioned that many come from the Northland), rural Missouri, and from as far away as Tacomah, Washington, and Texarkana, Arkansas.

The Facebook group’s “About” section says the group’s aim is to recall “tyrant” Mayor Lucas for “egregious disregard of our Constitutional rights, and insane, anti-scientific mandates.” The group’s admins post signature-gathering locations each day, and occasional Facebook videos promoting the campaign and other events like anti-mask protests and “Back the Blue” rallies.

Comments from the public Facebook group are quoted as they were written.

Group admins have posted comments discouraging overt racism. They ask group members to report offensive posts, and sometimes will turn off comments on posts. Administrators posted that the recall isn’t racist, and has no position on the Black Lives Matter movement. A closer look at posts and discussion, however, shows that the group’s stated intention isn’t living up to reality.

On a September 7th post, one commenter said, “the era of the shuck and jive negro politicians is come to an END. No more excuses time for superior intellect and Solutions to reign!” No one pushed back on the comment. No one took it down. “Thank you for your support,” someone replied. “We are one city and we need to stand together to make it better for all.”

A meme about another person of color in politics that has nothing to do with Quinton Lucas. // Posted by Jacque Baker in RECALL KANSAS CITY MAYOR QUINTON LUCAS Facebook group

Among the group’s most engaging posts—posts with the most comments, shares, and likes—are posts that criticize Black leaders, the Black Lives Matter movement and allyship for the movement. Commenters frequently called BLM “terrorists” (they are not). Posts criticize the city’s recent Black Lives Matter mural project (“BLM is trash. Anyone who supports this terrorist organization is a trash human being,” said one) and the Kansas City Chiefs’ decision to recognize social justice in its opening game. When describing what the recall is about, one member said “This is also about BLM that’s why I volunteer.” (“I volunteer because of BLM too,” replied another.)

The group frequently touts support from Kansas City Police Department officers and their families. A photo posted on September 6th showed a volunteer sipping a shake at a signature-gathering table in a park, with the caption, “Had a great day today. I really want to thank the Kcpd daughter that brought us some lemonade shakes. Your support makes us proud to be part of this.”

One of the group’s leading organizers, who posts Facebook live updates and locations of signature-gathering tables, posted a photo of herself wearing a shirt that read “I DO F THE POLICE” (the letter “o” in the word “do” was an image of a wedding ring—hint hint).

A September 6th post from Chris Gerlt reads “If the Mayor is doing such a GREAT JOB then why are City employees and KCPD officers’ signing the recall.” The post was shared 91 times and attracted more than 120 comments, including posts saying “I had several officers sign,” and “the police are signing faster than anyone else.” A September 2nd post reads “we have many officers wanting to sign.” Signatures, however, have not been made public.

Along with anti-Black and pro-police messages, the page frequently attacks masks and public health information around the coronavirus pandemic. In photos of the recall’s signature-gathering and a recent rally it hosted, few if any attendees wear masks, and are not practicing social distancing. A post on September 8th called upon members to “burn your masks;” within two hours, it was shared more than 60 times and attracted over 250 likes. A September 6th post positing that masks reduce the wearer’s immunity—an idea not backed by science—attracted over 300 likes and 134 comments. 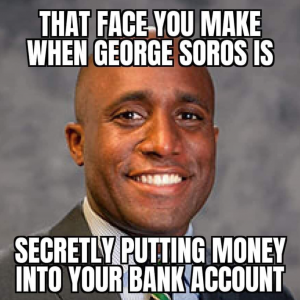 A meme posted in the group in August by Mindy Maucelli, showing just how far into right-wing (and frankly embarrassing) conspiracy theories the conversation deteriorated. Also, one of the tamer shares on the page. // Photo via RECALL KANSAS CITY MAYOR QUINTON LUCAS Facebook group

Contrary to the group’s beliefs, masks work. A Wichita Eagle and Kansas City Star study of COVID-19 cases in Kansas found that mask mandates correlated with a drop in cases, and areas without mandates saw an increase in cases. Some posts and comments within the group call for the city to “open,” yet all Kansas City businesses, including bars, are already allowed to be open, though with public health safeguards.

The recall effort blames Mayor Lucas for Kansas City’s riots, but again, research points to another cause. In more than fifty years of research on riots, including three federal commissions, researchers found that police violence—weapons, tear gas, and mass arrests, all a common sight in Kansas City’s early protests—are a significant cause of riots. Half of the Civil Rights-era urban riots studied by the 1967 Kerner Commission, it turns out, were sparked by police violence. Even intimations of violence—wearing riot gear, for instance—can trigger riots. Researchers urge police departments to de-escalate their responses to protests, and they urge cities to improve pathways to resolve public complaints regarding police violence.

To justify support for police, the recall group’s members post news about Kansas City’s homicides. More policing would prevent this and Mayor Lucas is to blame, the posts imply. Wrong.

It has been months since George Floyd was murdered on that Minneapolis spring day. Our nation has undergone a racial awakening, but to what extent? A September 3rd Ipsos poll found national views around racism have become more partisan, with a scant 1 in 10 Republicans supportive of protests (3 out of 4 Democrats, by comparison, support protests). Instances of backlash are mounting, with pro-Trump paramilitary activists killing protestors in Portland, and here in Kansas City, there’s no reason to believe we would be immune. The Kansas City Star brought to light racism and ostracization inflicted on a biracial family when they settled in a Northland neighborhood—but the vast majority of cases go unreported.

Intentional ignorance about our safety and health—whether in the form of racism, riots or masks—does not make America great. And yet, our nation’s highest office embraces callow blindness. On September 5th, Donald Trump directed all federal agencies to ban anti-racism training, calling it “divisive, un-American propaganda.” Implicit bias and critical race theory training had been implemented because studies verified that federal agencies disproportionately awarded contracts to white-owned businesses. The federal government is the nation’s largest employer.

Recalling Mayor Lucas would not stop violence, and it would not stop COVID-19; to the contrary, this group’s proposed solutions would make these problems worse, and raise questions about emboldened racism in our own backyard.

A GoFundMe was launched to raise money for the cause. Even within the group it was met with questions from supporters of who the “grifters” were who were running this, and where the money was going. 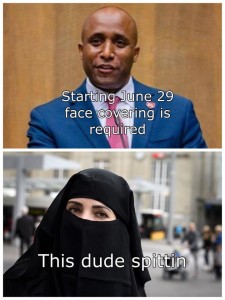 “Then throw me in jail you c********* I’m not going for it. No f****** mask,” Bruce Yorkovich replied to this post. // Screencap from Eric Green, via RECALL KANSAS CITY MAYOR QUINTON LUCAS Facebook group

Regardless of the recall’s success, its organizers can claim victories. The group amassed thousands of followers, who use one another for self-affirming feedback loops that perpetuate false beliefs and actions tied to those beliefs. Facebook’s terms of use allow the group to rapidly spread its disinformation and racism to fellow Facebook friends and followers across the Kansas City metro. They are building a volunteer list that can be mobilized in the future. And they’ve already said they are setting sights on the City Council.

The recall needs 13,241 certified signatures before September 24th; if petitioners fail to reach that count on time, they will be granted ten extra days to gather more. The group’s leaders aren’t saying how many they’ve gotten.

The group’s Facebook page is public, as of the publication of this piece. Anyone can view or comment on the posts, report offensive content, or report the group. Relatively few posts internally challenge the group’s racism and anti-mask theories, but a few speak out.

On a post shared September 4th, a commenter asks: “Is there a black man in office that y’all like?”

In summary, if you’re someone who spent the weekend claiming that it wasn’t possible that any booing happened during the Black Lives Matter moment at Thursday’s Chiefs game because racism doesn’t live here—well, you’ve got literally thousands of posts in this single group that you’ll need to find excuses to explain away.

You can search the group to see which of your friends, co-workers, and neighbors are among the nearly 13,572 members proud to support this community.