One Direction charmed the crowd, wasted a lot of Powerade at Arrowhead last night 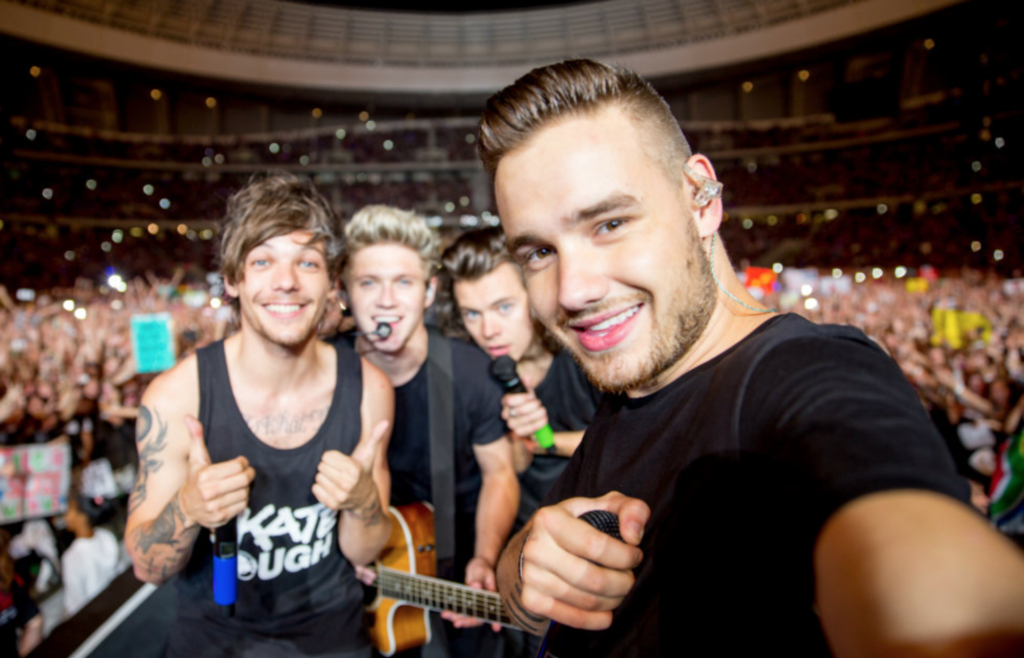 With the unspoken acknowledgement between the two of us that yes, it was kind of awkward that a grown man was asking her a lot of questions about One Direction, the girl next to me assured me it’d still be a good show without quitter Zayn Malik.

Screaming for 1D started early as the four members were glimpsed walking backstage from within the depths of Arrowhead. The lights went out, fireworks went off and the band opened with “Clouds,” playing against a stage that looked like it’d make a sweet Trapper Keeper. 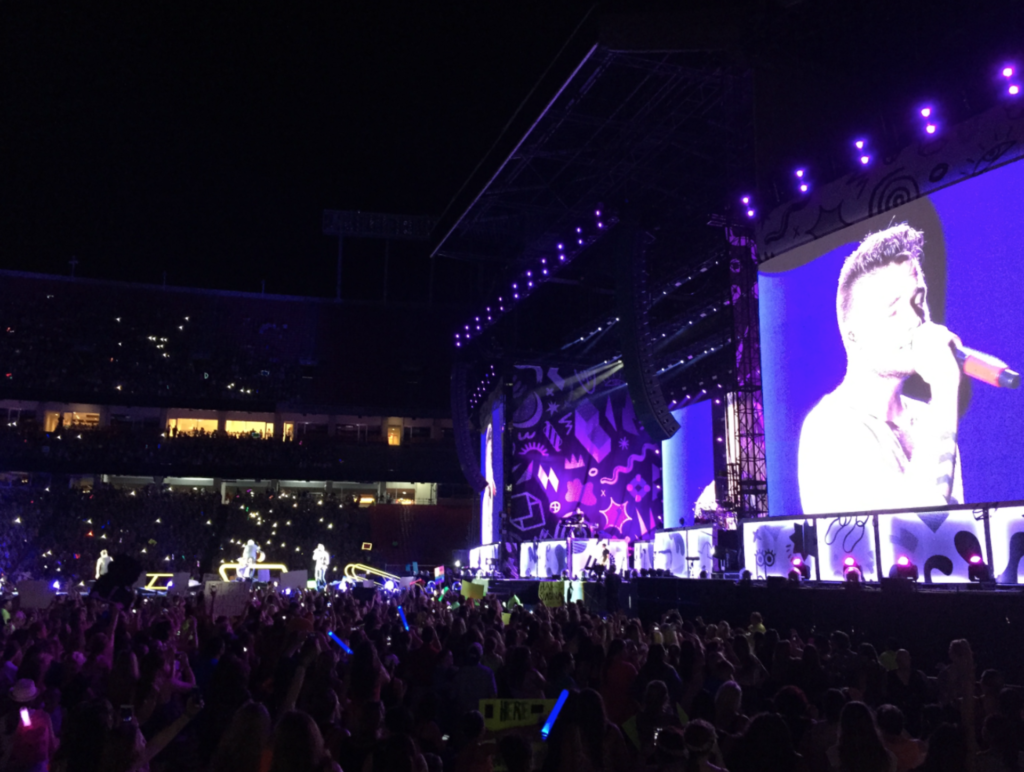 From there, it was a swift tour through 25 of 1D’s songs from their four albums. The first few were seemingly built for stadiums, especially during the Van Halen-like synths of “Steal My Girl” and the arena-rock throwback “Where Do Broken Hearts Go.”

That second one asks a poignant question. For the answer, maybe ask the girls who kept holding up their looseleaf notebook paper signs toward the jumbotrons at the front of the stage because they couldn’t see 1D was actually on the walkway extending into the sold-out crowd.

Every girl around me — and I say girl, because I’m pretty sure I was the only male in my section — knew every word to every song. For most of the show, Niall Horan had his guitar strapped to him, alternating between either looking like he was concentrating really hard on playing guitar or like he was 100% surprised he was playing guitar.

After two standouts from 2014’s Four — the Haim-ish “Stockholm Syndrome” and straight-up guitar-pop of “Fireproof” — Liam Payne took a break to read some of the fans’ signs. One said: “Niall, would you please pay for my medical school?” That’s probably a 1D superfan inside joke I don’t get, but kudos to that girl. Education is important.

Following “Little Changes,” which is so sensitive that the jumbotrons switched from color to black and white, Harry Styles talked American football with one of the dads he managed to pick out of the crowd.

“You’re a Raiders fan?” Styles confirmed, surprised since 1D are pros enough to know not only that they’re in Chiefs territory but that Kansas City is in Missouri. “I support the Raiders, said no one ever,” Styles continued, although Ice Cube might beg to differ.

Then came the smooth jam “Night Moves,” another one from Four, which a certain dad — who sometimes reviews rock shows — may have purchased for a certain daughter and is presently realizing he digs quite a few of the songs on it. (Not “Ready to Run,” though — sometimes 1D goes too Mumford-y for this guy’s taste.) 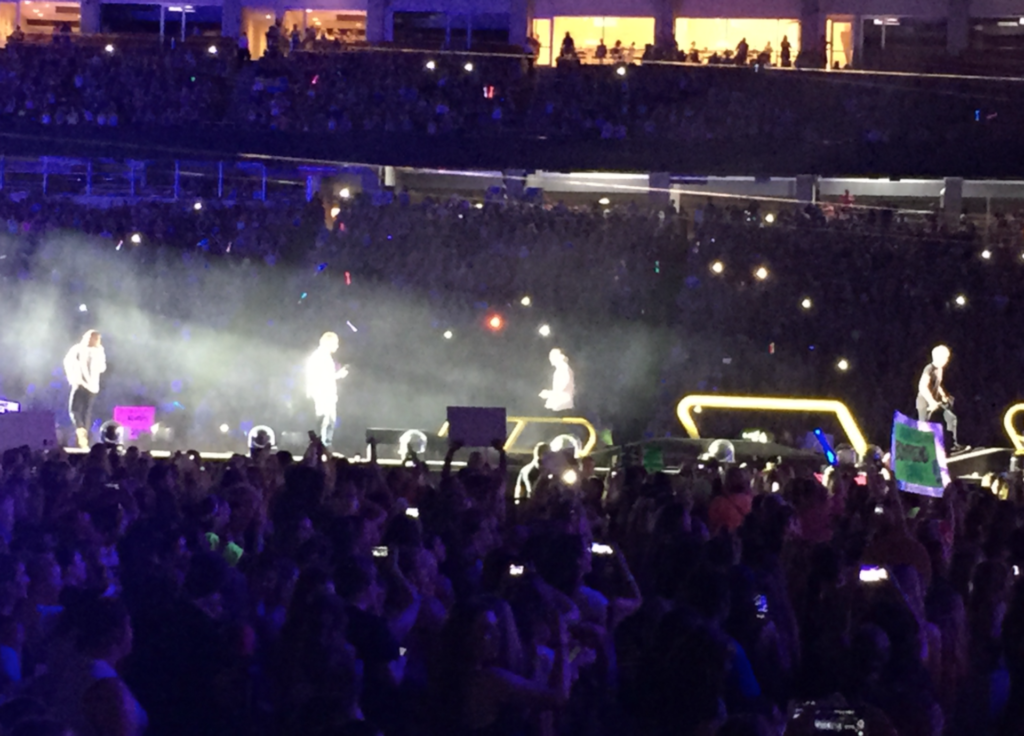 Closing out the set with “Story of My Life,” Liam Payne and Louis Tomlinson kicked around a plush sheep puppet thrown on stage. It was a brutal display, but thankfully the sheep remained in good enough spirits to lip sync the last line of the song.

A minimal amount of time passed between that and the encore, 1D coming back with “You and I,” before the worst song of the night, “Act My Age.” That’s not to say 1D has a lot of bad songs — I mean, some of the slower ones are a bit boring, but there is hardly a pop act immune to that habit — but “Act My Age” is stab-a-sharp-pencil in your ears godawful. It’s a little bit Peter Pan, a little bit Gary Glitter and a little bit Riverdance. Jigs were danced.

During the encore’s last song, “Best Song Ever,” Liam and Louis chased each other on the walkway, drenching themselves with red Powerade and instantly creating a new category of 1D fanfic. Then with a final pelvic thrust from Niall that apparently launched one more round of fireworks — a pretty rad power to have — 1D was gone.

Look, you can hate 1D because they’re a band that parlayed a third place finish on a singing show into playing stadiums and, I assume, millions of dollars (and could have an even better three-way split if Harry and Niall convinced Liam or Louis to quit, as they seem to fill the same slot and probably don’t need both), but that’s kind of a stupid reason to hate them. They’re probably decent guys. (Maybe not Harry. He’s way amused by himself, and I bet he’s exhausting to be around.)

But you can’t hate 1D because they don’t have the tunes. They totally do.

Leftovers: We made it to our seats just in time to see openers Icona Pop close with “I Love It.”

“Well, this certainly isn’t the radio edit,” I said to my plus one — my seven-year-old daughter, who wasn’t necessarily learning any new words at her first big concert, but still.

One Direction setlist:
Clouds
Steal My Girl
Little Black Dress
Where Do Broken Hearts Go
Midnight Memories
Kiss You
Stockholm Syndrome
Fireproof
Ready to Run
Better Than Words
Don’t Forget Where You Belong
Little Things
Night Changes
18
No Control
Alive
Diana
What Makes You Beautiful
Through the Dark
Girl Almighty
Story of My Life
——-
You and I
Act My Age
Little White Lies
Best Song Ever