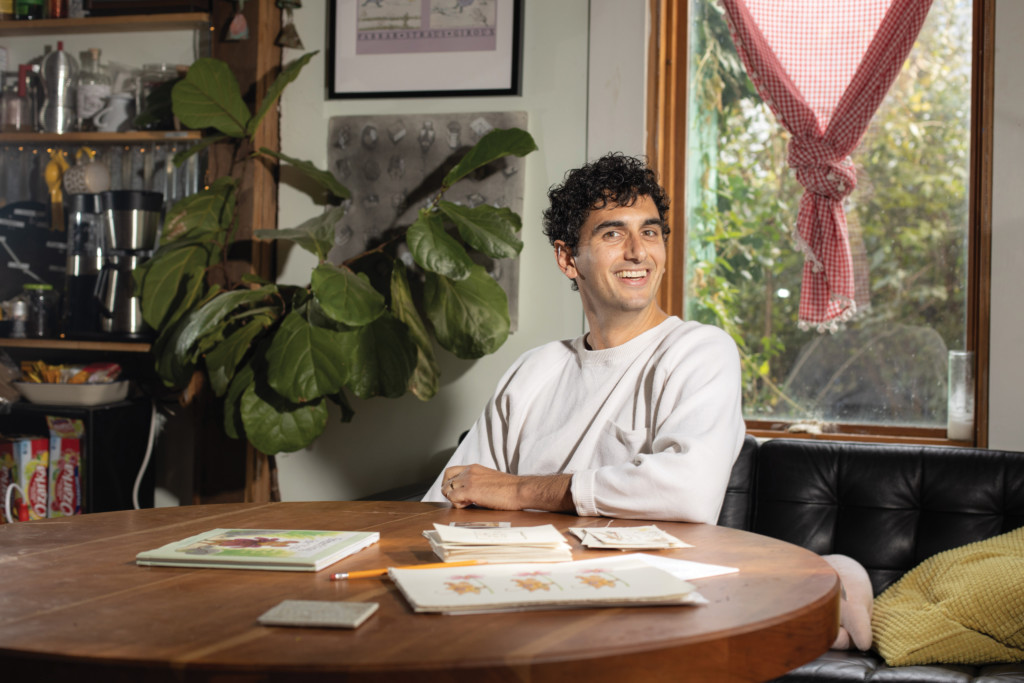 It was Deb Pettid, co-owner of the long beloved (and now closed) Brookside children’s bookstore the Reading Reptile, that gave Charlie Mylie the idea for the name Pop Up Charlie.

This was six years ago now. Mylie was a recent Kansas City Art Institute graduate, working a landscaping job, trying to figure out what to do next.

“At the time, I was drawing a lot,” Mylie says, “and [my boss] was like, ‘You love to draw—you should just go, like, draw for people at the bank or something like that.’ And I was like, ‘OK.’”

Mylie got a meeting with Missouri Bank and asked them if he could become their artist-in-residence. Somehow, the bank said yes. So Mylie started showing up at events around town and creating on-the-spot ink and watercolor drawings of whatever people asked for. Early on, he stopped by the Reading Reptile and told Pettid about his general idea, to which she said: “So, you’re like a pop-up Charlie?”

“That’s the story that I tell myself,” Mylie says. “That’s the myth.”

Pettid says she was immediately attracted to Mylie’s curiosity and kindness.

“He was a magnet to both kids and adults,” she says of watching him work at her bookstore. “I had never seen anyone draw like him. He literally can draw anything, but more importantly engages each person and adds humor, satire and cleverness to their request. I loved watching it.”

Pop Up Charlie was a hit. Mylie—who often arrived at his pop-ups wearing a gold, conical, wizard’s hat—had a talent for transforming people’s requests into witty, playful, strange, and occasionally tender drawings. It led to a variety of new opportunities, like becoming artist-in-residence at the architecture firm BNIM, designing a mural for Swope Health Center, and illustrating a Snickers ad.

“I saw how much incredible actual literature is made for children,” Mylie says, “and I wanted to participate in that.”

“I’ve had a chance to do those things because someone saw me doing Pop Up Charlie and was like, ‘Um, can you do this?’” He blinks rapidly. “‘Yeah, sure.’ And I just pretend like I have an idea.”

Mylie went on tour as Pop Up Charlie in 2017, with the goal of drawing in all 50 states. He brought along no personal means of transportation and ended up (through hitchhiking and other bits of happenstance) making it to 26 states in all. For a few years, he’d been thinking about book ideas, but nothing was sticking. But while on tour, a sturdy idea swirled into focus. He drew a story of a mouse trying to find just the right gift to bring to another mouse friend who is sick. Mylie sent the drawings home to his now-wife, Sondy. These drawings, of a mouse venturing out into a hard world and thinking of a loved one at home, became Something for You—Mylie’s first children’s book, published November 26.

Mylie is settled back in Kansas City these days, with Sondy, their new child (Misha), and a job at the Rabbit Hole, the forthcoming Northland interactive children’s book museum being spearheaded by Pettid and her Reading Reptile partner Pete Cowdin. He says meeting Pettid and Cowdin and spending time at their old bookshop was pivotal to his path in this direction.

“I wanted to write a kids’ book shortly after spending time in the Reading Reptile,” Mylie says. “I one hundred percent owe my excitement and education about children’s books to Pete and Deb, to the Reading Reptile and the Rabbit Hole.” 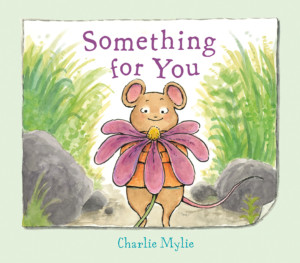 Mylie’s book, Something for You

A breakthrough moment was stumbling upon William Steig’s Abel’s Island, a 1976 children’s book about a mouse stranded on an island.

“There’s all these, like, existential, almost mystical asides that appear in a lot of his [Steig’s] books,” Mylie says. “That was my gateway drug. I saw how much incredible actual literature is made for children, and I wanted to participate in that.”

“It is really well-paced, gentle, has visual depth and surprise, has a nice arc and thoughtful ending,” she says. “I also know this is Charlie’s first book, and each that follows is going to be better and better. He has many styles of illustration, ideas and also a bit of a dark side, which I look forward to seeing in his work. Mostly, there is a lot of depth and promise. He has the potential to be a picture book maker at the highest level.”

After landing an agent (and experiencing the ego boost that comes from receiving three offers for your debut book), Mylie signed a two-book deal with the prestigious publishing house Farrar, Straus and Giroux, the same publisher that put out Steig’s work. (As we sit talking—Misha grinning on Mylie’s lap—a framed Steig poster is visible on the dining room wall above Mylie’s head.) His second book, Anything For You, is in his editor’s hands and will see release in 2020. And he’s already busy pitching a third. “I have five ideas in my head all the time,” Mylie says.

The pop-up thing informed Mylie’s approach to books in both good ways and bad, he says.

“I have skills such as being able to ideate and draw quickly, to not become too attached, to try to find humor and accessibility,” Mylie says, adding with a laugh, “But I wasn’t prepared for revision. For constructive criticism.”

Still, the local support system and the “little micro relationships” that grew out of Mylie’s public drawing experiences have been invaluable, he says.

“Pop Up Charlie let me stay tapped into my community,” he says. “People were like ‘Go, go, go, go,’ you know, the entire way. And that absolutely helped. Having all of those advocates has been the only way that anything has ever happened for me, artistically.”

Storytime reading of Something For You and live drawings by Mylie at the Kansas City Public Library.
Tuesday, December 10, 10 a.m.
Central branch, 14 W. 10th.

Categories: Culture
Tags: Charlie Mylie, Pop Up Charlie, Something for You, the rabbit hole