On Broadway Deli, a ‘mostly Jewish deli for a mostly not-Jewish city’ 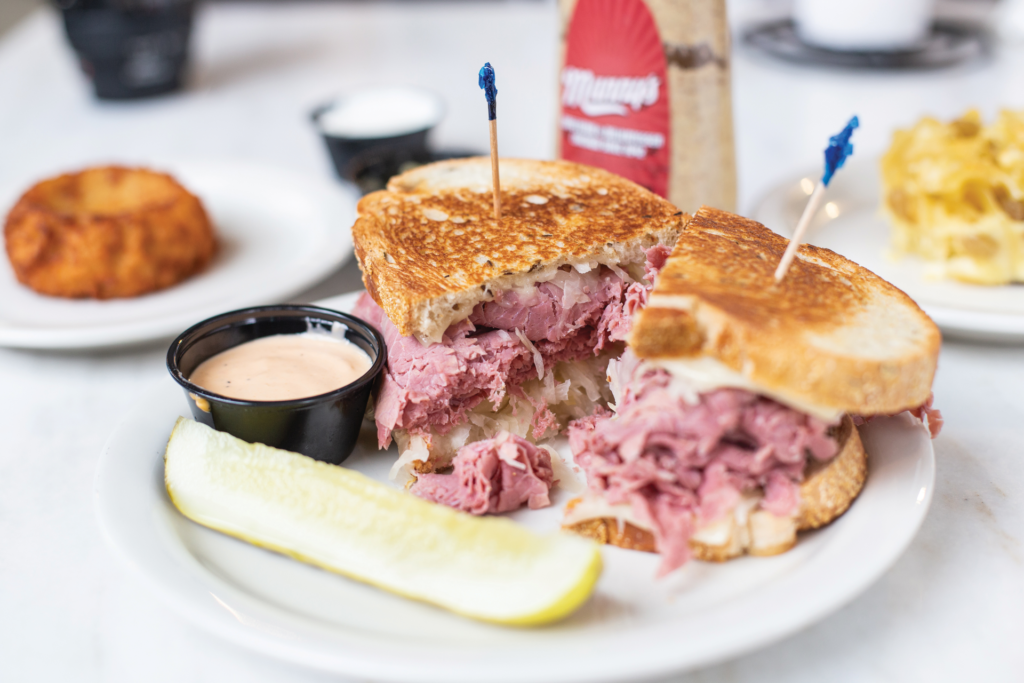 Ever since Broadway Deli opened in May, I’ve been hearing the same question from well-intentioned foodies: “Is it authentic?”

Questions about authenticity rank near the bottom of the utility pile for me. Ask: Is it delicious? Ask: Is it executed with care? Ask: Will I dream-drool that I’m being chased by a giant, sexy pastrami monster weeks after my visit? (Answers: mostly, sometimes, and no comment.)

But Kansas City’s conspicuous lack of a Jewish deli made those questions of authenticity loom large — more often, among goys who fetishize the idea of the One True Rye.

Let owner Bill Fromm be your guide. Fromm, who founded the marketing and ad agency Barkley, has been dreaming about this deli for over 50 years, and he doesn’t seem too concerned about the bonafides. The deli’s website bears the tagline, “A mostly Jewish deli for a mostly not Jewish city.” And while the meat is pedigreed — Fromm gets his briskets shipped in from Manny’s Cafeteria & Delicatessen, a 76-year old institution in Chicago’s South Loop — it ain’t glatt kosher. You can order a pastrami Reuben with gooey Swiss cheese sleazed minxily into the meat’s folds (and should, provided you don’t observe kashrut).

A good pastrami sandwich has been tough to find in town since the unfortunate closing of Speak Sandwiches on 25th Street. Broadway’s version is good enough to keep the cravings at bay. The meat’s piled high in blousey ruffles, and if you give your sandwich a little “good boy” pat (not that I’d know), juices glisten at the edges like dew on a lily. The meat itself is salty, tangy, and meltingly moist. The only downside? Broadway’s pastrami is thin-shaved, not thick-sliced, meaning fewer fatty bites and fewer stripes of that crusty brown spice bark.

Still, I loved “The Original,” which caps a tower of thin pastrami with coleslaw and Thousand Island dressing. The toppings were balanced and daintily applied, though the soft rye bread was a bit overtaxed. If a messy sandwich is a dealbreaker, go with the Reuben instead. It’s one of the few sandwiches here that are toasted, a crucial step that helps the bread stand up to all that beef.

Lightly toasting the bread would go a long way toward nudging sandwiches with weepier meats across the finish line. I wanted to love the Big Sonia, which wedges double-digit layers of soft, tomato-red salami between one slice of rye and one slice of pumpernickel. The flavors were promising, but the spongey bread was impotent in the face of the warm salami’s grease. And for $10 and two ingredients, I expected a home run.

Now seems like a good time to ponder a couple other questions: Is the deli consistent? And, perhaps more importantly, is it a good value?

It depends on the dish — and the day.

Broadway still has some kinks to work out in both consistency and pricing. Nowhere is that better exemplified than in its sides, which range from the meh to the magnificent. Take the latkes, a compulsory deli order and a reasonable $2 accompaniment to any sandwich. Broadway’s latkes aren’t the shredded potato pancakes you might be picturing. Here, they’re more like croquettes, smooth-bellied and chubby as hockey pucks. The innards are soft and evenly textured — more mashed potato, less hashbrown — providing a nice contrast to the crisp outer crunch.

But the quality seemed to vary wildly from day to day. On a weekday lunch visit, my latke was perfectly crisp and fresh, the platonic ideal of “golden brown.” On a later weekend visit, it arrived tough and chewy, as though it had hung out under a heat lamp (or in a fryer basket) too long.

The dark horse side to beat is the noodle kugel, a sweet, eggy custard stippled with plump, golden raisins and crowned with a frill of chewy, crisp-edged egg noodles. Broadway’s version is shaped like a wee cupcake, inspiring in me some latent maternal urge to protect it (mostly from rival forks). It’s also plain delicious: rich without tasting too eggy, subtly sweet but not cloying to keep the focus on the parade of textures. The kugel isn’t technically a dessert, but it’s a fine way to end a meal.

The only true disappointment was the knish, which hit the table tough-skinned and bland. I sawed fruitlessly at its smooth shell for a minute or two before abandoning propriety and rending it apart with my graceless hands. Manmangling that knish was one of the more embarrassing ordeals of my life, and I say this as someone who was once dumped on prom night. The reward for my struggle was a stormcloud of gluey potato rimmed in an unappetizingly gray layer of raw dough. 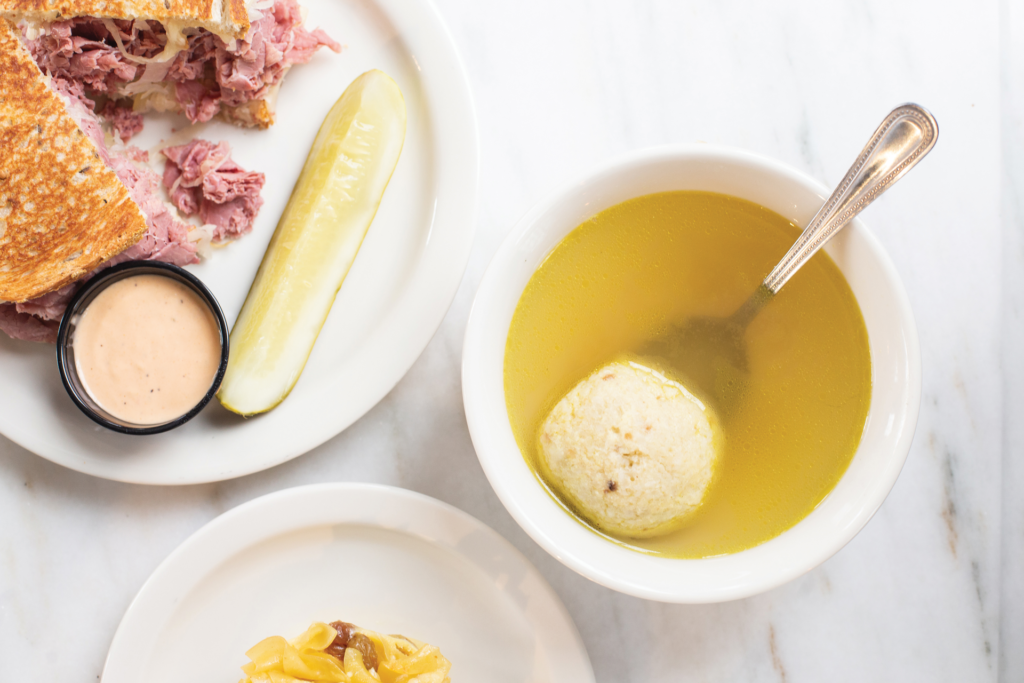 The matzo-ball soup was better. The broth was clean-tasting, and the matzo was tender and light. Still, one medium-sized dough ball does not a $5 soup make. File under “good, but not great.”

If matzo-ball soup is nonnegotiable for you, the Broadway Combo is a more frugal way to sample it. For $10, you can get half of any basic sandwich, a cup of soup, and a side.

Choose the whitefish salad for your half-sandwich. The whitefish was a brand-new menu item when I tried it, but it already has the makings of a best-seller. The ratio of fish to herbs to condiments is mathematically perfect — the mixture is as loose as it can be without falling apart, and each bite balances the fish’s dusky, smoky saltiness with a creamy brightness and vegetal crunch. The result is simultaneously light and rich, good enough to lap from a spoon.

Let us now praise famous dill: the pickle spear, which comes with every combo and sandwich, isn’t an afterthought. These are Manny’s spears, husky boys with a satisfying crunch and a cold snap of half-sour, full-dill flavor.

For now, I’d recommend visiting after 10:30, when the deli starts slinging sandwiches. Although Broadway opens early for breakfast — 7 a.m. on weekdays — the morning menu isn’t as solid. If you can’t wait, order the #9 — a warm, toasted bagel with schmear served alongside three scrolls of lox, a dusting of capers, and some impractically thick ovals of cucumber. When I tried it, the Everything bagel was fresh and chewy, with a soft but sturdy crumb. And the lox was thick and generously portioned enough to make the $12 price tag palatable.

Skip the matzo brei, here a chewy egg pancake sliced into strips and lightly doused with maple syrup. The dish was bland and underbrowned, and I suspected the “maple syrup” had married into the Butterworth family. Though it pains me to say this, skip the breakfast burritos, too. The lox burrito was just…OK. The scrambled eggs were tender and politely flecked with lox, but the slender, bare-bones roll-up wasn’t worth $9.

The upside? Breakfast is a less crowded affair. The lines can get long during weekday lunch service (call ahead or order online if you’re short on time). Still, service is generally swift. Broadway Deli has embraced a fast-casual model: order at the register, port a pager to your table, and then collect your tray from the bar when the pager buzzes. At least, that’s how it works in theory. On three of my four visits, an employee dropped the plates on my table before my pager went off. On two occasions, my meal was delivered by Fromm himself. 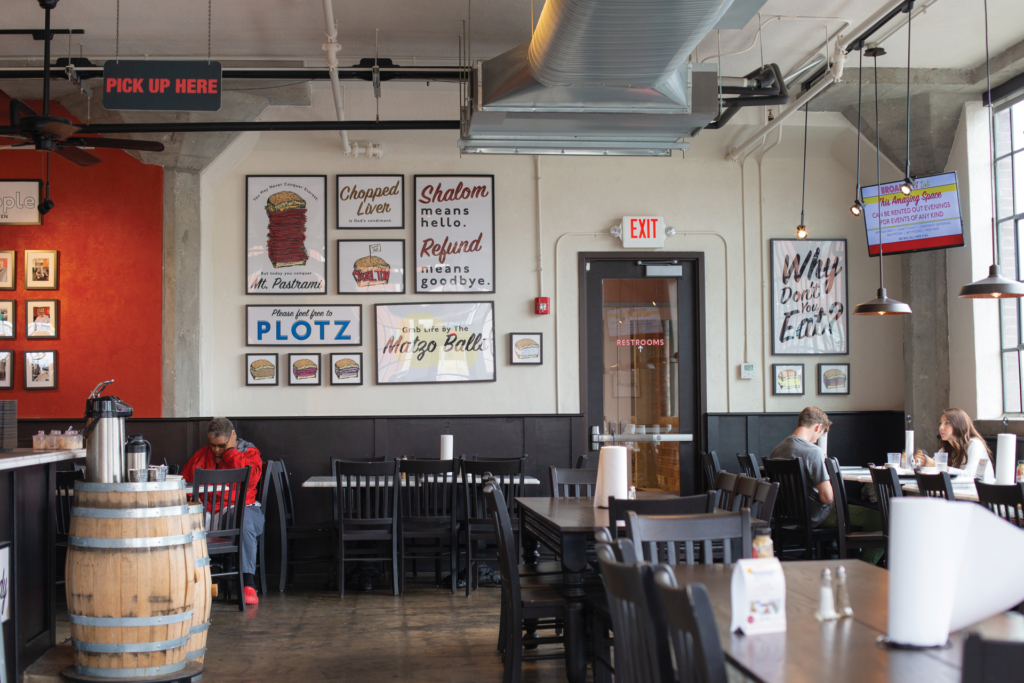 The ambience is exactly what you’d hope for from a neighborhood deli. The space feels lively even when it’s half-full, and the open bar and kitchen mean you can camp out on a stool and watch the mesmerizing hula sway of an automatic slicer shaving down a brisket.

I’ve always loved 2101 Broadway, a high-ceilinged space with booming acoustics that once housed Pezzettino Italian Deli & Market. The woodwork’s been painted a sleek black since that predecessor decamped, but a lot of the old infrastructure remains. The tables are still cool white marble, and arched glass deli cases still form a horseshoe around the central bar.

Another constant: the kvetching about parking. True enough, spots are scarce in the neighborhood. For what it’s worth, I made four visits at varying times and never had trouble finding street parking right in front of the deli on northbound Broadway. Plus, the deli validates parking for the 22nd Street garage.

And if you have to park a couple blocks away, is working off some of that pastrami such a bad thing? It may not be convenient — and it may not be cheap — but when Broadway Deli is good, it’s worth any logistical and financial headache.

Order the pastrami Reuben on rye and grab a side of the noodle kugel for an inauthentic dessert.