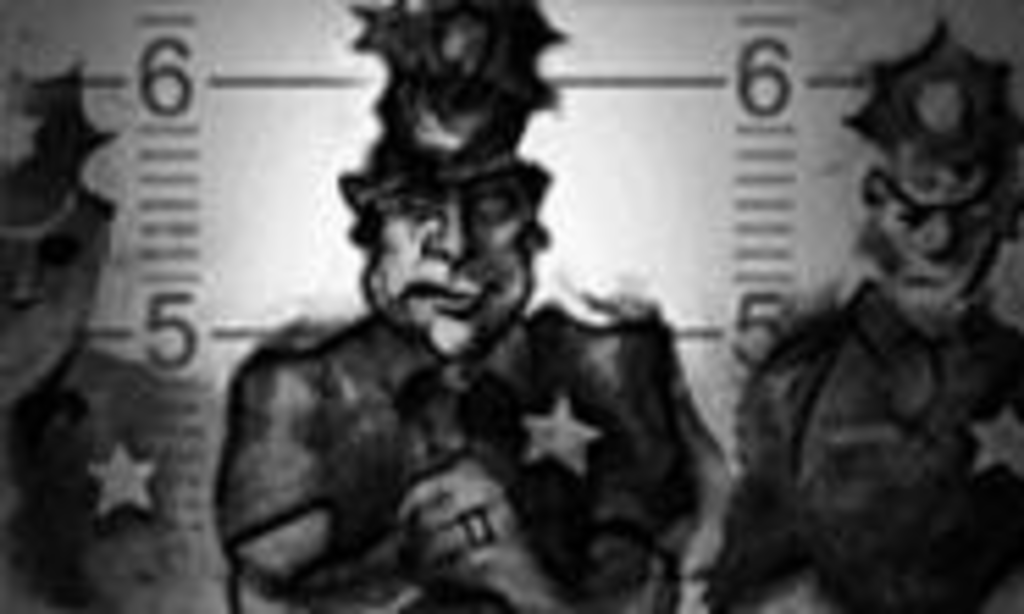 On September 29, Olathe police arrested Robert Michael Tyler, a Johnson County sheriff’s deputy, for domestic battery. Then they booked him into the jail where he still works as a guard.

Olathe officers had gone to Tyler’s home that night in response to a complaint about a noisy altercation. Inside the house, they found his wife, Brenda, crying, with scrapes and blood on her elbow and knee. At first, she denied that anything was wrong. When officers questioned her, however, she told them that Tyler had “snapped” during an argument.

“I’m going to beat the fucking shit out of you!” he’d warned his wife, according to a police officer’s affidavit filed with the Johnson County district attorney. Tyler reportedly grabbed his wife by the arms and pushed her down on a couch, then held her in a bear hug and walked her down the hallway. “You’re going to get what you deserve,” he told her, according to the officer’s affidavit. During the scuffle, Brenda fell to the floor.

The district attorney’s office charged Tyler with domestic battery, a misdemeanor. But Tyler would never face a jury trial and wouldn’t have to worry about losing his job. Instead, the Johnson County district attorney’s office put Tyler’s prosecution on hold, giving him probation and sending him to diversion, a one-year program that includes an anger-management course and counseling.

A month after Tyler was arrested for assaulting his wife, Sheriff John Foster welcomed him back to work. Tyler had been on paid administrative leave, and Foster took no disciplinary action against him.

Tyler wasn’t the first Johnson County sheriff’s deputy to be arrested for domestic violence. Nor was he the first to be granted diversion.

In October 2000, Dannie Ray Lowe was charged with disorderly conduct when, during an argument with his wife, he “jumped up, grabbed her around the neck and drug her to the floor,” according to court records. Lowe was charged with disorderly conduct, a misdemeanor. A month later, the district attorney’s office ordered Lowe into a twelve-month diversion program. He returned quietly to work with no discipline taken by then-Sheriff Fred Allenbrand. (Foster was elected sheriff in November 2000 and didn’t take office until January 2001.)

In July 2001, Overland Park police officers arrested another sheriff’s deputy, John Mott, after his wife called 911. During an argument, Mott had begun to yell and curse at her and throw things, according to the court file.

“Ms. Mott stated that her husband began to throw items into the kitchen from the hallway outside their bedroom,” a police officer wrote in his affidavit. “She was afraid that her husband was going to have a heart attack because he was so upset, and she called police because she was unable to calm him down.”

Mott didn’t hit her, his wife told police. But in the house, officers found a damaged iron, torn miniblinds, two shattered glass bowls and broken compact-disc cases strewn about. They arrested Mott and charged him with criminal damage to property under $500 and disorderly conduct.

Ten days later, the district attorney’s office admitted Mott to a six-month diversion program, where he underwent drug and alcohol testing and counseling as well as anger-management counseling. Mott returned from paid administrative leave to his deputy position without facing any other disciplinary action.

Two of the five deputies arrested for domestic-violence offenses since 2000 did not receive diversion. Stephen M. Ruth and Christianne Croan, who were dating each other, got into an argument in May 2001. Both were charged with domestic battery and placed on paid administrative leave while awaiting trial. In January of this year, a jury acquitted Croan. Ruth’s charge was dismissed when he pleaded guilty to disorderly conduct in August. He was sentenced to twelve months’ probation. Neither still works at the sheriff’s office; Foster would not tell the Pitch whether Croan and Ruth were fired or had resigned.

Tyler and Lowe did not return the Pitch‘s phone calls. Mott declined to comment.

Sheriff’s deputies get no special treatment from his office, Morrison says.

“We really struggle with that question if somebody is a law-enforcement officer,” Morrison says. “We sure don’t want to treat them any differently than anybody else. The ongoing discussion here is do you treat them harsher? They’re definitely not treated any harsher than the general public. We try to approach that on a case-by-case basis and try to be fair.”

“Just because they’re deputies doesn’t mean they don’t still have rights,” Foster says. “They get arrested and get booked in just like anybody else. They’re assimilated back in the workforce just like any other citizen.”

But a deputy isn’t just like any other citizen, according to the Johnson County sheriff’s own civil-service regulations. He or she is “the most conspicuous representative of county government” and must not embarrass the sheriff’s office with “conduct unbecoming a deputy.”

The regulations note that a deputy is “criticized far more severely than comparable conduct of persons in other walks of life. A deputy at all times must conduct him or herself in a manner which does not bring discredit upon the deputy, the department or the county.”

The Sheriff’s Department is the largest law-enforcement agency in Johnson County. Of its 540 employees, about 400 are sworn officers. Deputies cannot carry guns inside the jail, but all are issued firearms and pepper spray and trained to use them. Deputies are also taught hand-to-hand combat and defense techniques.

Had a deputy been tried and convicted rather than sent to diversion, he could not have remained employed as a deputy. “If [they’d been] convicted, they’d be gone,” admits Foster, who says that federal statutes ban those convicted of some domestic-violence offenses from possessing firearms.

Of 1,760 domestic-violence complaints filed with the Johnson County district attorney’s office last year, a third of the offenders were granted diversion, Morrison says. The diversion program has been in place for about five years and is designed to give a second chance to first-time offenders who have committed low-level felonies or misdemeanors.

“We make a genuine effort to hold them all accountable, to avoid any special treatment on our behalf,” Ornburn says. If Tyler had used a firearm against his wife or misused his position, he might not have been granted diversion, Ornburn says. But “anybody in this situation [like] Mr. Tyler’s, assuming there aren’t any red flags in his file, would likely be recommended for diversion.”

Foster defends his decision not to discipline his officers for conduct unbecoming a deputy. They deserve a second chance, he says.

“I don’t have to put anybody on administrative leave. That’s a choice with me,” Foster says. “They’re people, and they’re dealt with through the system. If a deputy is diverted and they complete diversion, then they’re eligible to go back to work.”

None of the three deputies granted diversion is patrolling county roads. Mott and Tyler guard inmates at the jail. Lowe mans the security checkpoint at the entrance to the Johnson County Courthouse.