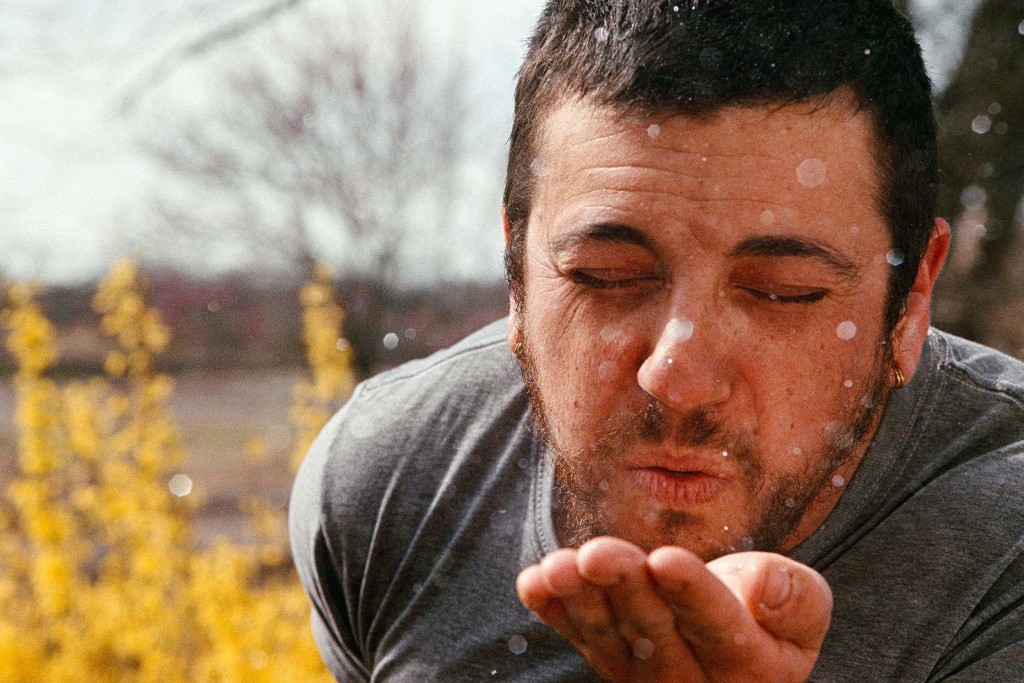 A wood-burning stove glows nightly and hisses out an occasional ember, akin to the edible glitter flecks floating across spilled sunlight on the copper bar-top. At dusk, the candles begin dripping down glass bottles, the last table is seated, the chatter of the cocktail shaker slows, the breeze trickles through the hand-cranked windows, and the first wine is poured. A Mount Fishtail Sauvignon Blanc flows into glasses to marry a Green Goddess salad dressed with bacon, feta, cold sweet potato, and heirloom nasturtiums.

The salad alone is an impressive culinary feat, but it’s just the introduction.

Chef Rozz and Shantel Grace met in 2017 when Rozz joined the crew as the general manager at Ramen Bowls. Bowls is Grace’s popular Mass Street noodle spot in Lawrence inspired by her years spent living between the Midwest and Honolulu.

Saltwell Farm Kitchen came to life in spring 2021 when the two ventured out to forage for native ingredients, an activity that would become the foundation for their next project. A rural drive on the Clinton Lake backroads led them to stumble upon the dilapidated 1856 McKinzie Farmstead adjacent to Rock Creek in Overbrook, Kansas.

Rozz and Grace have always been a dream factory. Even among the ruins, their vision of an inclusive, intimate, immersive, and accessible farm-to-table fine dining experience became instantly clear. 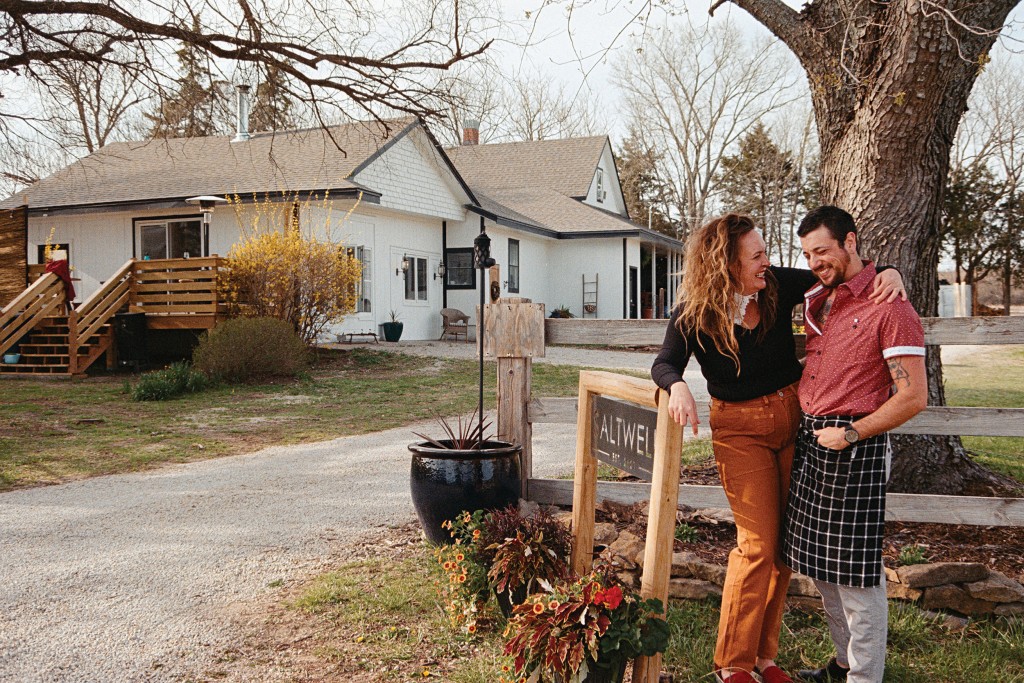 Despite the efforts of other interested locals, the duo’s offer for the as-is property was accepted. They hired a team of contractors, camped on the land, and immediately began building a habitable home and dining space. Within a month, they even had Wi-Fi.

The once-barren garage is now a rustic parlor and an extension of Rozz and Grace’s own living room where the couple spends weeknights eating pizza and watching Netflix with Grace’s three kids.

On weekends, they invite outside guests to get up close and personal with the land while honoring the character in all things repurposed. Visitors make the trek on Friday and Saturday nights to savor an eight-course chef’s dinner, complete with optional wine pairings and premium cocktails.

A free-range ecosystem of goats, bunnies, baby cows, chickens, helmeted guineafowl, kittens, puppies, feral herbs, wildflowers, and mushrooms all give the farm its fairytale charm yet to be seen anywhere else on the outskirts of Kansas City.

The list of spectacles grows with every visit, the menu changes weekly, and no two dinners are ever the same. 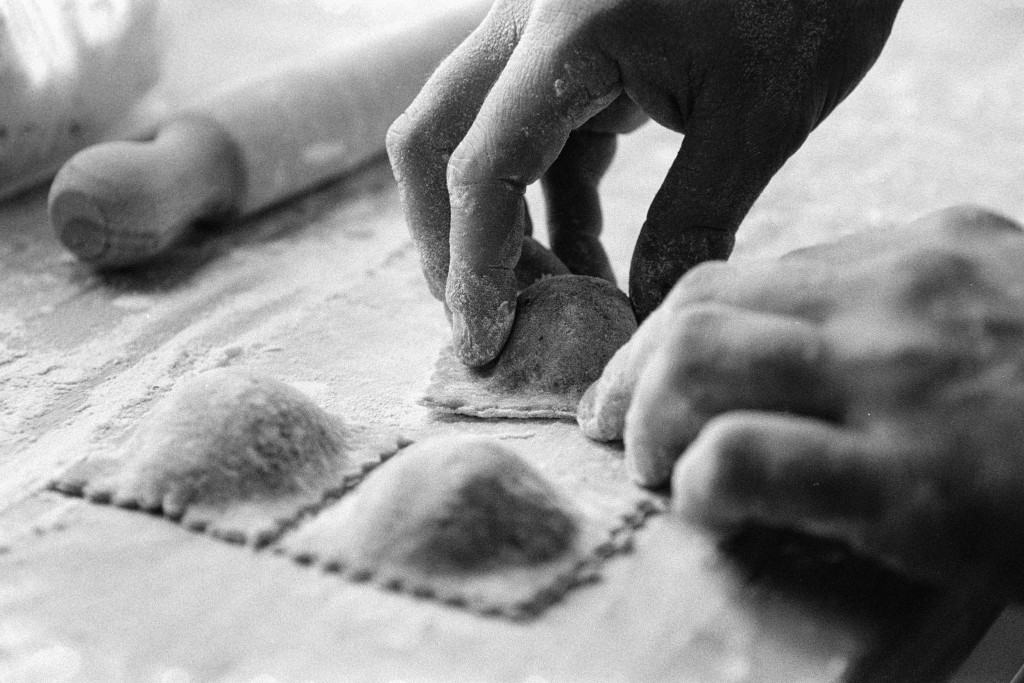 Rozz was born and raised in Illinois and is of Italian and Hungarian descent. He moved to Lawrence in 2009 to pursue the hospitality management program at Johnson County Community College after a short stint in magazine journalism at Columbia College Chicago.

While it seems like a sudden shift, Rozz’s time spent in the Windy City wasn’t for nothing. Columbia College is well known for nurturing queerness and became a safe space for him to establish roots in his identity, start his transition, and fully realize his craft. He spent his early 20s working various food service jobs before discovering an affordable and accomplished program at JCCC.

“My mom always told me that I should marry a man who could cook, so I became the man who could cook,” says Rozz of his late mother, Delaina Petrozz, who influenced his passion for elevated comfort food and can be seen by candlelight during every dinner service.

The self-proclaimed “sparkle trans baby” has been previously nominated for “Best Chef of Lawrence” and took first place in the 2018 Douglas County Chef’s Challenge. In 2019, he participated in the Chef’s Table: Family Recipes event sponsored by Just Foods with a dish that was an homage to his mother’s Hungarian goulash.

He wants to make sure every plate is as authentic as he strives to be and is a respectful nod to his upbringing.

From the playlist to the plate, everything is hand-selected. Everything is practical. Between composting and late-night scraps for Sawyer (Saltwell’s senior farm dog definitely living his best life), nothing goes to waste.

Rozz and Grace recently partnered with Crum’s Heirlooms, among other local farmers, to inspire their ever-evolving menu around harvests with excess in “ugly” crops in need of love or specialty produce that is not commonly found in major grocery stores.

The culinary playfulness of Chef Rozz can be seen at any given moment as he holds a mason jar of Chardonnay or a cosmic and glittery rose gold Negroni while simultaneously hand-rolling pasta for a smoked wild turkey ravioli, torching parmesan over crusty sourdough for an asparagus-watercress soup, plucking violets to garnish a sous vide ribeye and truffle mashed potatoes, assembling a cocoa pizzelle with [yes, more] edible glitter and 23k gold leaf, or harvesting cattail to test drive a fried amuse-bouche. 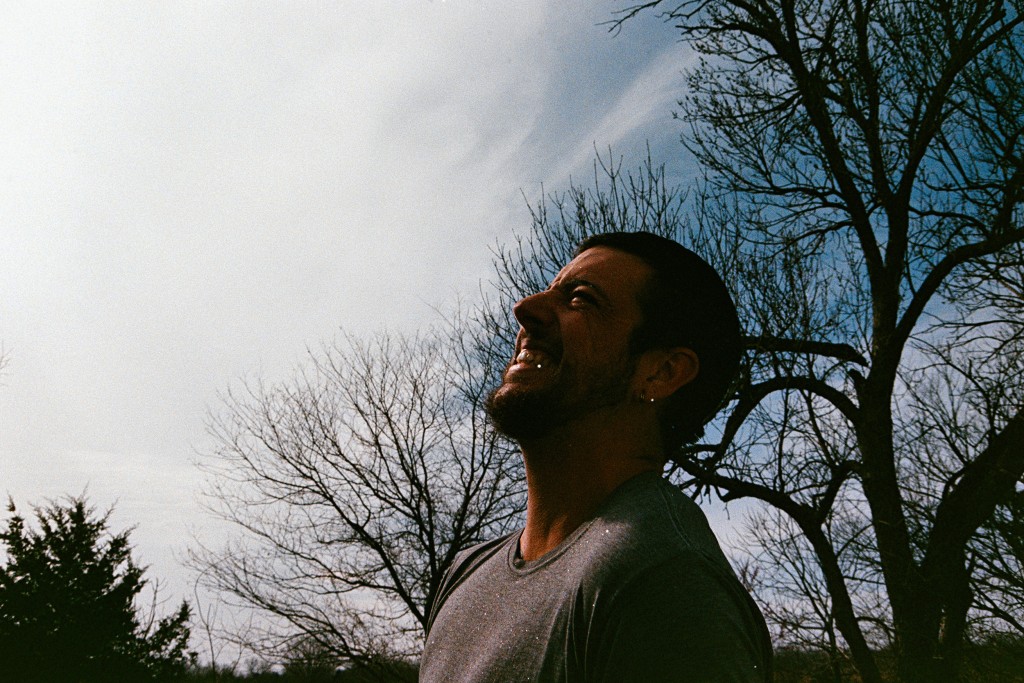 Saltwell is a chosen family. The rest of the staff could say the same. Though small, the bond is evident as helping hands rotate and duties are shared. High fives and shoulder rubs are exchanged. Inside jokes and belly laughs shake the stacked heirloom teacups. The love is palpable, and the enthusiasm is contagious—rare industry finds in a post-pandemic world of DoorDash and restaurant fatigue.

Rozz and Grace make it a point during their welcoming toast every Friday and Saturday to introduce the staff to the guests and share a collective moment of gratitude. The two command the room during Golden Hour, and Grace makes her way down the lineup to showcase the unique talents each person brings to the table. In essence, she paints the family portrait.

Jim King is a career educator, dishwasher, greeter, and resident comedian on the farm. As the team huddles on the front porch for fresh air and a group taster of the soup course, King is the first to break the blissful silence: “It’s like pigs at the trough.”

Everyone chokes in an effort to contain the laughter and avoid spilling on their personalized dress code ranging from sleek and all-black, to jaunty hand-stitched frocks, to King’s own crisp white button-up and custom tie boasting a collage of his grandson Nathan Friedman’s face.

Friedman is a 14-year-old hospitality protégé who has been helping at the farm, along with his grandpa, since day one. He affirms that all dishes are coming back to the kitchen licked clean and reports on the overall “vibe” in the parlor. With a smirk, he lends an audible pat on the back to Rozz. He is a well-mannered young man with an intense love for food and charisma that could earn a five-star review. 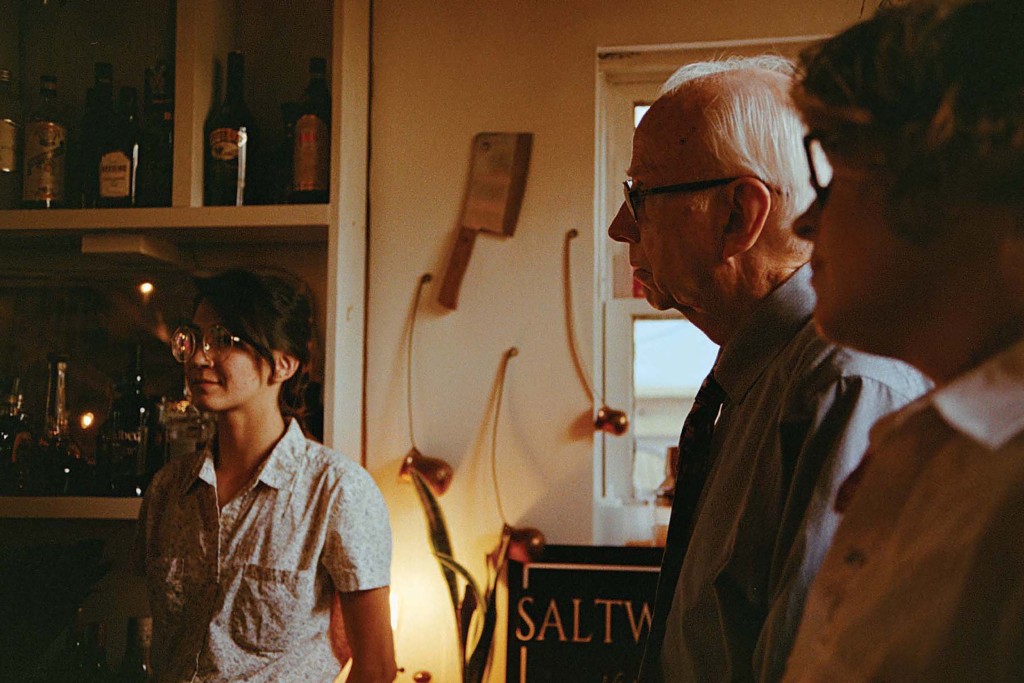 The staff at Saltwell Farm Kitchen. // Photo by Steph Castor

Sheilah Tackett was an original Ramen Bowls employee. She came to the farm in the winter following some cancelled weekend plans on her way up from her parents’ farm in southern Kansas (thanks, Covid). She texted Grace on a whim and worked through dinner service that same night.

Her go-with-the-flow nature made her a perfect addition to the Saltwell roster, as she’s been parked next to the Hen Den (aka the chicken coop) and helping out weekly ever since. Tackett manages day-to-day administrative tasks and meticulously polishes and arranges the parlor to assert the fine dining standards that mesh with the “come as you are” mentality, making the experience approachable for any occasion.

Kate Frick is a household name for cocktail connoisseurs. Former owner of the iconic Myers Hotel Bar in Tonganoxie, Kansas, Frick curated the farm’s bar menu. Her ingredients are just as whimsical as the names for her concoctions—The Gayfeather is a lavender, green tea, and mezcal-based libation, just to name one—and it’s no surprise to hear someone say, “That’s the best Manhattan I’ve ever had.”

Frick also works as a farmer for Crum’s Heirlooms on weekdays and helps deliver the haul to Saltwell.

Rozz’s father, Gary Petrozz, is a retired railroad employee and moved to Kansas to be closer to his son. He keeps to himself and visits during the day to mow the grass, patch roofs, and fix problems the farm didn’t it know it had.

None of the magic would exist without Grace, who is the mastermind behind it all. When they say there is glitter everywhere at the farm, they really mean it. Grace approaches her work as a poet. Her personality is effervescent.

She self-edits and revises industry protocol to ensure that her employees, friends, and community feel safe, seen, and provided for. She exchanges narratives with neighbors and invites strangers to join in. She has built a home with Rozz that thoughtfully redefines hospitality as we know it and sends guests home with bellies full of wine and wanderlust.

“What better way to facilitate this experience and have everyone in the community come together than to do it in our own home,” says Rozz as he smiles at Grace and raises his Negroni in conclusion. “Our main goal here is just to make everyone feel as special as possible because you’re all sparkly, and glittery, and worth it. We wouldn’t be doing this if it wasn’t for all of you. The space is yours for the night. We don’t turn tables for a reason.” 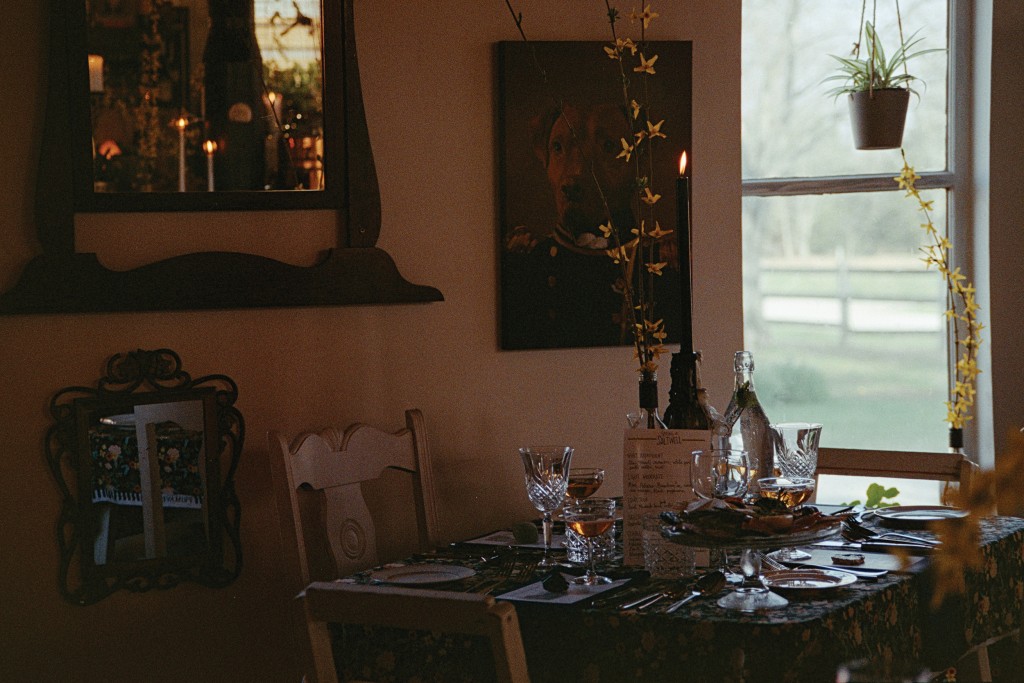 “You know, if you would have told me that I’d leave the Southside of Chicago for an abandoned farm in Kansas, I would have called you crazy,” says Rozz as he dumps watermelon rinds into the goat pen.

From expanding the parlor to include outdoor seating (weather permitting) with live music and cocktail hours, to planting a “goth” garden of rare black herbs and flowers, to installing an industrial kitchen while their “goat guys” Daniel and Dave restore the barn for private events—Rozz and Grace have big plans in store.

Just one year in the making, Saltwell has indeed carefully translated feelings of falling in love, self-discovery, and getting lost into an intentional and sensory experience. At the end of dinner, everyone wraps up at their own pace.

It’s not unusual for the juxtaposition of state politicians, renowned painters, magicians, and even a celebrity national champion NCAA basketball coach to be seen at the farm. They mingle with tables, peruse the art on the walls made by queer folks and women of color, flip through poetry books, and tinker around on piano keys. They bypass differences. They dig out their phones for a momentary selfie. They order another drink.

They are hesitant to leave but don’t hesitate to get back on the books.

Saltwell Farm Kitchen is located at 214 North 800 Road, Overbrook, KS 66542. They are open for dinner service on Fridays and Saturdays as well as for private events. To make a reservation, visit http://www.saltwellfarmkitchen.com