Michelle Pfeiffer communes with a cat to diminishing returns. 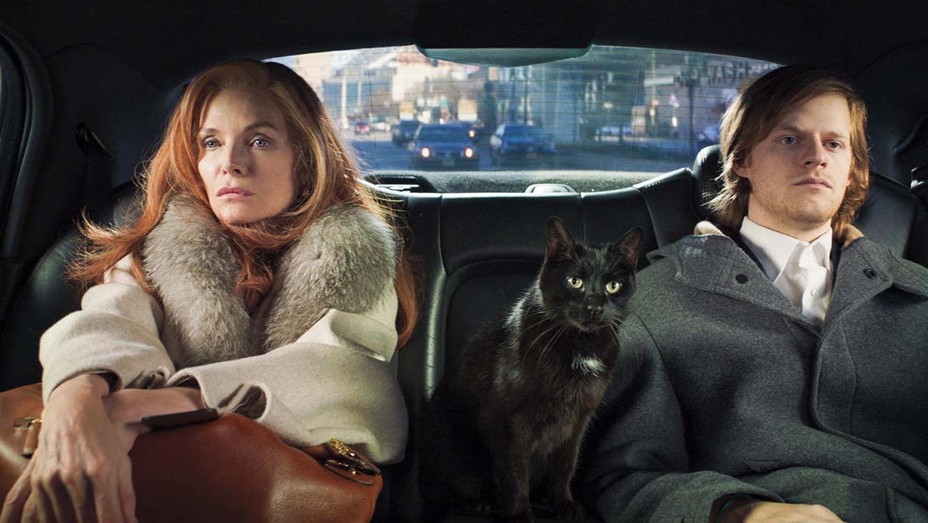 At least French Exit lets us watch Michelle Pfeiffer conduct a séance for a cat. Forays into the supernatural are an unexpectedly refreshing element of Azazel Jacobs’ caustic new comedy, which tries and ultimately fails to effectively walk a thin tightrope between deadpan absurdism and earnest character studies, which Jacobs captured so well in 2017’s The Lovers.

When we first meet lead character Frances Price (Pfeiffer), the wealthy New York socialite has recently lost her husband, but still made time to go away for the weekend before reporting his death to authorities. She swans in to pull her pre-teen son Malcolm out of boarding school seemingly to parent him for the first time, but one dismissive look implies that Frances will not be forced to deal with the fallout of this strange occurrence in any real way.

Jacobs then cuts to 20 years later, when Frances has managed to blow through the family’s colossal fortune anyway. “My plan was to die before the money ran out, but I kept—and keep—not dying,” she laments upon hearing the news. This supposed upheaval of her posh lifestyle only exacerbates her clear suicidal ideations. The stunted, now adult Malcolm (Lucas Hedges) isn’t faring much better and is hesitant to even tell his mother about his fed-up new fiancée, Susan (Imogen Poots).

The codependent pair decides to “downsize.” For them, that means selling their possessions and setting off with their adorable black cat, Small Frank, to stay in a friend’s (Susan Coyne) stunning Parisian apartment as they languish over next steps—or, in Frances’ case, what could be her final days.

French Exit works best as a showcase for Pfeiffer, who expertly sinks her teeth into her meatiest role in years. She plays Frances with a bemused haughtiness that feels like a more lowkey, carefully concentrated dose of the camp that she brought to films like Stardust and Mother!. Whether she’s setting a café table on fire when a waiter ignores her, or telling her son that she enjoys the sound of scraping knives together in the dark, this is a woman who feels entitled to command the room even as she slips into destructive inner turmoil.

There’s also an undeniable vulnerability beneath Frances’ icy exterior that’s slowly teased out over the course of the film, as she lets go of her fortune, grudges, and thorny reputation. Her underlying weariness proves to be a source of pathos, particularly as she confronts her grief and anger towards her late husband, who, it turns out, has been with her all along.

Small Frank, it turns out, supposedly houses the spirit of Frances’ late husband (voiced by Tracy Letts). When the cat runs away, what little plot that “French Exit” kicks into gear. It also makes the film begin to unravel as it assembles an unnecessarily large ensemble of eccentric characters, each one contributing less than the last.

Because French Exit works best when focusing on its antiheroine’s darkly comedic brushes with her own mortality, its halfhearted attempts at Wes Anderson-esque drollness feel like detours away from the main attraction. Even the supernatural twist concerning Small Frank, which is a clever way of addressing how a loved one’s loss can haunt you, tends to get glossed over for another unwanted hangout scene.

It doesn’t help that the mother-son relationship between Frances and Malcolm is underdeveloped, no matter what charming chemistry Pfeiffer and Hedges may have. Hedges lends a juvenile sweetness to Malcolm, but by the closing scene it’s still unclear why he’s so blindly loyal to a woman who often only takes a fleeting interest in his life.

At least part of the problem can be traced back to screenwriter Patrick deWitt, who adapted French Exit from his own best-selling 2018 novel of the same name. The melancholy monologues and affected witticisms of deWitt’s prose mesh much less effectively here than they do on the page.

Instead, the film’s casually bizarre world feels too inconsistent, its comedy too self-congratulatory, and its forays from quirk into sincerity too wobbly in a year where contemporary viewers are less likely to sympathize with the one percent’s foibles than ever. There are surely things to admire about French Exit, but if you’re looking for a movie involving Michelle Pfeiffer and cats, you’d be better off watching Batman Returns.

Shithouse: Boy gets girl, boy loses girl because he is toxic