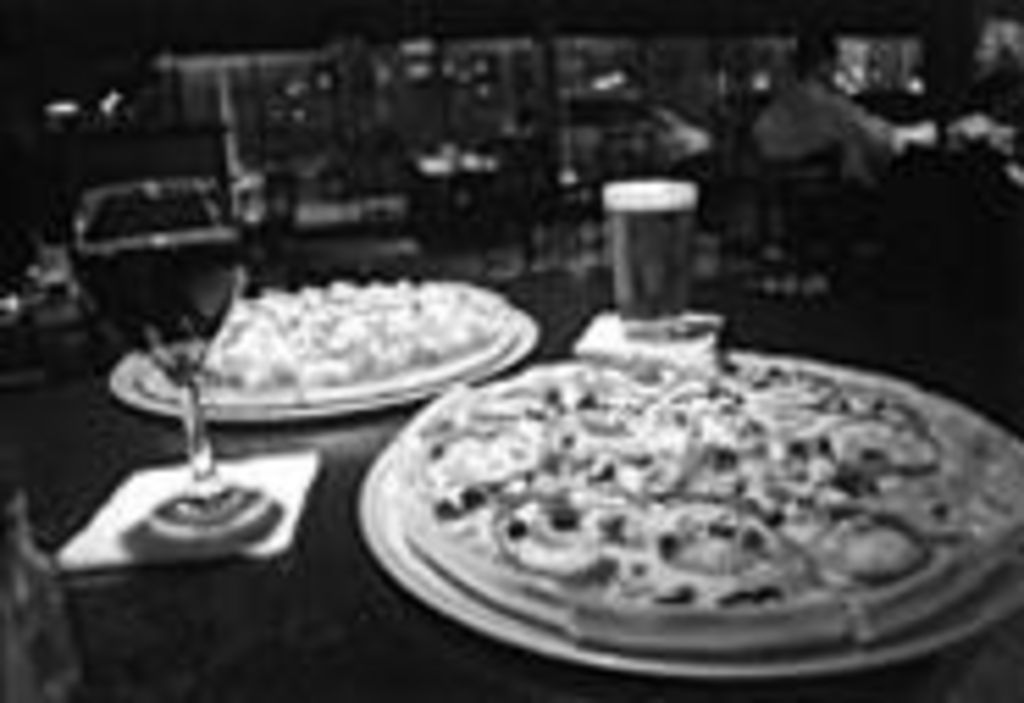 I nearly fell off my chair the other night at Kelso’s Northtown. I was sitting at a table on the smoky bar side of the restaurant, looking at the menu and explaining various entrées to my dinner companion, Victor, a visiting journalist from Lugansk, Ukraine. Victor, sipping a Grey Goose martini and puffing on a Danish cigarette, was admiring a pretty waitress teetering through the dining room on boots with formidable spike heels.

“This place reminds me of a bar in Lugansk,” Victor said in halting English.

At first, I was willing to bet an order of Kelso’s fried cannelloni bites (which reminded Victor of a deep-fried Ukrainian delicacy called chebureck) that it was the first time anyone had compared any venue in North Kansas City to a tavern in the former Soviet Union. But when I looked around the three-month-old restaurant and bar — dark and sexy, with artfully painted walls (nicotine-stain yellow, Mediterranean red), framed European prints and hanging scarlet-glass light fixtures — I could see that Kelso’s was not your typical Midwestern joint. And by North Kansas City standards, it might truly be as exotic as a saloon in the Ukraine.

“The difference,” Victor said, “is that in the Ukraine, the music would be much louder. And very bad.”

At Kelso’s Northtown, the piped-in music is very good and as eclectic a mix as the two-page menu — bouncy reggae one minute, Natalie Merchant the next, and Bonnie Raitt after that. The menu ranges from gourmet pizza to roasted chicken, from a hefty slab of lasagna to a New Orleans-style muffuletta sandwich.

The eleven pizza offerings, which delighted me, are no surprise to Northland dwellers. Former professional baseball player Bill Kelso opened his first pizza joint in Liberty in 1969 (it lasted fifteen years) and a second in Metro North Mall in 1975. When his 36-year-old son, Jeff, also a retired California Angels player, decided he wanted to open a restaurant of his own (with his older sister Kelly as business partner), he made, by his own admission, a risky decision. He had passed the corner storefront at 300 Armour Road (previously occupied by a camera shop) dozens of times and thought it might be a good place for a sit-down restaurant and lounge. The popular Chappell’s (a combination sports bar and casual dining restaurant) is across the street, but there are few other places to get a sit-down dinner in a predominantly commercial neighborhood.

“We knew lunch business would be very good because of all the businesses around here,” Kelso says. “But we weren’t sure how we would do during the night hours. It could have been a disaster, because not many people live around here. So we took baby steps at first. No advertising, no marketing.”

But many diners — myself included — stumbled onto Kelso’s simply by driving past it on the way to another restaurant. The restaurant’s façade is a bank of picture windows, the view inside half-hidden by black venetian blinds. It all looks particularly alluring at night; those flashes of red neon and scarlet glass within twinkle through the slatted windows in, a friend told me later, “a very inviting way.”

“We want to go there!” wailed my friends Bob and Patsy, catching a fast glimpse of those Kelso’s windows on a night I was driving to a different Northland restaurant. “It looks more fun!”

Some nights are more fun than others (the place is absolutely packed with noisy, lusty singles on Friday evenings), though I’ve learned to love the more mellow weeknights, when the dining room is relatively quiet and many of the tables are occupied by young families with well-behaved children, a few older diners, and even some alternative couples. On one Thursday night I had dinner with my friend Lou Jane, who quickly spotted, at two different tables, a gay couple in matching cashmere sweaters eating salads and two chubby lesbians sharing a pizza.

“Northland homosexuals!” she whispered. “Who knew?”

Not provincial city dwellers like us, obviously, who are still amazed by the changes taking place in the fast-growing suburbs on the northern banks of the Missouri River. I don’t know if I’m ready to call downtown North Kansas City cosmopolitan yet (though the French-style Le Monde Bakery is just up the street from Kelso’s), but things are certainly looking up. It wasn’t all that long ago that the best-known restaurant in this part of town was the lovable but lowbrow Gold Buffet.

Kelso’s raises the culinary bar a tiny bit. Although six of the pizza choices are called “gourmet,” little else on the menu pretends to be anything but standard bistro fare, most of it made with top-notch ingredients. There are exceptions, though, like the aforementioned cannelloni bites, a prefab product that goes from freezer to fryer and tastes like any lump of fried ravioli, despite one dimpled waiter’s gushing endorsement. Stick with the stuff actually made in Kelso’s kitchen, like a tasty sampler platter, which includes a finely diced olive salad, a marinated “bruschetta mix” (chopped tomatoes and purple onion) and a creamy artichoke-and-cream-cheese concoction, all of which can be scooped up with buttery, toasted bagel slices.

Lou Jane thought the sampler was a delicious complement to a deftly shaken martini (the signature cocktail here) and that both the dimly lit dining room and bar had the cachet of many southtown boîtes. But it was our dark-eyed, dark-haired waitress who made that particular night’s dinner memorable. Smart and savvy, the willowy young hipster was “more attentive than most servers working on the Plaza,” Lou Jane said. After four dinners at Kelso’s, I can say that there’s not an ugly or lazy server in the crew. Ditto for broad-shouldered Jeff Kelso, who always looks as though he’s running bases around the dining room as he delivers plates from the kitchen or buses empty tables. Even in a sweat, he still looks like a cast member of The Bold and the Beautiful.

Most of the dishes are just as good-looking, including a juicy roasted half-chicken, a golden bird fragrant with rosemary and garlic, succulent and tender under a crispy amber skin, served alongside a mound of penne pasta in a decadent orange “prima rosa” sauce of thick cream splashed with tomato. The hand-tossed pizzas are no less sensual, with an abundance of meats and vegetables hidden under a thick blanket of bubbling melted cheese and oregano-scented tomato sauce. In tribute to the neighborhood, Kelso created the North Towner pizza, heaped with brawny slices of house-made meatballs; a pie called the Kitchen Sink buries mildly spiced sausage, Canadian bacon and lusciously oily pepperoni under all that molten mozzarella.

All the toppings on the Kitchen Sink pizza, including a handful of black olives, are piled onto a toasted Roma Bakery bun for Kelso’s most popular sandwich, the Gabrielwich. It’s a tasty mouthful, but it can’t hold a candle to the Burlington, which boasts layers and layers of thinly sliced roast beef, melted cheese and the restaurant’s own ranch dressing. I liked it so much that I insisted my Ukrainian pal, Victor, try one, too. “It tastes like America!” he said, washing it down with a long sip from an all-American martini.

The dessert menu at Kelso’s is currently in flux. Lou Jane and I shared a four-layer “strawberry torte” of sugary sponge cake slathered with pale-pink icing, imported from the Golden Boy factory on the Kansas side of town. But Jeff Kelso is negotiating with another corporate vendor to supply his desserts, perhaps a cinnamon cheesecake on a base of carrot cake, or maybe a chocolate creation of some kind. Nothing too plain, but nothing too fancy, either. After all, Kelso’s might remind one diner of a place in the Ukraine, but for everyone else, it’s still the heart of good old North Kansas City.