I know time has blended together for all of us by now, but believe it or not, it’s been about four months since COVID-19 precautions forced us to spend most of our time at home. By now, you probably feel like you’ve done most of the things on the pandemic checklist. You’ve made sourdough starter and tried Dalgona Coffee. You got really into growing your own vegetables, then got bummed out when the squirrels got to your produce first. You’ve read all the streaming recommendation articles (including our own) and watched every movie on the list.

Or have you? I’ve learned there’s nothing like social isolation to realize I no longer had an excuse to avoid watching all those movies I said I’d get to eventually, but never did. That means you don’t have an excuse either. This is an account of the blind spots—embarrassing and obscure alike—that I managed to fill over the last few months (there are still so many more, in case you think I’m trying to be self-righteous. I still haven’t seen Top Gun).

Try these recommendations to expand your viewing experiences, and maybe even take care of a few oversights of your own. 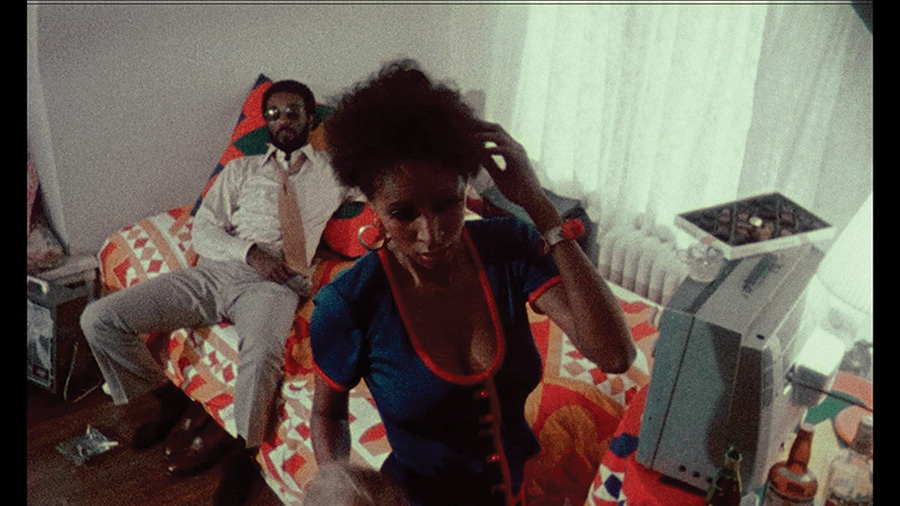 Ganja & Hess had been on my bucket list ever since watching the great documentary Horror Noire (also on Shudder), about the history of Black culture’s relationship to the genre. Bill Gunn’s arthouse vampire film was remade by Spike Lee in 2014 as Da Sweet Blood of Jesus. The original’s plot is loose, but focuses on an anthropologist, Dr. Hess Green (Night of the Living Dead’s Duane Jones), who develops an addiction to blood after he’s stabbed by his unstable assistant (Gunn) with an artifact. When the assistant’s wife, Ganja (Marlene Clark), comes looking for him, she and Green become lovers.

Gunn’s movie is wildly trippy. Ganja & Hess is part exploitation film, part horror movie, and part psychedelic art project, mixed with a bit of anthropology film. It’s almost impossible to follow, as much of the movie runs on dream logic. However, it also contains some incredible standout shots that should be in every aspiring filmmaker’s lexicon. It’s got a score by Sam Waymon (Nina Simone’s brother!) that you’ll want to own immediately. This movie also has maybe the coolest credit sequence I’ve seen in all of horror. Not all of Ganja & Hess works, but the parts that do are transcendent. 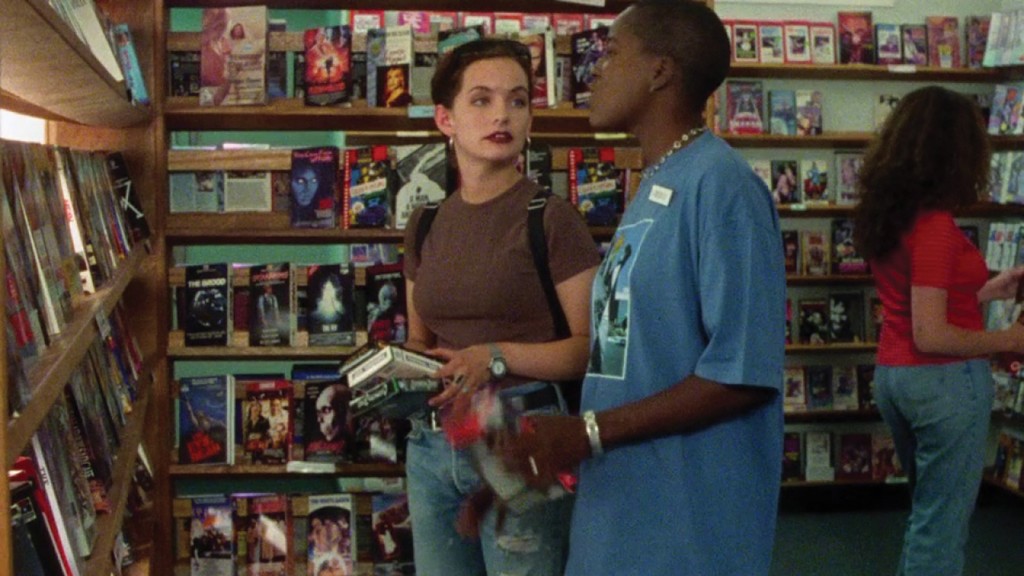 Cheryl Dunye’s The Watermelon Woman was among the selection of films by black filmmakers that Criterion Channel allowed free access to in June. Right now Dunye’s groundbreaking movie is back behind their paywall, but is accessible for free on Kanopy. The Watermelon Woman follows a Black lesbian filmmaker, Cheryl (played by Dunye), as she works on a documentary about a mysterious fictional Black actress who played a mammy in a classic Gone With the Wind-style drama. Cheryl pumps family, friends, and friends-of-friends for information alongside her friend Tamara (Valarie Walker) and girlfriend Diana (future American Psycho co-writer Guinevere Turner).

The Watermelon Woman is crammed with personality, a time capsule of a variety of mid-90s subcultures. The character of Cheryl is a thinly fictionalized version of Dunye herself, and the director used many of her friends and family in the movie. It’s clear Dunye has a lot of love for her hometown of Philadelphia, where the movie’s set. She lovingly pokes fun at her lesbian community (complete with awkward karaoke nights and micromanaged feminist volunteer-run reading rooms), and documents the changing face of her neighborhood with incredible detail. The film history aspect of The Watermelon Woman is compelling enough, but Cheryl, her family, and her friends’ shaggy, charming interactions are the real draw. 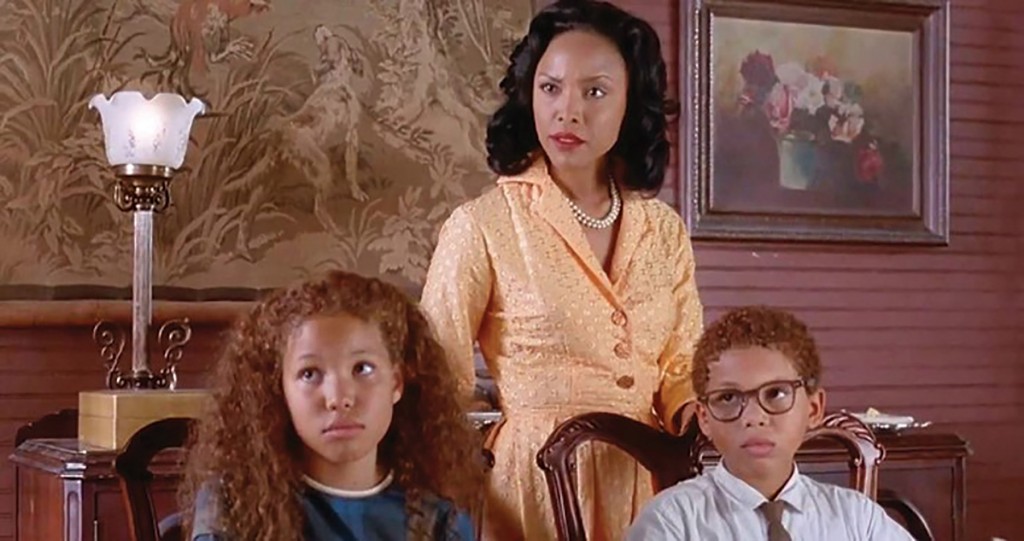 Most of these blind spot movies fall into the category of “films we don’t talk about that much but we should.” I vaguely recall Eve’s Bayou coming out in 1997, and heard it come up on the occasional movie podcast, but that’s about it. Having finally seen Eve’s Bayou, I can’t believe people aren’t yelling at the top of their lungs about how good this movie is every day of our collective existence.

Writer-director Kasi Lemmons’s first feature, about a black Louisiana family sitting on a powder keg of troubling secrets, is the whole package. It has an incredible script so steeped in family lore and magical realism that it feels like Toni Morrison could have written it. It has a cast that features, among others, Samuel L. Jackson, Diahann Carroll, and an 11-year-old Jurnee Smollett. The direction is gob-smackingly confident for someone making their first film, with a clear, rich vision. If you haven’t seen this movie by now, you’re forgiven (after all, it took me 23 years), but you should fix that immediately. 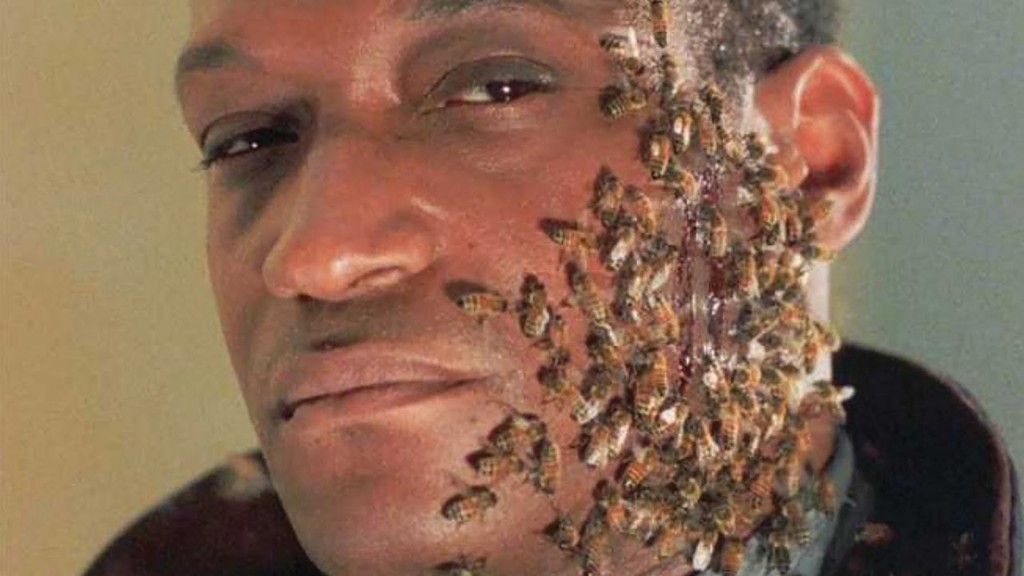 Like most folks, I’m excited for Nia DaCosta’s “spiritual sequel” to this 1992 Clive Barker adaptation (whenever we can finally see it). Until recently, though, I hadn’t actually watched the ‘92 Candyman. This feels especially silly considering I grew up in Chicago during the 90s. I was seven when the Cabrini-Green housing project, where most of the film takes place, was torn down.

I watched Candyman by myself, at night, with my back to a window, which was a terrible decision, because Candyman scared the pants off me. In keeping with all things Barker-related, it’s exceedingly gory and weirdly kinky. The villain’s origin is complex, his motives are nasty, and his methods are disturbingly carnal. That’s not to say I don’t recommend watching it—this is a fantastic movie. Candyman is a classic piece of urban gothic horror, made even more operatic by its too-classy-for-this-joint Philip Glass score. Candyman is freaky as hell, and I’m more interested than ever to see how DaCosta and Jordan Peele update the material. Just not on my own. 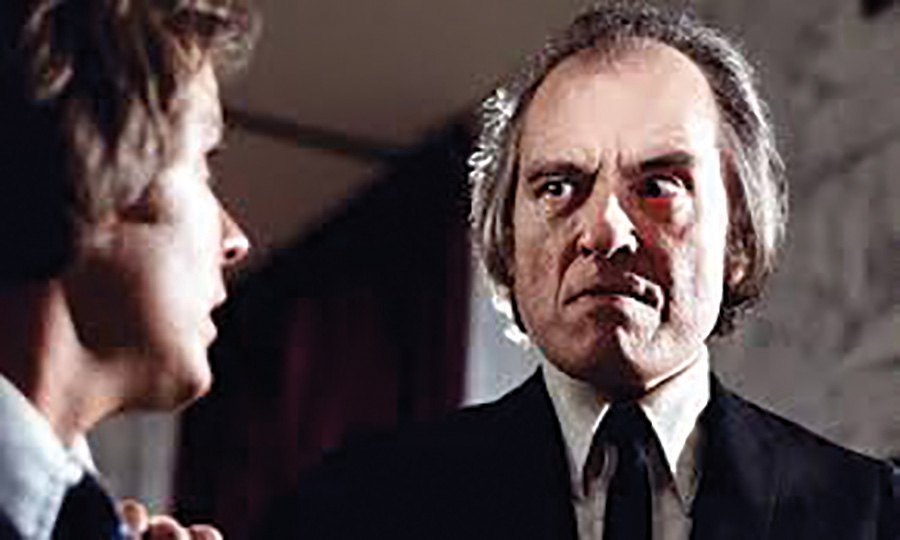 I’ve been a horror fan for years, but I didn’t grow up one. My movie bloodlust didn’t really hit until college. I’m assuming this is the reason I didn’t see Don Coscarelli’s Phantasm until my 30s, while many of my horror-loving friends have memories of watching it at an inappropriately young age. Phantasm, like Candyman, feels like a horror fundamental.

If you haven’t seen this yet, there’s really no time like the present. Phantasm will shake you out of your streaming coma with a squeal-inducing good time. The setup (streetwise kid versus creepy, secretive undertaker) feels like it comes straight out of a Goosebumps book. Where the plot goes from there, however, is almost impossible to describe. Phantasm’s graveyard screams echo down the corridors of modern horror, from the vintage aesthetic and sci-fi elements of Panos Cosmatos to the vintage cars and brotherly bonding of Supernatural. If you’re anything like me, it’ll become your new Halloween viewing tradition, sandwiched right between Return of the Living Dead and Evil Dead II on the itinerary. 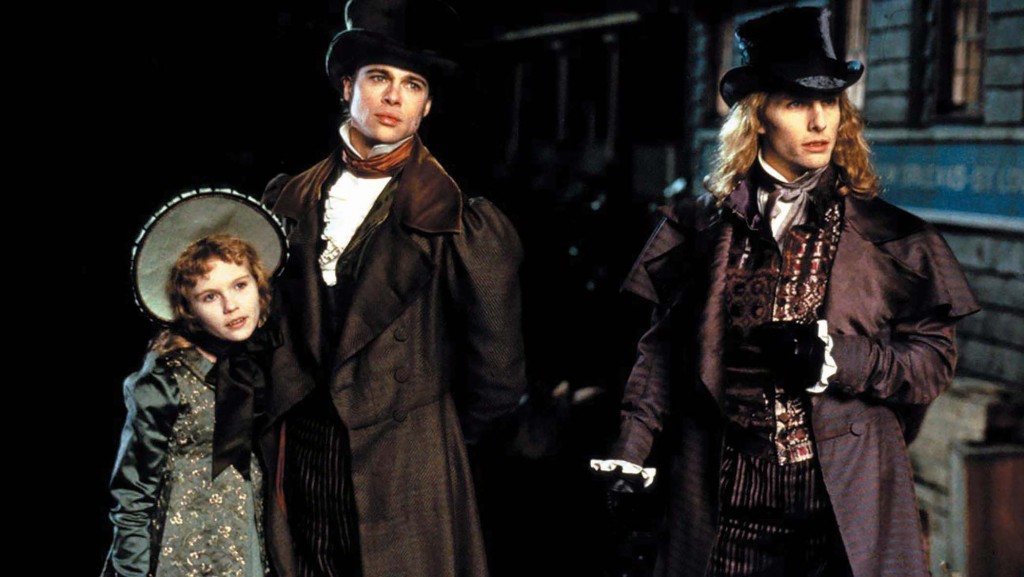 Interview with the Vampire (Amazon)

Like Eve’s Bayou, Interview with the Vampire feels like one of those 90s movies that just doesn’t get talked about much now. And again, after seeing it, I cannot believe it doesn’t get discussed more often. Neil Jordan’s sumptuous adaptation of Anne Rice’s novel, with an adaptation written by Rice herself, features four of the biggest male stars of the 90s—Tom Cruise, Brad Pitt, Antonio Banderas, and Christian Slater—three of whom make up the points of a very coded vampire love triangle. It feels a little insane that a studio released this movie in 1994. Watch it, if you haven’t. Watch it again if you have. 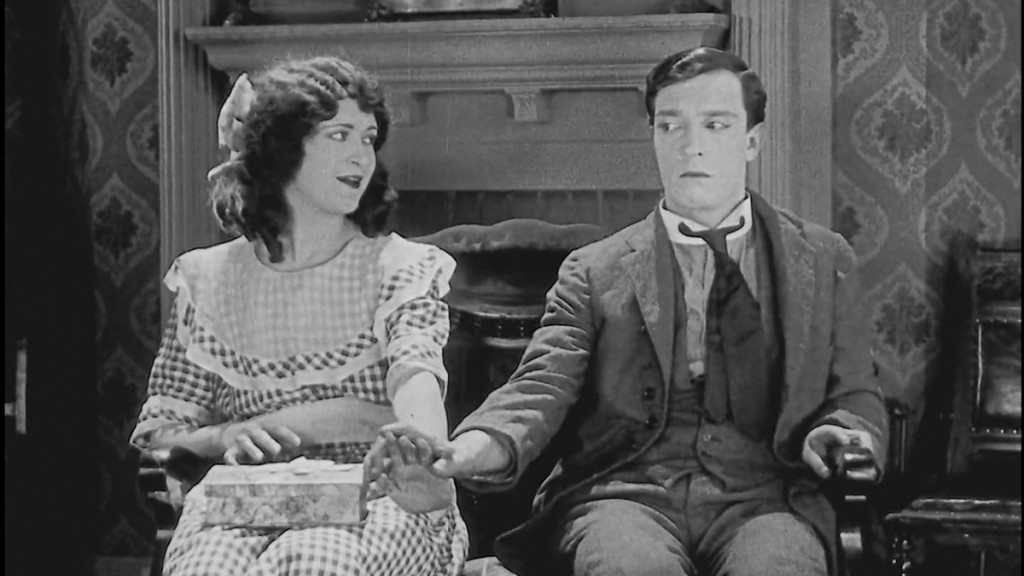 I’ve been meaning to broaden my Buster Keaton knowledge for years. This titan of silent film is a Kansan, after all, and the namesake of my cat (Buster Kitten). Not to mention, most of Keaton’s films are available to stream for free in some form or another. Clearly, it was time to fix this blind spot. I picked Sherlock Jr., in which Keaton plays a movie projectionist who dreams of being a detective, and is wrongly accused of stealing his girlfriend’s father’s pocket watch.

Many knowledgeable people will tell you that Keaton is a huge influence on contemporary filmmakers ranging from Wes Anderson to Jackie Chan. It takes precisely no time at all to notice that influence. The combination of stunning stunt work and broad slapstick draws a direct line to Chan, Mission: Impossible and even Mad Max: Fury Road. The way Keaton plays with visual depth appears throughout Anderson’s work, especially in The Grand Budapest Hotel. Mostly, though, Sherlock Jr. is 45 minutes of wall-to-wall cinema magic. It’s a quick hit of delight, which we all need right now. You’re not going anywhere, and the movie’s less than an hour. You know what to do. 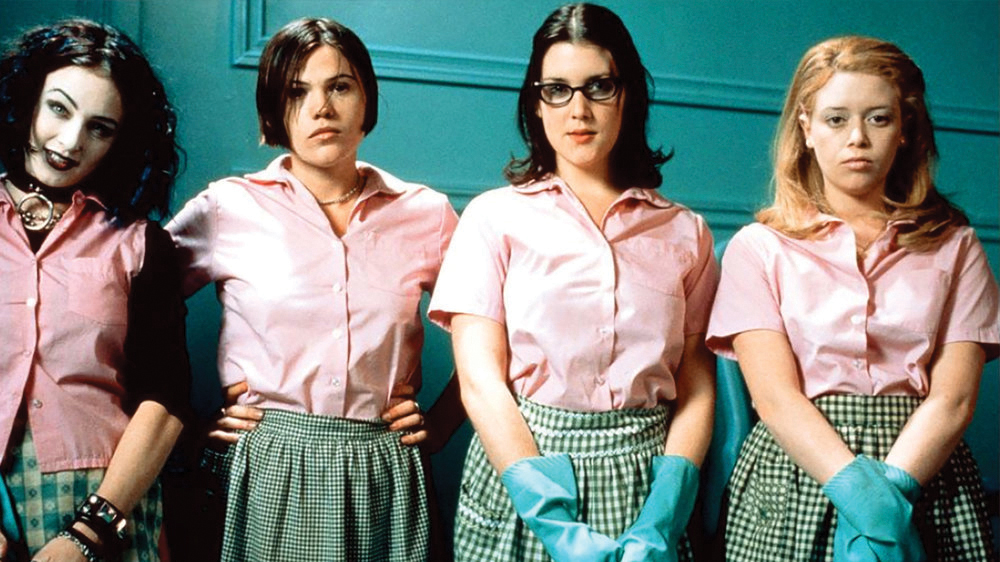 Jamie Babbitt’s But I’m a Cheerleader is a hallmark of queer cinema and a cult classic. Pride month may be over, but you can enjoy this John Waters-esque skewering of gay conversion therapy any time. I may have raised a quizzical eyebrow at rough-voiced bohemian Natasha Lyonne playing an apple-cheeked cheerleader named Megan, but I got over that hurdle soon enough. Watching a non-drag RuPaul hilariously fail to convert a bunch of young, gay teens (including Clea DuVall and Rufio from Hook!) was all I needed to fall in love with this goofy, surprisingly sincere movie. 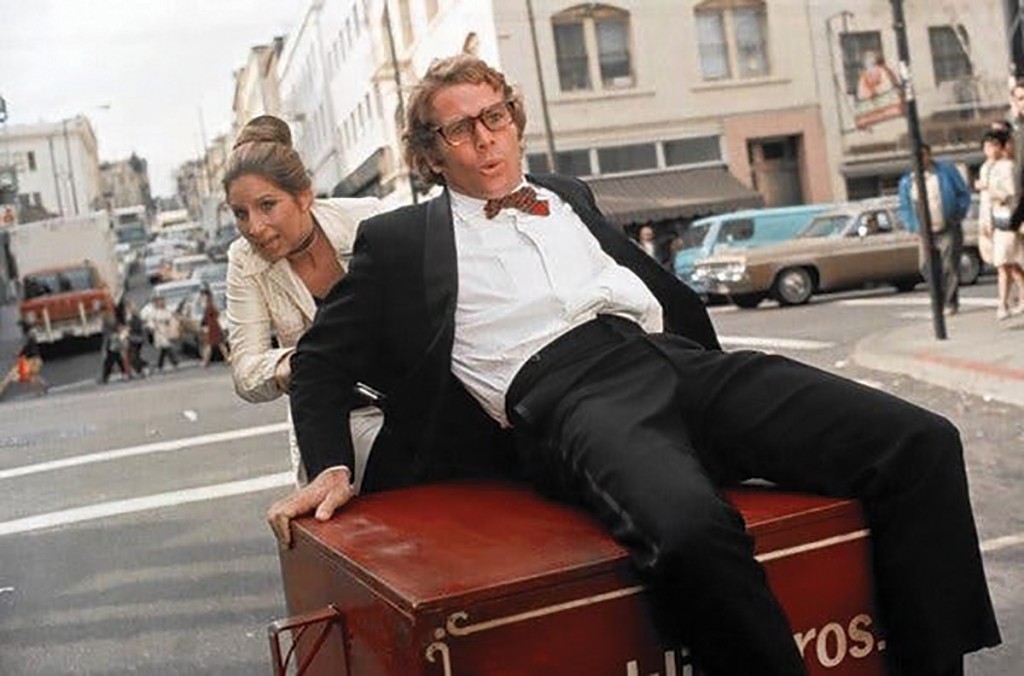 The last several months have been stressful for all of us. I’m a big believer in self-care, and for me, that often takes the form of movies that let me release anxious energy in the form of laughter. You know, like laughter yoga, but better.

If that’s the form your self-care takes, you deserve to experience the daffy 1972 screwball comedy What’s Up, Doc?, starring Barbra Streisand, Ryan O’Neal, and a raft of great 1970s comedic talent. I knew going in that What’s Up Doc? was good. I didn’t expect it to be so good that I actually felt cheated by life for not having watched it sooner. The movie is packed with goofy jokes, and every punchline makes a seismic landing. Streisand is wiley and smart and impeccably dressed. O’Neal is squirrelly and uptight. They’re great together. Don’t do what I did for years and deny yourself this pleasure any longer. Watch What’s Up, Doc? right now.