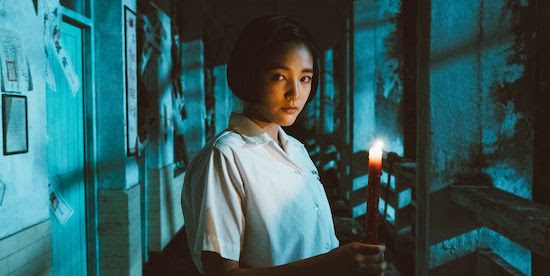 When I heard about the impending release of the Taiwanese film Detention, I dropped my laptop because I spazzed out too hard. My cats were upset by this. My laptop was also upset by this. And most accurately, I was just surprised by this.

While I was a film major in college, I assure you that this doesn’t come from a place of having an unusually high interest in Taiwanese cinema. Hell, foreign films in general have basically gone out the window for me in 2020, because I’ve lost the ability to pay attention to subtitles. This is to say that I wasn’t throwing a parade simply because this was made by a director that 99% of you haven’t heard of, or something along those lines. I assure you: I have become Film Dumb. I have no pretentious leg to stand on—nor have I for years.

Detention is the name of a 2011 horror comedy starring Dane Cook. That movie is good (see, I’m willing to praise the acting of Dane Cook. No pretense remains in my bones.) This film has nothing to do with that. Which… sure, we could’ve done with a sequel there. Another film for another day.

Detention (2020) is based on a video game of the same name, from 2017. Made by the indie studio Red Candles Games, the spooky and mysterious title dug into a complicated bit of Taiwan’s history. It was an endearing and engaging blend of terrifying scares but woven through a history lesson about a world event that, like many normie Americans, I barely knew anything about. It was a meaningful and lasting game experience because of how well it mashed-up effective genre tension with an emotional and personal education in a deeply complicated event.

The game was such a revelation, so knowing that a film was coming—that’s what caused the laptop drop. What I wouldn’t be prepared for was seeing a movie that, I say as a specialist in the field, is the best video game to movie adaptation of all time. This is truly an exceptional artistic achievement on so many levels.

Set in 1962, the film follows a middle school student dealing with both an inappropriate romance, but more pressingly Taiwan’s White Terror period. This was a nearly four-decade stretch of Martial Law imposed on Taiwan by the Chinese. Thousands were executed as the government sought to squash rebellion. And that’s exactly why our main character seeks out a secret rebellion organization within her own school.

But the further down the spiral this teen group descends, the further from the natural world they plummet. Soon, our cast is found in an otherworldly, twisted version of their familiar school, populated by demons, ghosts, monsters, and various things that defy explanation.

Detention pulls off that rare magic which Guillermo del Toro is able to trigger with films like Pan’s Labyrinth, wherein a national tragedy becomes host to a dark fairy tale, which both disconnects from the reality of the moment while somehow heightening the human tragedy.

Having seen this at a film fest, I’ve been dying to share this with everyone else. When I looked up release dates for America, I discovered that in early December… Netflix is releasing Detention. Not the movie version, but a Netflix original adaptation of the same source material—albeit as a limited television series. It looks to be exploring similar themes but from a completely original perspective.

I guess the point being that you’re going to enjoy a shocking amount of Detention content before year’s end. (I cannot wait. That’s why I keep dropping this laptop.)